I have a few silly little things that I've always wanted to do...but really haven't had the chance to. It's actually quite a long list, and I won't go into all the details because some of them are just so silly.

My first accomplished dream that I never thought I'd accomplish is that I had always wanted to portray Mary in the Nativity scene. The Christmas before Andrew got home (2004), I got to live that dream. They chose me to to be Mary. I was their second choice, but I was chosen nonetheless. I had always been a little bit bitter about not being Mary ever since my last year in primary when Heather Cameron was Mary and I was stuck being an angel. That wouldn't have been so terrible except that all the other angels were 4, so I was really just stuck pulling toddlers on and off the stage looking about as out of place as a giraffe, or so I felt.

My next accomplished goal is also a little random. I will perform in the "pink panther" dresses that got retired the year before I got on the high school dance team. For some reason I just love them and always wanted to wear them.

Once during the last few days of school, Alison let us get into the costumes and wear whatever we wanted. Kristina, Katie and I all elected to wear the pink panther dresses (apparently I am not alone in my dreams). 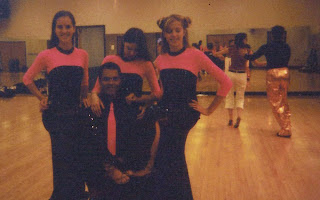 I'm wearing that dress to perform our foxtrot routine. Granted, I don't look quite as good in it now that I have a belly, but that's okay...I'm still wearing it.

Andrew and I were talking about so-called "unfulfilled fantasies" and thus our lists for the "perfect mate" came up. You know those lists that you always make in Young Women about all the qualities that you want in a husband and you most definitely put some really silly things on there like, "Must be 6' 3" and have brown eyes and normal thumbs."

Let's face it. Marriage is one big compromise, but that doesn't mean you have to settle for less than what you want. It just means that sometimes the definition of what you want changes a little.

Well, I had brown eyes on my list. Andrew doesn't have brown eyes but really that's okay because brown eyes aren't that important. Blue eyes are beautiful, too...I didn't settle for Andrew's blue eyes. I fell in love with them, compromising my ever having brown-eyed children (thanks to Malachi and Olivia for having brown eyes, now I suppose I'll just love my blue-eyed girl).

After telling Andrew this he said, "I always wanted someone with brown hair and blue eyes, just like you."

That was sweet, but seriously...there had to be something I wasn't from his list of perfection.

10 minutes of coaxing brought out, "Well, for some reason I really like alto better than soprano."

Now, I'm no alto. In fact, if they were auditioning for Mickey Mouse's voice, I'd probably get the part without much competition. But I can pretend to be an alto if it doesn't drop too many notes below middle C. Lately in church I've found myself switching to alto and then snuggling into Andrew's arms a little more. Like I really need to impress him that much...

I thought this post was over, but Andrew just came home from work and announced one of his unfulfilled fantasies that he will get to fulfill tomorrow!

Anyone who knows Andrew well knows that this translates into flip flops and shorts, but anyone walking outside our open window might wonder otherwise.
Posted by Nancy at 11:49 PM