I never thought I'd see the day my little brother willingly goes on a date. It must be a sign that he is getting older...oh, and maybe I am, too.

The boy who has said since he was 16 that:
is now asking a girl to, of all things, a dance.

I'm pretty happy about it, and I think he is, too. He actually seems excited about it. It is his Senior Prom, so I suppose it's high time he asked a girl out.

He needed a little help, but who doesn't? After all, the toilet was Karen's idea, not Andrew's (you do know about the toilet, right?)

This afternoon, after rudely awakening us from our mid-afternoon nap, Patrick came over so that we could go to Costco with him (we have a card, and he doesn't). After getting our fair share of free samples, we stormed the candy aisle and chose some kisses.

Then we went to go look at roses. Actually, only I went to look at roses, but I thought that Andrew and Patrick were with me, so it was really embarrassing when I turned to the man standing behind me and said, "What do you think, these or those?" He gave me a blank look and I quickly said, "Oh, I was talking to my brother...where is my brother?"

Luckily Patrick showed up so that I could again say, "These or those?" in front of the man, who I am sure now thinks that I am crazy.

We got home, after a quick stop at the drug store for poster paper, and commenced working on the poster (this was David's idea): 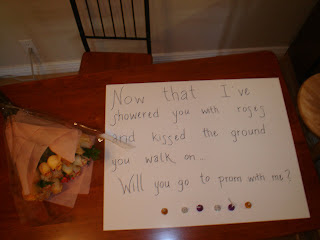 Obviously I wrote that and not Patrick. Hopefully Kendra doesn't think some girl is asking her to prom as a prank. She probably wouldn't think that because who would use 2 dozen roses on a prank? No one that I know of. They are very pretty roses, if I do say so myself. 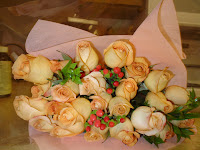 We then typed up Patrick's name, cut out the letters, opened some kisses and put the letters in them randomly so that she has to figure out who asked her out. Andrew then arranged them arbitrarily on the poster...none of us have any idea where the letters to his name are.

You might have noticed that Patrick's name has 7 letters and there are only 6 kisses. We kind of used a ligature (the ri) as one letter to throw her off his scent. Not that it will do much once she opens the candy and sees all the letters (including the "ri" that is connected), but before she does that she won't think Patrick asked her, see? It's brilliant, brilliant, brilliant!

It was kind of fun to help him ask a girl out to prom. See, here I am mocking him about never asking a girl out and, well, I never asked a boy out in high school... I never experienced the excitement of asking someone out and now I have to live vicariously through my little brother!

I only wish that I could be there to help him set up. He's planning on making a trail of kisses throughout the house, leading to the bathroom. Then he's going to somehow hang the roses in the shower (I'm not sure how that one is working out) and will put the poster on the shower wall.

Oh, well...I should go. I have a date with my husband. We're going for a walk. I did ask him to go on a walk with me, but I didn't make a poster or give him roses or candy. Maybe if I had, asking him would have been more exciting.
Posted by Nancy at 7:53 PM