Josie is doing well in school--despite all of her efforts to convince everyone that she isn't as smart as everyone else in our family, that we're all "perfect" and she's not, that she can't do what we can, she's gone and gotten herself a 3.94 GPA. She's even doing well in math.

She was over at our place on Friday to spend the day doing homework. One of her assignments was to make an edible model of an atom, more specifically a titanium atom. Josie made the cake by herself, but she poured it into a rectangular pan and was afraid she'd get docked points because it wasn't round, so we poured the batter into some round pans.

She was also upset about this because that meant that even more dishes were dirty. I guess I've passed the stage in my life where I think that pots and pans are hard to scrub. I hated cleaning pans when I was younger, so I can understand where she's coming from, but I've since become a huge fan of soaking things or washing them immediately (usually soaking). It makes scrubbing easy.

After the cake was baked and cooled came the fun part--decorating it. But first we had to figure out how many electrons were in each energy layer. This was rather difficult because titanium sometimes has 2-8-8-4 and sometimes has 2-8-10-2. That didn't really make sense because the third shell can only have 8 electrons. We went with 2-8-8-4, which was what her teacher was looking for...and it still doesn't make sense to us why it sometimes changes. David tried to explain that to us, but we still didn't get it because he kept using words that he learned while doing his chemistry minor and Josie and I were trying to work with a grade eight vocabulary.

We made a two layer cake, with Reese's pieces in the middle. Then we iced over the whole thing. Josie iced the top and I did the sides. Josie then made the nucleus with more Reese's pieces and then I used bowls to measure where the energy layers should go (I had to use 4 bowls and Josie was upset because that dirtied more dishes). We painted over the imprints the bowls left with watered down food coloring, using Q-tips. Then Josie arranged her electrons on the cake. 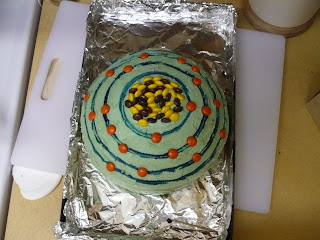 She made up a little legend and everything, so when her teacher saw her cake he didn't even ask her to explain it. He just said that she did a great job.

Dad invited Andrew and I over for dinner last night so that we could try some of the cake (and so that he could see his granddaughter). Titanium has never tasted so good!
Posted by Nancy at 5:17 PM