Campus has been “open” to Andrew for a week and he’s been going in everyday to get some administrative detail taken care of. It’s all been very confusing, actually. He’ll go and stand in line for hours only to be told that he doesn’t have this form or that form or that they’re only serving undergraduates that day. We have most everything taken care of now, though.

Rachel and I joined Andrew yesterday morning on his way to school. We took off a little late because we’ve developed a slight case of Pharaoh’s Revenge so we weren’t feeling too well, but we decided to brave the city anyway. We stayed with Andrew on the Metro until Sadat and then continued on to Opera, by ourselves. I couldn’t find the women’s car so I just joined a group of women and pushed onto one of the public cars with them. We only had to go one stop, so it really wasn’t bad.

And then we were off to explore Zamalek by ourselves. Getting directions in Cairo can be difficult. We typically take a poll and will ask several people before taking their directional advice because, often, people will tell you which way to go, even when they have no idea. We have a pretty intense mathematical equation for getting an answer. Basically we take the most popular answer and ignore all the rest.

I, of course, was lost the minute I stepped off the Metro and started asking for directions immediately. I was pointed in a number of ways: across the street, down this street, up that street. A few people even said that they didn’t know. I couldn’t get an “average” answer, so I just guessed and started walking.

I guessed wrong. Rachel and I ended up walking up Al Gezera street, up into Zamalek, and all around the island. My Arabic is lacking, to say the least, so this is how I’d ask for directions:

“Please, where is Ulm Kathom?”

Laugh all you want. I couldn’t find the main street of the Island. I suppose what’s even more laughable was that no one could really help me find the main street, either. The best directions I received were when I was too far away from the Metro to matter, but they were good directions, and I found Ulm Kathoom Street.

We were looking for a place recommended as a “child-friendly activity.” Always on the same place on the map, it hides under a number of names but usually is known as “Fish Garden.” Sometimes they tack the word “aquarium” on the end of it. So I was, naturally, expecting an aquarium of sorts. 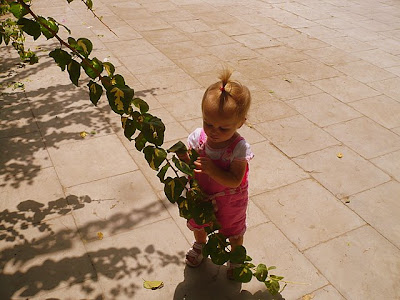 When we found the park, which, by the way, is incredibly easy to find if you head off in the right direction from the Metro, it wasn’t an aquarium at all. It was more like an arboretum, similar to the beautiful Palmen Gartens that my mom and I visited in Germany, but much less nice. Still, it cost us only a pound to enter (and a pound for the privilege of taking my camera in) and it had some nice patches of grass to play on.

There were children everywhere, playing soccer and lounging on the grass. Rachel and I stopped on one of the lawns dedicated to lounging so that I could check her diaper. I started unloading the diaper bag (a blanket for her to lie down on, a diaper, wipes, a plastic bag to carry the diaper home in) when Rachel saw the water bottle I’d been lugging around. It was a hot day and she wanted a drink, so I gave her a sip and then put the bottle down beside the diaper bag and continued to get Rachel ready for a bum change.

A teenage girl walked up to us, picked up our water bottle, opened it up, took a swig, thanked us, and walked away.

I had completely forgotten that anything left in the open is public property.

It was upsetting to me that this complete stranger had used our water bottle, especially because there was no place to buy water inside the park, but I couldn’t really berate the girl. After all, I’m here in her world so I can’t expect her to live by my idiom. Still, I wish she would have chosen someone else’s water bottle.

Rachel and I left that spot and began wandering around the park. We’d only looked at a few trees and flowers before Rachel lost all interest and began a wonderful temper tantrum. She wanted the crackers she had seen in the diaper bag, so I pulled those out and gave her one.

While she ate that we wandered around for a bit, trying to figure out why it was called “Fish Garden and Aquarium.” We found some fish, but we never did find the aquarium.

I think that like 50 years ago the park was a nice, pretty park with fountains and beautiful statues. Now, though, the statues are covered with the same layer of grime that covers the rest of downtown Cairo and the fountains are all dry. 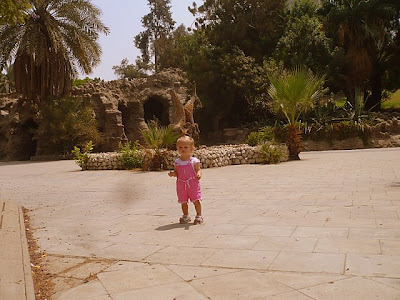 Rachel and a fish statue
We gave up our wandering when we got too hot to walk around anymore. We found a park bench, sat down and pulled out our water, only to remember that a random person had taken a drink out of it. I discreetly pulled out the hand sanitizer and a baby wipe and gave it a little wipe down before offering Rachel a drink. She happily guzzled it down.

A little boy walked up to us while we were enjoying our cracker rations. I no longer was drinking the water, since it had about equal parts cracker after Rachel’s last sip. He was bigger than Rachel and a little aggressive—he walked right up to her, tried to take her cracker, and then pushed her. 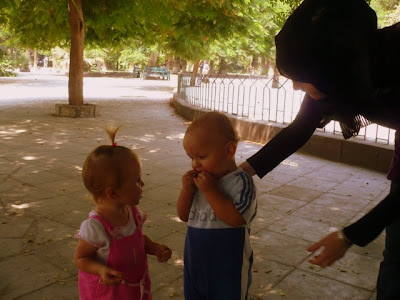 Rachel, Daniel, and Sofia
His mom rushed up. I thought she was Arab at first because she was veiled but she got after him in Russian instead of Arabic.

“You speak Russian?” I asked her in Russian.

She did. Turns out she’s from Moscow. We sat on a bench together and talked together while her boy, Daniel, picked on Rachel. He’s 1 and a half years old. She gave me wonderfully elusive answers to my questions, as Russians are prone to do (from my experience, anyway). Basically, she lives on Zamalek. She’s been here for 5 months. She doesn’t work, but stays home with her baby. Her husband is either back in Russia or she doesn’t have one. She was extra-elusive about that so I didn’t press.

When I asked her why she was here she answered that she is here “to live.” Upon further questioning she said that the climate is nice, whereas Moscow’s climate is horrible. Not exactly the answer I was looking for, but I suppose if I had the choice between Cairo and Moscow, I’d choose Cairo (at least for the winter).

We spoke mostly in Russian, which was nice. Usually people will switch to English for me because they assume, because I’m American, that my Russian/Arabic/whathaveyou is less understandable than their English.

Our landlord does that. He’ll speak in Arabic and Andrew will understand what he says, but sometimes, like if Andrew tries to clarify anything, he’ll switch to English. It comes out kind of like this.

That means, I’m guessing, that our phone line was cut outside of the building for some reason. Obviously that's bad. So the landlord brought a phone-dude (engineer, I suppose) to fix it, which is good.

How nice that Sofia found my Russian to be sufficient and let me speak it. I haven’t spoken Russian to anybody in so long! It was fun.

Soon, though, she decided it was time to go so I followed her out of the park because I had no idea how to find the entrance gate again. She took off with Daniel in one direction and Rachel and I headed back to the Metro in the other direction, following Ulm Kathoom (a much easier way than the way we took before). Rachel threw a fit and screamed almost the whole way there (45 minutes). She and I had a midair wrestling match, which I found exhausting.

People kept staring and giving me advice. Cover her head, give her some water, blah, blah, blah. I ignored most of it (except I did give her water, frequently) until we met Daddy at the Metro. Then I thrust her into his arms and said I was finished.

She continued to scream the whole way home, except for when she was happy, but those moments were fleeting. She did play on the rings for a while, which she thought was exceptionally fun, and she played some games with a man (he kept trying to grab her hand with a book he was holding), which she thought was exceptionally funny. 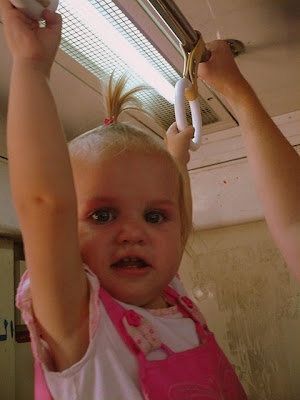 Hanging on the rings
Other than that she screamed the whole way. People kept giving us advice. Mostly just to give her water, which we were trying to do, but Rachel kept rejecting the warm, cracker infested water.

As soon as we got off the Metro we rushed to a kiosk and bought a nice, cold bottle of water. Rachel drank veraciously. We were both so exhausted when we got home that we fell asleep for a nice nap, covered in soot and grime and sweat.

I’ve been sneezing ever since getting back from Zamalek. I am so glad we don’t live there. It isn’t exactly unpolluted in Maadi, but compared to Zamalek it is cleaner than clean here. Seriously, the chain link fences in Zamalek are covered in a layer of grossness about a centimeter thick. It was so dirty. My face was so dirty just from walking around for a few hours that I had clean streaks from sweat running down. Gross, yes…
Posted by Nancy at 3:36 PM