Conference weekend was wonderful. Emily and Morgan came down from Idaho so we got to have a family lunch yesterday afternoon with Andrew and all his sisters and their husbands. We were only missing Jacob, who is still on his mission in Peru and doing great (he just became a zone leader; he's pretty excited...and overwhelmed).

It's funny to watch Emily and Morgan being so—dare I say this—young and in love.

I still feel like I'm young and in love but when I see Emily and Morgan I can tell that...they behave differently than Andrew and I do.

For one thing, I can't think of the last time I called Andrew Andrew. Usually I call him Daddy.

Like I said, I still feel like I'm young and in love but obviously things have changed around here.

Does this mean we left the honeymoon stage without me even realizing it? Are we no longer newly weds? Are we getting *gulp* old?

We're surely not getting old. That would be impossible.

It is, however, possible that we left the honeymoon stage when we entered the stage of frazzled parenthood.

I won't comment on whether that is good or bad because in some places wearing the hijab is so culturally frowned upon that it's actually against the law.

Do you want to know something funny? Of course you do.

At the awards banquet they presented a painting to the family of John W. Keys III, who was posthumously given the Administrator of the Year Award. We were going through the pictures that Andrew's friend had taken of the evening and were puzzled to see this one: 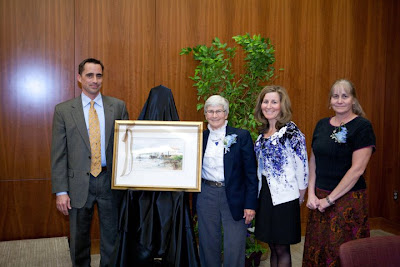 Who, we wondered, did they have holding up the painting?

There are no Muslims in his program and we didn't recall seeing any fully-veiled women at the event. Since virtually no one on campus veils (since the majority of the student body are Latter-day Saints) anyone wearing a veil is pretty noticeable. Who could this be? Perhaps John W. Keys had three daughters and one of them converted to Islam and chooses to wear the niqab...?

And then we realized...it's not a person.

So, there you go: things are not always as they appear. Simply because Andrew and I don't embrace every time we see each other anymore doesn't mean our love has fizzled out; we're thrilling on the inside, I assure you. We're simply romantically albino,* though we are slowly warming up to the freedom of expression of affection (I do so like holding that boy's hand) the longer we are here.

This post ended up being very much not about General Conference, as I originally intended it to be. Sometimes my writing runs away with me. Still, it was a wonderful weekend and it was fun to spend time together as a family. I'll blog about that later, though, I guess.

* I love the line from Curious Savage (a play by John Patrick) where Fairy claims her parents were albino and someone challenges her veracity so she replies something like, "Well, they were...emotional albinos."
Posted by Nancy at 2:13 AM