Just as I was kind of getting oriented in Accra, we had to leave for a fun weekend of tourist stuff today. We spent the morning taking care of lots of the mess of the bus theft. We left the hotel and took the people who lost their passports to the US embassy so they could start the replacement process.

While we waited for them we went and visited the offices of Acumen Fund. The purpose of our trip is actually three-pronged: (1) see cool touristy things, (2) work on our projects, and (3) visit nonprofits and NGOs to get a taste of real development work. (Did I really just do a list with parenthetical numbers? This business writing stuff is getting to me… grumble… :) )

Our visit with Acumen Fund was absolutely fascinating. They are a nonprofit entity that invests in larger scale social ventures (like ambulances in India, IDE’s treadle pump system in India, pay toilets in Kenya, etc.). Rather than just grant money to these businesses, Acumen researches (and helps improve, if necessary) their business plans and invests in the company, generally taking a place on the companies’ boards of directors. They then work with the different ventures to help them remain sustainable, viable, and working. Any returns on their investment are used for other social venture investments. They do some incredible work.

After the visit we went back to the embassy to pick up the passport people, drove by the airport to see if someone’s missing luggage had showed up yet (it hadn’t) and went by the police station to work through a new turn of events in the ongoing stolen stuff saga.

This morning we got a call from a member of the church who the group of students who went to the island before the official trip hung out with. He had heard from one of the island’s councilmen that the missing bags had been found. Yeah. Found.

He got us in contact with some Nigerians who claimed to have all the stuff, but the whole situation seemed extraordinarily fishy—they wouldn’t tell us the names of all the supposed passports they had and they wouldn’t tell what other stuff they had… just that they had our stuff. Our initial theory was that news had spread down on the island (somehow…) that the Americans that were there had been robbed, some Nigerians caught wind of it and decided to try to scam us.

During a series of phone calls, though, the Nigerians kept revealing more information that seemed to show that they might actually have the stuff. Rather than try to set up a meeting place (because that would be really safe), we decided to go tell the police and have them and the tour company decide what to do.

After taking care of all that mess and checking out of the hotel, we began our long drive northeast to the city of Ho, where we’ll be staying for the next couple nights. The drive was absolutely gorgeous (with no pictures, though, because who really wants to see blurry pictures taken from a bus… better pictures forthcoming) and took us through the jungles of the Volta region—rolling steep green hills and prehistoric looking rock cliffs.

We made a short detour through a tiny village to visit the Cedi bead factory. I was totally skeptical of the place at first—it totally seemed like one of the hundreds of alabaster “factories” in Luxor, a “weaving school” outside the Pyramids or near Petra, or a “carpet factory” in Fes or Marrakesh. Fortunately it was actually pretty legitimate. The owner—named Cedi—is actually a world famous bead maker who travels all over to different American and European art shows. He was in town this week (in the past he’s often not been there when BYU comes through), so he gave us a demonstration of making beads.

All his beads are made from recycled glass—crushed up wine, liquor, water and oil bottles. The bottles are ground to a fine powder that’s then used to make fancy designs in a mold. The mold is then fired in an ultrahot termite-clay oven, which melts the glass in the set pattern and makes the actual bead. After the firing, they sand the beads down with… dun dun dun… sand, and then they sell them (for surprisingly cheap prices) at the local gift shop. Awesome stuff. 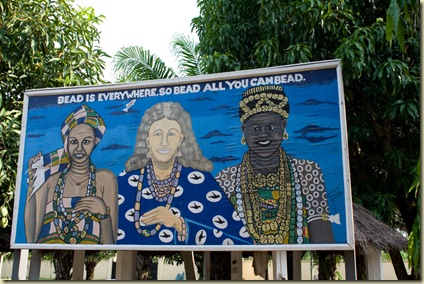 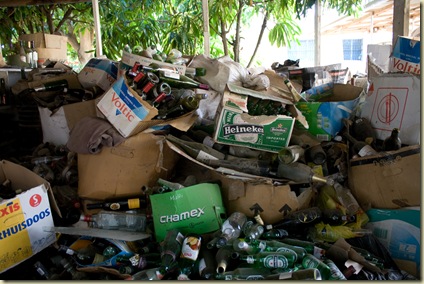 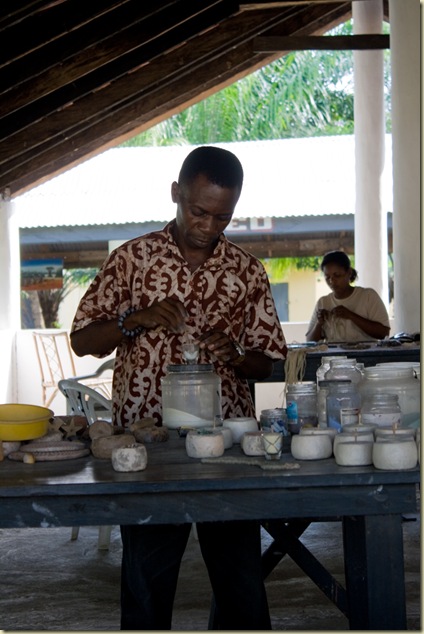 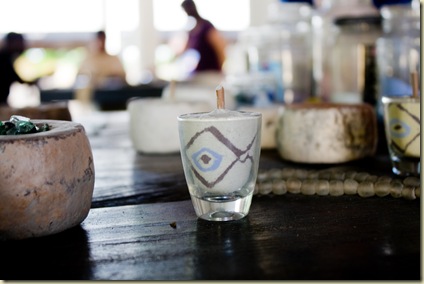 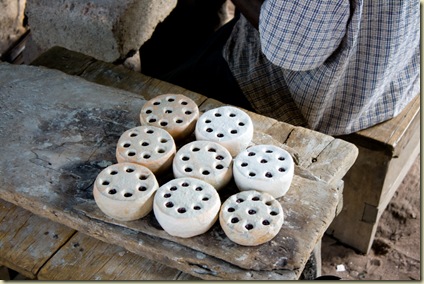 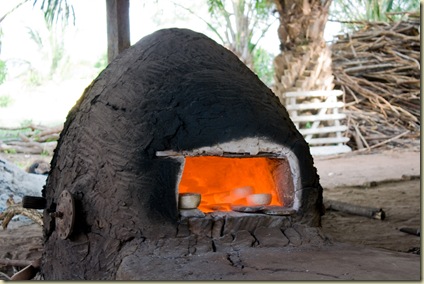 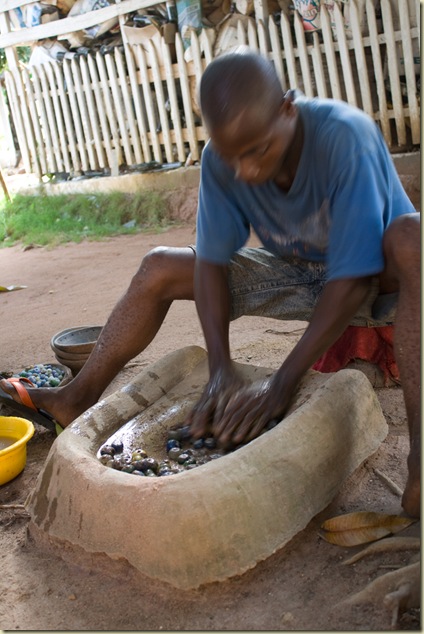 After the bead-making stop, we continued on to Ho through a gigantic thunderstorm and torrential downpour. The roof of the bus and several of the windows leaked, which made the ride interesting (and not too hot). I’ve never seen so much lightning—it was striking everywhere in the surrounding jungle.

We finally made it through the rain and to the little village-like city of Ho, checked in to the hotel, and ate dinner. I spent the next couple hours fighting with the hotel’s internet connection, which is absolutely horrendous, and which seems to be directly correlated to the amount of rain and thunder outside. The connection would drop after each big thunderclap. The hotel’s power went out several times too. I eventually just gave up and passed out on the bed. All that traveling and bead-making-watching must have worn me out or something :)