Yesterday was beautiful once again. A balmy, sunshiny 75 degrees. Perfect, in my opinion.
We planted some peas and transferred Rachel's sunflowers from their little pot on the windowsill to the garden. There were ten sunflowers in a pot the size of a thimble and they were getting a little crowded. Okay, so the pot was bigger than a thimble; it was more like two inches in diameter, which is still a little small for ten sunflowers.
In the afternoon a storm rolled in, which we were expecting. By the evening we were having a nice April shower.
When we went to bed I said, "Oh, I hope those sunflowers are alright..."
Andrew said, "Of course they'll be alright. They've been through a lot already; they're survivors. Besides, it's not like it's going to snow..."
Did I ever tell you about how Andrew knocked them off the window sill? Twice? Once when he was drying his hands on the towel—and then he replanted them upside down so I made him replant them right way up—and again when he was telling his parents what he did.
"It was sitting on the edge of the windowsill, like this...oops."
Luckily he remembered which way was up the second time around. Hint: the root goes down.
Yes, they've been through a lot. And they've survived a lot.
However, an unavoidable part of transplanting plants, at least when I do the transplanting, is transplant shock. It's like PTSD, only for plants. So the poor little dears were already suffering through that.
"Ahhh! They moved me from my cozy pot and although I can stretch my roots and not have to choke from thirst because there's plenty of water and soil for everybody, I think I will wilt and mourn, anyway."
What babies.
To top it all off, though, contrary to what Andrew suggested, at some point in the night our April shower turned light and fluffy.
And several inches (like five—five inches!) of it stuck to everything.
It's like spring died. 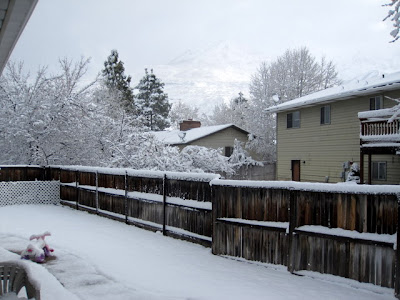 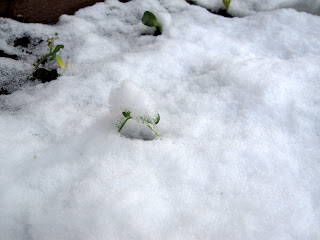 We'll see if they pull through.
And, seriously, what was this, Spring? Some kind of an April Fool's joke?
It's not funny.
Posted by Nancy at 11:46 AM