Our original itinerary for our first day in Ghana had us taking a grand tour of the main sites of the Accra. True to third-world form, nothing went as planned today. Nothing.

The four hour delay at JFK put us behind our tour schedule before we landed. After clearing customs, reporting someone’s missing suitcase, and loading up the little 20ish passenger tour bus, we drove to the hotel to meet the other half our group. There are 17 people on this trip: 2 professors (one with his wife and youngest daughter), 1 TA, and 12 MPA students. Six people flew out a week early to spend some time in a tiny island village named Big Ada—location of one of the first Empower Playgrounds. Beyond the terrifying food (fish soup and oysters, complete with heads and eyes and other nastiness… every single day), they had a blast and regaled us with tales of horrifying seafood as we had a brief orientation at the hotel.

After checking into our rooms at the hotel we headed out to lunch at some super local restaurant. They had fish heads. I didn’t eat one. I ate this instead: 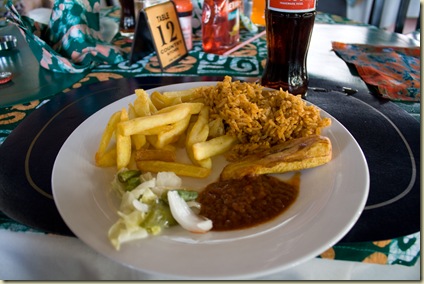 During the orientation the tour company told us that we can (and should) leave our valuables on the bus whenever we go places. The driver is supposed to stay inside the bus at all times when we’re gone so the stuff is safe. We need to bring laptops and other expensive gear to some site and client visits, but it’s a bad idea to bring backpacks full of electronics into crowded touristy places—hence the bus qua safe haven. The MPA program has been doing this for years—drivers have always stayed glued to the bus to guarantee that nothing happens.

During lunch, five people left their stuff in the safety of the bus. I only had my DSLR, so I brought it in, just for fun.

While we were having lunch, our bus driver came and sat down in a corner of the restaurant and started eating. Nobody really noticed or cared… those that did see him assumed (justifiably so) that he was still taking care of the bus, watching it out of the corner of his eye or something.

After lunch we went back to the bus. And it was completely empty. Someone had taken everything off.

That “everything” entailed backpacks, passports, iPhones, MacBooks, over $1,000 in cash (both US and Ghanaian), several credit cards, fancy noise canceling headphones, a camera, journals, and even a fully annotated review copy of an academic article.

The driver swore that he locked the door, but there were no visible signs of entry. The witnesses in the area claim to have seen nothing happen. Obviously something did happen, though. Thousands of dollars of stolen stuff happened.

We then started a wild bureaucratic hunt to file a police report. We drove down to the tour company offices and filled out paperwork there. We were then directed to the local police station, which we finally found in the middle of a super poor slum. The village/slum prison was right behind the main police desk—prisoners waved happily to our group from behind Wild West-style bars.

It looks highly unlikely that the stuff will ever be found. Everyone immediately called to cancel credit and debit cards and they’re bracing themselves for eventual identity theft (or mail/e-mail harassment).

What a horrible, disgusting way to be introduced to the country. For the rest of the day I felt sick for those that lost stuff. I know what that’s like. Stupid Italian hostelmates. Our jam-packed day of touristy stuff was severely cut short, and nobody really felt like doing anything. Crawling into a locked hotel room and staying there for three weeks seemed like a fantastic option.

But we pressed on anyway, which fortunately helped lighten the mood. Our first stop was the Kwame Nkrumah Mausoleum, built in honor of Ghana’s first post-independence president. In 1957 he announced the country’s independence from the exclusive British polo grounds right on the beach—kind of an in-your-face move. The monument was built on those same grounds—in-your-face times two :) 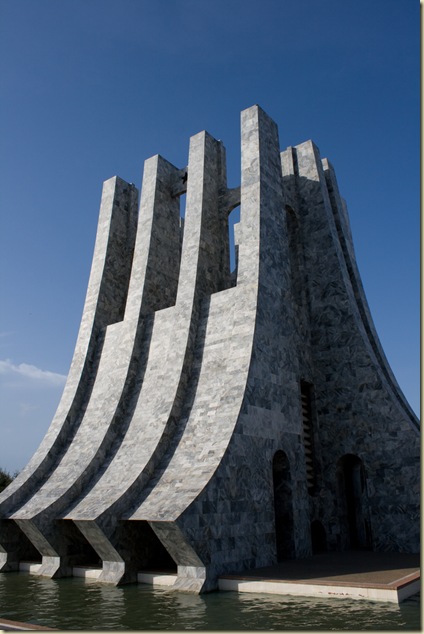 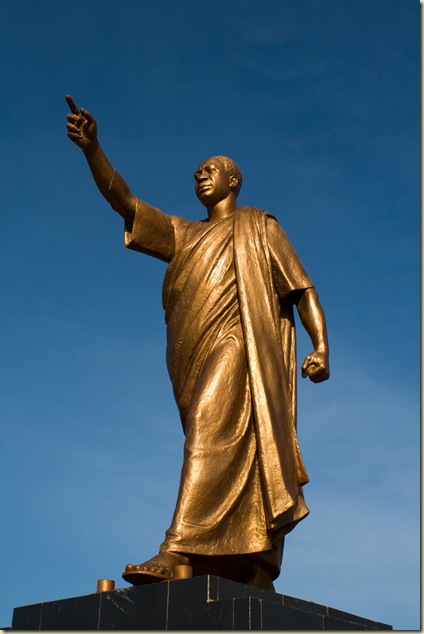 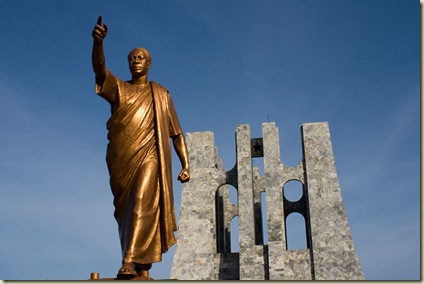 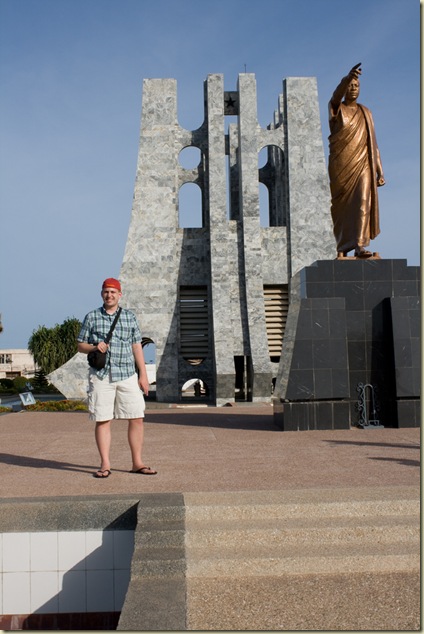 In addition to the huge monument over where he’s actually interred, there’s a mango tree planted by Nelson Mandela, beautiful fountains, and a small museum, complete with photos of state visits with the Queen, JFK, Castro, Kruschev, and Mao. Nkrumah got around during the Cold War. His wife—an Egyptian named Fathiyya—is buried next to him. Egyptian-Ghanaian connection. Finally. 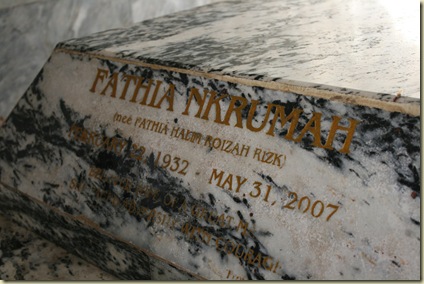 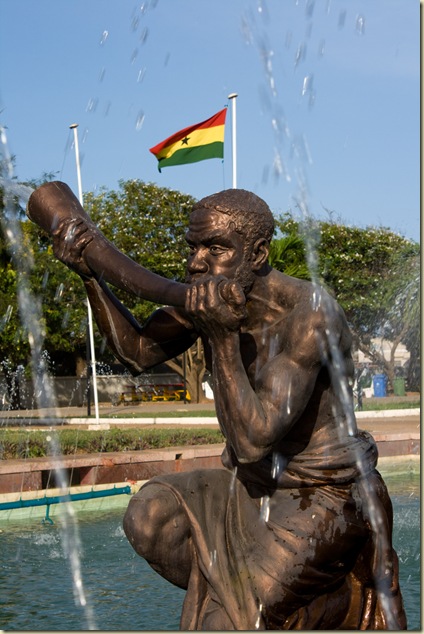 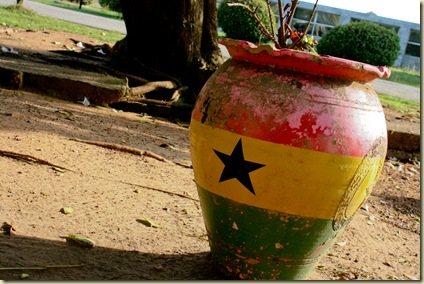 After the monument we drove down the coast to the art market, full of some pretty cool Ghanaian stuff and tons of obligatory tourist kitsch. Like all the markets in the northern part of the continent, bargaining is standard.

After the market we headed through some slums to go see a coffin shop. Yep. Coffin shop.

I had no idea why that would even be included in our itinerary. On our way our tour guide explained that many Ghanaians like to be buried with signs from their life or the life they would have liked. If someone wanted to be a doctor but never made it to medical school, they might be buried in a coffin reminiscent of doctors. As he told us this I imagined regular old coffins with fancy engravings, which made the coffin shop sound a little more interesting.

I was completely shocked when we got there. These aren’t normal coffins. 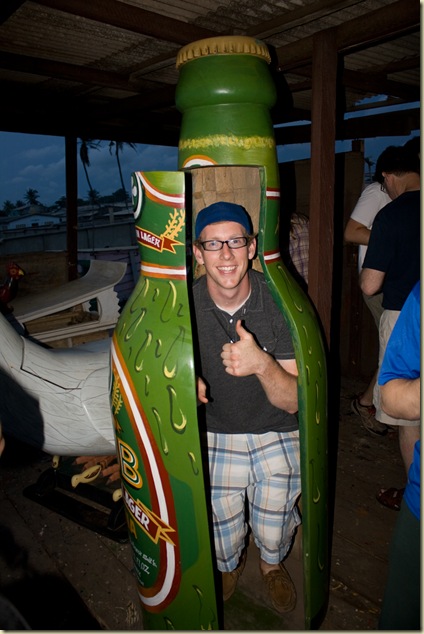 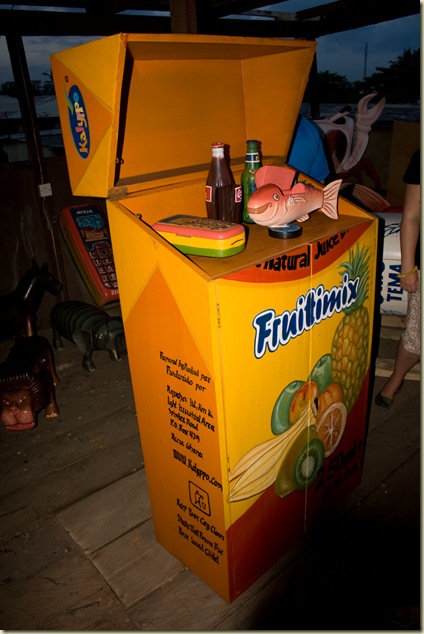 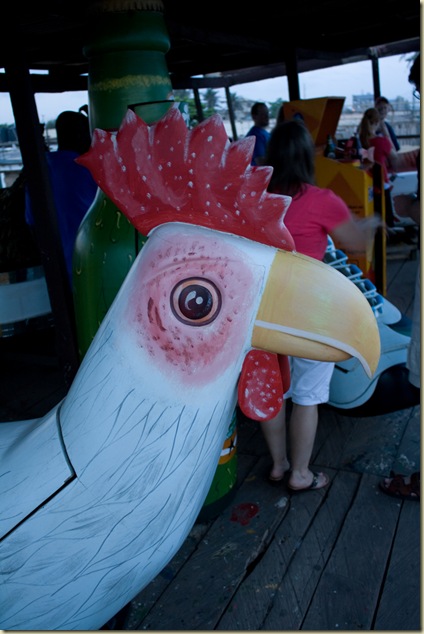 They’re for people who really like beer. Or juice boxes. Or chickens.

What would your coffin be?