I've never been to a Pinewood Derby before, though I have been to several Kub Kar Rallys. They amount to basically the same thing. A bunch of excited 8, 9, and 10 year olds bring cars that their parents helped them make and send them down a little racetrack to see whose car is the fastest.
We had some great looking cars and every excited boys. It's fun being the wolf leaders during the week but teaching the bear den at church—that way we know all the boys when we get together at pack meeting.
Part of my assignment was to make numbers for the boys to wear around their necks so that we could remember which boy went with which car. We combined with another pack so we had about six boys that we simply didn't know by name or by face, thus the introduction of the number system.
We made an announcement that all the boys were to come over to me to get their numbers and the boys started crowding around me. I told them that I needed them to line up so they started forming a neat little line—they were not even close to military standards with all their pushing and fidgeting but it was a nice enough line. Suddenly, though, their formation broke.
Boys went scattering left and right. At the epicenter of the havoc stood a lone little boy, who was busy vomiting impressive amounts. First it was just a little bit—that caused the scattering—but then he just kept on going. He heaved again and started spewing out a waterfall of throw up.
Miriam, who had been hanging around nearby, had been snatched out of the line of fire, just in time, and was placed on a stranger's lap for safe-keeping (which she was not happy about at all).
I was just yelling to the boys that instead of meeting here to get their numbers we'd be meeting way over there when a little boy who we'll call Monson started running toward me. He wanted his number. And he didn't notice vomit-boy, who was still vomiting, at all.
The spread of the vomit was terrific. It was probably as big as a diningroom table (with all the leaves in).
We tried to get Monson's attention but Monson kept on running. He hit that lake of vomit and his feet went right out from underneath him.
It was one of the funniest things I've seen in a long time. Luckily, Monson thought so, too. He recovered gracefully (and remarkably void of vomit) and we sent him to the washroom to freshen up (ie. wash as much of the vomit off of himself as possible).
I then directed the boys to the other end of the gym and handed out their numbers, leaving the clean up to other responsible adults. This is Monson with his car, pictured below. As you can see, he is still smiling and even had time to get in line by number eleven (we had fourteen boys show up). 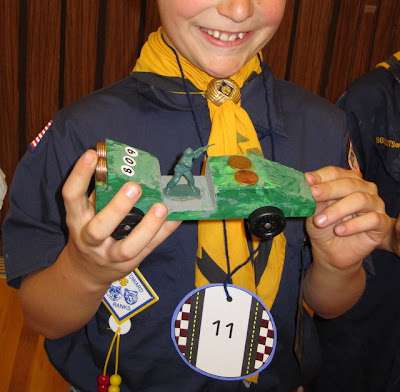 It was an exciting start to the rally.
I missed most of the actual racing because I helped judge the workmanship of the cars. I suppose I should have expected to do that since I was also assigned to make certificates for the boys (which I completely forgot about until the day before the Derby). It was tricky business trying to award each boy something that worked well with both their car and attitude—some 8/9/10 year old boys are rather emotional and we wanted to avoid as much crying as possible. 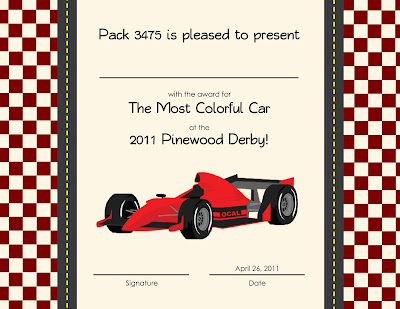 I think the evening was, barring the vomit business, a success. I didn't see any tears and everyone seemed to have a lot of fun. Rachel even got to play with her beloved Luke. She threw the longest temper tantrum after school on Tuesday when I told her that we'd be busy with my dad all afternoon, meaning that she couldn't play with Luke. She was elated to get to spend the evening with him, though I think she spent more time running around with his sister than with him. Whatever, as long as she's happy. Luke's brother, by the way, is in our den and his car was the fastest.
Go our team!
Posted by Nancy at 10:58 PM