This morning when I woke Rachel up she said, "I think I had a good sleep again last night."
"I think so, too," I said.
"Two nights in a row!?" she exclaimed with wonder.
Sometimes I just can't believe it, either.
We did a French ponytail (or at least what my mom always called a French ponytail) in her hair this morning and then had breakfast (toast) on the run since doing her hair took so long. 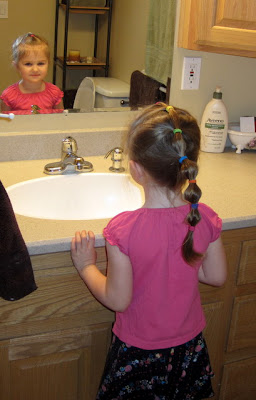 Rachel was very pleased with her look today, both her hair and her outfit. 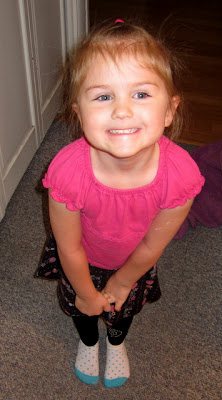 It was good that she looked so cute because today we went over to my parents' house to celebrate Josie's birthday. She's seventeen today, which I can't even believe! 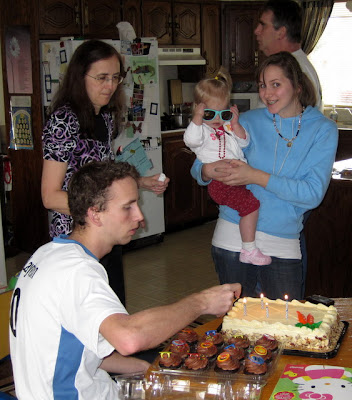 I made her a headband and a card. What she really wanted was for me to make her a hippo but I didn't have time to do that...well, I suppose if I had started earlier I would have had time but I didn't start earlier so I didn't have time. Instead she got a headband. The card, though, was a hippopotamus card, which totally makes up for the lack of hippo toy, right?
I took my inspiration from Sandra Boynton and, admittedly, my hippos don't really look much like her hippos. Must be something about how like she's an artist and I'm not. 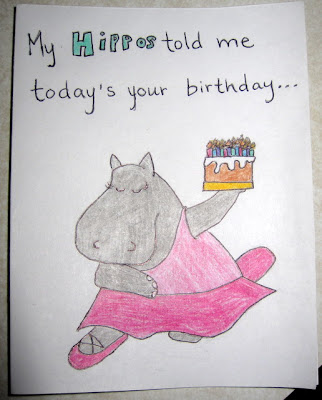 I thought I was being terribly funny with the inside of my card. The front says, "My hippos told me today's your birthday..." The inside says, "And my hippos don't lie!" 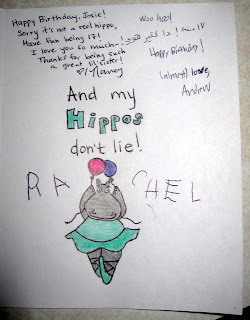 Josie read it and said, "Oh. Ummm...I don't really get it."
So I had to explain it to her. It's not like the song (Hips Don't Lie) is that old! It's from 2004—that's only seven years ago...which means Josie would have been like, oh, 10 when the song came out and was not really that into Shakira. So maybe the song is that old. Josie had a carrot cake (with five candles) and chocolate cupcakes (with twelve rings) to celebrate her day. She wanted the whole world to know and remember that she had Sesame Street cupcakes for her birthday—Miriam chose an Elmo one and Rachel chose Big Bird, though we ended up bringing home only Big Bird so we might have to go back for Elmo later since he's definitely Miriam's favourite. 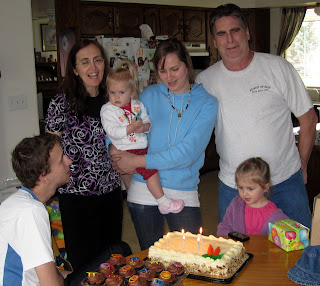 Josie helped Miriam eat a cupcake. I asked Miriam not to get dirty and she did her very best. 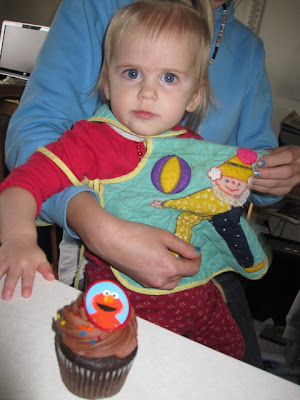 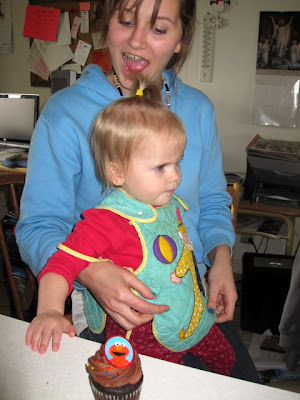 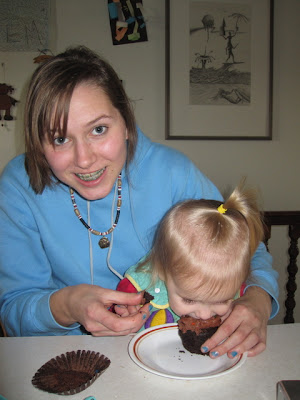 It was fun to get to spend a few minutes with Josie on her birthday, between school and work and dinner it was hard to get everybody together. As it was we ended up having cake with Patrick, Mom, Dad, and Josie before Patrick left. And then David came home and then everyone left to go to an Indian restaurant and I took the girls home. Oh, well. It seems these affairs get to be less and less dramatic as the years go by. Rachel, for example, is dying to be four. I'm really okay with staying twenty-five.
Posted by Nancy at 11:39 PM