Dinner with the Greats II

Yesterday we went up for dinner at Grandma and Grandpa Layton's house. My sister Kelli was there with Olivia and Sabrina and Allen. It's been a long time since Rachel saw the twins and she was very excited about this. We had been talking about her cousin Michael and how he's her second cousin because his dad and her dad are cousins.
"Are Olivia and Sabrina my second cousins, too?" she asked.
"No," I started answering.
"Are they my last cousins, then?" she interrupted.
"No, they are your first cousins because their mom is my sister," I told her.
She's been mighty confused about first, second, and last cousins ever since. I don't think last cousins even exist... 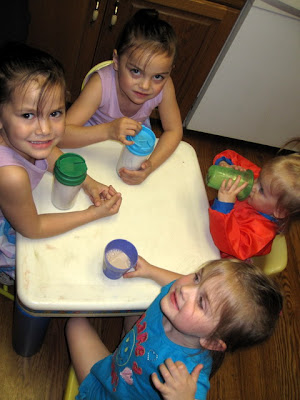 Kelli brought a table and chairs set for the girls to use. Miriam was so proud to sit at the table with the "big kids" until Uncle Kevin came in for dinner. He has a big, booming voice and my children find him to be a little intimidating. Miriam started mewing for me like a kitten and ended up finishing dinner sitting on my lap because she was too afraid to go anywhere else.
After dinner we let the kids outside to play until it got too cold and then we herded them back inside for cake. Uncle Kevin stayed in the living room so Miriam was able to hold her own at the kid table.
I tried to do an areal shot of the kids but I kept cutting off someone no matter how hard I tried. Once I finally got the camera positioned correctly the girls were far too interested in their cake to proffer me any smiles so instead I got pictures with forks jammed in mouths. 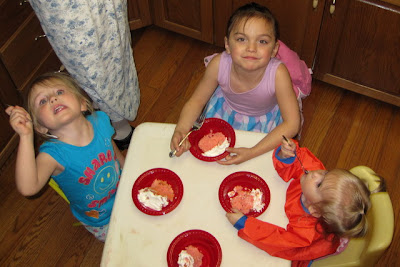 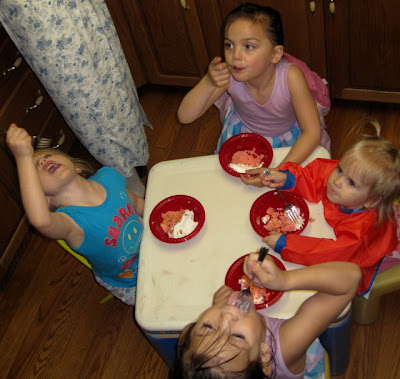 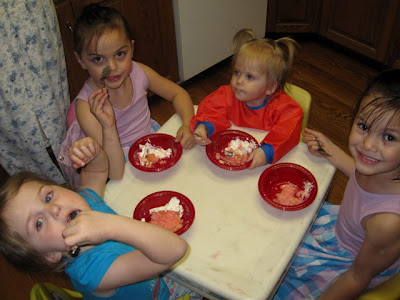 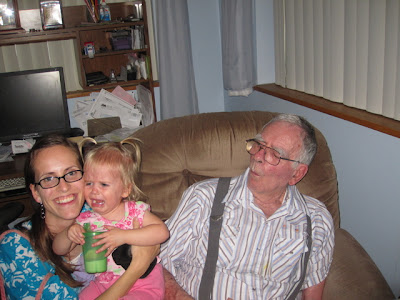 I asked Miriam if she could try to put on a happy face, just for one picture, and this is the product of that: 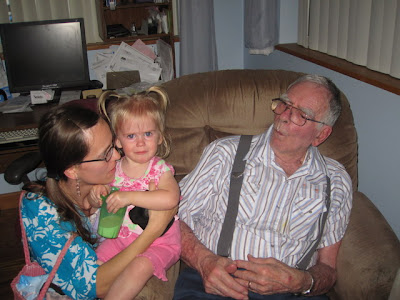 Very stoic of her, I think. Rachel, too... If either of them ever expresses a dream of becoming a doctor I think I will suggest to them that they avoid specializing in geriatrics. 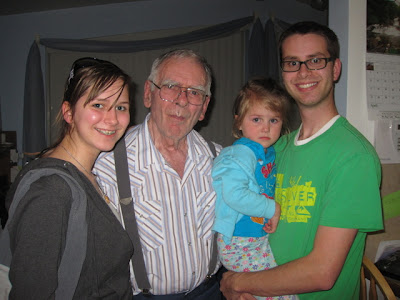 We took a picture of Olivia and Sabrina with Grandpa since this is likely the last time they'll see him before he leaves for Germany. 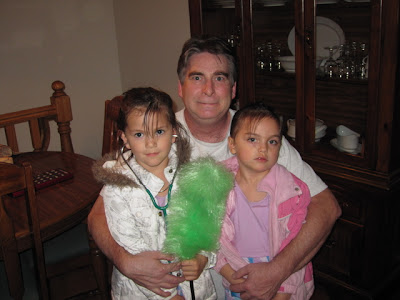 And Grandma snuck in a few great-grandma kisses on our way out. 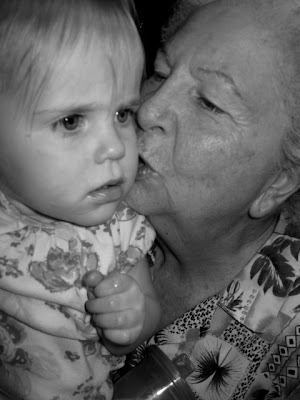 It was fun to get together, for sure, though I didn't get to sit down and chat with my grandma like I've been wanting to do. There were too many people there to have time for a good interview. Perhaps later this summer...
Posted by Nancy at 1:51 AM