This afternoon we went to the Carl Bloch exhibit at BYU. It was wonderful; it made us a little travel-hungry but also almost made us feel like we had escaped to Europe for a bit. Really, though, a bit of Europe escaped to us.
Many of the pieces, including five alter pieces, had never before left their homes in Denmark and Sweden since they were originally placed in the 1800s. They were amazing to see, and though I'm sure they are impressive-looking at the head of the alter in the churches they belong in, it was thrilling to see them lit artistically against the plain museum walls. It gave them different attention and emphasis, I'm sure, than what they are accustomed to in their church homes. It was certainly interesting, as well, to see Bloch's paintings of angels.
Mormons love Bloch's paintings. We use his images in our magazines, manuals, and on our meeting house walls. However, I've never seen any of his paintings with angels. The romantic idea of a a glowing angel with feathery wings doesn't quite fit with our religious idiom. We certainly believe in angels but we believe they are either unembodied or disembodied beings—spirits awaiting a body who have not yet come to earth or spirits who have died and parted with their mortal body and are awaiting resurrection—so they look very similar to a mortal being.
That being said, I absolutely adore Bloch's alter piece depicting Christ in the Garden of Gethsemane being comforted by an angel. I understand why we wouldn't have pictures of winged angels in our church publications but I am in no way offended by winged angels; it doesn't really matter what they look like. Still, the angel in this piece looks angelic—so comforting, understanding, tender, celestial, uplifting, and beautiful. If I had to choose an angel to follow me around all day I would definitely choose this one.
I also liked the exhibit where they showed the set of paintings Bloch was commissioned to complete for the Frederiksborg Palace in Denmark after a fire destroyed the royal...religious...room. If I could have taken notes I would have but they confiscated our bags before we entered the exhibit. Anyway, a fire destroyed many religious paintings in the palace and so Bloch was commissioned to replace them. It took him something like fourteen years to complete over twenty paintings (the ones in the picture on this page).
It was an awesome exhibit. If you're in the area, you should go. You can order your free tickets here.
We obviously weren't allowed cameras into the exhibit, but we let the girls run around outside the museum before going home. Miriam was getting a little wound-up when we were in the war poster exhibit and kept running behind walls so she could jump out at us and say, "Boo!"
They definitely had earned some playtime after we draged them the art museum. 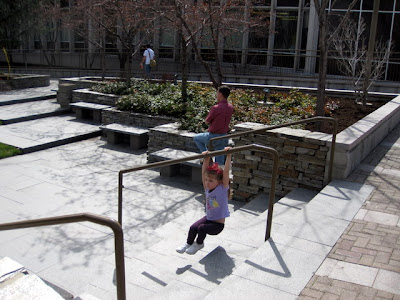 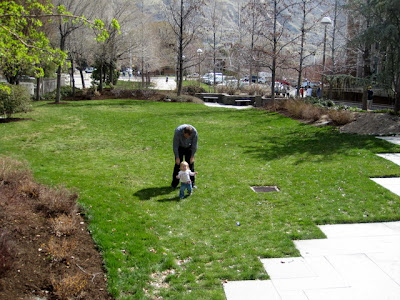 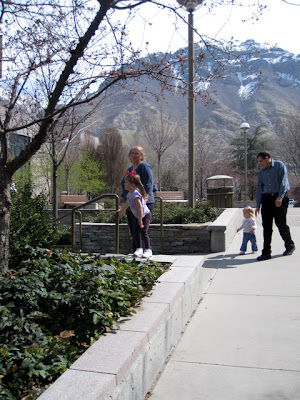