Rachel wanted to go on a picnic today but failed to announce her idea until we were already sitting down, eating lunch. We went on a snack picnic, instead, after Miriam woke up from her nap.
That poor baby got her hand smashed in the door while she and Rachel were playing a game. She cried for so long that, after nursing, she was ready to sleep it off. She missed lunch, so it's a good thing we went on a snack picnic!
It wasn't anything fancy. I just grabbed a blanket, some bread, and some cucumbers. Ta-da!
The girls had fun playing at the park, though, despite the incoming storm. They even got hot enough from running around that they even took off their sweaters. I, apparently, didn't run around enough because I found the chill factor of the wind was something fierce; I left my sweater on.
There was some equipment left outside the school so we borrowed it. 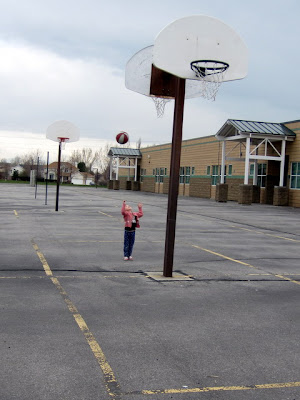 We shot some hoops: 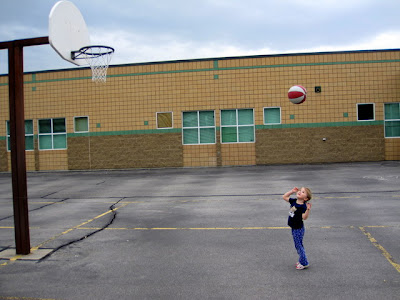 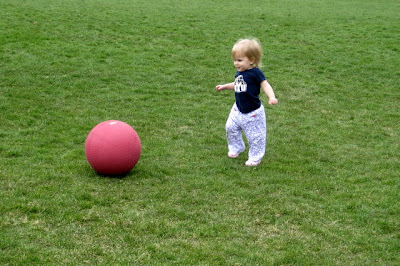 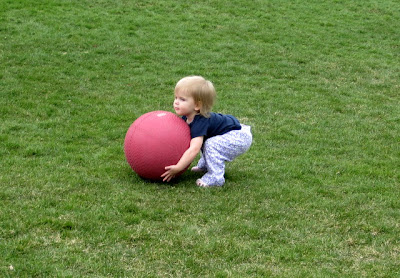 Rachel was impressed that I can shoot a basketball. She danced around me as I shot the ball singing, "Go BYU! Go Jimmer! Go BYU! My mom plays basketball!"

She was dancing so hard that I don't think she even had time to notice I was missing 95% of the time (my aim is horrible) and she would erupt into cheers every time I hit the rim or backboard (which happened a whole lot more often than I actually made a basket). 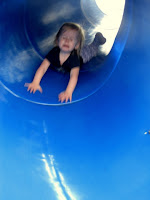 Miriam decided to be brave at the park today. She climbed up the stairs and went down the slide all by herself. I helped her do it a handful of times, with Rachel catching her at the bottom, and then she said, "No. I do!" So I backed off and let her do it by herself.

She went down Superman-style and shot out the end of the slide like a rocket. She came out so fast that neither Rachel or I had time to catch her and she ended up doing an awkward crash landing.

I thought she would be finished with slides after that, but instead she brushed herself off, marched to the stairs, climbed up, and did the same thing again. I couldn't convince her to sit on the slide for anything but at least she's brave enough to go down by herself now, right?

Eventually the girls decided it was cold enough to put their sweaters back on, and apparently if it's cold enough to wear a sweater there's no point in playing outside (they must be related to me) so we went home to warm up.
Posted by Nancy at 7:38 PM