We took a quick trip up to Idaho to visit Auntie Em—or as Miriam calls her, Emmy. The drive up was amazing; we didn't stop once and the girls were remarkably well behaved (thanks in large part to the portable DVD player). We drove straight to Emily and Morgan's house where we chilled for a while, until we could check into the hotel. I worked; Rachel watched The Land Before Time; Miriam ran around getting into stuff; everyone else played games.
Around 3:00 we left for the hotel, leaving Rachel behind to bond with Emily and Morgan. Morgan gave Rachel a lesson on his drum set—I'll have to get the pictures/video from Emily. Rachel had a blast.
We checked into the hotel, got Miriam settled down for a nap, and left Grandma to work while we (Andrew and I) went to the temple. We hadn't gone yet this month and this was kind of our last chance. As happenstance would have it, we were sealed in proxy for a Mathias Heiß and Maria Winter. Andrew has an uncle named Matthew, but this was obviously not him since Mathias Heiß was born 23 September 1852. Still, it was interesting to run into a mysterious Heiss from Germany—neither progeny nor progenitor is listed on the record I found for Mathias.
Andrew's family is a bit of a mystery, as well. His great-grandfather, Frank Joseph Heiss, was born in Bavaria, Germany 2 October 1904 and immigrated to the United States sometime before 4 February 1928 (I know this because that's when he married Great-grandma Gertrude in Chicago.
I think Great-grandma Gertrude has kind of a ring to it. She could have gone by GG or GGG but I know she went by Grandma Heiss. She was from Germany, too, but also immigrated to America. She tried her very first banana on the boat ride over. I know this from reading family history; something I should apparently do more of.
Anyway, Great-grandpa Frank's mother was Therisia Maria Heiss, and her mother was Rosina Heiss, and her father was Joseph Heiss. And that's where it ends. I'm actually a little clueless as to where the mystery begins and why both Therisia and Rosina passed their maiden names onto their children, but there you have it: another family history mystery, rife with scandal and illegitimacy and lies (much like my own family tree).
Seriously though, who needs soap operas when you have family history?
The temple isn't too far from the hotel we stayed at, but we drove there because it was so cold, windy, and the threat of snow was very real. Too real, as we found out the following day by opening the blinds and being blinded by the early morning sunshine glaring off the snow-covered fields. 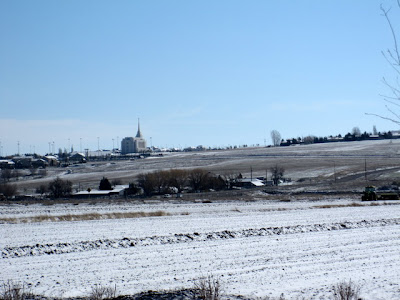 I don't want to talk about snow, though, so instead I'll tell you that we went to dinner at Frontier Pies—a restaurant where you drink out of Mason jars while sitting next to a mannequin frontiersman soaking in a bathtub. I got stir fry because I like vegetables and you could hear Rachel and Miriam vying to share my veggies from tables near and far. I didn't even know Miriam could say broccoli, but—surprise!—she can.
After dinner we went back to the hotel to go swimming and kept the girls up for far, far too long (but that's what vacations are for). 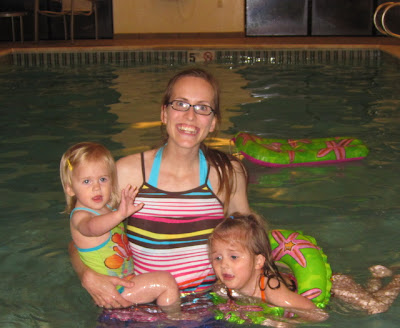 Ignoring the snow, we went swimming again the next day, ever grateful for an indoor pool.
One of the main reasons we chose Idaho as our destination was to see Emily. We spent most of our morning at their house, after a quick stop to admire the new buildings on the BYU-I campus. Grandma went to school there so she was able to tell us some great stories—she showed us her old apartments and the building she worked in. 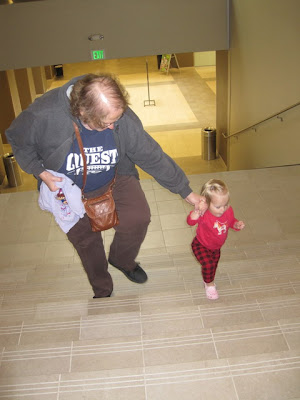 We also found a random soccer net in the quad, which the girls found very entertaining. 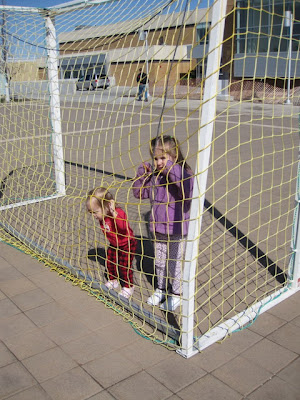 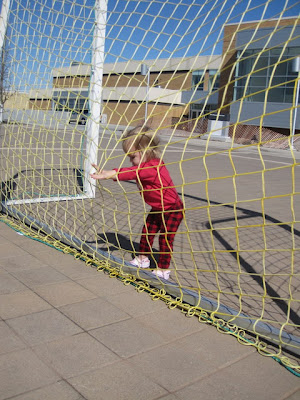 It was all silliness at Emily and Morgan's house. 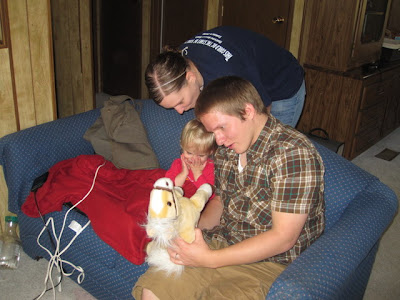 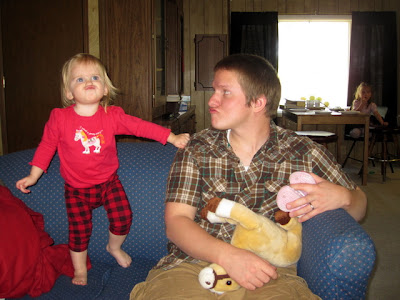 Emily married into owning a dog. Her name is Sadie and she's two years old. My girls have a love-hate relationship with her. 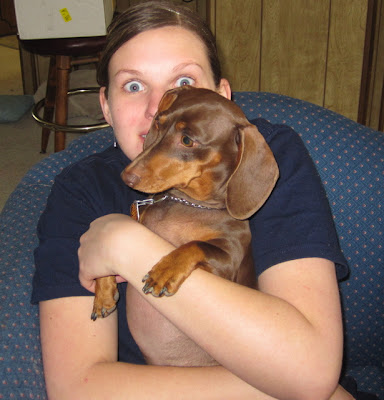 As long as Sadie doesn't bark, lick, jump, run, or blink, the girls love her. Rachel was much braver around Sadie than Miriam, but considering she recently became BFFs with the great pyrenees down the street, a dachshund was easy to befriend. Miriam's defense mechanism remained throwing herself on the floor—no matter how often I tell her that playing fainting goat won't help her if she happens to meet a killer dog, she insists that myotonia congenita is the safest route to take. 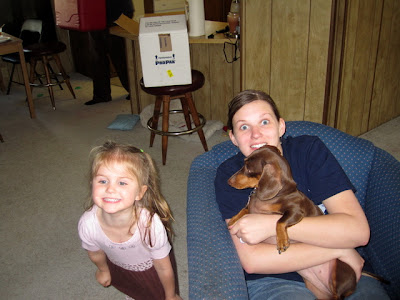 Sadie was good overall; she'd be a little hyper when we first arrived but would soon calm down. On Friday afternoon, though, Miriam and I took a nap in the spare bedroom—technically I wasn't going to take a nap but Miriam took so long to fall asleep that I may or may not have fallen asleep before her—and when we came out Sadie went berserk. She started barking and jumping and running around—it was like she couldn't understand where we came from...we didn't use the front door...how did we get in the house? We were driving her a little nuts but she's pretty easy to calm down if she can cuddle with her "mom" or "dad." 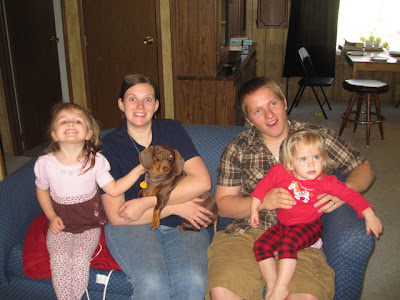 The trip home was...er...not as nice as the trip up. Let's just say that an anonymous three-year-old threw a tantrum that lasted for a full quarter of our journey. But we made it home and now Andrew is madly doing laundry to prep for his Ghana trip.

I'd help him but I seem to have thrown out my back—yes, I can run a marathon and be fine but trying to s-t-r-e-t-c-h from the front seat to the back seat of a minivan to pass Rachel a kleenex and I kill my back—so he's on his own, though I might have to pitch in to clear all the random trip-hud from the bed.

Tune in next time when I tell you what went inside our Idaho Sandwich.*

*It's late and I'm tired—am I the only one this is making sense to?


The driving days are our bread days: the beginning and end of our trip. On Friday we didn't do any "traveling" so that's the PB&J of our Idaho Sandwich, if you will.
Posted by Nancy at 1:36 AM