Would you believe me if I told you that I'm not sore at all? Because I'm not.
I'm kind of surprised about it, myself, because I was sore for nearly two weeks after the half marathon. I was sore for probably a day and a half after the full marathon. Not too shabby.
It was a fun race; I stuck with Wendy the whole time, and I'm glad I did because there is no way I would have been able to finish without her. The first twenty miles were pretty standard; we were tired by the time we had finished that much but by no means worn out. After mile 21 is really when I started to feel it. We were so close and yet so far.
A marathon isn't 13.1 miles and then 13.1 miles. It's 20 miles and then 6 miles. And those last six miles are killer.
Andrew met us just after mile 19 to take our sweaters—which we definitely needed in the early hour mornings—and running packs. It felt so good to shed those few pounds before embarking on the final leg of our journey. 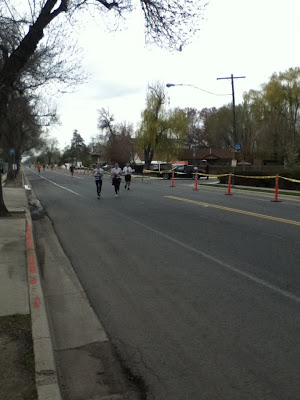 Andrew had to walk nine blocks or something to meet us on the course and he jokingly complained about his "long" walk for the rest of the day. "Man, my feet are killing me! he'd joke, "Will you rub them for me?" 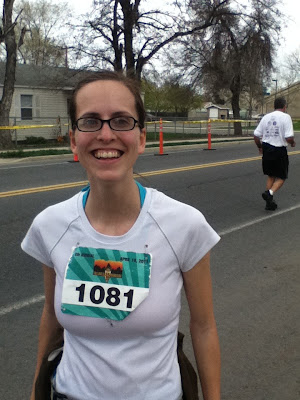 We only talked for a minute before I bid him adieu and took off running again. 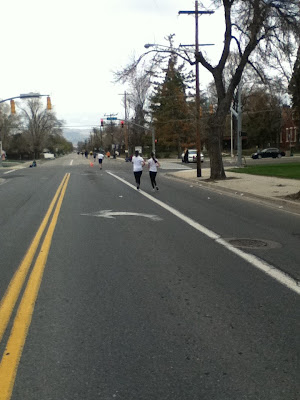 It would be over an hour before I'd see him again. That's right. It took us well over an hour to run the last six miles of the course. Sometime after we passed mile 21 Wendy suggested we needed to come up with a coping strategy—a plan for how we'd get through the next five miles.
"I don't know," I said, "Do you have any ideas?"
"How about we just run until we can't any more and then we walk for a while and then we run again until we can't go any further?"
"Sounds good."
"Do you want to walk for a bit, then?"
"Sure."
And that's how we fell into our run/walk/run/walk routine.
There were several times when I was about to dissolve into tears, but I never did. That's another thing that surprised me—I kept things together the whole time. Basically. 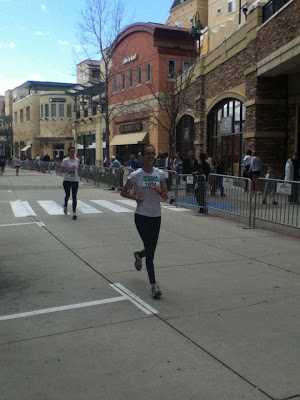 Andrew was waiting with a couple of Wendy's boys just one turn away from the finish line (her husband, also an Andrew, was watching from a balcony with another one of their kids). After I waved at Andrew I made a mad dash for the finish line—even though it felt like I was sprinting, I'm quite sure I was just about crawling.
My cousin Jen (on the Layton side) met me at the finish line—she ran the marathon last year and volunteered for it this year since she didn't feel she'd have time to prep for it while going to school full time. She put a finisher's medal around my neck and gave me a hug. It was just about all I could do to not completely collapse into her arms.
I clocked in at 4:58:56. My unspoken goal was to finish under five hours, though I kept telling myself that time wasn't important, so it was nice to meet that goal—barely. I ran the whole race without an iPod,  too, which is a feat in and of itself. So many runners are dependent on music and I wanted to try to talk myself through this by myself (well, and with Wendy).
My first thoughts when I crossed the finish line were actually about running another marathon, which surprised me. There were a lot of things in this race that surprised me about myself.
I actually did it!
That actually wasn't so bad!
I could totally do this again!
I probably will run another marathon, though I'm not sure when since races are so stinking expensive.
Do you know what's also expensive? Marathon pictures. They had professional race photographers taking pictures and then they sent us an email telling us we could look at them and purchase them, if we wanted to. So I looked at them (you can, too) but we won't be purchasing any of them.
$44.95 to download a single photo?
I don't think so. You can buy a small country for that price...or at least a small camera.
Okay, then, we'll just order a print. Just one, little 5x7 photograph. How much would that cost us?

Is this some kind of a joke?

The sad part is that Andrew forgot the camera at home so he took these photos on his iPod touch. Not that I really need high-quality photos of me all sweaty and weary, anyway. No, I think I'll save my $44.95 to pay for another race.

Recovery wasn't too bad. All I wanted to do for a few days after the race was sleep, and so I've allowed myself luxurious naps everyday since Saturday. Today I only napped for twenty minutes, though, so I think I'm just about over my exhaustion-shock. I also tried to continue to eat more than necessary—kind of post-race carbo-loading.

I haven't gone for a run yet but I'm almost feeling normal so maybe I'll start running again soon. There is so much advice out there for how to recover (and prepare) for a marathon and most of that information is contradictory. I read on one runner's blog to never sleep after a marathon until you go to bed at night but then in the magazine they gave us before the race it specifically said to reward yourself with a nap when you get home. I think the most important thing to do is to listen to your body, so I took a nap because that's what my body was craving.
Posted by Nancy at 12:01 AM