Things were busy on Easter so we didn't do our annual Easter Egg Smackdown until Monday. Daddy didn't participate since he was on an airplane on his way to Ghana (spoilsport!) so it was just me and the girls. We did a very small bracket, competing with only four eggs, because I wasn't sure how long the girls' attention spans would last. They actually seemed to rather enjoy it so I'm glad that we did it even though keeping traditions alive is hard work.
Rachel placed two of her eggs in the competition: Miriam and Piggy. One of them was yellow and one of them was pink but she kept switching around the names and the colours so eventually I just decided for her—Piggy was yellow and Miriam was pink. It seems backwards but I think it was because it was the last combination that she said so I took it as her final word and wrote it on the bracket. 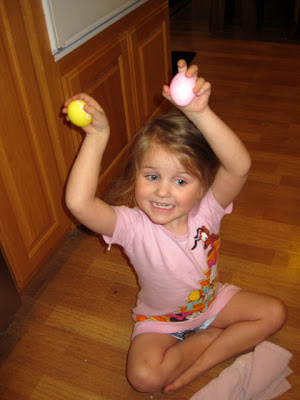 Miriam dubbed her egg Ashushushammy. Or something like that. 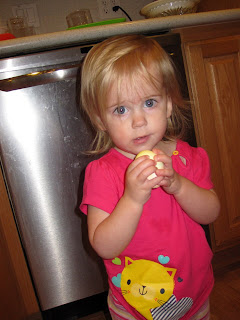 Rachel named my egg Tiger even though it is clearly supposed to be a mouse. That helped me feel justified in potentially mismatching the colour of her eggs with their names.

The girls had fun rolling their eggs at each other, though it took them several tries before they actually managed to get a good smack. Sometimes Miriam would forget to roll her egg and Rachel's egg would come to rest between Miriam's legs... 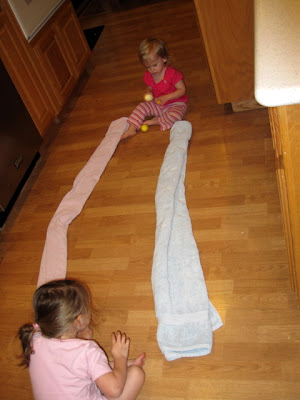 Other times Rachel's egg would zoom under Miriam's legs and crash into the wall...

Tiger came out on top with Piggy in close second. I'm just impressed that Piggy survived hitting the wall at all. 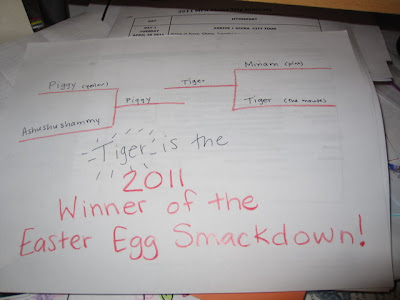 With this year's Easter Egg Smackdown behind us we peeled our bedraggled eggs and prepared some egg salad sandwiches for lunch. 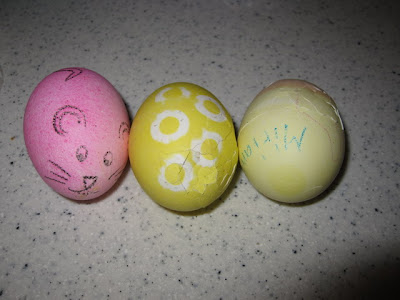 One benefit of rolling the eggs all over the floor until they're cracked all over is that it makes them rather easy for little fingers to peel. Rachel had fun helping. 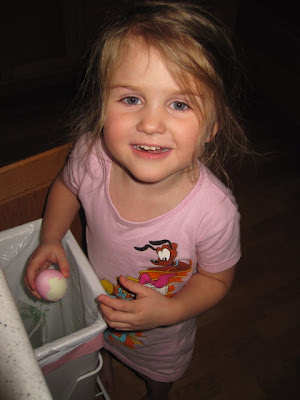