Last night we went to see Naanii and Auntie Josie perform with Bintang Wahyu, the BYU Gamelan troupe. Gamelan is a type of musical ensemble from Bali in Indonesia, though in this case it is an ensemble from BYU. Dr. Jeremy Grimshaw founded the group in 2008 after returning from a trip to Bali. Surprisingly, this was his first trip to Bali; he had joined a Balinese Gamelan ensemble at the Eastman School of Music where he was doing graduate coursework years previously, fell in love with it, and studied it for several years in the United States and even purchased some instruments while studying at Denison University.
Now he purchases his instruments "from carvers in the shop of I Wayan Beratha, Bali's most revered composer and instrument builder."* Since Hindu are so open to other religion, Dr. Grimshaw asked if we could have some Latter-day Saint iconography incorporated into the decorations on the instruments; Beratha obliged his request so if you look closely at the instruments you might be surprised to find the sunstone from the Nauvoo temple or other such images. 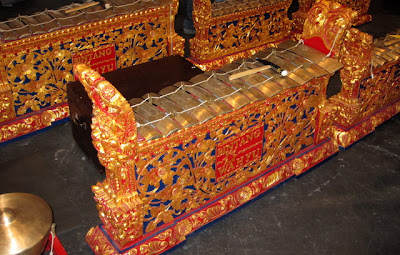 The name of the group, itself, Bintang Wahyu, is a play on words. My mom couldn't remember what it means in Balinese, but they chose the words specifically because for the B. Wahyu (BYU) reference.
When my mom invited us to come watch them perform, she told Rachel that there would be drums and music and dancing.
"Will there be ballerinas?" Rachel asked.
"No," I said, "But there will be Bali-rinas."
Hahaha. Get it? I'm so funny.
The concert was very enjoyable—my mom and sister have been doing this since the group formed in 2008 and my mom said this was the first time she felt really comfortable with her part. They sounded wonderful.
If you're interested in viewing/listening, you can do so here, here, here, here, and here, at least as long as the links work. They're facebook links and sometimes those change randomly...
It doesn't look like the kecak got filmed, which is unfortunate because it was highly entertaining. Kecak is Bali's famous "Monkey Chant." They had a chorus that chanted through the whole number and two dancers—a monkey and a demon—came out and "fought" on stage. It was an abbreviated kecak since usually kecaks are about an hour and a half long. Rachel really enjoyed this, even though she found the demon most frightening. I know other children in the audience enjoyed it, as well as the grown ups.
The last number was a Joged, a courting dance. Two Balinese women danced on stage and then chose members from the audience to come on stage and dance with them, mostly to showcase their victims poor dancing skills for the amusement of the audience. Rachel wanted to be picked so badly; unfortunately, the audience was large and only six people got picked and Rachel was not one of them. She was sobbing when the performance ended.
Luckily for her, Auntie Josie ran off stage and took Rachel behind the scenes to meet the dancers. Rachel was in heaven. So were the dancers.
It was just like Egypt all over again: I want to kiss you! Let me kiss you!
Rachel was surprisingly cooperative. 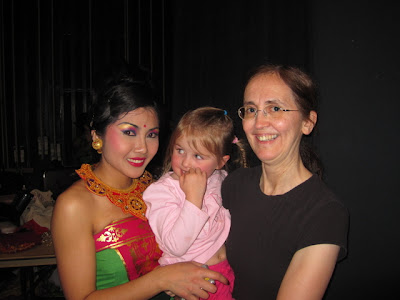 This is the niece of the family who flew out to Utah to help with this performance. I'm not sure what her name is...Luh Made Dwi Wahyui?
Balinese dancing is so interesting—their choreography is so precise, down to eye movements and finger wiggles. They don't do any big leaps or spins, at least, they didn't last night, but it still looked rather complicated. I'm not sure I could pull off all the facial expressions they do while they are dancing with my sunken, European-style eyes. 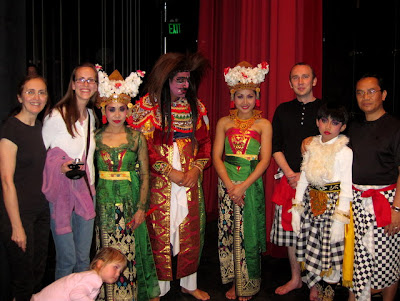 And here's everybody (L to R): my mom, me, Ni Ketut Marni (from Kebon, Bali), Dave Hernandez (who played the demon; not from Bali), Luh Made Dwi Wahyui, some guy, the son (of Marni and Lasmawa), I Made Lasmawa (from Bangah, Bali). Rachel's doing something weird in the front.
We also got to try playing the instruments, which was fun. I can't tell you the names of the instruments, though my mom probably can. I can tell you that you have to hit them hard with the mallets in order to make any sound. Rachel also got to play around with the gongs a bit—she would hit them with the mallet and then put her head inside so she could feel the air vibrate. 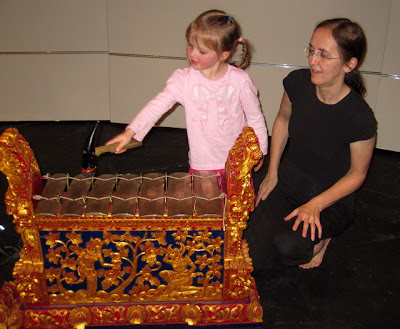 It was definitely a fun evening, though it was so exciting that some of us didn't go to bed until 11:30 PM (*cough*Rachel*cough*).
When we got home I tried to look up Bali to learn more about it but I'm forever confusing Bali and Mali so I typed in Mali and read that it was a "land-locked country in Africa." I knew that couldn't be right but I couldn't figure out where I went wrong. Eventually I discovered that Bali is an island in Indonesia, and it looks beautiful and fascinating. I told Andrew that if we ever ended up moving to Indonesia that I would most definitely be okay with it.
* From the program.
Posted by Nancy at 5:47 PM