Rachel's got a school performance coming up next week. She was a little bummed out that Naanii was here two weeks before the performance and that Grandma won't arrive until two weeks after it, but she'll get over it.

The entire grade one cohort has been working on the show—Welcome to the Jungle—since the beginning of the school year. Each class was assigned an animal to be—monkey, giraffe, hippo, or elephant—and each student is responsible for coming up with their own costume. Rachel's class are all elephants and for months now Rachel's been bugging me about making an elephant hat for/with her. We finally started it on one of our snow days last month.

I thought about crocheting the actual hat part for her but then I realized that I would just have to do that part myself (since I haven't had the patience to teach her to crochet yet) so instead we made it on the knifty knitter. She ended up doing quite a bit of it herself.

A few days ago I finally sat down and made some ears for it and let it sit for a while before picking it up again last night when in a fit of passion (or something) I made a trunk and eyes for it and put the whole thing together.

Rachel was quite pleased with the finished product when she saw it this morning. All the kids were, actually. Here's a picture of Miriam modeling the hat this afternoon (and yes—she wore that outfit all day (and yes—we left the house on more than one occasion)): 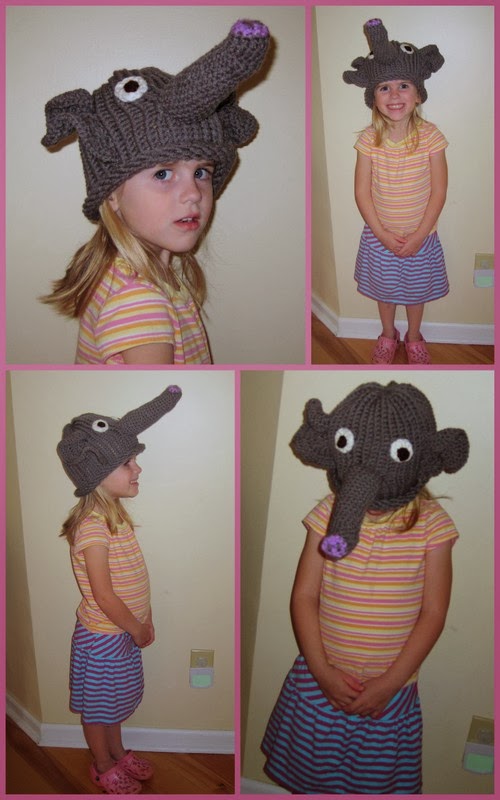 Obviously Rachel will be an Asian elephant—the ears are a tad small—but she'll just have to do her best to fit in with her African counterparts.

Except that I just looked up lions on wikipedia and—turns out!—lions "exist as a single isolated population in India's Gujarat State" so it's totally possible that The Lion and The Mouse took place in India, not Africa. And in fact, there's a similar story (featuring an elephant instead of a lion) in the Panchatantra.

All of that is well and fine except that Rachel's version of the story involves (somehow) a population of hippos and giraffes. While an extinct species of giraffes used to live in India, hippos are pretty well isolated to the African continent throughout history.

Rachel's happy with it, though, and that's all that matters. I can't wait to see her show—she's been so excited about it!
Posted by Nancy at 10:35 PM