We just arrived home from a whirlwind trip down to Georgia to pick up my mom from a conference she was attending there so we could bring her to our house for a few days. Although we had second thoughts about going (we found a plane ticket for less than $150 the night before and it was really tempting) it ended up being a good trip. The kids were so excited to go and were fantastic travelers.

I checked Rachel out from school early on Friday (something she's been dying to experience) so we could leave as soon as Andrew got out of class. We drove straight through the afternoon—stopping only to refill the gas tank and for many, many potty breaks. Benjamin conceded on Thursday that potty training was a good idea (something I've been trying to convince him for months now) and stayed dry the entire day. I was worried about potty training on a road trip but Benjamin really proved his bladder control and didn't have a single accident (though we did put him in diapers just in case).

Benjamin read book after book after book in the car (and by read I mean he flipped through the pages and looked at the pictures), we watched 1.5 movies, Rachel did a lot of reading, Miriam did a lot of drawing. We also packed some magnetic "paper" dolls, some favourite stuffed animals, and lots of snacks.

Oddly enough both Benjamin and Rachel took naps while Miriam did not. That was a little backward from an ordinary day. 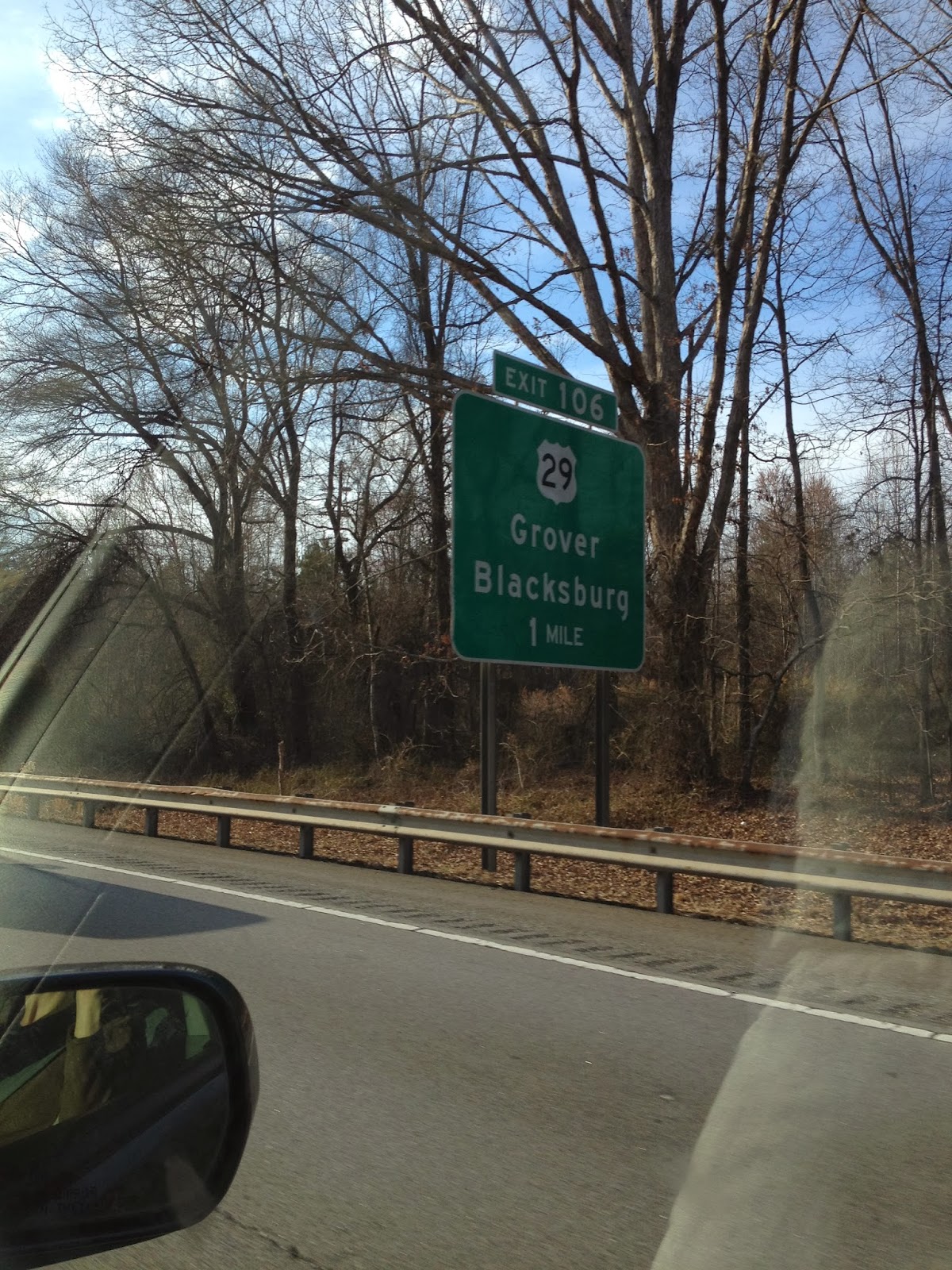 Grover, Utah, (née Carcass Creek) is an "unincorporated community" (pop. negligible (ie. less than 50)) near Capitol Reef National Park. It was also renamed after Grover Cleveland (in the early 1890s). I am certainly in favour of the name change! Andrew's aunt owns a cabin in Grover and his family take advantage of it by planning an annual camping trip—most trips are wonderful; last's year's was not (not at all).

It's funny how a single word can stir up so many emotions—fond memories, funny memories, intense pangs of grief.

Grover is where people fall in love, where friendships are forged, where pregnancies are announced, where mission calls are open. It's where Andrew's family was when our first child was born (we were not there, thank goodness, but everyone else was). It's full of rock forts and memories and traditions. And now it's full of so much loss and sorrow and I'm not sure how to weave those feelings into the meaning of the word for me. It seems so at odds with what the word has always meant—a fun time to be had by all. I'm sure that Grover will always carry a bit of a scar in that regard; but I'm equally sure that the wound will heal—at least well enough to leave the scar—and that Grover will increase in sacredness (for our family) for that reason. It will add a hint of solemnity to future trips—but I hope that there will be trips in the future because Grover was a place that Dorothy loved.

You guys—the word Grover is making me cry! Moving on...

We also saw this gigantic peach: 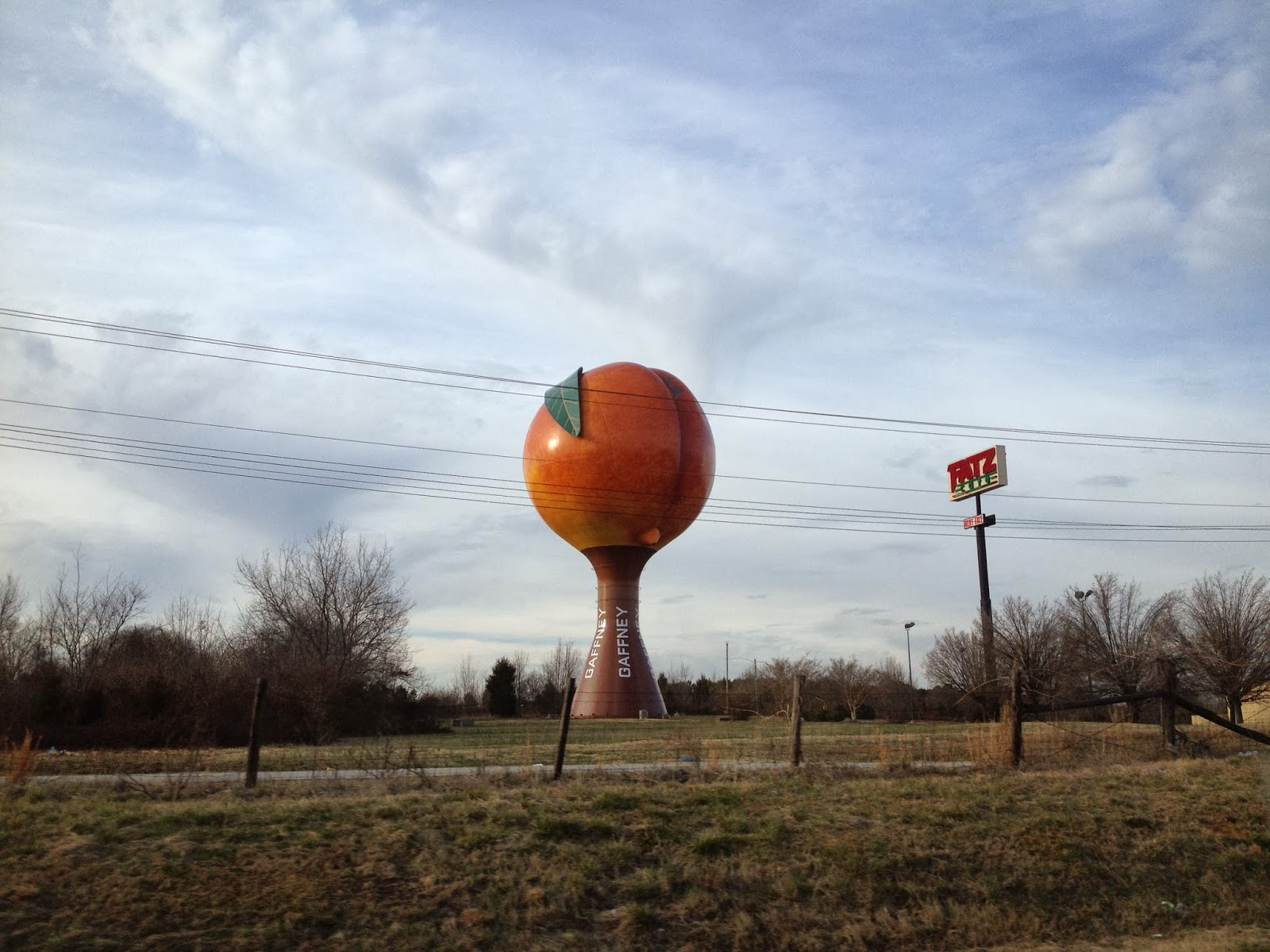 It's in a place called Gaffney, South Carolina. Georgia is typically known for its peaches but South Carolina grows their fair share and Gaffney is "the peach capitol of South Carolina." Now you know (we were a bit confused by it as well).

It gave us something to look forward to on the way home. The girls thought it was hilarious (and wondered if it were real—it's not real, by the way. We're pretty sure it's a water tower).

I've always found that road trips (and traveling in general) help me with geography. There's just something about physically crossing state/province/country lines that helps me solidify where things are on a map. The only reason I know that from south to north it goes Lithuania, Latvia, and then Estonia is because of a trip I took while renewing my visa while living in Russia. I'm not joking. That is quite literally the only reason I know that.

Road trips are educational for my children, too. Both girls spent hours (probably) playing cartographer and created beautiful maps of the world.

Here's a sort of pangaeaic model that Rachel drafted: 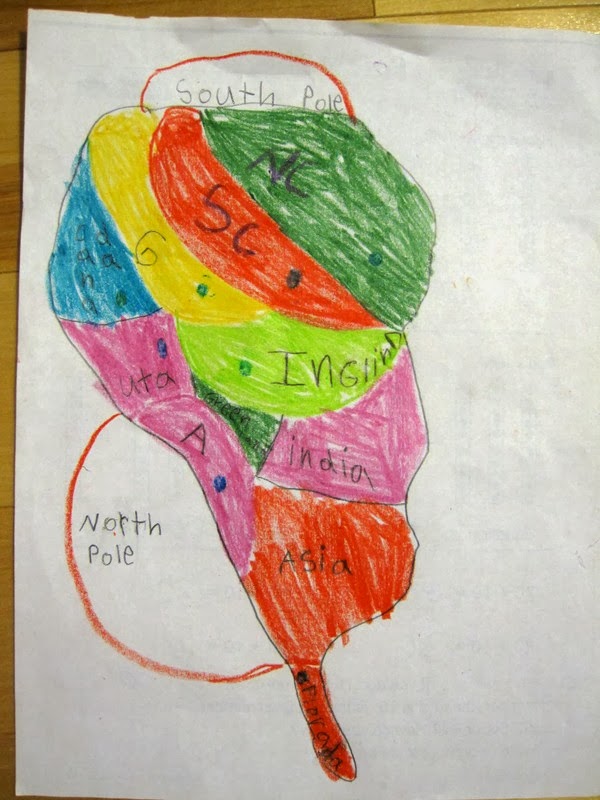 She kept asking me if she was doing it right and I kept telling her that she wasn't and then she kept getting upset with me.

"And it's a beautiful and creative drawing. It's also inaccurate; nothing's in the right place. It's fine and it's lovely but I can't tell you that you're doing it right. Sorry." I hope that wasn't too harsh...

I really do think it's an amazing map. Understanding how the world is (so crazily) divided is difficult for children to wrap their minds around. My house, my neighbourhood, my city/town/borough/whatever, my county/region/whatever, my state/province/whatever, my country, my continent, my planet, my solar system, my universe. It's all so mind blowing.

You will notice that she got North Carolina, South Carolina, and Georgia in the right order. That's thanks to the road trip, I'm sure. I love how she put the Floridian peninsula at the bottom of her map—it's a rather iconic part of the shape of the United States. She's also got England, India, Greenland, Canada, and Utah on her map, as well as the north and south poles (which are flipped, showing her disloyalty to traditional maps (hipster child)). Also of note are the blue dots, representing capitol cities.

Here's Miriam's map of the world: 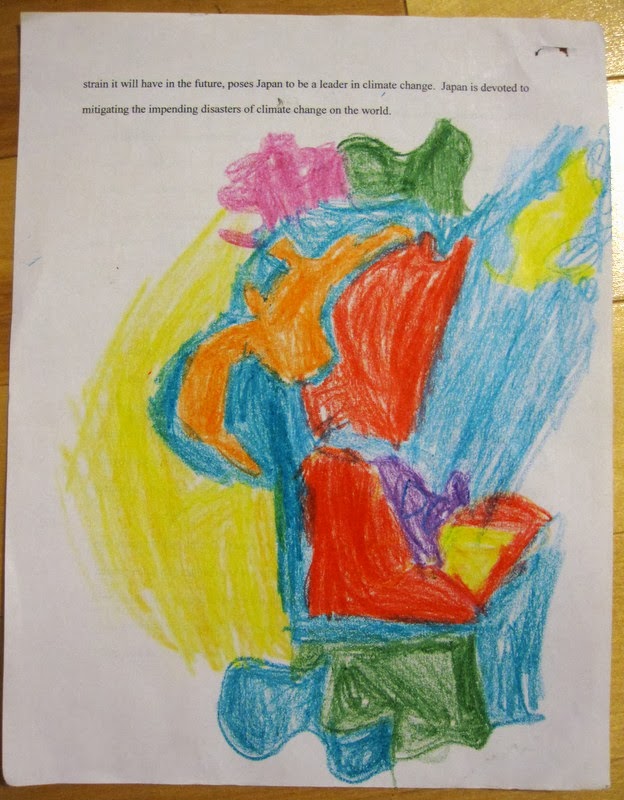 Her map had a verbal legend. I can't remember what all the blobs are now but the blue stuff, if I remember correctly, is water. I know she had NC, SC, and Georgia on there somewhere, as well as other places (cities, countries, whatever) that struck her fancy. I love how this is drawn on the backside of a paper Andrew graded last semester—talking about how "Japan is devoted to mitigating the impending disasters of climate change on the world." It seems fitting somehow.

This is a map Rachel drew of the world's waterways: 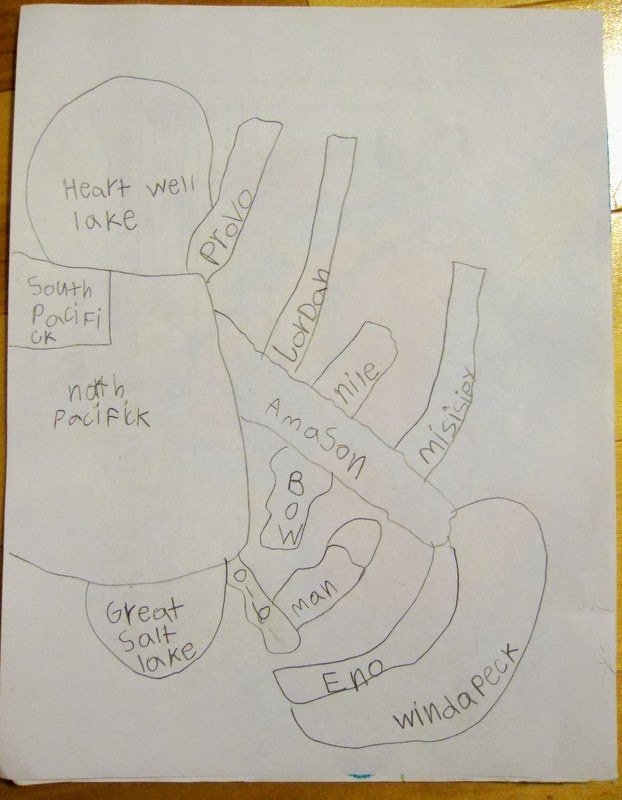 She took her inspiration from her life, a sign we drove past, and by polling her (captive/trapped) audience. Most of her words are easy to make out but a few might need some explanation.

Windapeck is how Rachel understood my mom's suggestion of "Lake Winnipeg."

The Bow River is in Calgary (and other places, but Calgary when I knew it). The Eno is our river here. The Provo River is in the Provo Canyon. The Great Salt Lake should be self explanatory, as should the Amazon, Nile, and Jordan.

South Pacific and North Pacific (polarities reversed again) are from her mind. I'm not sure why she included both north and south. I do know she needs to learn that north is typically on the top of the page. I also think we need to teach her how to spell Mississippi (because knowing how to do that is super fun).

Anyway, those maps mostly came from the way home though Miriam drew several on the way there as well. Most of hers looked about the same as the one I posted (which is why I only posted one of hers).

We got to Atlanta a little later than we'd hoped to—having had run into some random traffic jams out in the middle of no where—but our friends had dinner waiting for us.

It was so fun to see the Fugates after so many years. We knew them in Cairo. Jennifer helped me prepare for Miriam's birth (her son Abraham is a little bit older than Miriam). She talked to me about her experience of birthing a baby in Cairo, gave recommendations for doctors, and offered some baby supplies to me (a bouncer and some newborn cloth diapers, both of which were incredibly helpful).

Since Cairo we've each had another baby. Both our births were relatively traumatic. Jennifer's was quite traumatic on her body. Mine was more traumatic for Benjamin, physically speaking. Both were traumatic emotionally.

I recently read a book—more like a pamphlet, really—on healing emotionally after a traumatic birth and it said that talking about the birth (and talking about it and talking about it and talking about it) was a perfectly healthy and healing thing to do. Sometimes this can annoy "outsiders" who get sick of you rehashing the details, but it's emotionally important to do so. Even—yup—nearly two years later for me. I'm sure I'll eventually get to the point where I don't have to talk about it but until I do, it's nice to have these kindred mothers to share stories with (Jennifer is certainly a kindred mother for me—I picked her brain on birthing abroad and she picked my brain on delivering a preterm baby).

It was wonderful to get to meet her new little guy in person and it was so fun to see Max and Benjamin interact. Benjamin was so sweet with him—he kept crouching down beside him (Max can't walk quite yet) and patting his back. It was also fun to see how big her older boys have gotten and to let the kids run around like maniacs, bashing each other with balloons, until far too late in the evening.

Winding those children down for the night was quite the feat, but we managed.
Posted by Nancy at 12:15 AM