This afternoon Miriam found instructions to build a rainbow out of LEGO and followed them precisely. 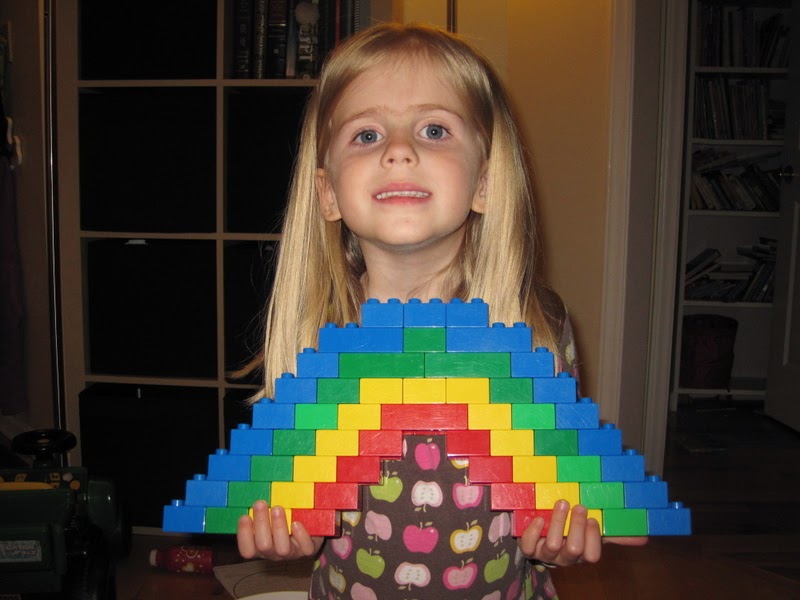 She was so proud of her work, but when Rachel came home she said, "Who put together that backwards rainbow?" Miriam quickly came to the defense of her creation. "It's not backwards!" she spat out.

"It is so backwards," Rachel said. "The colours of the rainbow are red, orange, yellow, green, blue, indigo, and violet—in that order. Your rainbow has blue on the outside and red on the inside. It's backwards."

"But I followed the instructions perfectly!" Miriam wailed and pulled them up for Rachel to see. 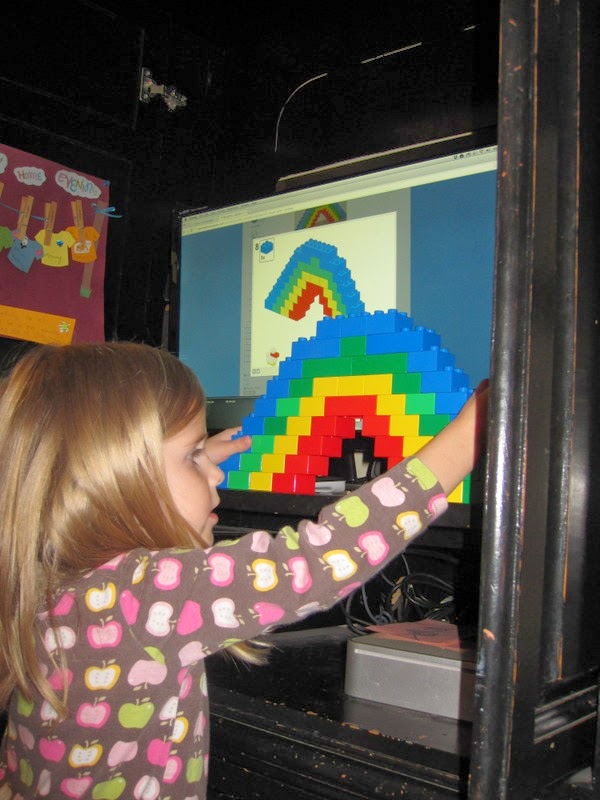 "Then the instructions were wrong but Miriam followed them correctly," I said, trying to smooth all ruffled feathers.

Rachel eventually huffed off to read Harry Potter while Miriam sulkily put together a few new creations, mumbling about faulty instruction manuals and vowing to reverse the colours the next time she makes a rainbow. I made dinner.

Miriam was not a fan. Rachel gave it a passing grade. Benjamin loved it. 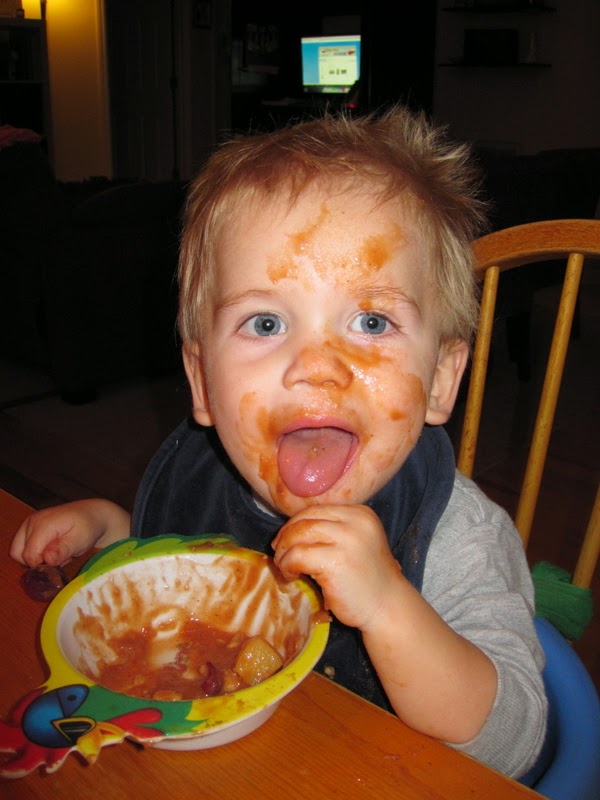 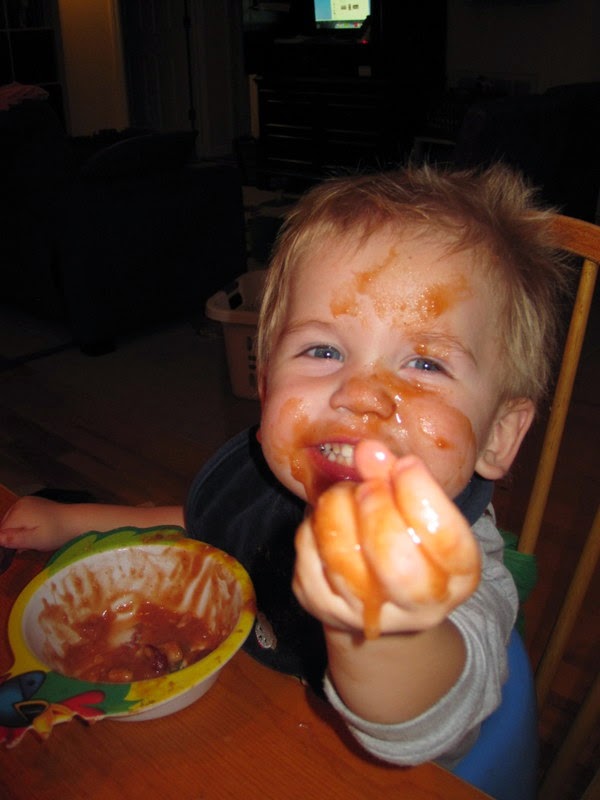 After dinner we tidied up and settled down to practice our ukuleles. I was tuning them when Andrew walked in the door and mercifully took Benjamin from me. Benjamin thinks it's treacherous that he doesn't have a ukulele of his own.

Rachel knows more chords though and is better at following along with the music. Rachel's been working really hard on G7, which is a three-finger chord. It's proven pretty tricky, but she can nearly work through the entire C major chord progression (from C to G7 to F (we haven't approached G yet and are simply using G7 in its place)).

It used to be that I would be the task master, forcing them to switch from F to C7 to F to C7 and back again. Now they do it on their own. "Look at how fast I can switch!" they say excitedly.

They enjoy practicing songs as well, but tonight they got bored of that quickly and said they just wanted to keep practicing switching between chords. Who knew they would ever pick up on this?

At Christmas it was almost like pulling teeth to get them to play the C chord, let alone ask them to attempt a different chord.

Speaking of pulling teeth, Rachel's almost got a second tooth ready to fall out of her mouth. Every night when we're getting ready for scriptures she begins fretting about her tooth, needing to get a piece of toilet paper so she can grip it more firmly while wiggling it, and asking us to test it for readiness. It's not quite ready yet but it's getting close.

We're reading Charlotte's Web again (after we do some picture books for Benjamin). Rachel's on a repeat circuit now that Miriam's old enough to be interested in reading a longer story...but kind of too young to really appreciate the Narnia books yet. Since Rachel's reading such advanced literature on her own (Harry Potter 7—what?!) I figured I could take things down a notch and read some simpler books for Miriam. Charlotte's Web is such a charming story that Miriam always asks for a second chapter and Rachel has decided to sit in while we read it.

When my story time is over the girls head off to bed for their own reading time. Miriam's reading lessons are slow going. We haven't touched the book (How to Teach Your Child to Read in 100 Easy Lessons) in ages. I don't mind if we never finish the book. Miriam's reading well enough to get through Dick and Jane and The Berenstain Bears and things on that level on her own. She's only four so I think she's doing fine. After all, Rachel sat through about ten of those reading lessons (kicking and screaming all the way (perhaps it wasn't even ten (I can't imagine actually sitting through ten lessons with her; she was quite adamantly opposed to reading lessons)).

While the girls read to themselves, I do some singing/cuddle/nursing time with Benjamin. He's been loving Here's a Ball for Baby and Pat-a-Cake lately.

Our nursing chapter is slowly coming to a close. Although he wouldn't dream of going to bed without nursing (not if he can help it, anyway) he certainly didn't nurse very much this evening, asking (after a while) that we instead to sing some songs together. When it was obvious singing was beginning to wind him up rather than wind him down I suggested he find the stuffed puppy he borrowed from Rachel and put it to bed, so he did.

I tucked him in, helped him say his prayers, sang him a lullaby, kissed him goodnight (and got bonked in the head by a toy car) and then left him to fall asleep on his own. When I went to check on him later it was evident he'd helped himself to some personal reading time. 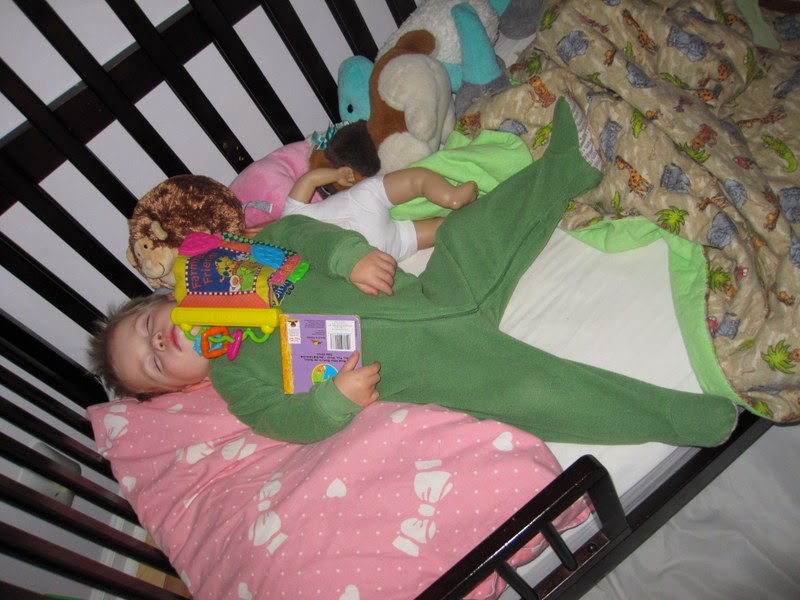 It took us about half an hour to scroll back in time, watching a snippet of a video here and another snippet there.

And I thought to myself, Yup. That's about how fast it goes.
Posted by Nancy at 12:02 AM