Not in Toronto, Day 3

When I planned Trading Tables for the last Saturday in March it was because it was the only Saturday the church was available. I just assumed that Andrew would be around. I completely forgot about his conference!

I sent out an email to our Relief Society begging for assistance. People are usually pretty good at sticking around to help but I wanted to have specific people I could depend on on being there rather than having to recruit while I was there. My volunteers were wonderful!

We set up 10–12 round tables (I can't quite remember) and five rectangle ones, taped signs to the tables, denoting what went where, and were all ready when people started coming to sort out their unwanteds to the designated tables and sift through to find treasures to take home. 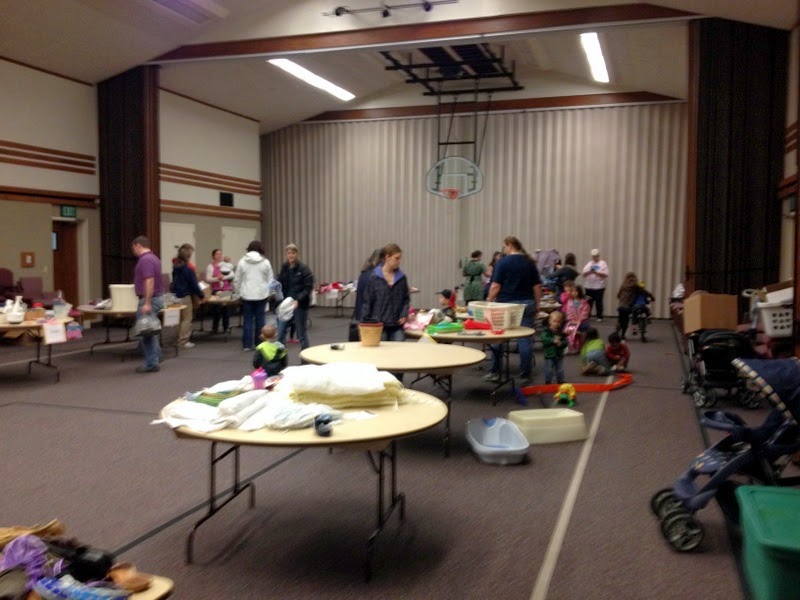 It's always fun to do a little shopping for free and it's a nice way to help others out.

I had a friend (Nicole) come who just became a foster mom to a sweet baby girl. Her youngest girl left babyhood behind years ago so she didn't have much to offer this baby (yet). She made quite a haul! She left with some cute blankets and a bagful of clothes (as well as some toys each of her older children had picked out). I was so glad she came!

We also had an investigator show up with the sister missionaries so that she could pick out some church clothes since she didn't have any and couldn't afford to buy anything new.

One of our nursery leaders showed up to pick through toys to replenish the nursery's stash.

We had several families who were moving come and drop off a bunch of stuff they didn't want to take with them. We had some big ticket items up for grab: a little boy's bike, a stroller, and a slide (though I think only the slide got taken—it was actually our Thanksgiving Slide but now that we have the Christmas Swing Set we don't need it; I'm glad it found a new home).

One of my helpers was my friend Marian. Benjamin loves her baby so, so much! Here are my kids fawning over Baby Jay: 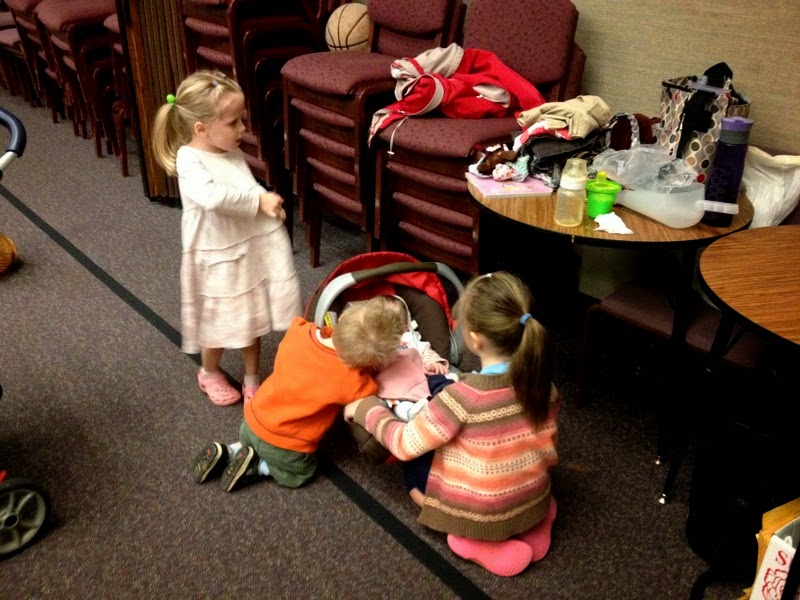 Clean-up is always more of a job than set-up. We pack up everything that's left over and donate it to charity. I don't even know how many bags and boxes were loaded into cars to donate. One friend filled her backseat and trunk with garbage bags full of clothes. My trunk is topped off with boxes of books and a pile of shoes and an old computer monitor and a bunch of other stuff (four boxes, two bags). I think other cars were filled up, too.

I didn't feel like unloading all that stuff again in the pouring rain so I just brought it home and scheduled a VVA pick-up. It's so nice that they do that!

While everyone else was carting stuff out to the cars I folded up the tables and put them away.

Rachel and Miriam were both so excited to "go shopping" on their own. I let them roam the cultural hall without restraint (knowing that I would be bringing stuff home to donate, anyway, so if they picked up something I decided I didn't want to keep around I still had a chance to make it disappear). They were fairly judicious with what they selected and made some pretty good finds.

Miriam fell in love with this dress: 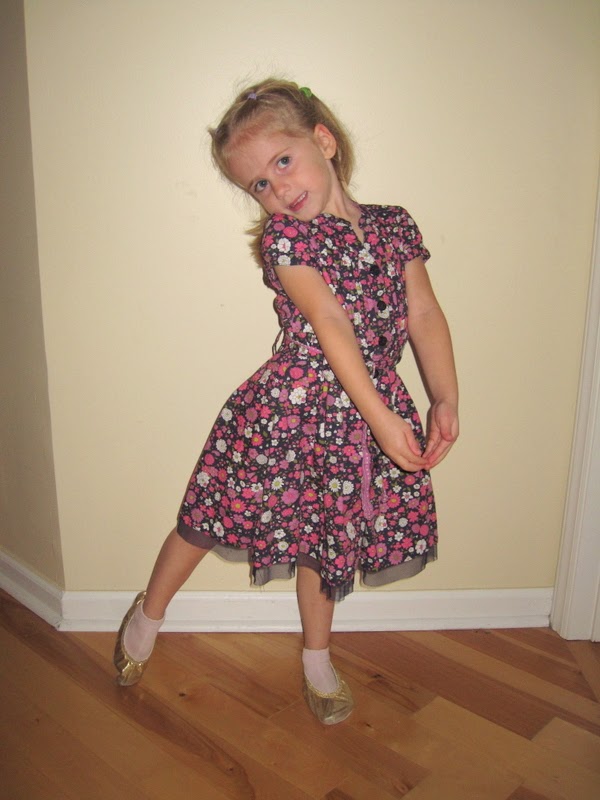 I can't blame her. It's adorable.

She also picked out those golden slippers, which is fair since I got rid of some purple slippers of hers (they had ribbons you had to tie up your legs like ballet slippers and it was super annoying to have to do every time she wanted to dress up so they had to go).

Benjamin found some cars and balls. Once he figured out that we were taking home anything he put in the designated box he ran around collecting toys. This car was his favourite: 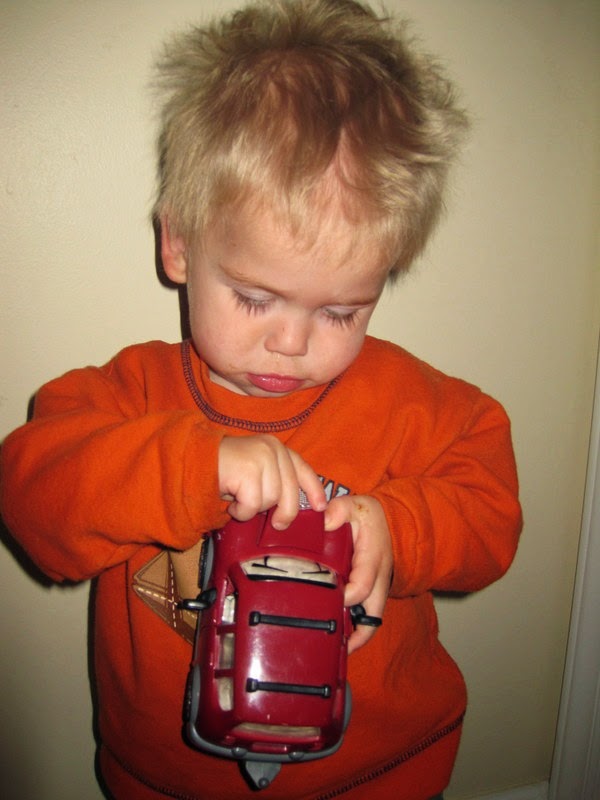 He carried it around the entire morning. It was quite popular with little boys his age—two different boys tried to steal it from him (on multiple occasions) but their mothers made them give it back every time.

Rachel thoughtfully went birthday and Christmas shopping for her siblings (their gifts are hidden in my closet now) before looking for herself. She ended up bringing home an arm rest pillow to put in her reading nook. There are a few in the reading corner at school and she loves them.

She also found a stuffed polar bear and a hula hoop She was unwilling to pose with any of her finds because she wanted to make and eat lunch so she could head over to her friend's house.

I brought home a few dresses to try on and we also swapped out some of our storybooks for some new ones, just to keep things interesting.

I don't really enjoy organizing events but somebody's got to do it, I suppose, and with enough help it doesn't even seem like too big of a job (though I will be sure to select a weekend when I know Andrew will be in town next time)!
Posted by Nancy at 3:38 PM