Here's all the snow we had this afternoon:


It is still drizzling out there and there are icicles forming on my tomato cages (no, I haven't planted tomatoes yet—we're waiting for April—we were just getting ready). The last ice storm we had (the first Thursday in March) knocked the power out for a lot of people, which I'm sure was highly inconvenient. A man was killed on his back deck—a tree fell on him—which is tragic. Branches broke off trees and littered the roads which caused a lot of work for a lot of people.

But this Canadian girl is going to say that having soccer practice this afternoon probably would have been fine. Memories of brutally cold outdoor recesses are flooding my brain. "Go and play!" we were told. Go and play, indeed. It was miserable.

This afternoon was fine soccer weather.

All that aside, I don't usually ask for gifts from Andrew and I don't expect them. I consider myself relatively low-maintenance (Andrew might consider me on the higher end though). For example, there's this "forward" (for lack of a better word) floating around Facebook challenging women to post a picture of their "naked" face (ie. without makeup). A better challenge for me would be to post a picture of myself with makeup.

Anyway, we were grocery shopping together, which is something we usually do as a family just because of how things have worked for the past eight years. We've only ever had one car (or no car though now we have a car and scooter) and used to go grocery shopping on our way home from campus for the first two years we were at BYU. In Cairo we usually shopped together so that we could have enough man-power to get the groceries home (though we did occasionally shop solo). When we lived at Andrew's parents' house we had an arrangement where Karen did most of the shopping and I did most of the cooking and dishes (which was awesome because I hate grocery shopping). The first year we were here Andrew was too afraid to ride the scooter (we weren't sure if we had to register it or not and then couldn't register it, etc) so I was usually without the car and couldn't do the shopping. It's really only been last semester that Andrew ever took the scooter to school. With the colder weather he's been using the van more. So, we do the shopping together and we when we were at the store together I said, "I really want an orchid for Valentine's Day this year."

"You what? You want something?" Andrew sputtered (he's shocked whenever I want anything other than a nap). "And you're telling me that you want it? And it's a flower of all things?!"

I have this thing with cut flowers. I don't know how I feel about them—like killer whales at Sea World. Sure, they're pretty and stuff but let 'em grow!

But Valentine's Day came and went and I got nothing from Andrew—granted, neither of us left the house because school was cancelled—so I was pleasantly surprised when he bustled through the door the following day (which was Saturday, sure, but he had a make-up class to attend from the snow day before) and presented me with my very own orchid. 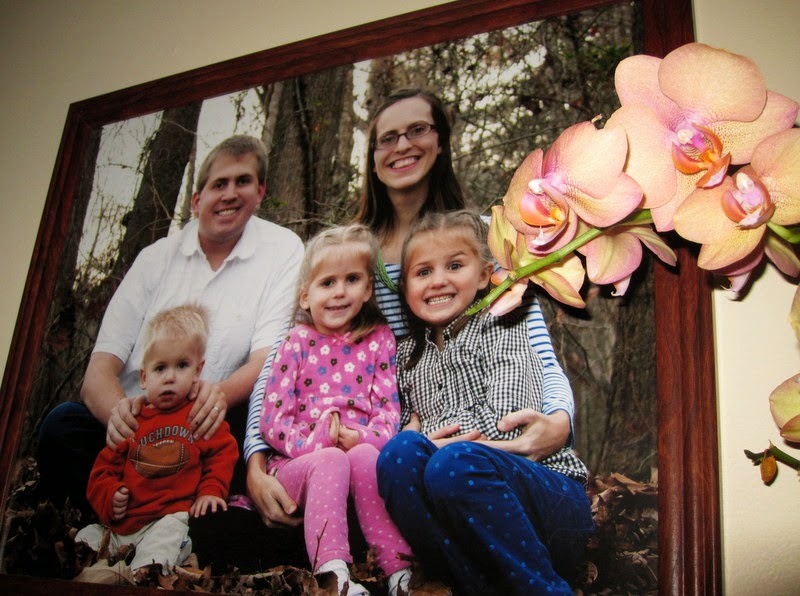 I think it's gorgeous. It lived on the mantel for a while but I've since moved it to be closer to the poinsettias from Christmas (that are still alive and well) since plants are social...uh...creatures. Our orchid has been with us for just over a month now and it's just as beautiful as the day Andrew brought it home (which is another reason I prefer potted plants to cut flowers—they're less fleeting).

Orchids are relatively easy (for me) to care for since they only want a lukewarm drink about once a week. I can totally do that. I also seem to have a penchant for keeping poinsettias alive. Andrew ruthlessly murdered last Christmas's poinsettias sometime in the summer because he got sick of them (you know how he is about Christmas) but I'm hoping I can keep these ones around for as long as possible. I just like having plants around even though I have a notorious black thumb (which I've been desperately trying to overcome).

I agreed that they needed to be watered. I typically water them on the weekend (Saturday or Sunday) and today is clearly Monday so I was a little late, but not terribly.

Miriam was full of hilariousness today. She was so excited that it was St. Patrick's Day and wanted to dress all in green but selecting an outfit was rather traumatic for her. She ran out of her room in a huff and said, "Mom, I need to tell you something bad about my pants."

"I don't have any green ones!" she fretted.

"That's alright," I said soothingly. "You have a green shirt. You can wear whatever colour of pants you'd like. Look—I'm wearing a green shirt and black pants."

Miriam threw herself on the couch and dramatically wailed, "But I want to wear all green or nothing!"

When I told her that she wouldn't be permitted to continue her noise-making ventures in such a public space as the living room she ran off to her room sobbing and emerged sometime later wearing a green shirt and black pants.

"Will you do my hair with all green stuff?" she asked hopefully.

She came out of the bathroom holding two green hair elastics, a green clip, and trailing a green ribbon behind her. I sat down on the couch and she sat down in front of me so I could work my magic (such as it is—hairdressing, like keeping houseplants, isn't something I'd list in my top ten talents).

After I'd brushed her hair and was twisting the first hair elastic around a fistful of hair, Benjamin picked up the brush and started—gently and neatly—brushing the back of her hair.

I tsked my tongue at her and muttered, "Okay, then, Miss Hyperbole."

She was on such a roll the whole day. I was doing everything in my power to not laugh out loud at her.

As soon as she was sufficiently verdigris-ed she began asking me about fauns. At first I thought she was asking about baby deer. It was only when I recognized she was actually referring to leprechauns that I realized she was confusing them with mythological fauns not sweet Bambi fawns.

"Did a faun come to leave us some gold coins to hunt for or is it too rainy for fauns? I don't know that fauns like to play in the rain. Do they?"

"Yes. A leprefaun. Last year a leprefaun left us coins to hunt in the backyard!"

"Yeah, I don't think the leprechaun could brave the storm," I said, glancing out the window at the pathetic drizzle—that hadn't even managed to wet our entire driveway—and thanking my lucky stars that Miriam is a southern girl through and through by this point in her life.

I escaped to scrawl a little leprechaun note to leave in the fairy hotel, promising to leave gold coins (and by gold coins I mean little circles I cut out of construction paper—keep their expectations low, that's my motto).

"Dear Miriam and Rachel," it said. "It was a little cramped but I enjoyed my stay in your faerie hotel. It was nice to get out of the rain! I will leave you some gold coins on the next sunny day! Happy St. Patrick's Day! Love, Lennie the Leprechaun."

After sneaking it into the fairy house I hinted to Miriam that she should check for a note and her face glowed as she uncoded the message.

"Dear Miriam," she read. "My name is first! Look! And Rachel. I think that plus sign means 'and.' Does it? Why? That's weird. I think this note is from a leprefaun! There's a clover on it! Look! But the faun used a plus sign for and. That's so weird. A-N-D is not hard to spell. Why can you use a plus sign for a word that's easy to spell?"

"Well, and is a word that is used often, which is why it gets a symbol. It's faster to use the symbol than to write the whole word out," I explained.

"But why does and need a cymbal at all?" Miriam asked. "Cymbals are for music."

"Yeah, symbol is a homophone. It sounds the same but it means something different," I explained. "A cymbal can be part of a drum set or it can mean something that represents something else. They're spelled differently and..."

"Oh, I get it!" she interrupted. "So cymbals are music but symbols are plus signs!"

Miriam was quite happy with our low-key, rained-in St. Patrick's Day. She wanted a green meal for lunch since I didn't dye her cereal milk green (she claims Andrew has done this before—I frankly can't remember). We had peas and pears and green milk and leftover biscuits (that weren't green) with pulled pork (that also wasn't green).

For dinner we had green german pancakes with pistachio pudding. Everyone was very excited about it. 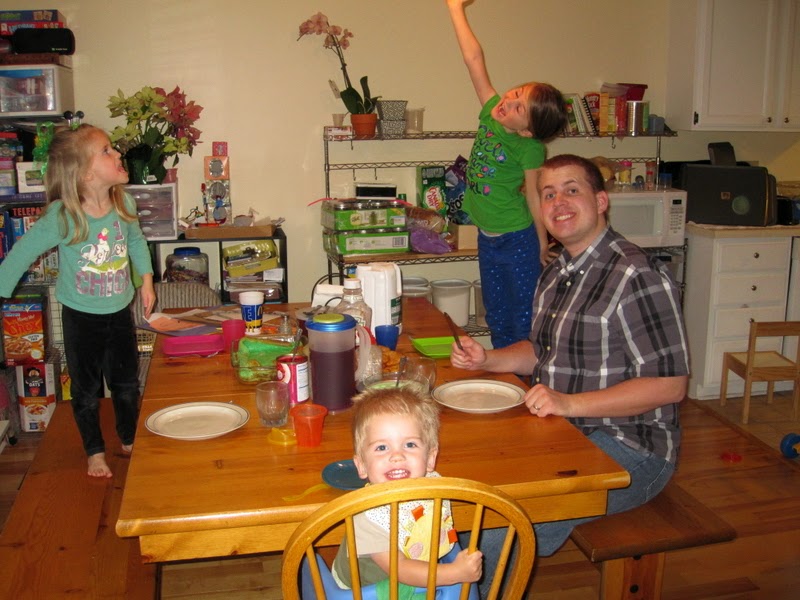 Note my alive (and not even on the verge of death) plants behind Miriam (the stack of Kleenex boxes three storeys high (between the poinsettias and orchid) is the fairy hotel, just fyi): 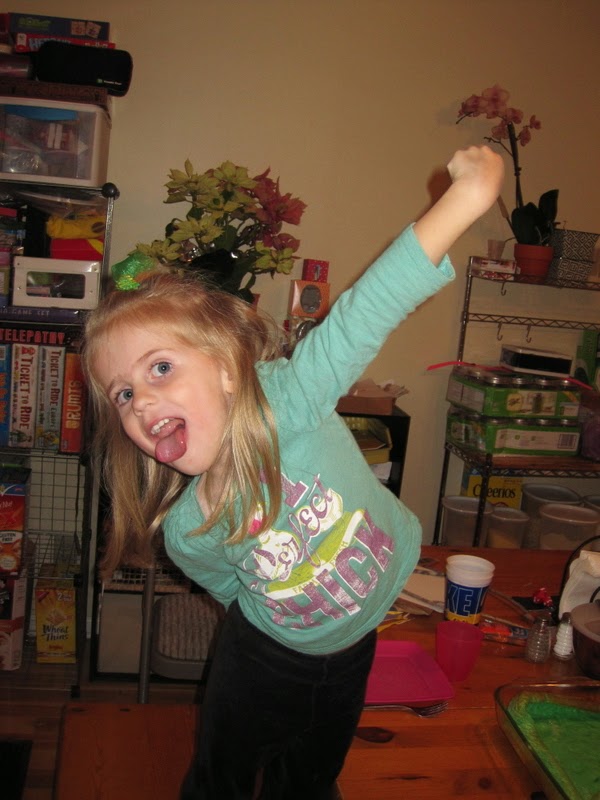 We also had hash browns. Patties for St. Paddy's day. 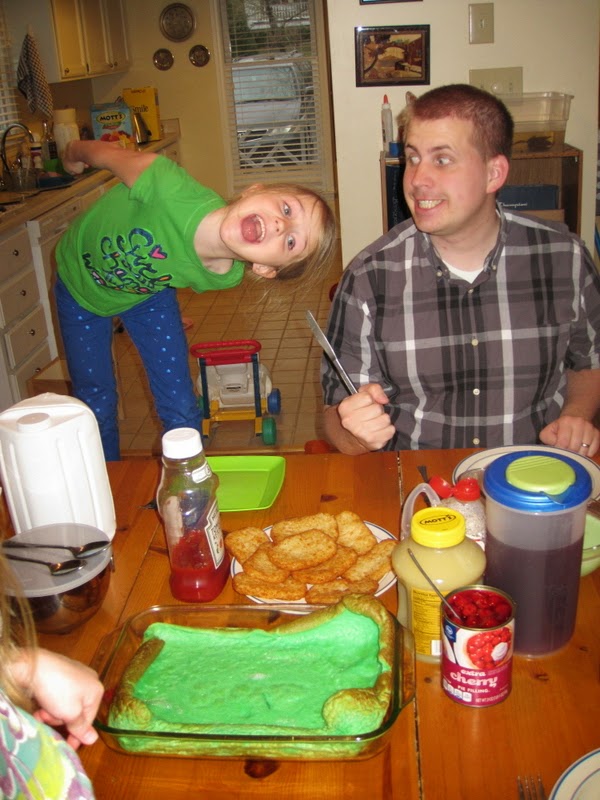 We had FHE after dinner (because we didn't have to rush off to soccer practice) and I gave a lesson on prophets. We played follow-the-leader, talked about Joseph Smith, talked about President Monson and General Conference, and then played pictionary/charades to act out different things various prophets have taught us about (service, love one another, missionary work, family home evening, planting a garden, obeying our parents, and so forth). It was quite a lot of fun and when all that was over we attempted to yank out Rachel's tooth using the old door-and-string method. 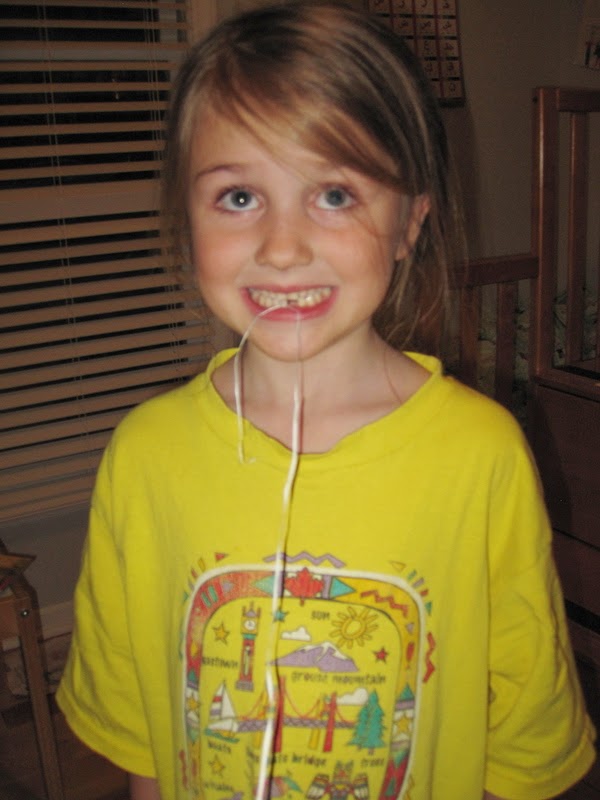 It didn't work. The string kept sliding off her tooth. I'm sure it will come out of her mouth eventually. She stayed up late reading tonight since she can sleep in tomorrow. I don't think it ever occurs to anyone in this family to go to bed at a decent hour so they can wake up at a decent hour to do stuff. Rachel has already discovered that it's easier to read uninterrupted while her siblings are sleeping than when they're awake.

Speaking of sleeping children, Benjamin just woke up crying, found his water bottle, took a drink and put himself back to bed. Happy St. Patrick's Day to me!
Posted by Nancy at 12:15 AM