We met up with Emily and her kids at the Museum of Life and Science today. Her son E. is an ambitious builder and wanted to make a truck with some of the blocks. I don't consider myself a great architect or engineer or anything like that but with all of us working together we managed to cobble together what turned out to be an ice cream truck. 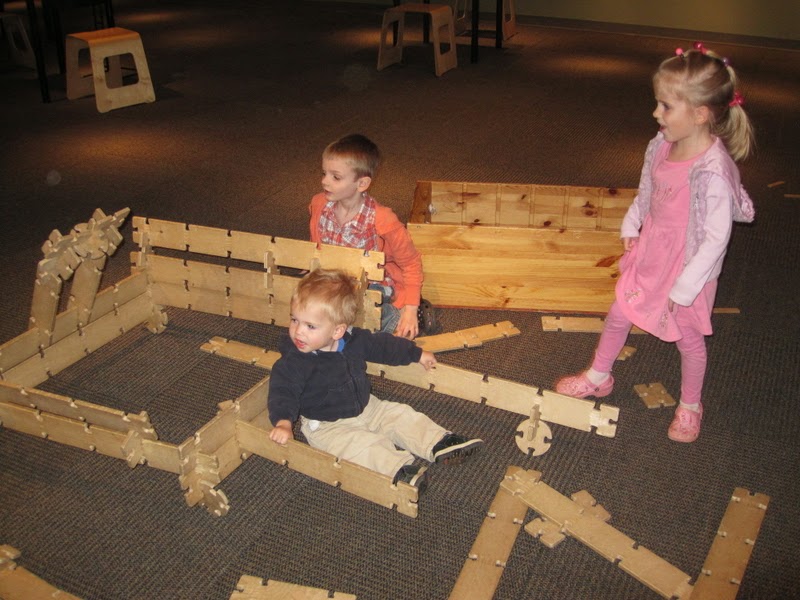 Benjamin's quite funny about the camera and will hardly stand still long enough for me to take a picture because he always wants to see it, sometimes before it's even been taken. "I unna see!" he'll say as he runs to take a look. 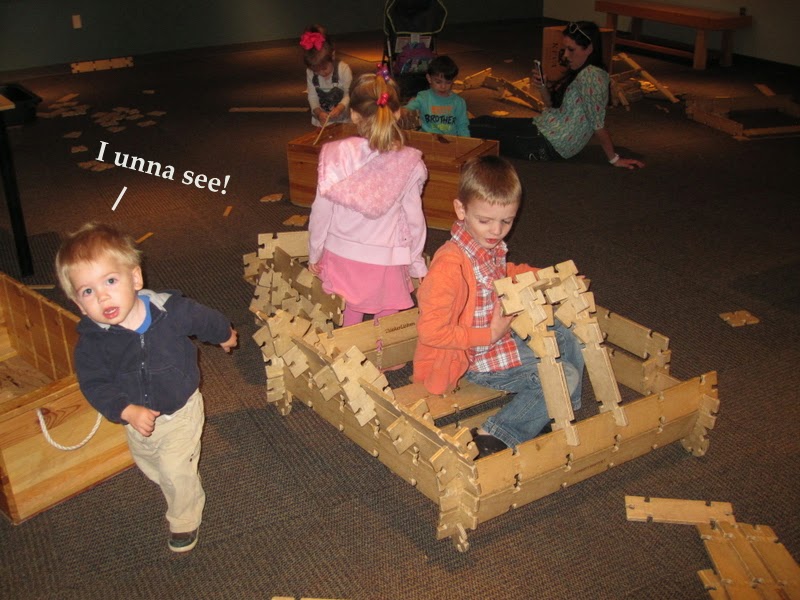 Here's E. taking a turn behind the wheel while Miriam sits in the truck bed. I think this was before it was officially an ice cream truck. 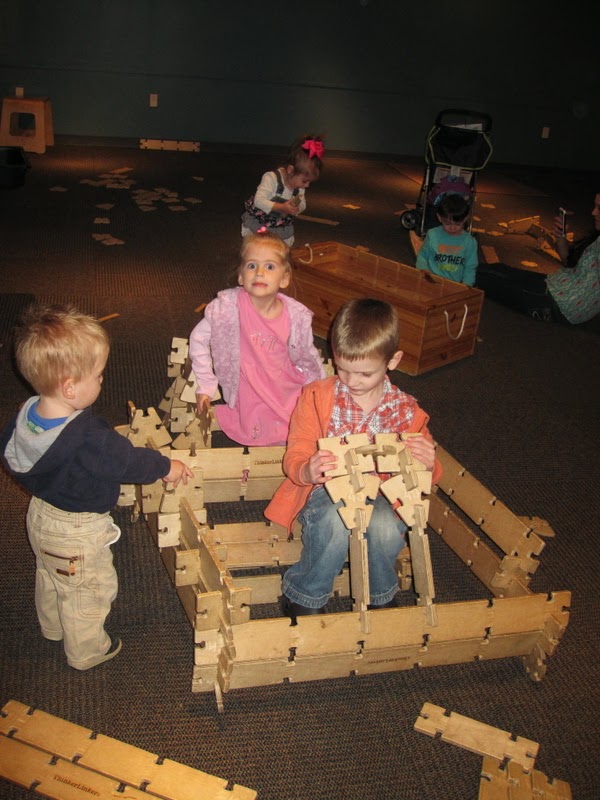 The cab of the truck is taking shape here. And I think it's officially an ice cream truck now—there's a spot for serving ice cream on the other side. K. was really into serving ice cream and had to take everyone's orders multiple times: 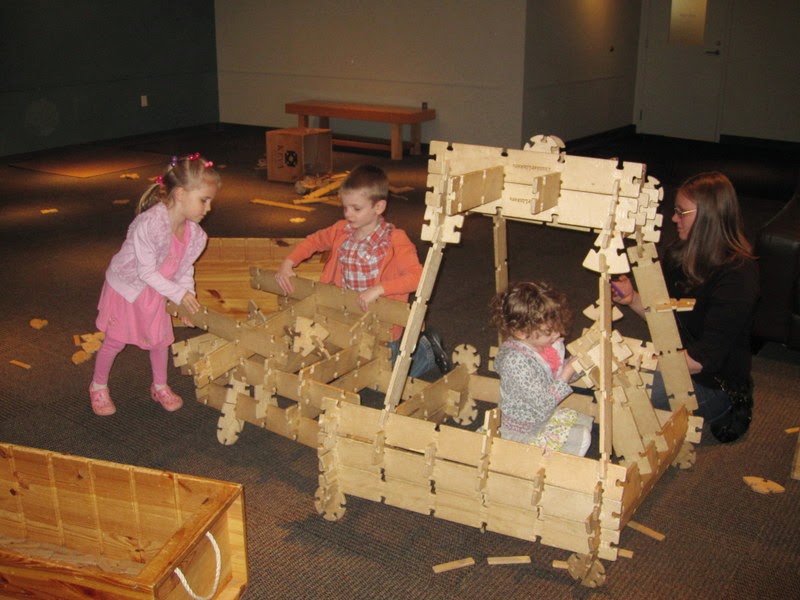 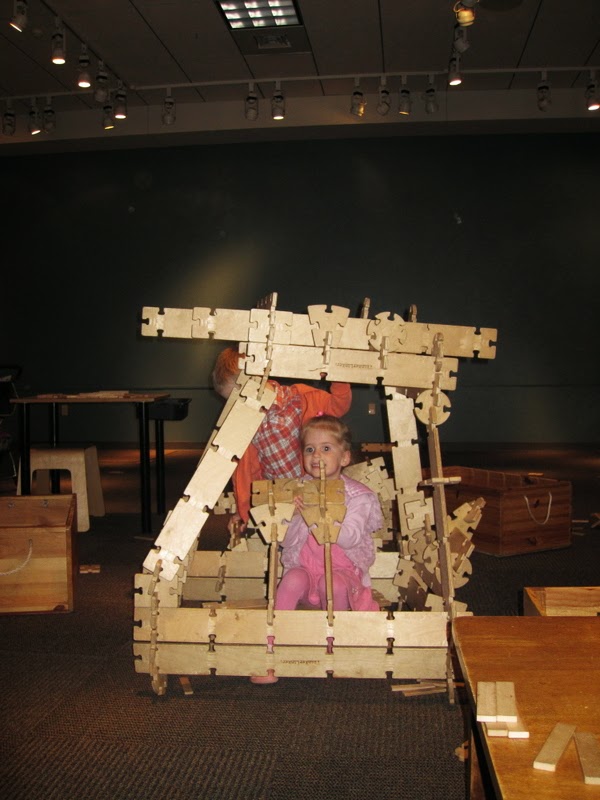 It was too beautiful of a day to stay indoors so we headed outside along with hundreds of other people. The place was absolutely teeming with field-trippers. It was the busiest I have ever seen it but we still managed to have fun. 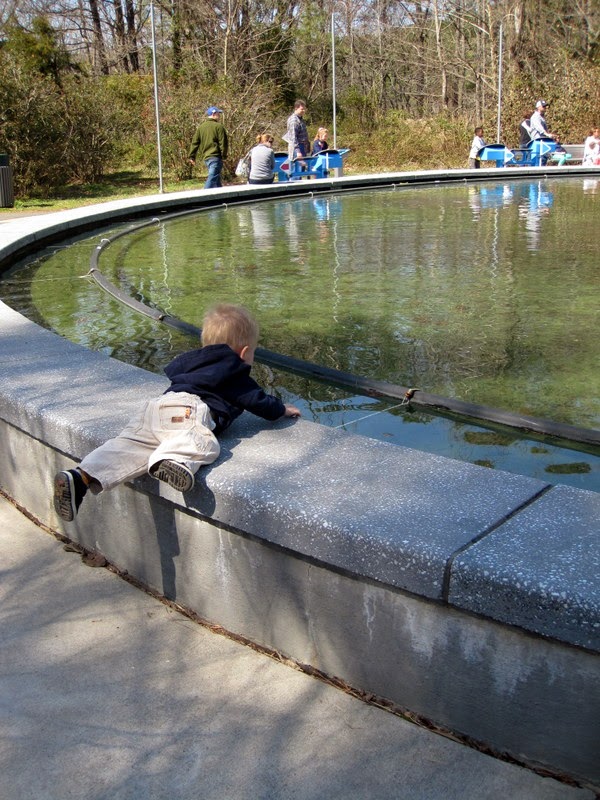 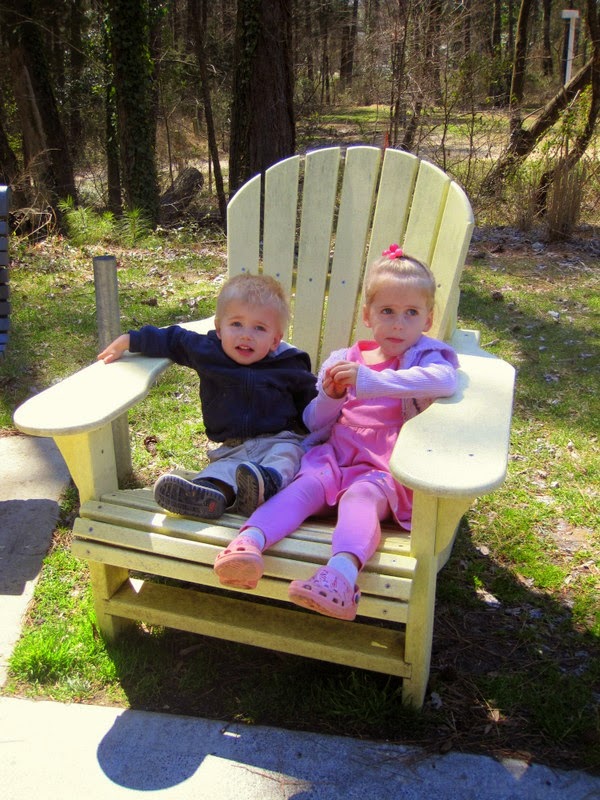 Benjamin found a fruit ball from a sweet-gum/alligator-wood tree. Here he is saying "Ball!" right before throwing it at me: 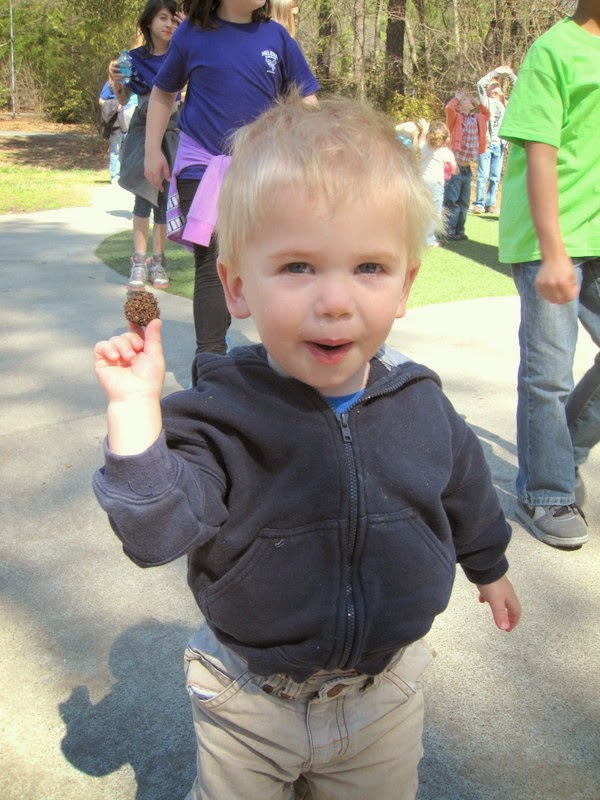 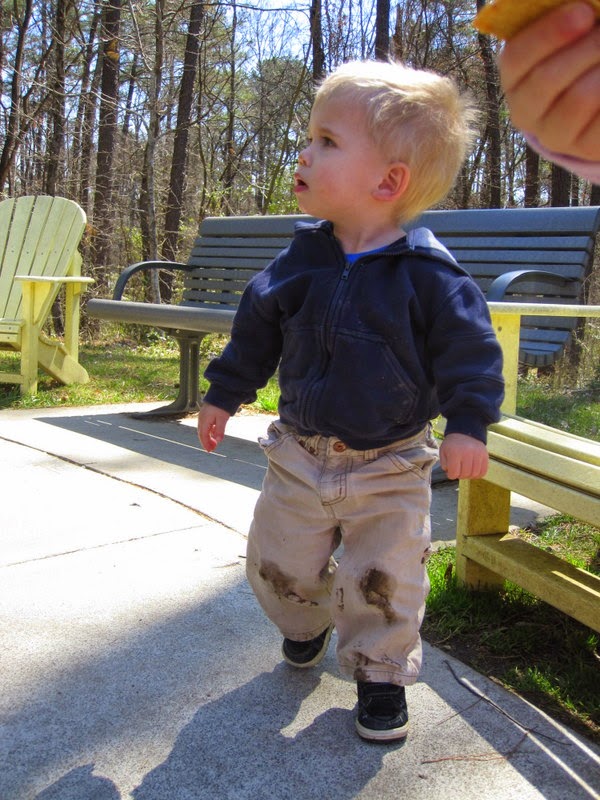 He was so happy to finally make it to the dinosaur exhibit. 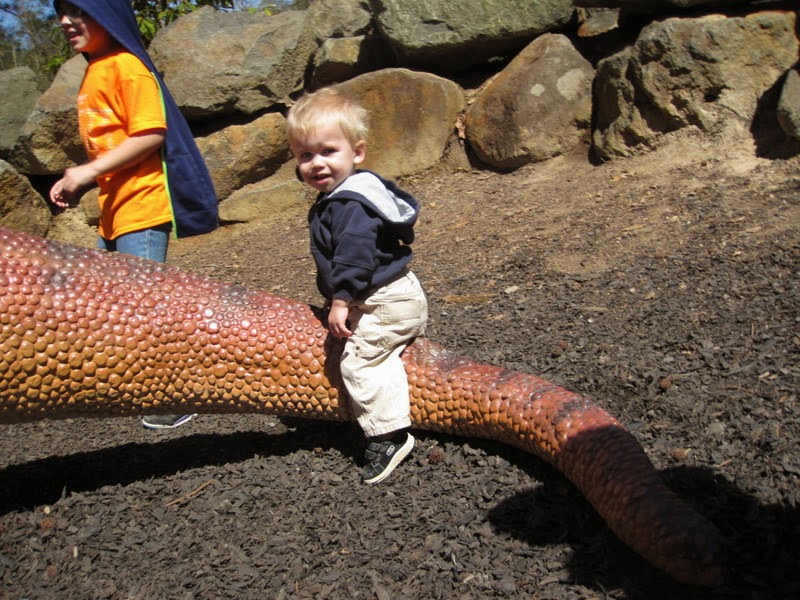 Walking down this trail with him is so much fun because up ahead is a "bad" dinosaur and he can't decide if he loves it or if he's terrified of it. I think he knows it's not real but he can only take a few steps forward before his fight-or-flight response kicks in and he turns around to scream something like, "Bad!" or "Din'!" or just to giggle nervously. 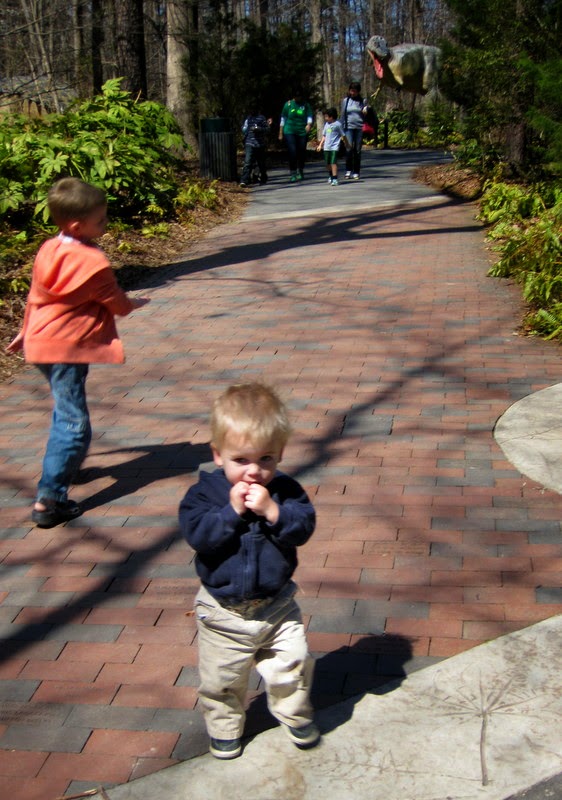 Miriam assured him it was alright because that dinosaur makes her a little nervous as well. 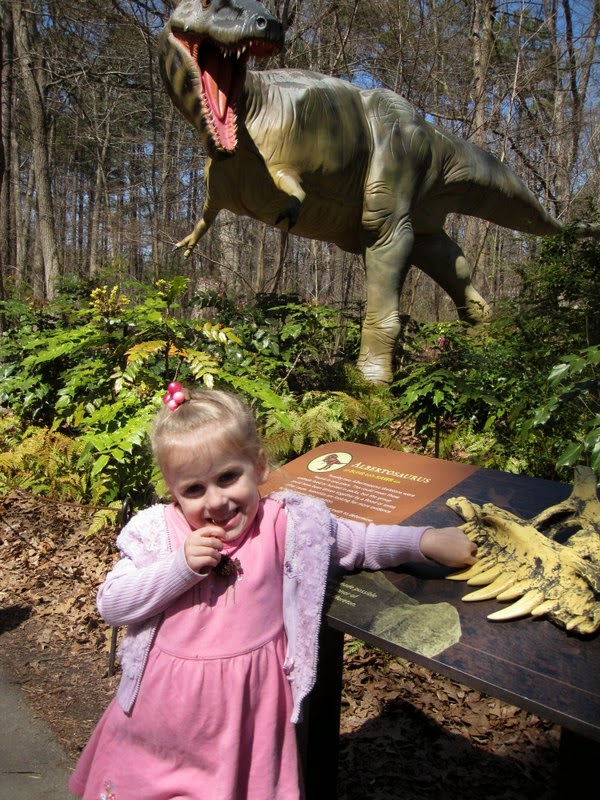 This was one of the times he turned around on the path. He's excited/terrified. 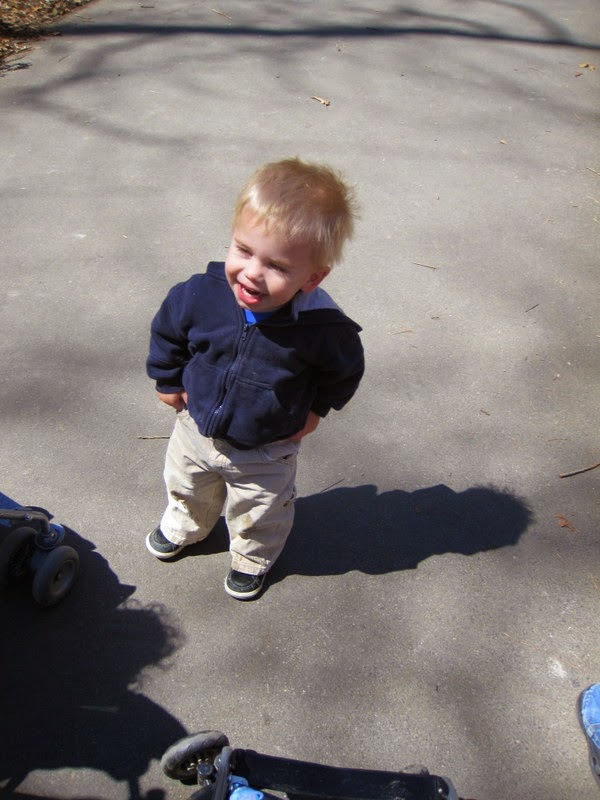 The smaller dinosaurs were more his speed.

Side note: Sometimes it's hard to believe that E. and Miriam are virtually the same age. He's one tall kid! On the other hand, though, Miriam's pretty short for her age. Anyway... 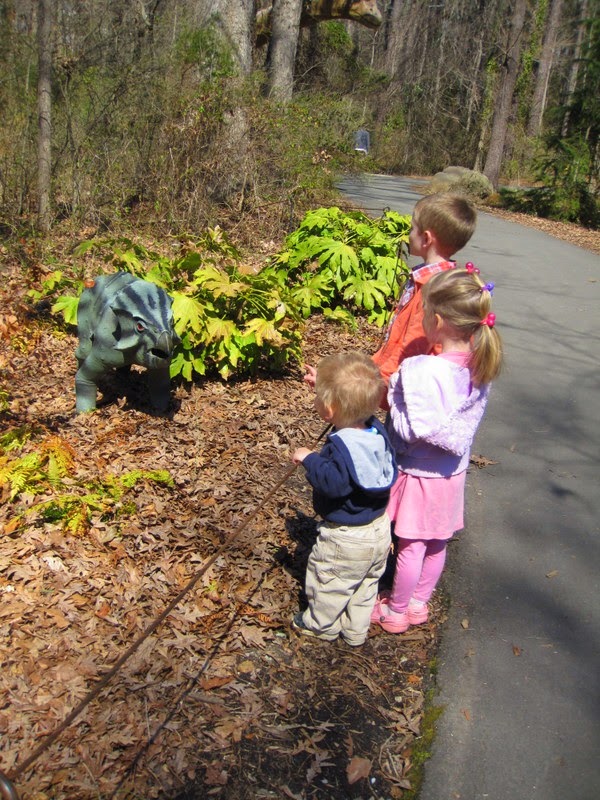 Benjamin was super excited about all the dinosaurs. 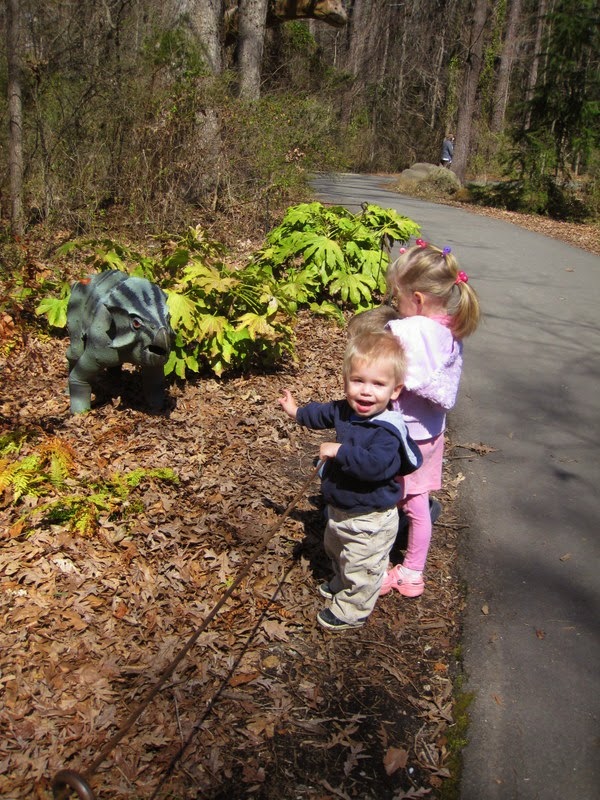 Miriam and E. kept racing up ahead. Benjamin was a little timid about approaching this longneck after seeing E. flattened on the sidewalk: 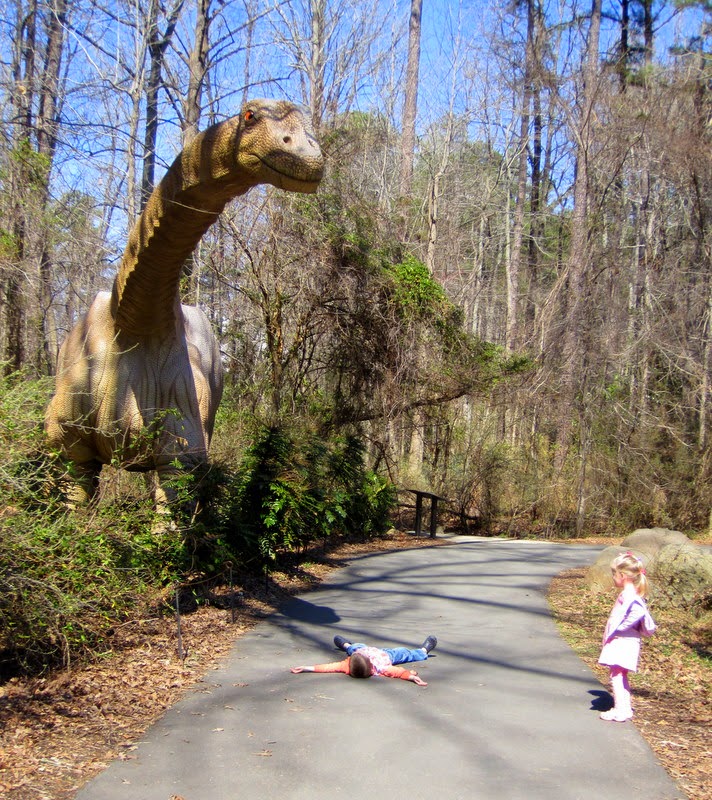 Benjamin was rather interested in this sign about Stygimolochs because it had pictures of birds on it: 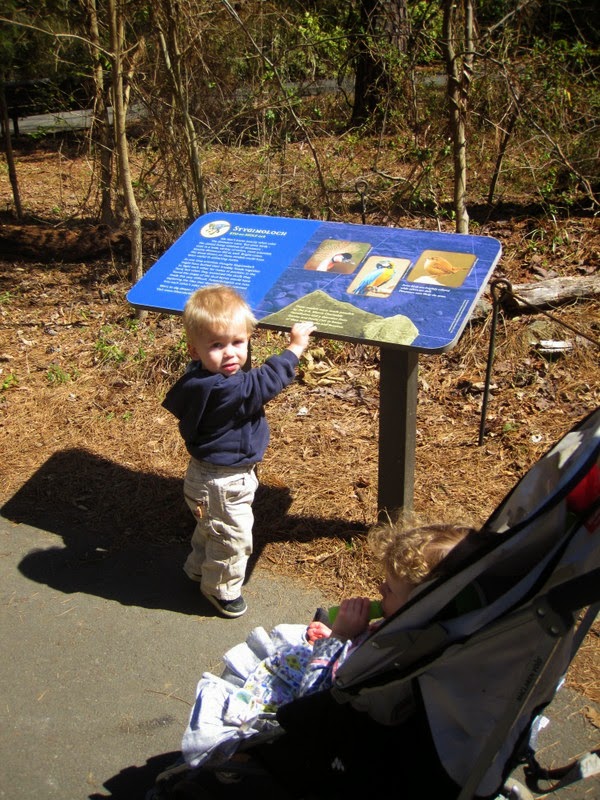 The kids spent quite a bit of time playing paleontologists while Emily and I chatted. 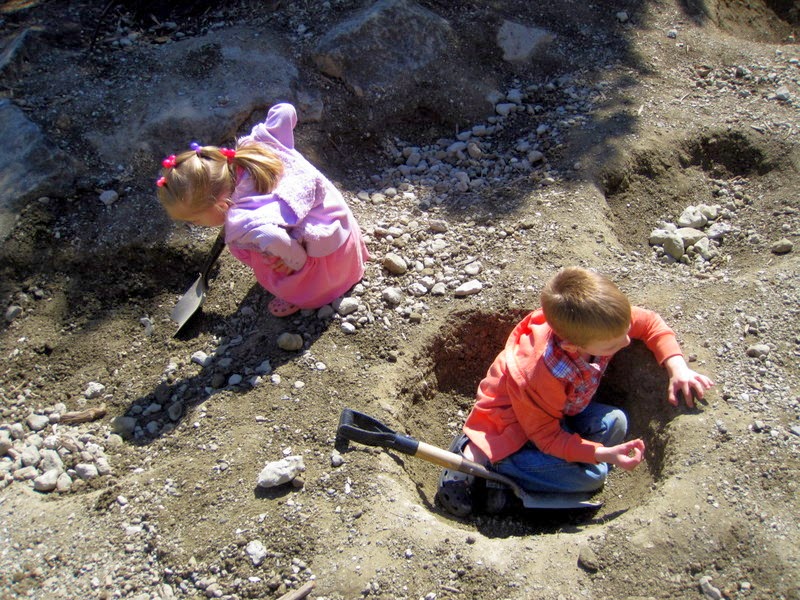 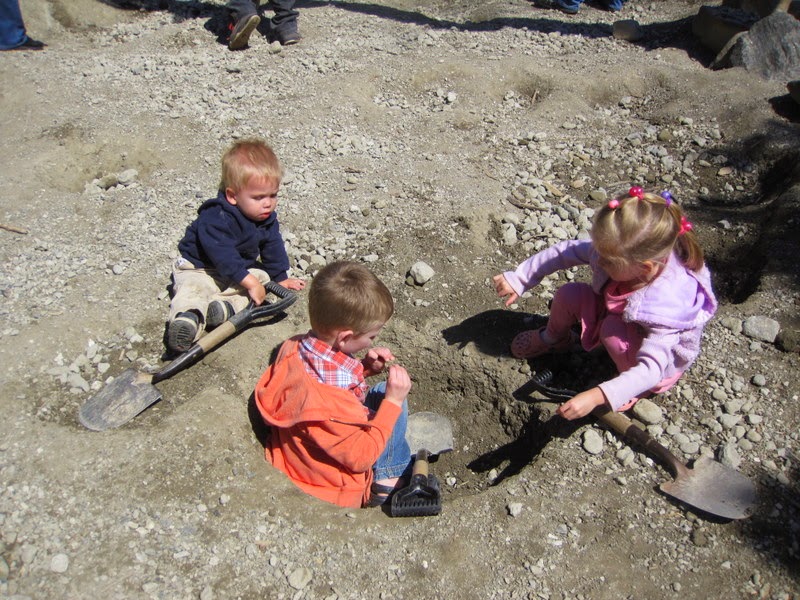 Emily even managed to find a shark tooth, which was an impressive find. Though we've found lots of shells and coral remnants we haven't found much else. Emily told us about the Aurora Fossil Museum, which we might have to check out some day. Apparently their fossil pit is better. 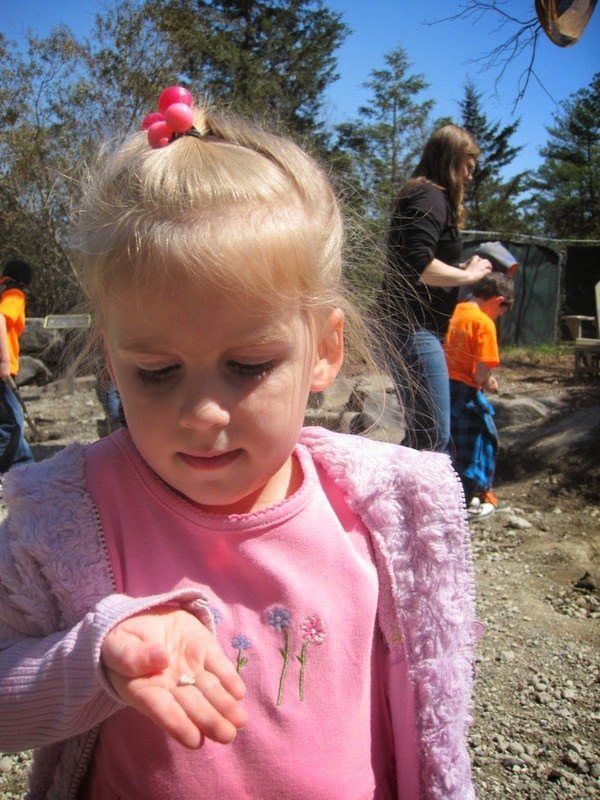 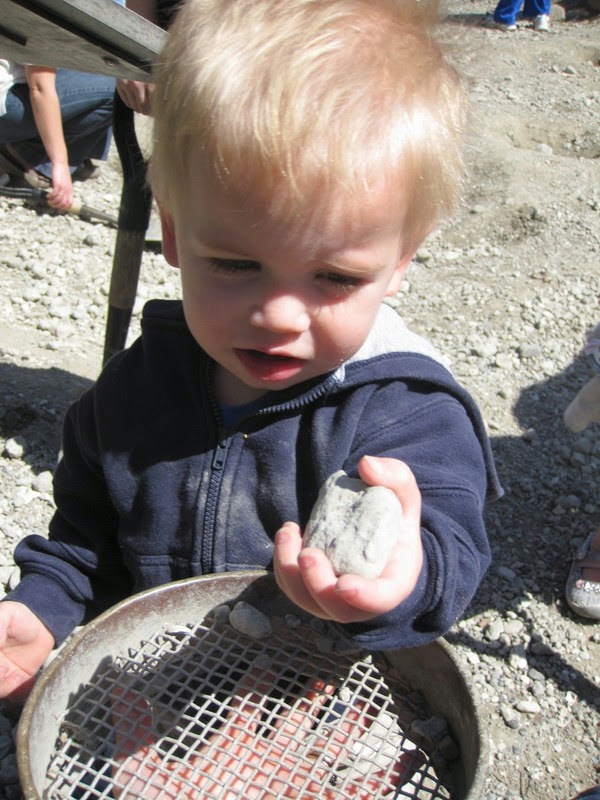 Miriam and E. decided to make a rock collection. They kept loading up rock sifters with fist-sized stones and transporting them to their collection. 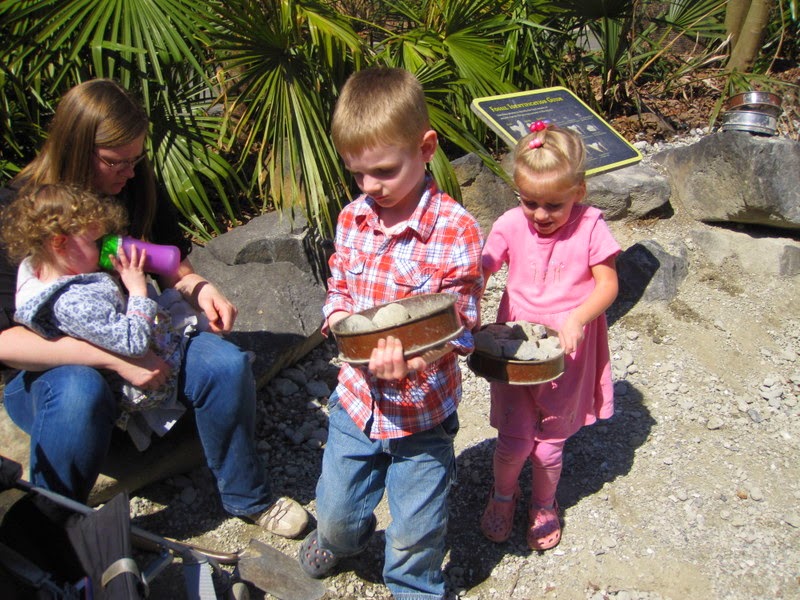 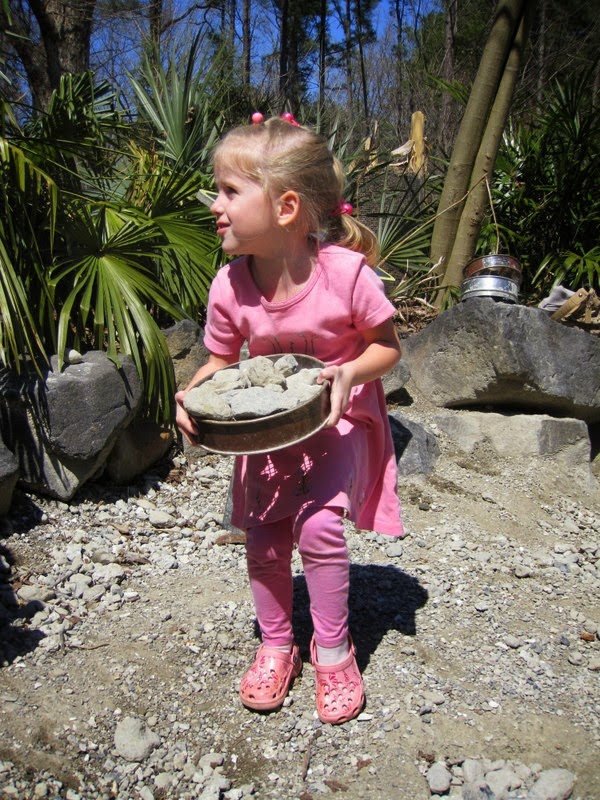 Miriam eventually abandoned the sifter in favour of her skirt. 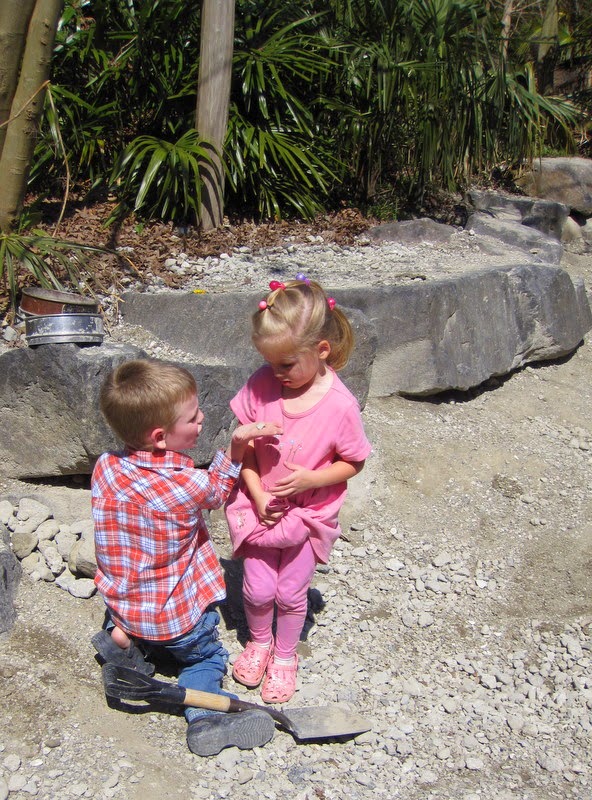 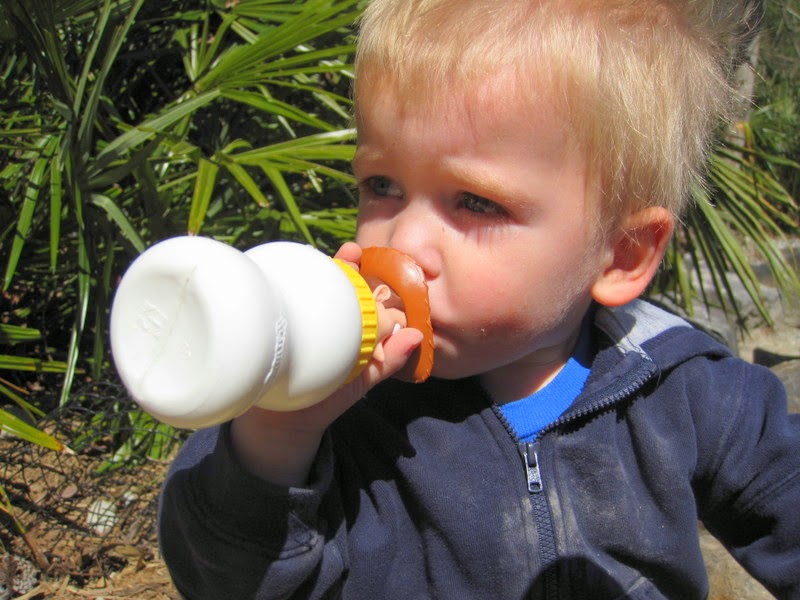 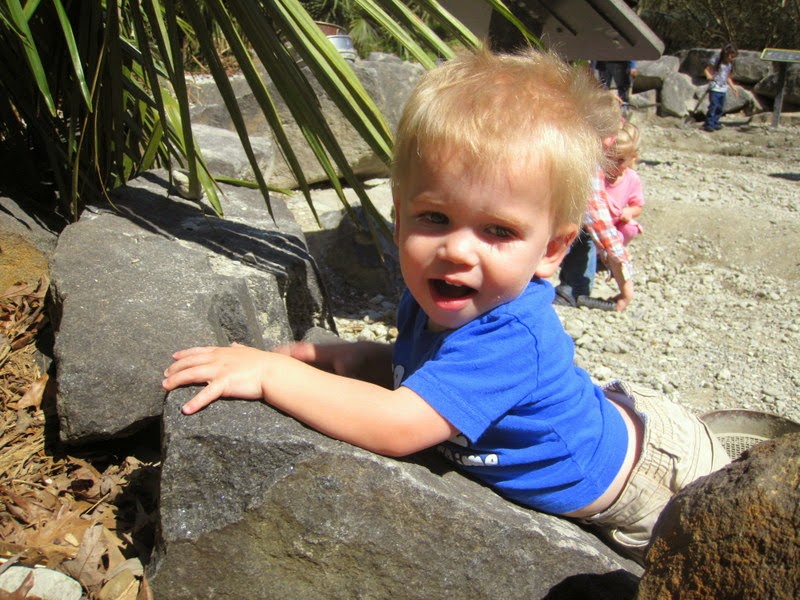 The kids sure developed an appetite with all that digging as well. Emily brought some yummy muffins to share. 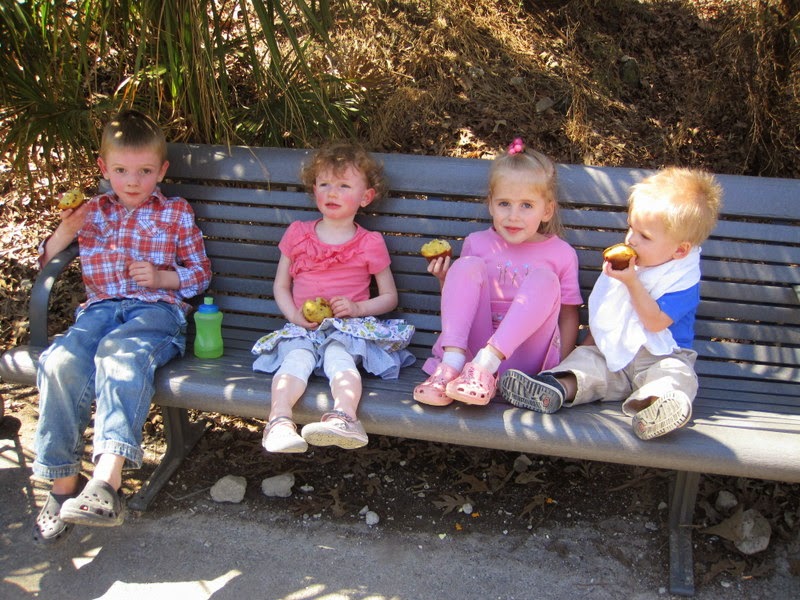 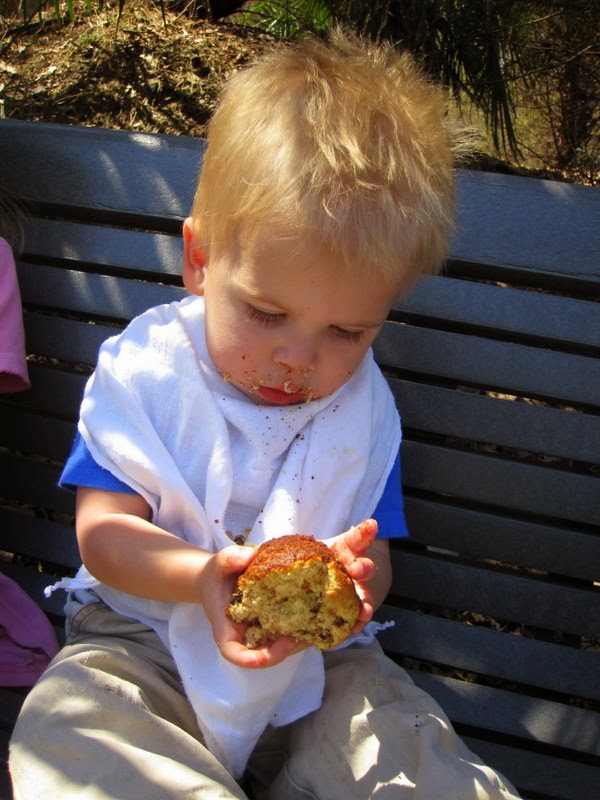 We also enjoyed the farmyard, the sandbox, and the outdoor percussion before calling it quits. Benjamin particularly enjoyed the cow/steer/bovine-thing (I called it the wrong word last time) that was noisily eating its lunch. He alternately smacked his lips and mooed at the cow. The rabbits were also a hit. They had some wheatgrass growing in a little container that they were munching on. 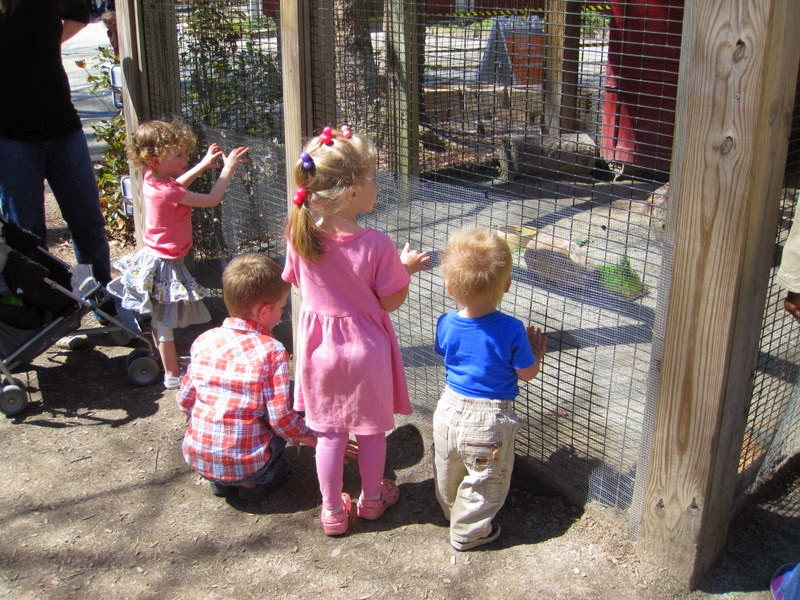 It was a fun (and tiring—even though Benjamin refused to nap!) afternoon with our friends. Thanks for playing with us!
Posted by Nancy at 5:12 PM