In stark contrast to yesterday's ugly ice storm, today was beautiful! Bright blue skies and balmy temperatures—it looks like the weather's back on track. Winter certainly was tedious this year. Although I'm quite certain I can count the measly number of times it snowed on one hand, each snowstorm shut things down so completely that it made winter seem...long. We're left with nothing to do but sit at home and stare out the windows at the angry grey skies. Or play in the snow. But even that gets old after a while.

When we woke up this morning with sunshine streaming through the windows we could tell spring was on its way. The girls asked if we could have a "Spring Party!" so we planned one.

First we played outside. The kids rode bikes while I hung up some laundry and Andrew surveyed the yard for potential projects. Then we loaded the kids into the van for a surprise outing to a new little museum nestled inside an old train/bus depot downtown. It's called the Durham History Museum Hub (or some combination of those terms).

We got sidetracked by the old railroad before hitting the museum (I'm on board with turning it into either a pedestrian path or for increased mass transit as this website suggests): 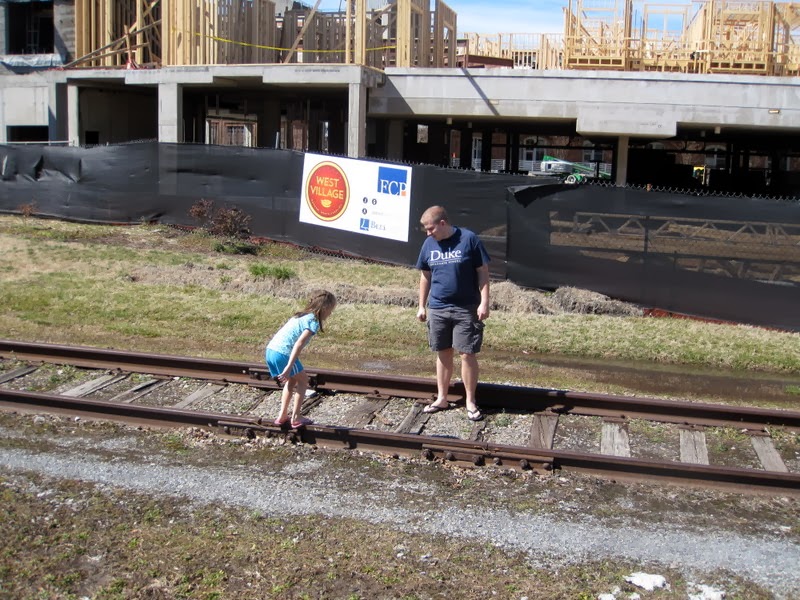 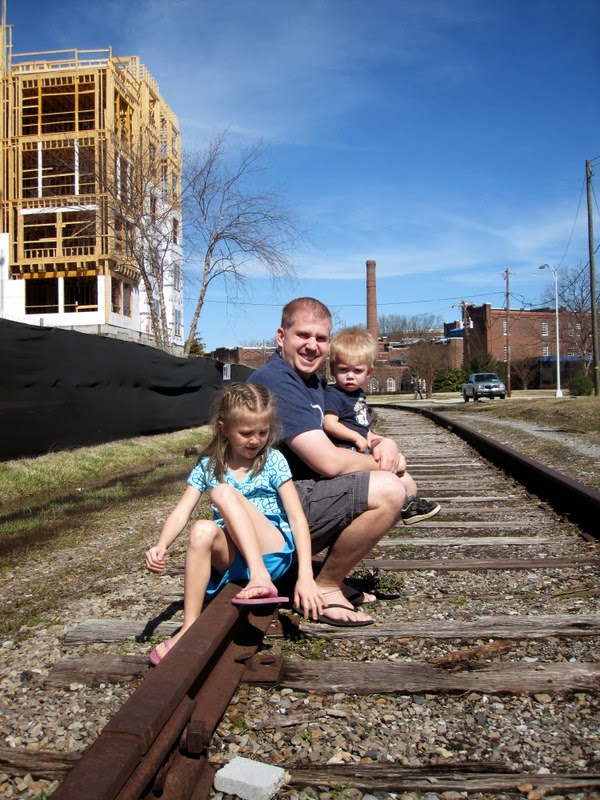 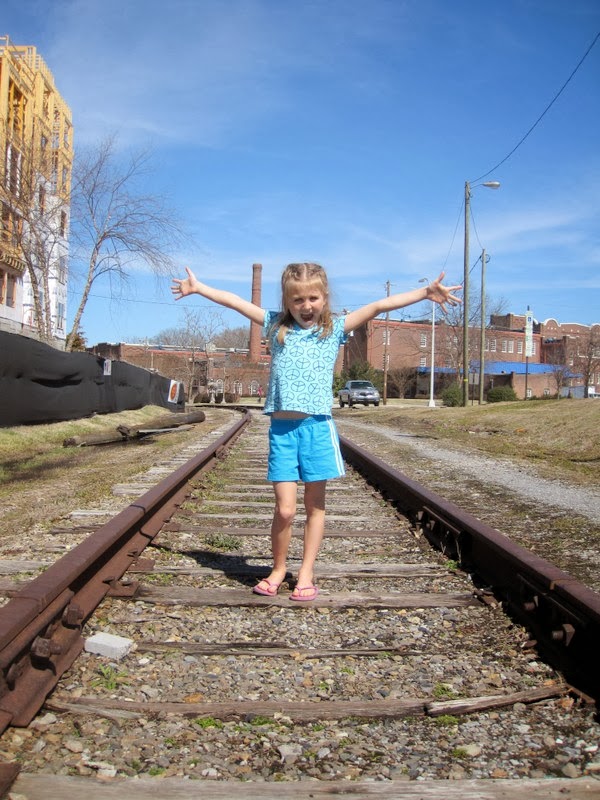 Miriam wasn't sure that playing on train tracks was exactly safe and stood off to the side contemplating what she should do. 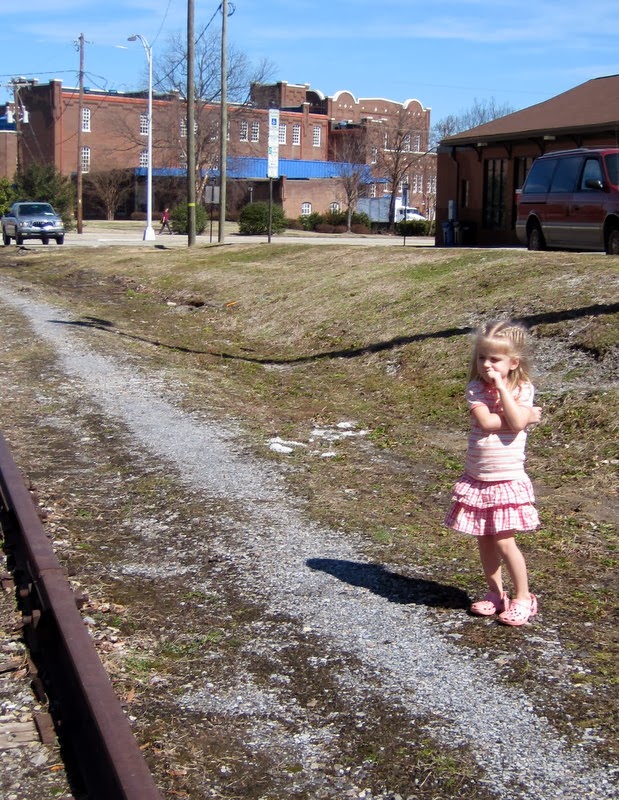 Andrew explained that playing on the train tracks usually isn't the best idea but since a tree was growing in the middle of the tracks he was pretty sure they aren't used very often...if ever (and in fact they're completely inactive). Plus, he assured her, we'd look out for trains. Eventually she joined in. 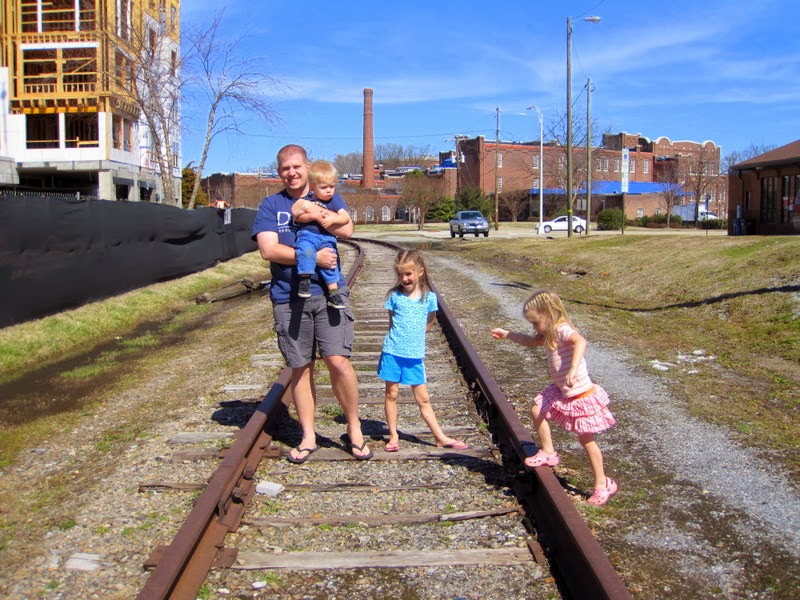 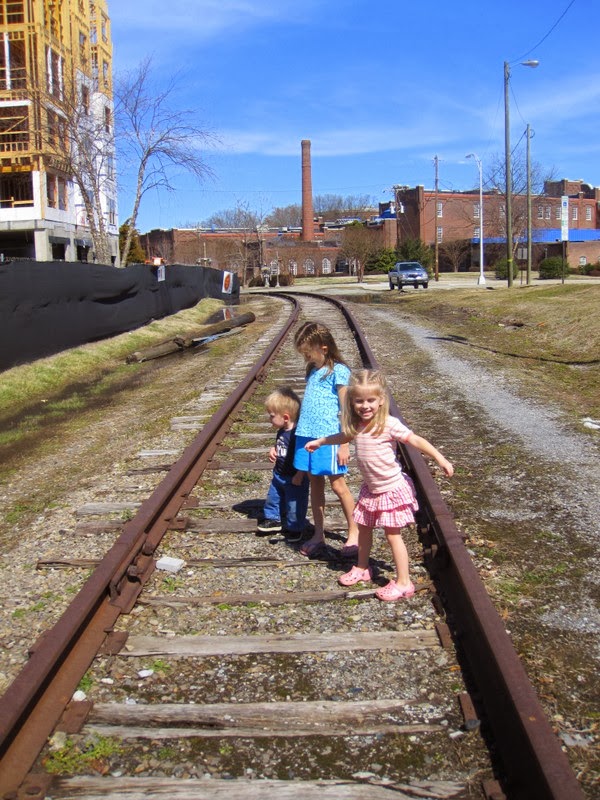 She stood in the tracks for about two seconds before hopping off again. 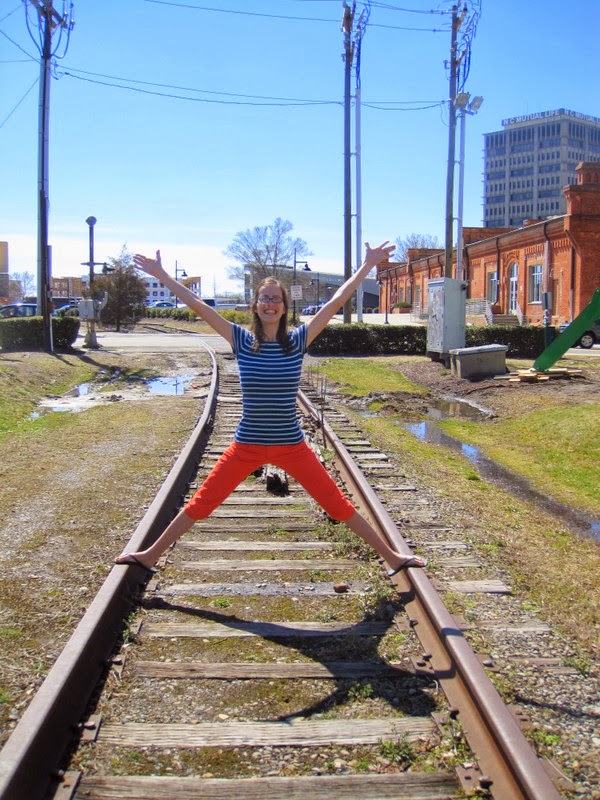 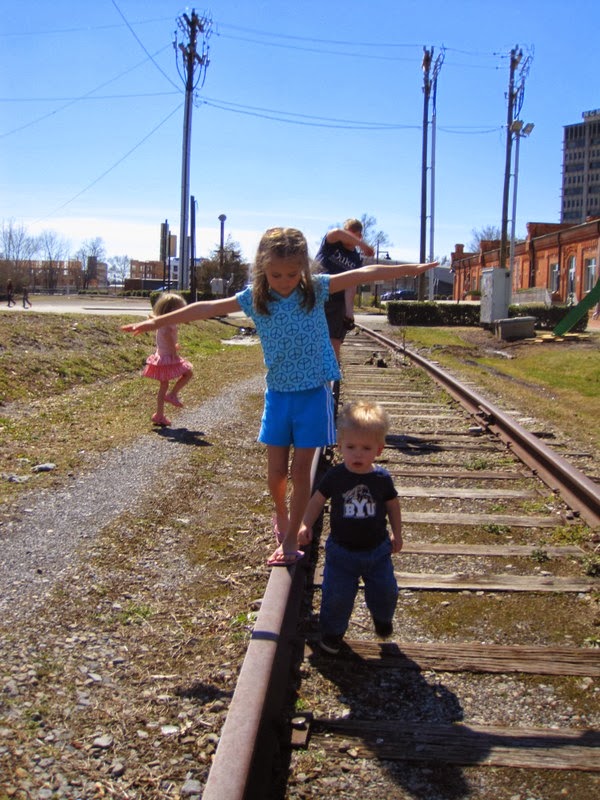 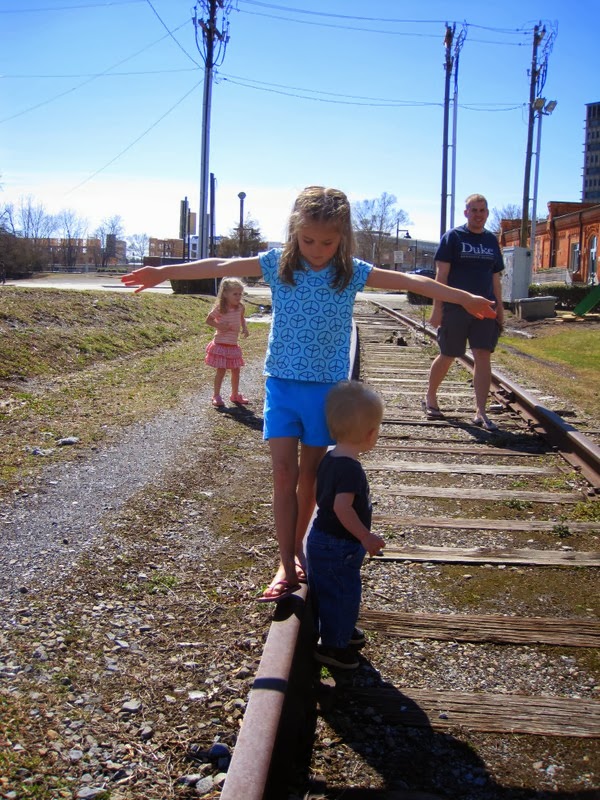 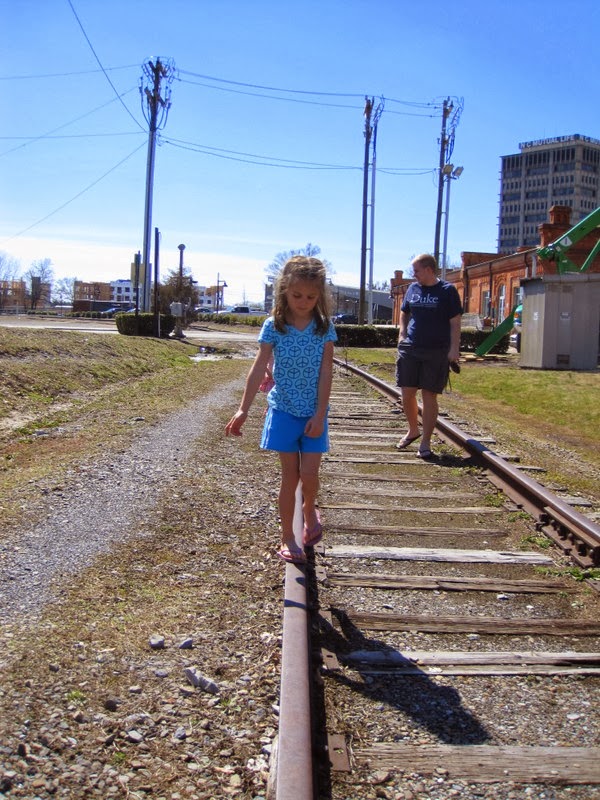 Eventually we went inside the mini-museum and were immediately drawn to the toy trains. The kids spent about an hour putting tracks together and running trains along them. 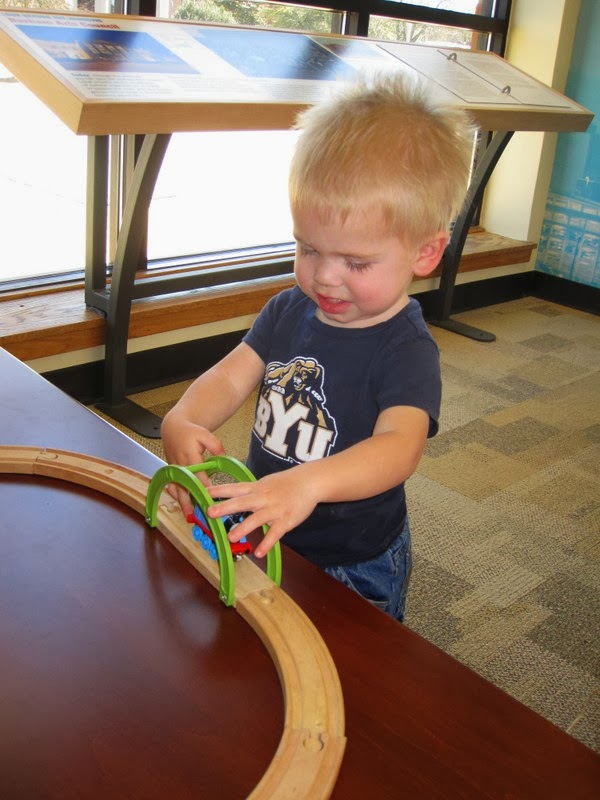 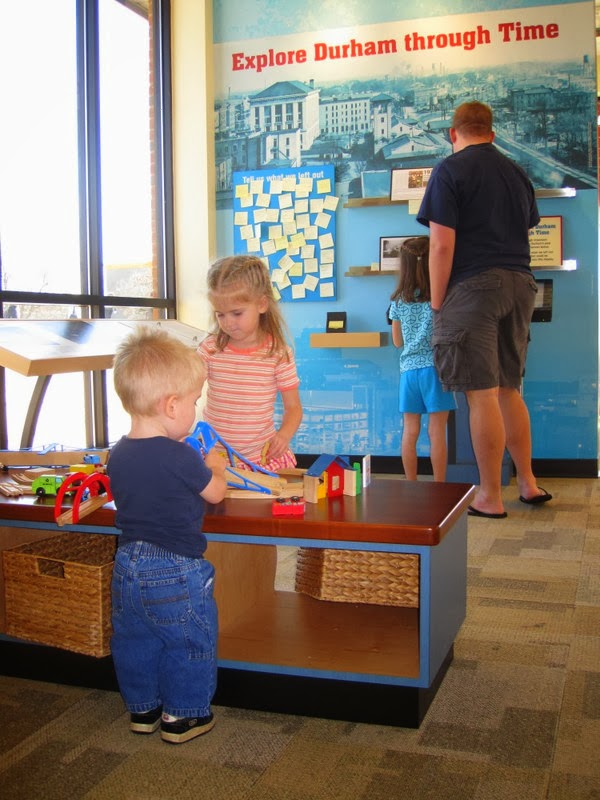 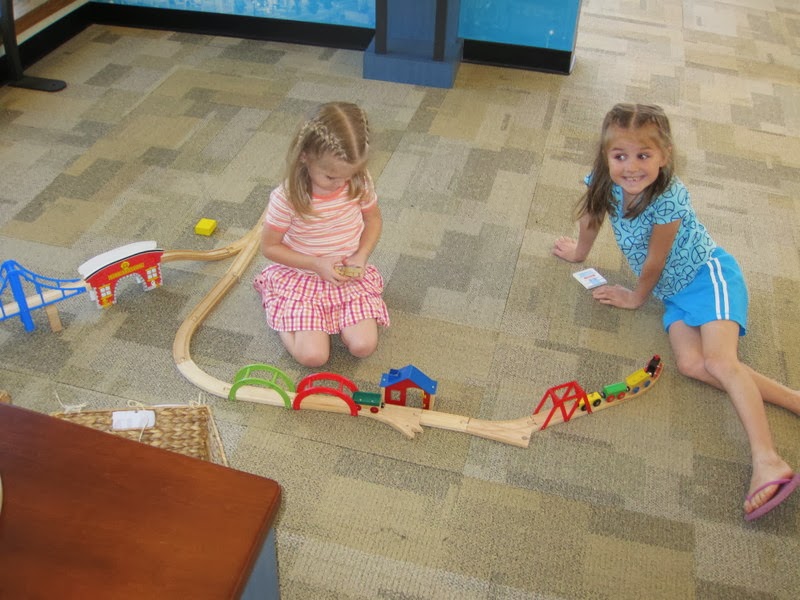 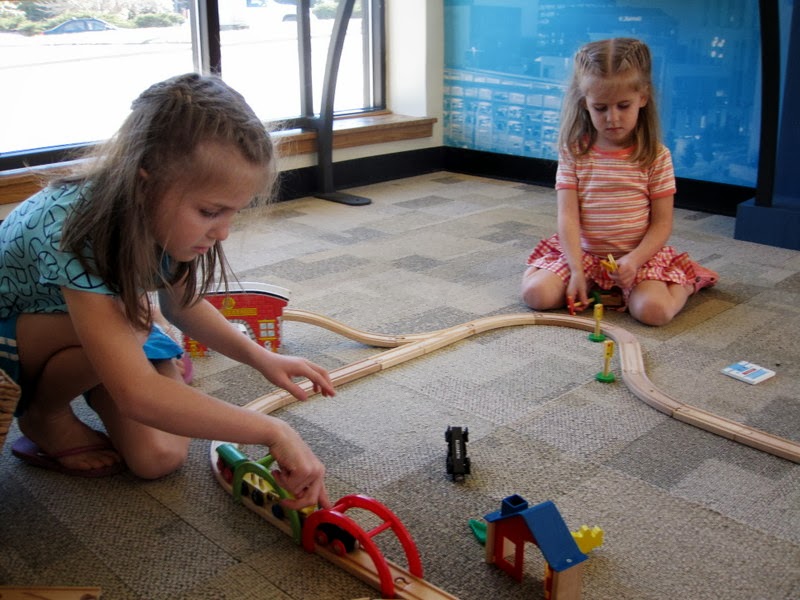 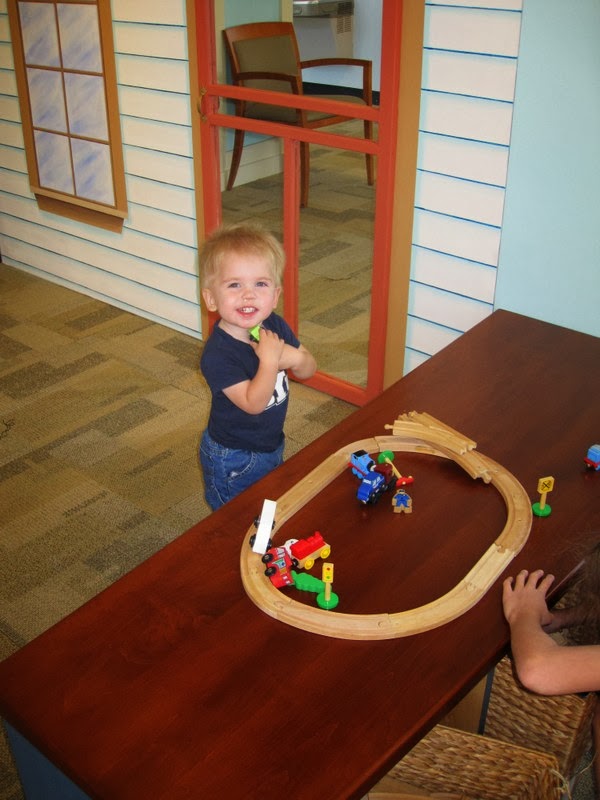 There was also a chest of dress-ups with a poster highlighting a few past citizens (whose clothing (or close replicas) were in the trunk). No one really wanted to dress up today, though we did have some fun with the fake mustaches. 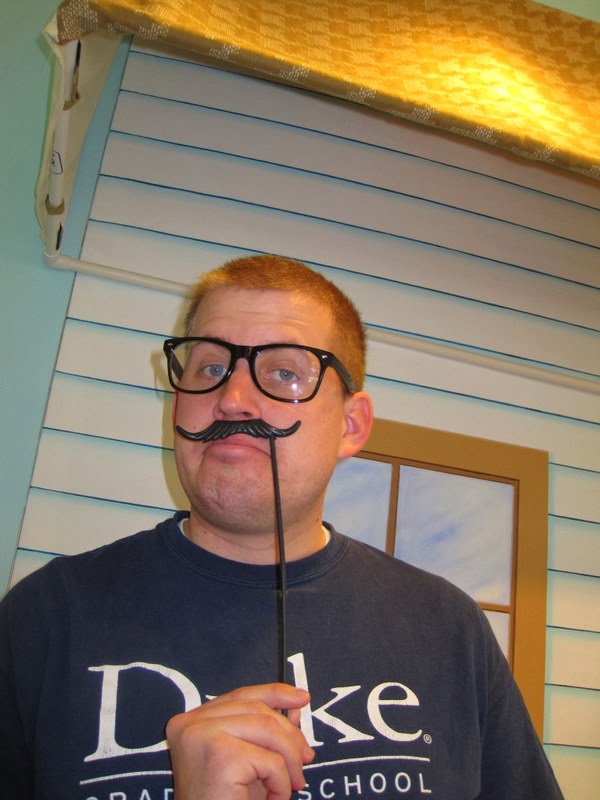 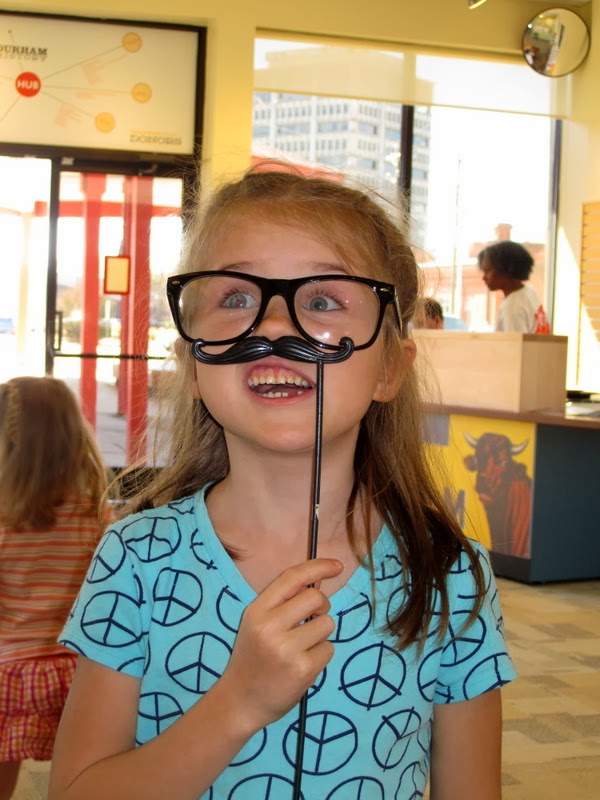 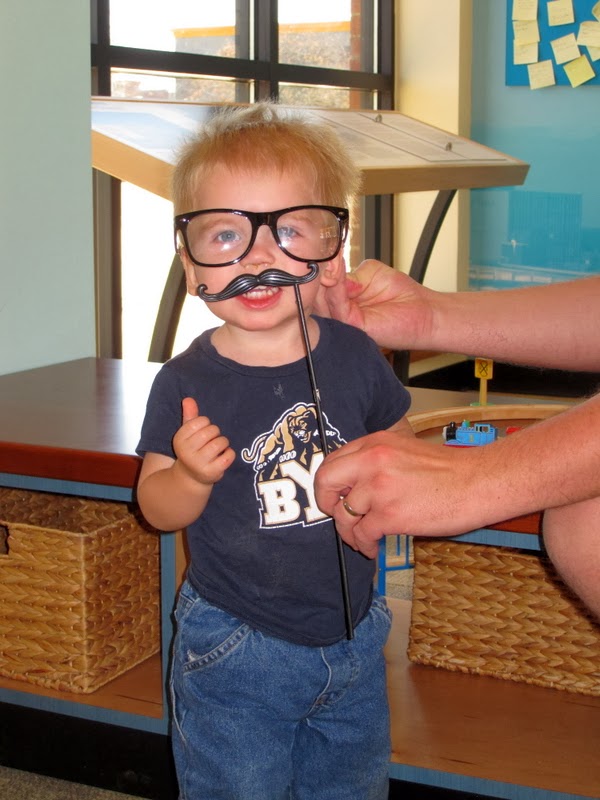 Benjamin tried on some graduation robes—modeling after the first African American woman to earn her JD...from somewhere (I can't remember where). 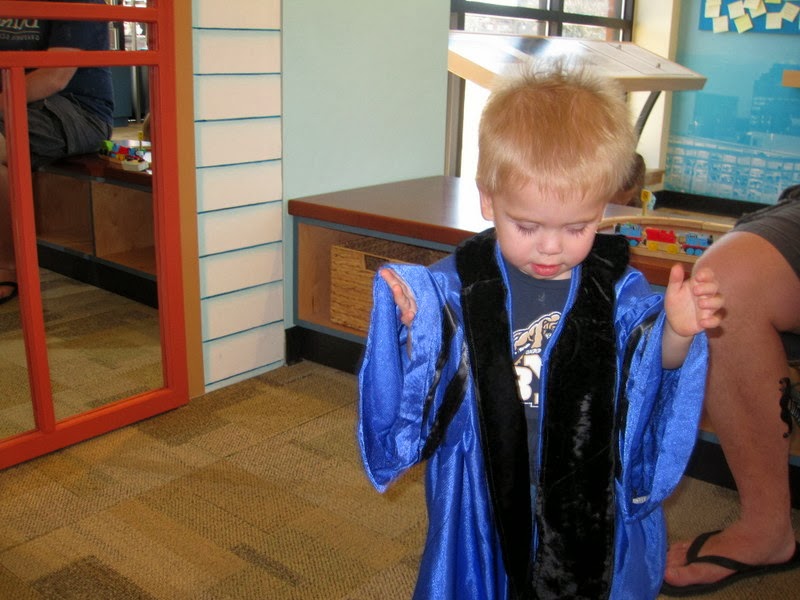 We learned that typhoid fever was called Durham Fever by neighbouring communities (way back in the late 1800s) because it was so rampant in Durham. And now we're "The City of Medicine." Take that, typhoid!

It was a tiny museum but I'm sure we'll be back some day—if only to play with the trains and refresh our Durham City trivia.

Before we left Miriam suggested we play on the train tracks one last time. She'd regretted not doing it when she'd had the chance earlier, I suppose, and wanted to make up for it before we left. 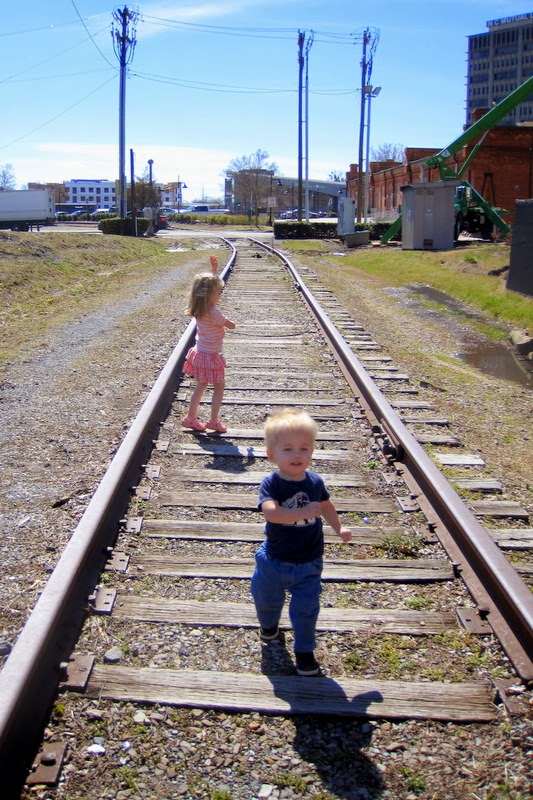 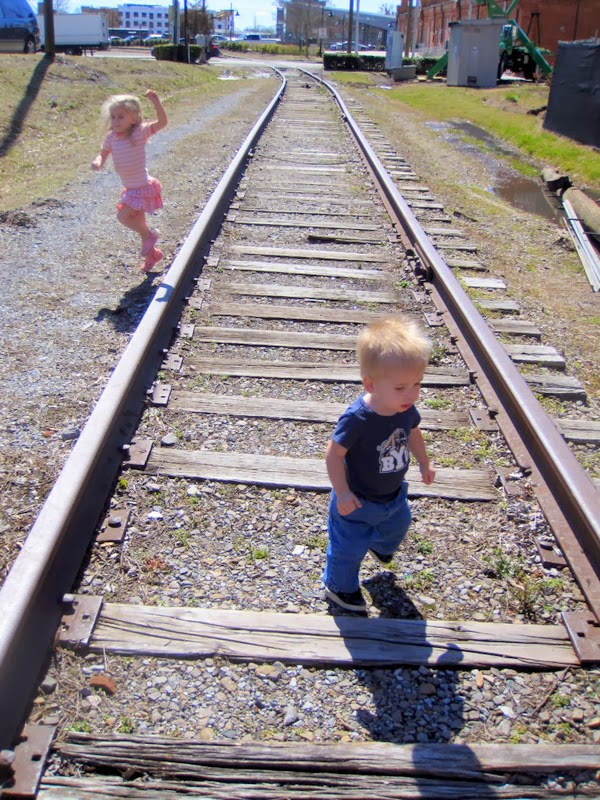 We went shopping for some barbecue goods and then went to Pelican's for a treat (they opened for the season today). There we ran into our friends the Farneses and ended up inviting them to our house for our Spring Party Barbecue. 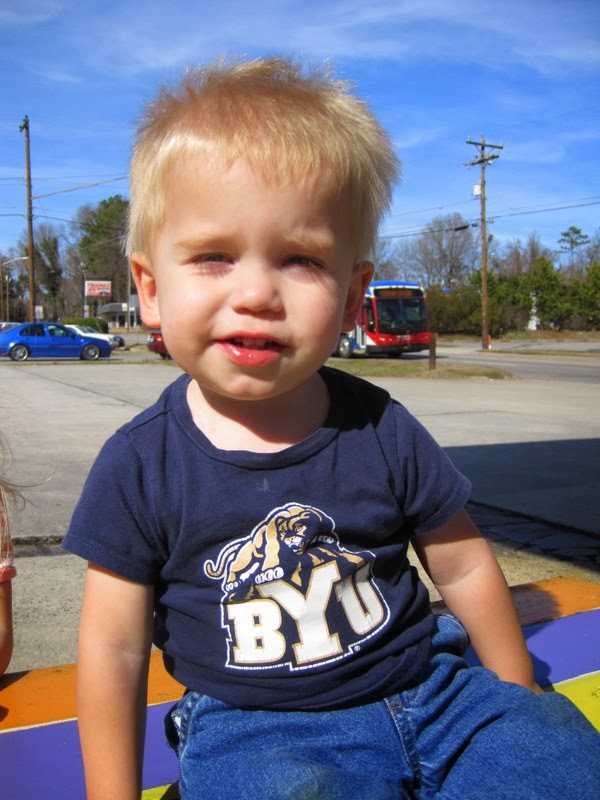 The kids all enjoyed their snow cones. 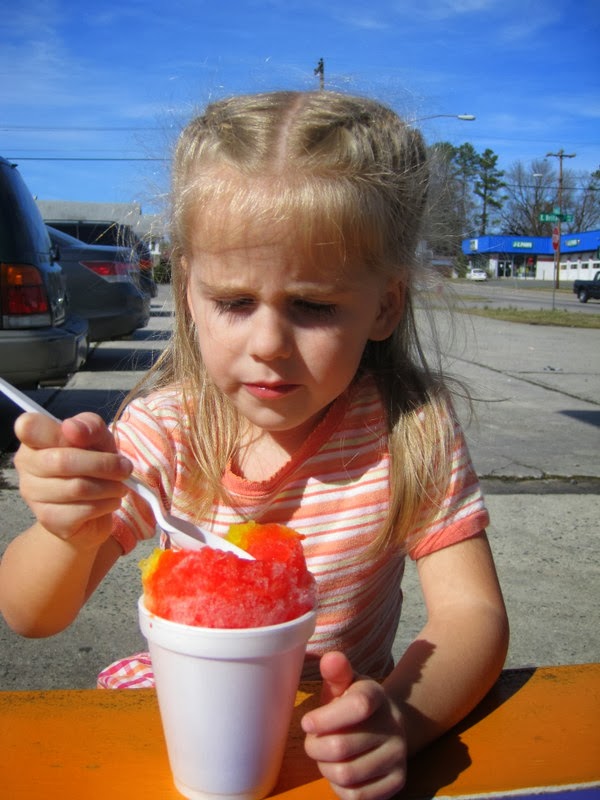 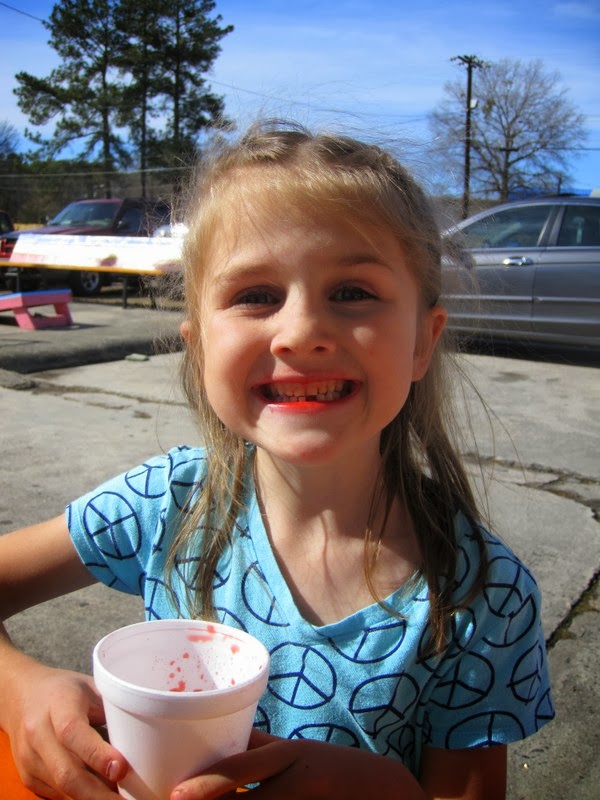 Pelican's spent a lot of time freshening things up for the new season and added some fun things to their establishment. One was "The Ultimate Decider," a wheel you can spin if you can't decide which of the 100 flavours you want, and the other was this fun cutout board. 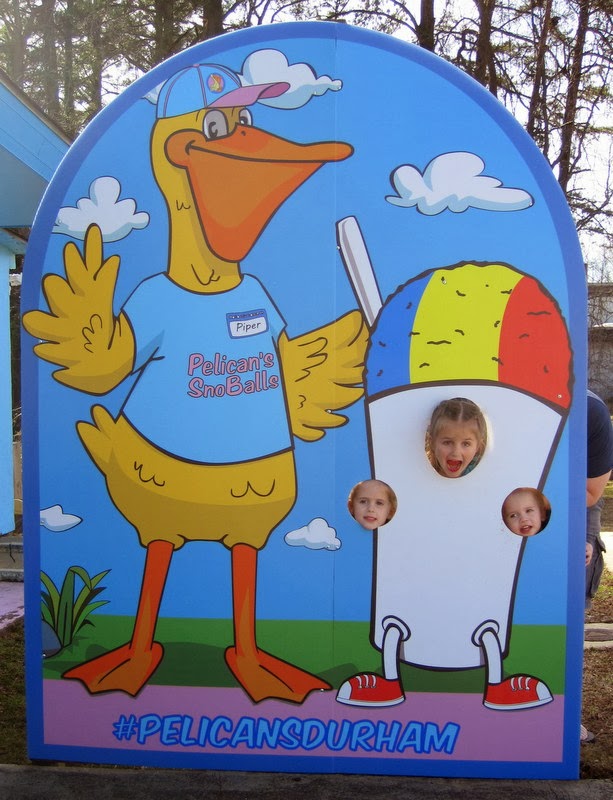 We liked that the pelican was named Piper—that's my niece's name!

Some women were sitting on a bench oohing and ahhing over the children. They told me how adorable they all were and then suggested that I use the picture I snapped as our Christmas card for this year. I really don't think that's going to happen, but I do agree that those are some fine-looking children.

It was fun to have the Farneses over again. Erin is due with their first baby in five weeks and they'll be moving their small family to Birmingham (in the UK, not in Alabama) to pursue a PhD. We're super excited for them, though I've also been craving an adventure so I'm a little envious they'll be heading overseas. I'll just have to live vicariously through their blog, I suppose.

They were asking us questions about moving overseas and mentioned that in all the apartments they've looked at online there's been a strange dishwasher in the kitchen. It's rather tiny and has a round window like you'd expect in a front-loading washing machine, they explained.

"Oh, that's not the dishwasher," we told them. "That's the washing machine."

"In the kitchen?!" they wondered aloud. "But we haven't found a dryer in any apartment."

"Yeah, those are rather rare."

"But it rains all the time!"

We told them about the style of rack they'd likely find over there.

"The best part is that the washing machine takes like five hours to run a single load and the load it runs will be at least half the size a washer here will handle," I said.

I assured her that it's possible to cloth diaper with a small machine and no dryer. I did it in Cairo (though we did get a few more sunny days in Cairo than they're likely to get in Birmingham).

Anyway, it was fun to have them over and we're so excited for them to go, but also a little sad. In the middle of our after-dinner conversation Miriam came up and whispered in my ear, "Are the Farneses leaving for the UK today?"

The Farneses are some of the girls' favourite babysitters. We'll be sad to see them go!
Posted by Nancy at 9:44 PM