Last night was Rachel's first soccer practice of the season—and her life. She was so nervous and excited for it.

Ballet always seemed to be a thing she did so that Miriam could do it and it was an expensive activity for her to not have her heart in it. Miriam loved it (and I kind of want to sign her up again except that it's so darn hard to swallow the cost) but Rachel simply never did.

Then she asked us if she could play soccer instead. I looked around and found a league that plays for three months (one practice a week plus sporadic games on Saturdays) and costs $75. They even supply a uniform (though we still have to find shin pads and perhaps some cleats (though I'm leaning toward just getting a nice new pair of runners because that's an option (a much more practical option))). Of course, the coaches are volunteer coaches, but I don't think that's a terrible thing.

Andrew and I were both shocked at how inexpensive it was—like manna from heaven after forking out wads of cash for a semester of ballet classes.

Rachel was so cute running around on the field. She kept stealing the ball from her own teammates and heading off into the middle of nowhere with the ball, but she'll get the hang of what she's supposed to do.

It was only her first time playing but she's already dreaming of making the olympic team one of these days. A small city league with a volunteer coach is a good place as any to embark on fulfilling that dream, I think. And if the dream changes along the way I won't be too heartbroken. I'm more in it for the fun (and the ensuing exhaustion running around for an hour causes my little non-sleeper).

While I sat on the bleachers and read A Short Stay in Hell Andrew took Miriam and Benjamin to the nearby playground where they had so much fun they can hardly wait for next Monday.

It made our FHE schedule a little harried but I think we'll manage for the next few months.


The coach works in the city planning office (or something like that (I didn't really talk to him; Andrew did)) and mentioned that they're improving a trail in our neighbourhood and that he thought it would eventually connect to the soccer fields that are across the river from us. He mentioned a bridge being put in...

We didn't even know there was a trail in our neighbourhood. Apparently it's part of the Mountains-To-Sea Trail (MTS). For our evening walk—and as a North Carolina adventure—we decided to find this trail in our very own neighbourhood that we didn't even know about. I don't feel too bad about not knowing about it even after we've lived here for so long (this is about as long as we've lived anywhere) because I mentioned it to four different neighbours today and nary a one of them had any idea what I was talking about (but asked for details should we happen to find it).

And find it we did!

It wasn't too hard. We first found the river on Google Maps and then followed the trail beside it until it popped out in our neighbourhood. We walked to that point and lo, and behold, there was a trailhead just sitting there all stealth-like. 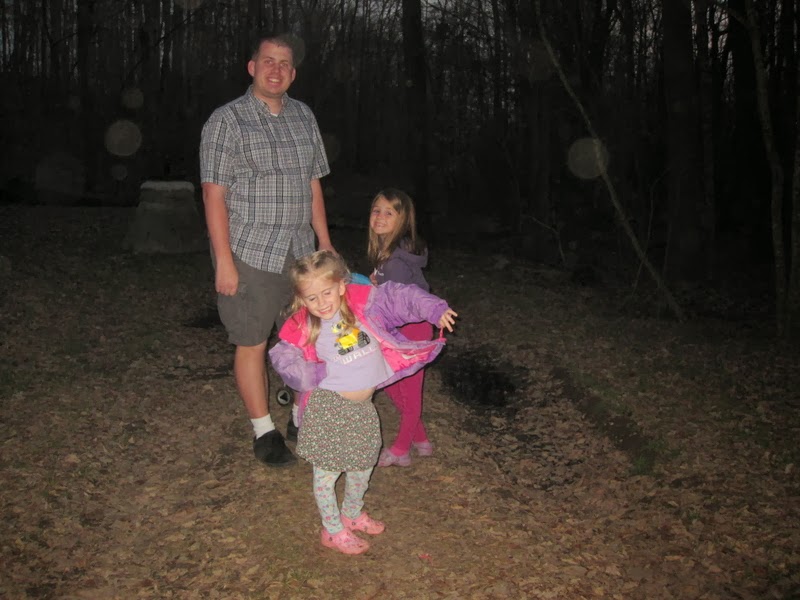 The sun was beginning to set and we wavered for a second because we just didn't know—should we stay? Should we go? (I love that book). Eventually we decided we'd go ahead and take the trail. It was a boggy, soggy, swampy mess but evidently a pretty popular place to walk. We found deer tracks, dog tracks, raccoon tracks, and people tracks (just to name a few). 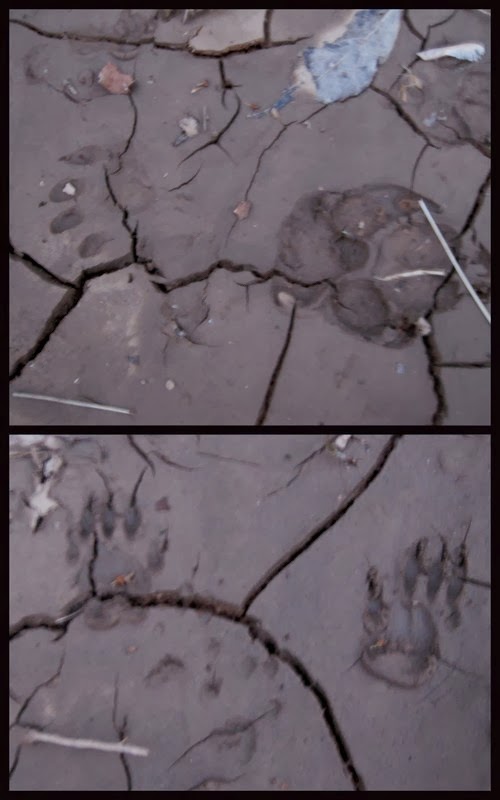 It's also a very popular abode for frogs. The forest was filled with their croaking.

We found that bridge we were told about—a bridge so new that the inspector's kit was still posted nearby (evidently the bridge is still pending its final inspection but it seems plenty sturdy to us). 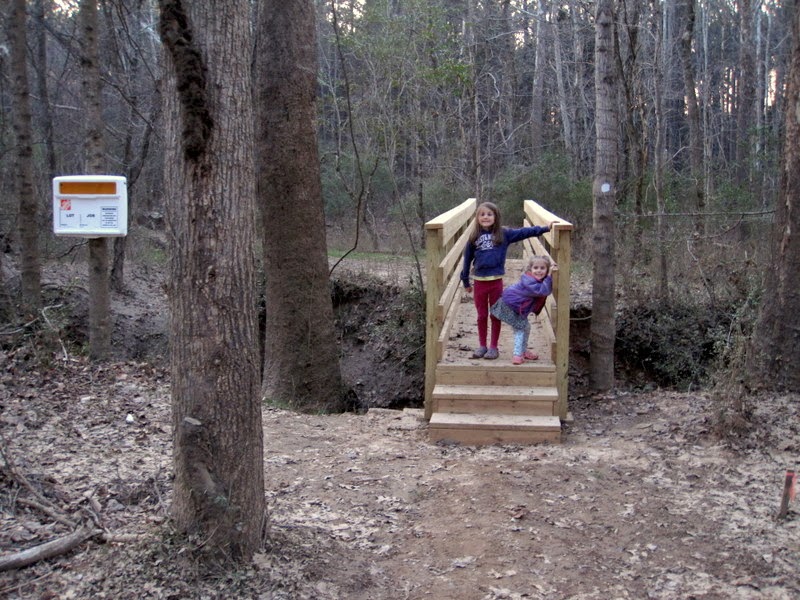 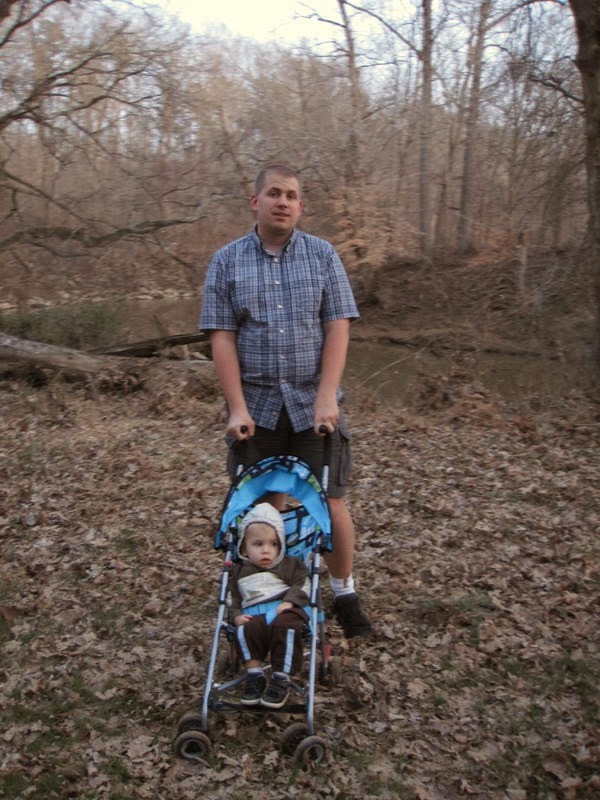 It was getting dark rather quickly as we made our way back so we took a shortcut up a hill and through the yard of one of our neighbours. They weren't home. I hope they don't mind.

The girls were excited to see the bats come out. They've been obsessed with bats and twilight for years. When we were walking around the same time a couple of nights ago, Miriam suddenly announced, "Well, I guess it's twilight now."

"What makes you say that?" I asked.

Seriously—they've been all about bats and twilight since sometime in Utah. I can't even remember what originally spurred it on.

The thing about twilight is that it leads to bedtime. The kids obediently changed into their pyjamas as soon as we got in the house. Benjamin's wearing some cute new pyjamas so we took some pictures. I can't remember who gave these to me—it was at my baby shower—I'll have to look it up. He was so excited to be covered in dinosaurs. 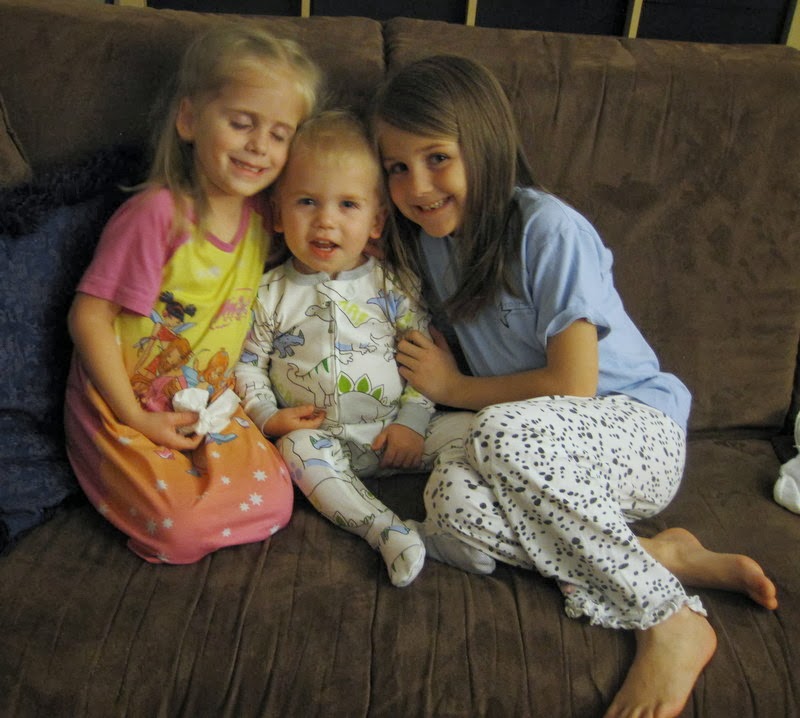 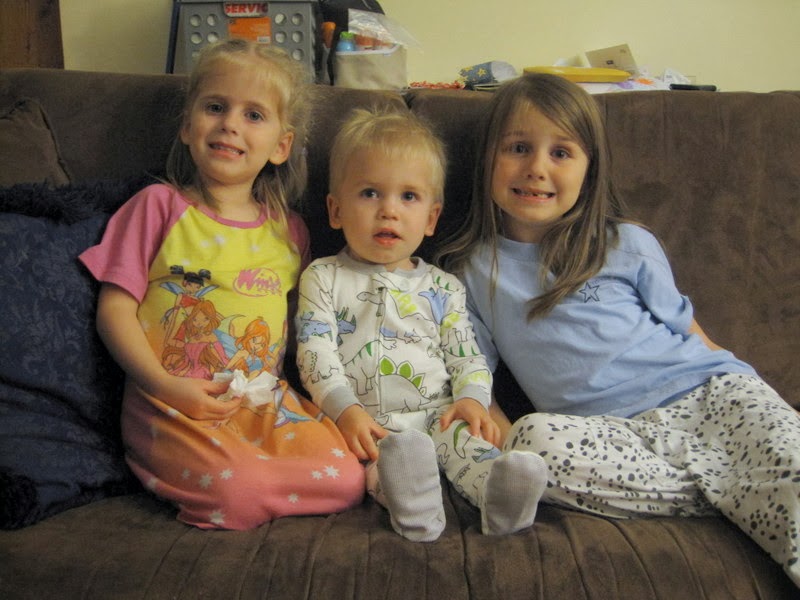 And here he is telling me about his knee: 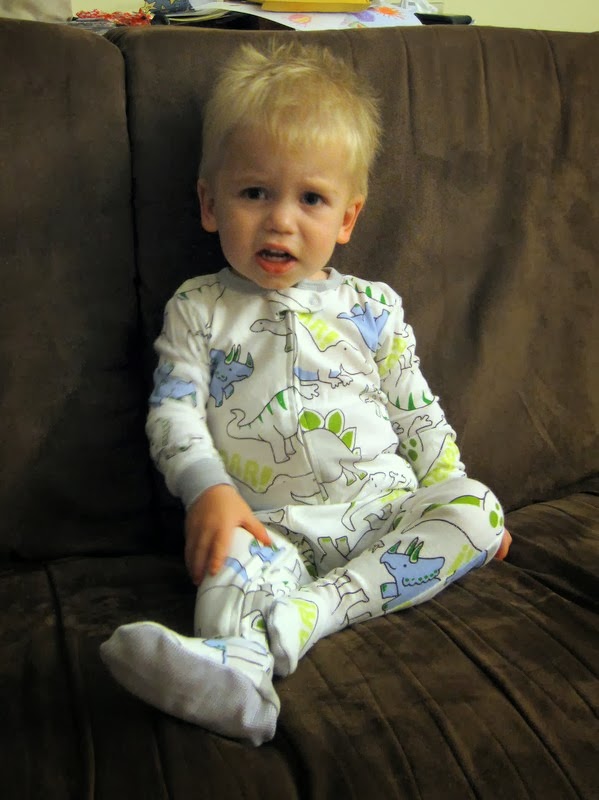 Our high today was 26°C/78°F so Benjamin was rocking a pair of plaid shorts when he tripped on the driveway, scraping his knee up quite nicely. He was upset that I put a new bandaid on it (but he'd peeled off the old one and his owie was oozing and I didn't want his scab to meld his knee with his pyjamas).

He's in bed now. He's been going to bed like an angel lately—and even sleeping through the night most nights—as long as we don't mention the word bed. Tonight, for example, I said, "Let's go sing a song..."

"About birds," I agreed and picked him up to carry him off to bed.

"Car-car!" he said, reaching for some matchbox cars he'd left strewn on the floor.

"While holding some cars. Why not?" I said.

We stooped to pick up the cars and I tucked Benjamin happily into bed with a car in each fist and a doll resting snugly in the crook of his arm. We said his prayers and then I sang my "bird" repertoire: A Happy Song followed by In The Leafy Treetops followed by My Heavenly Father Loves Me. Sometimes I can squeeze a different/extra song in there but he usually won't tolerate a lullaby without the word "bird" in it for some odd reason (so sometimes when I'm desperate to sing something new I'll sprinkle the word bird in at random in place of some of the regular lyrics—just to mix things up a bit).

To think that in five years he'll be getting his bike out of the shed, riding around all afternoon, putting his bike back in the shed, locking up, and returning the key—just like Rachel did this afternoon. She even put away Miriam's bike for her. I was so impressed. For real. Even if Rachel never plays soccer in the Olympics there's hope that she'll turn into a responsible adult.