When Benjamin was in the hospital he'd often be swaddled with his hands up by his face. Yesterday he fell asleep with his hands clasped together and I caught a little glimpse of the baby he used to be (and realized what a wonderful boy he's turned into). It's funny how much has changed and how much has stayed the same. His hair still has that uncontrollable static-ball look to it, though it's blonde now rather than brown.

He's developed eyebrows (and luscious eyelashes). That's noteworthy. Oh, and his skin's not translucent and paper thin anymore, either.

Instead of wearing a preemie outfit (with the sleeves rolled up) he's wearing a t-shirt with a car on it.

He's become quite picky about his clothes recently. Acceptable shirts have vehicles or animals or some other sort of "picture" on them. Unacceptable shirts have stripes or are otherwise too plain. He's very good at expressing his opinion. If you offer him a plain shirt he will likely throw himself on the floor and wail, "Nooooooooooooo!" And then he will scream the name of whatever "thing" he thought should be featured on his shirt that day. "Car!" for a vehicle shirt. "Rawr!" for a BYU Cougar shirt. "Nino!" for a dinosaur shirt. "Hah-hah!" for a dog shirt (because dogs don't bark; they pant).

If I can't find a suitable shirt he will often insist on staying in his pyjamas all day because he has more "fun" pyjamas than shirts, I guess.

Anyway, he was not that particular about clothes in the NICU. We had only a few outfits for him. The rest were whatever the NICU had on hand (and some of those outfits were beyond hideous so if you're wondering how you can make the world a better place, go ahead and donate some adorable preemie outfits to your local NICU). Truthfully, though, we were simply happy when he met the requirements to be allowed to wear clothes (he had to be clear of jaundice and had to be off IVs...I think...).

His vocabulary is growing steadily now. Just this evening he added a new word: choose!

I had read two stories to the kids (Mama, Will You Carry Me? and Miss Lina's Ballerinas) when they asked for one more.

"Can I choose it?" Rachel asked.

"Choose!" Benjamin wailed, throwing himself on the floor dramatically. "ME! CHOOSE!"

He throws such pathetic tantrums. Usually he ends up peeling himself off the floor and snuggling on my lap sniffling quietly to himself over all the injustices of the world. Tonight was no different.

Rachel brought back one of the longest picture books in creation: The Graves Family by Patricia Polacco. Ordinarily I consider myself a Polacco fan but today was yet another "snow" day (hint: there was no snow (though it did give us enough ice to put several thousand households out of power and down several 100 year old trees)) so I'd been with the kids all day (which means I was reading stories off and on all day as well because reading is one of their very favourite things to do) and we'd just had a family movie night so it was already past bedtime. And the book is 48 text-heavy pages long.

Benjamin did alright through the first few pages because he has this inexplicable fascination with creepy things, but he soon got bored and left my lap to scavenge for stories elsewhere. He kept bringing books over and begging me to read them and throwing fits when I wouldn't. I think he eventually roped Andrew into reading him a few stories while I plugged through The Graves Family.

"This story is so long!" I complained about halfway through (loud enough for Andrew to hear in the bedroom). "I don't know if I'm going to make it!"

A few minutes later Andrew brought Benjamin back to the living room to finish getting him ready for bed. "You're almost done!" he cheered. "Just a few pages left."

I've haven't been so happy to finish a story...since the last time I read Toy Story 3: Together Again to Benjamin (he's had the book for one week, he's obsessed with it, we've read it probably a million times so far).

All three kids ran off to get into bed—all together in the top bunk—to have personal reading time. 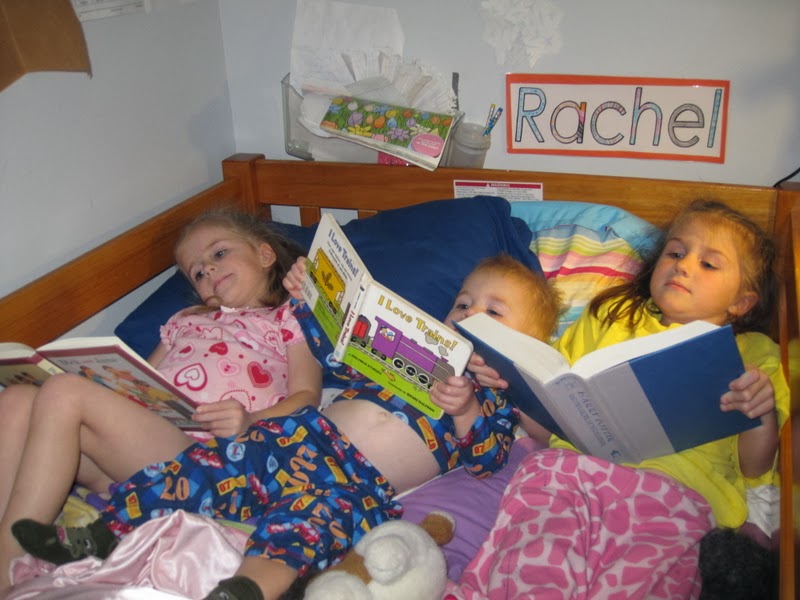 Rachel's reading Harry Potter 5: The Order of the Phoenix. She finished reading books one through four yesterday (again). So we let her move on to number five because this is the conversation we had when about book four:

Me: Did you finish? Rachel: Yup.Me: How was it?Rachel: Good.Me: Did you like the ending?Rachel: Yup. It was good.Me: But Cedric dies! Wasn't that scary?Rachel: Yes...Andrew: And Voldemort comes back to life! How is that good?Rachel: Because that's the only way to have book five and I want the story to keep going!

Miriam's reading a Dick and Jane anthology. I don't know how many times she's read through it. I'm sure she has it completely memorized by now. She likes it because it feels like a novel to her.

Benjamin's just flipping through the pictures in I Love Trains! He can say train (chruh!), squirrel (skir!), cow (moo!), pig (pih!), baby (baby!), dad (dada!), and many other words in that book.

It's crazy how quickly they're all growing up!
Posted by Nancy at 12:47 AM