On Saturday morning the girls were very excited to find that Jennifer, our hostess, had supplied sugary cereal for breakfast. Her boys have been enjoying trying all sorts of American things since this is their first time living stateside and she knew that our girls only get sugary cereal on their birthdays so she though this would be a fun treat for everyone—that's what vacations are for!

After breakfast we headed out to the Jimmy Carter Presidential Library and Museum where we learned all sorts of things about President Carter. He wasn't very popular during his presidency for whatever reason ("completely ineffectual," according to some) but he's certainly done some amazing things throughout his lifetime. Andrew and I are kind of fans of his. We read his books and things like that.

I don't remember if it was me or Jennifer who suggested going there (we'd chatted about several ideas) but when I asked Andrew what he thought about going to the Jimmy Carter Presidential Library he got a gleamy look in his eye and I knew that's where we'd be going.

It was fun to learn more about President Carter because I actually didn't know much about him. And I've actually only read one of his books (but it was a good one). Andrew's read more of his writing and has studied some of the efforts of the Jimmy Carter Center so he was a bit more knowledgeable about things. Andrew has also had US History drummed into his head for his entire growing up years and I...missed out on that...so he usually knows a bit more about presidents than I do.

So apparently Jimmy Carter was a peanut farmer. There is a lot of peanut paraphernalia in the museum. Like a lot a lot. I actually really like that he's not a professional politician—and perhaps that explains his "ineffectualness"—but honestly I think he was a problem solver and a kind and determined man. I could tell he felt badly about how his presidential years went (he called it his "forced retirement" in the little video they showed (which, incidentally, Martin Sheen narrated)) and I wish he could have had another shot at it because perhaps he could have done more. But I also admire what he's done with his post-presidential affluence and influence—far better than painting selfies in the shower (and I say that with a chuckle because Bush has done some good things and will do more good things with the power that comes with his title and experience, I'm sure (and because there's nothing wrong with painting)).

Anyway, I think the little kids—Miriam, Benjamin, and Abraham—enjoyed the little submarine model the best. The older kids enjoyed playing there as well but I think they liked the computer-based welfare "missions" at the end of the museum the best. Here they are playing in the submarine: 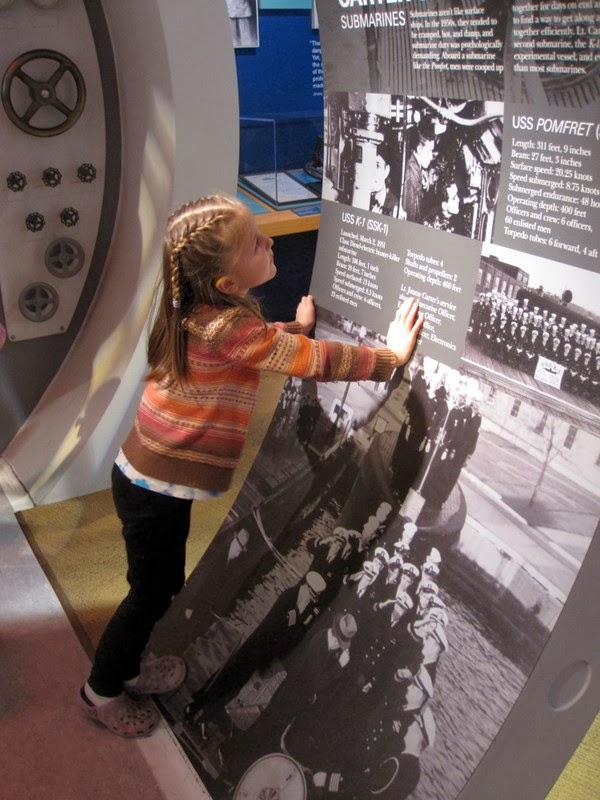 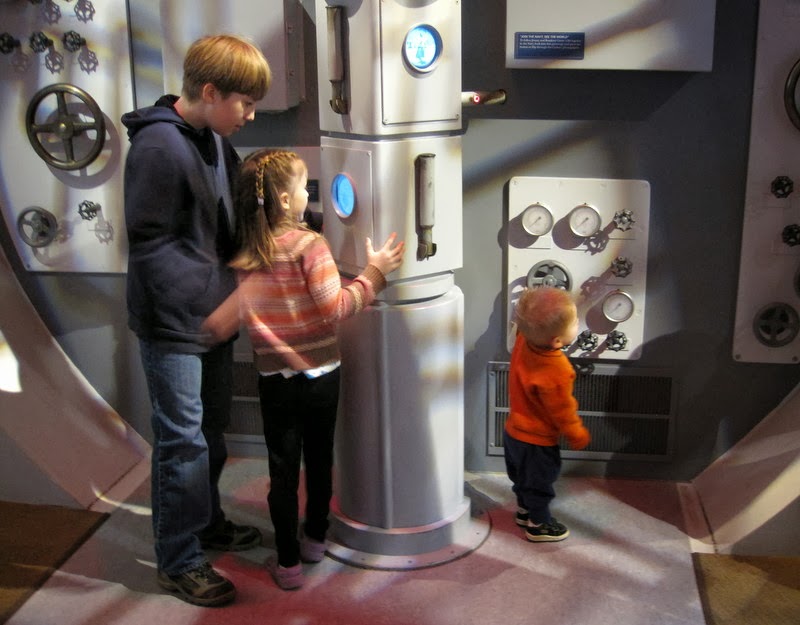 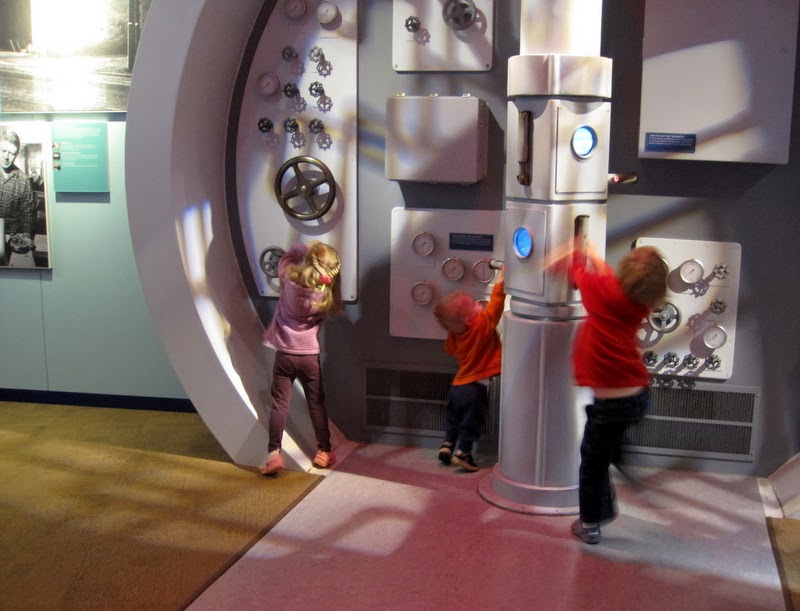 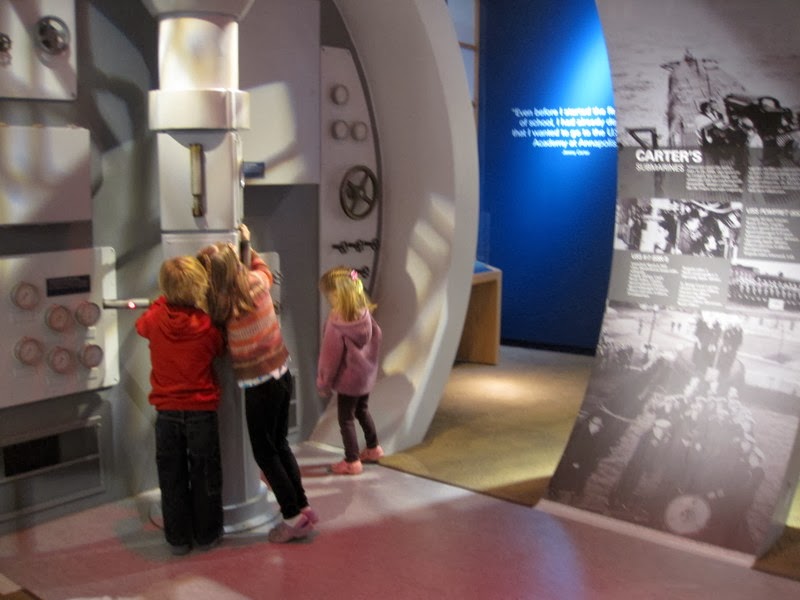 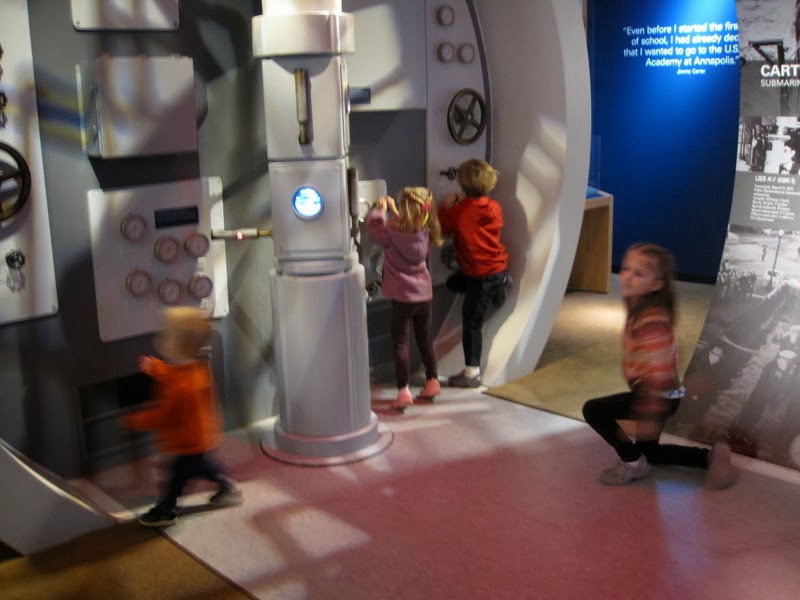 I liked this quote about President Carter: 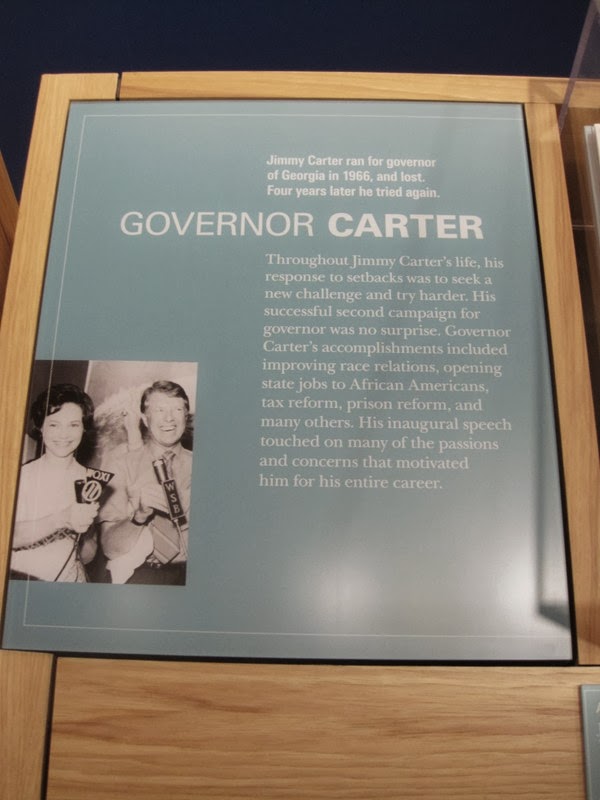 I don't think there's much more embarrassing than "failing" as a president (though, I mean, you were president so perhaps that can be the consolation prize) but look at how he again picked himself up, found a new challenge, and tried harder. I think that's a great message for everyone.

Benjamin mostly tried hard to break into various exhibits. He once ran into a sheet of plexiglass, trying to get at something stuck behind it (it's a good thing the museum thought to put plexiglass on all sides of the cases—the one that Benjamin bumped into looked like there wasn't glass on the side (even to me) so I can understand why he ran into it, but it was still pretty funny. 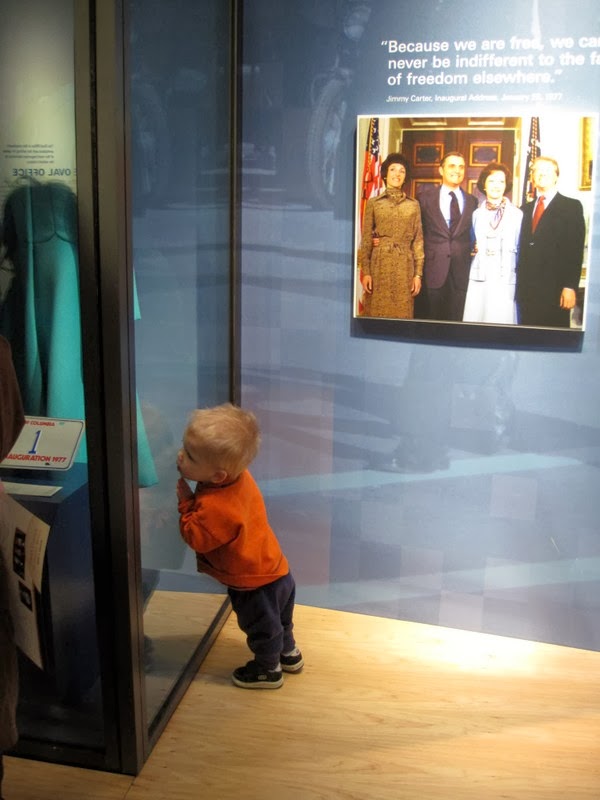 The replica of the Oval Office was neat to see, though I think our emotional attachment to the room was more from The West Wing television show than from any real life presidency. Most of the room was roped off and the public was only allowed in a little section. Benjamin's so short that he didn't even notice there was a roped of section. He strutted right under the rope and into the middle of the room and I had to reach over and pull him back. I'm glad no one official saw it (except for maybe via security camera). 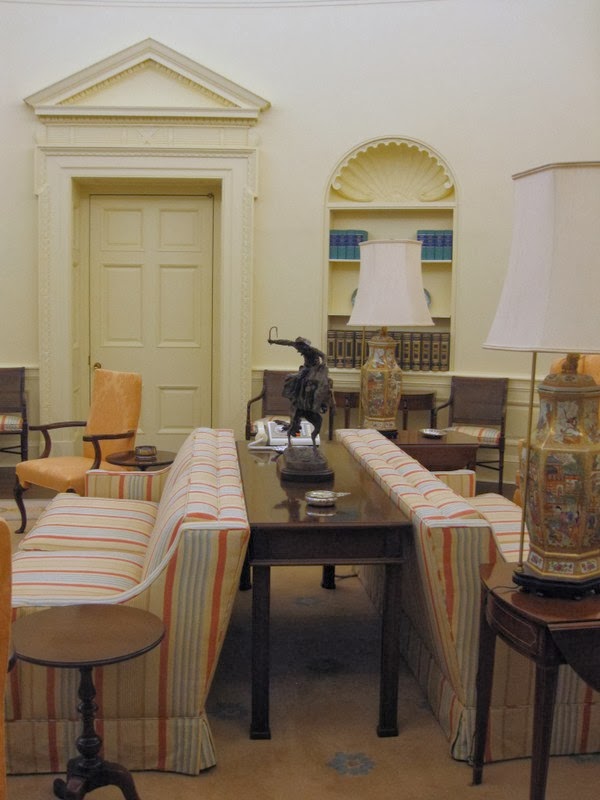 This will be Andrew's office one day: 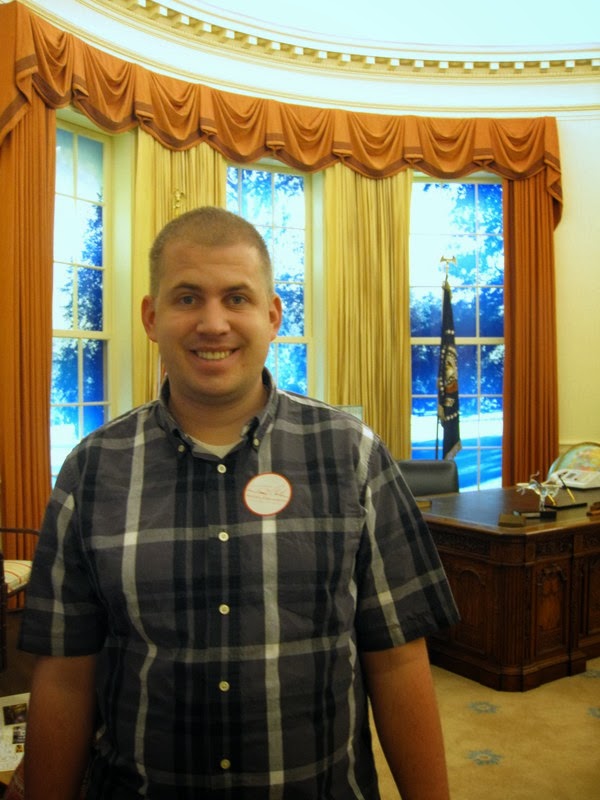 Oh, for some reason Rachel at the windows (which are fake) and said, "It's snowing!" and then Benjamin was obsessing about snow for a long time after. 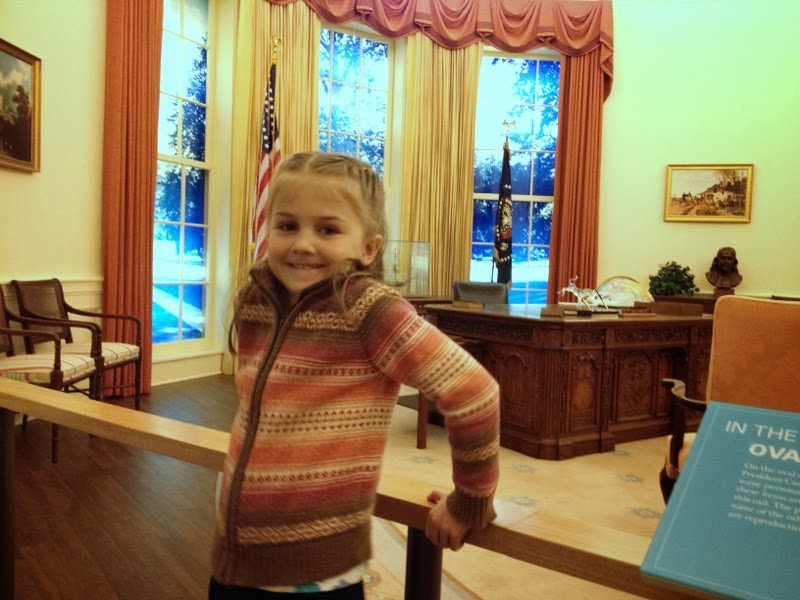 One part of the museum had a video talking about the traveling the Carters have done with their foundation and the seats for the video were airplane seats. The kids thought that was so neat! They can't remember ever being in an airplane (though they've all flown before). 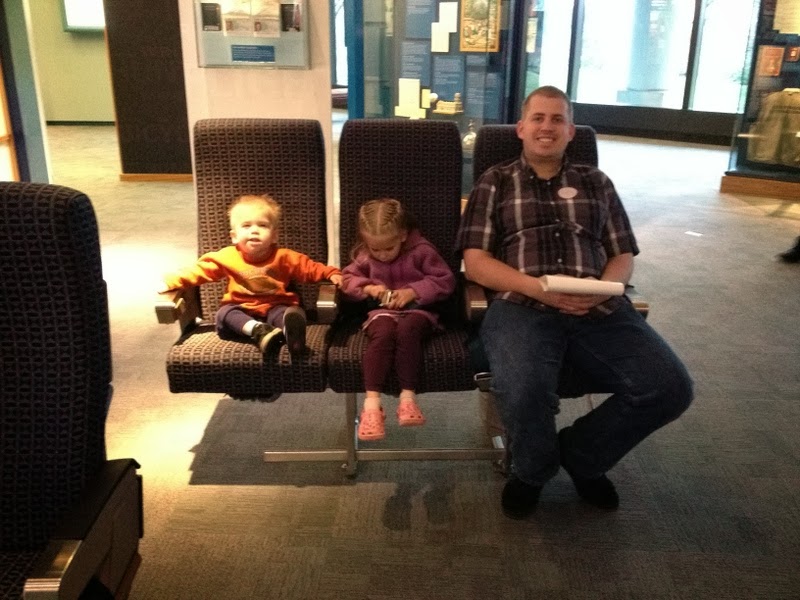 And then they realized there were first class seats so they decided to try those out (since that's a privilege we don't often ever get):

Here's a random picture of my kids goofing off on a bench: 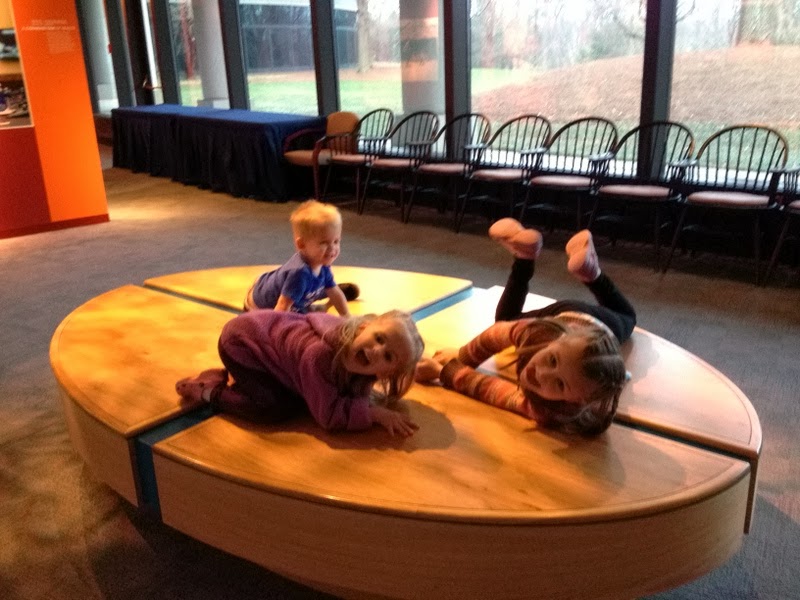 And here they are writing messages to President Carter at the very end of the museum: 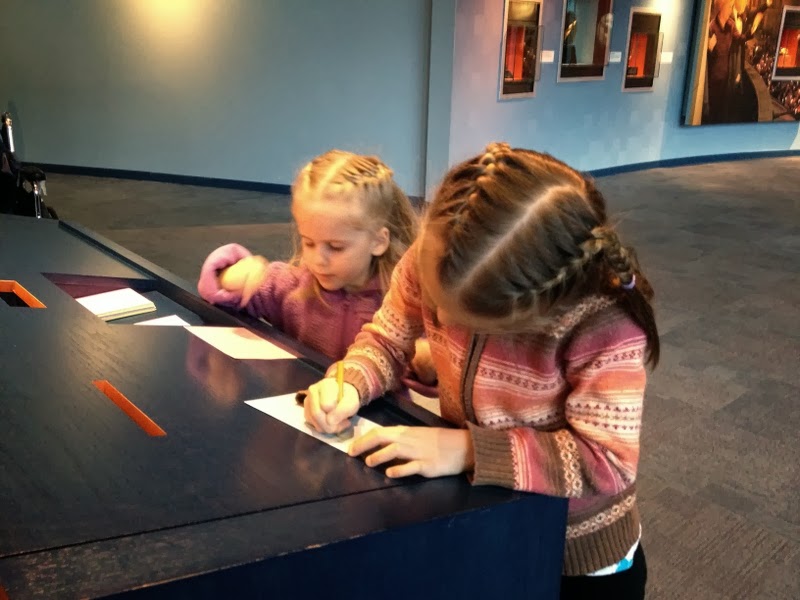 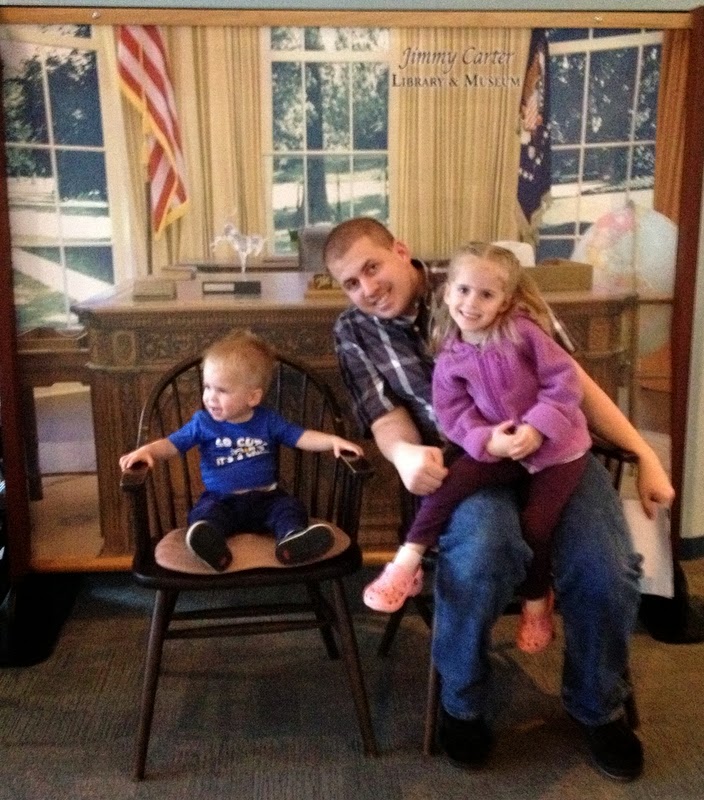 Rachel wasn't sure what to write so we talked about it and then she very thoughtfully wrote out, "Thank you for doing so much for so many. I love learning about how you help so many." And she really did—she probably could have stayed at that computer center, solving global crises for hours.

Miriam, on the other hand, was sure what she wanted to say and asked me to help her write, "Dear Jimmy Carter, I get to visit my Naanii today!"

I told her that perhaps she could draw a picture instead. So that's what she did. President Carter seems like such a nice person, though, I'm sure he would have been happy to learn that Miriam got to visit her Naanii (after not seeing her for a year and a half (which is forever in kid-years)).

After we were finished writing our cards we headed to the restrooms (that always seems to be the first and last place we visit anywhere we go (often with little trips in between coming and going)).

Here's Jennifer's biggest and littlest boys hanging out with my little guy in the lobby: 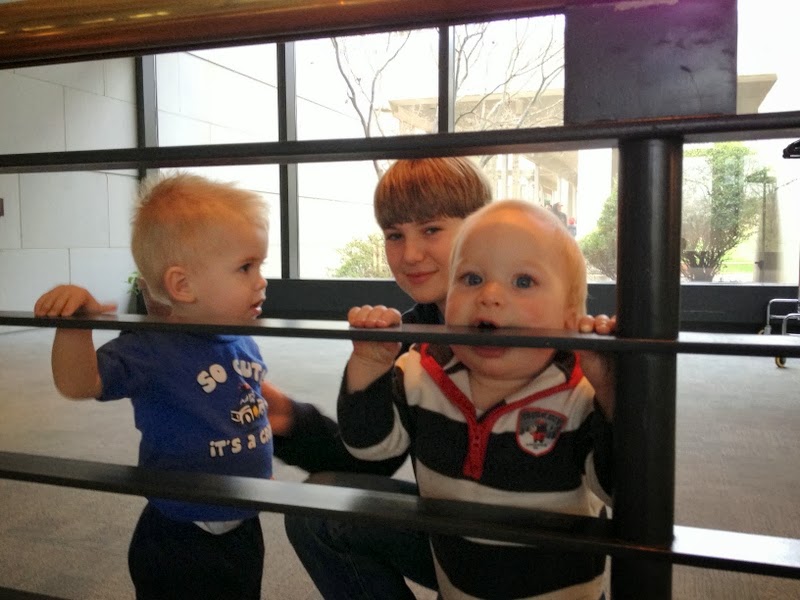 Benjamin and Max were sticking their heads through the bars and making funny/happy faces at me but I couldn't ever quite catch them doing it at the same time (August is back there making sure Max doesn't fall over). 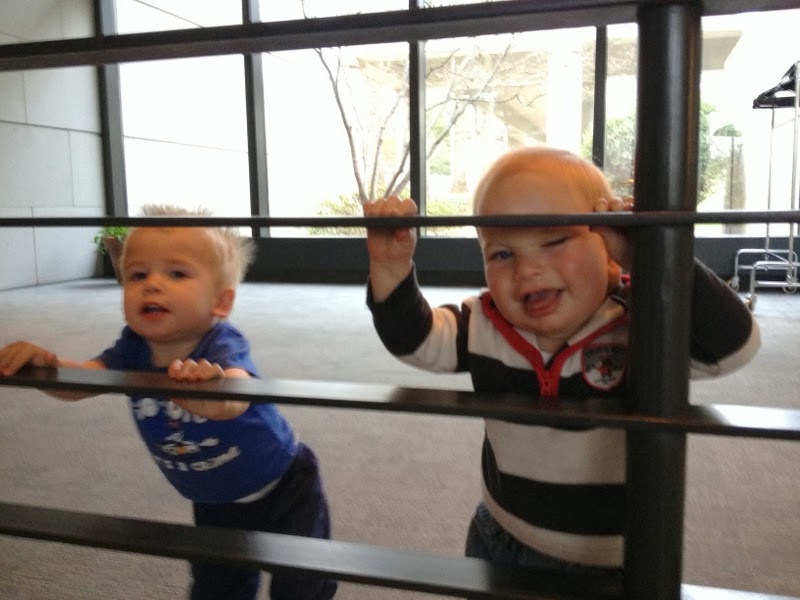 There's a lovely garden outside of the museum and the Carter Center. We walked around it before heading to the parking lot. 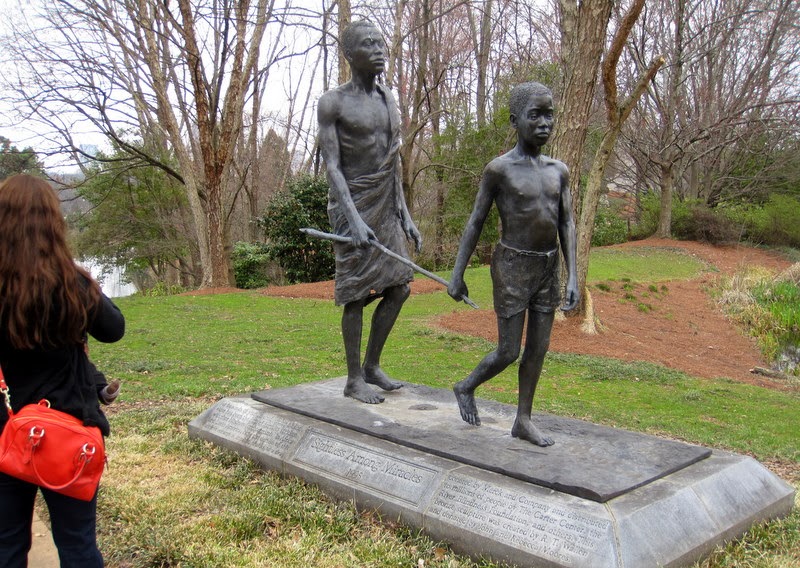 Miriam and Abraham had fun doing some tree climbing (which slowed us down quite a bit). 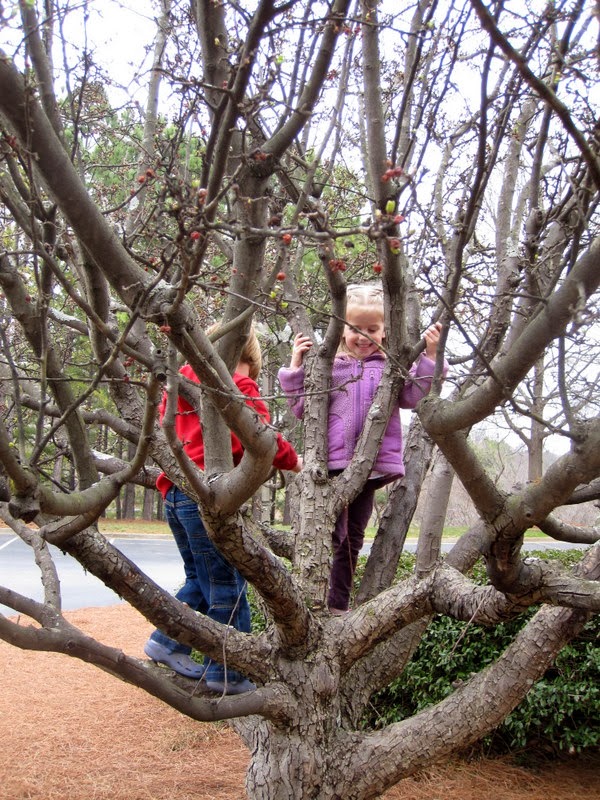 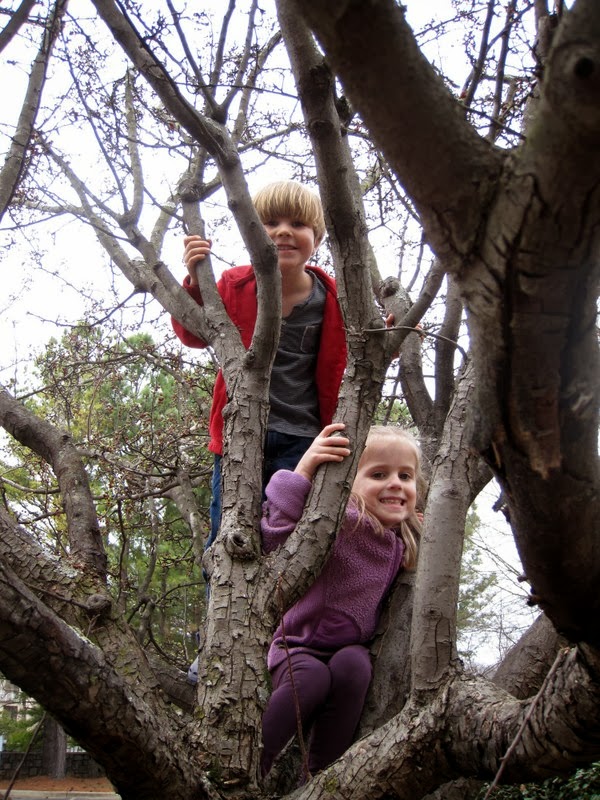 Sadly, we managed to not get any pictures of me and Jennifer together. We were both there, I promise. The last picture I have with any of our kids together, I think, is this one from March 8, 2010 (Jennifer had Rachel over to play while I tutored one of her neighbours and took this picture of the kids enjoying a snack and a show): 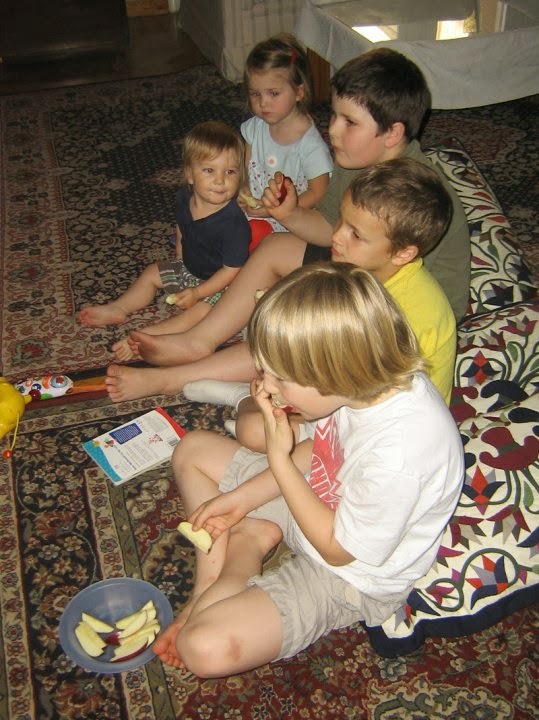 Rachel (the only girl) is at the far end with baby Abraham beside her, then William, then Morgan (the brother of the girl I tutored), and then August. Miriam was too little to want to go play so she stayed with me. Things certainly have changed in four years!

After the museum we decided to get lunch before parting ways. We tried to go to a place called The Flying Biscuit but it was packed. We eventually found a place to park on a side street and Andrew laboriously attempted to wiggle his way into the spot (parallel parking—is anyone a fan?) but then Jennifer found us and suggested we try something different since we had limited time and people were lining up outside to wait.

We ended up at Five Guys, which was still a little crowded but not too crowded (oddly enough, the last time (and perhaps only other time) we ate there was with another friend from Cairo—Jaehee—when she visited us in Utah a couple of years ago). The potatoes that day were from St. Anthony, Idaho, which is where Auntie Emily and Uncle Morgan last lived (right now they're living with Reid and Karen who are doing their best to be empty nesters but somehow manage to keep filling their nest back up with fledgling adult children (the nerve of some children!)). We thought that was fun!

Shortly before 2:00 Jennifer's family had to run off to a math-talk and we had to run off to meet my mom so we finished our lunch and said our goodbyes and headed off into the wilds of Atlanta traffic. (Thank goodness for our GPS, that's all I can say!)

Thanks for having us, Jennifer, and for showing us around Atlanta! It sure was fun to visit with old friends!
Posted by Nancy at 12:34 AM