Grandpa and Rachel have had a longstanding plan to go to the new Hobbit movie the day after she got here, so she was busy on Friday afternoon (along with Grandpa and Grandma and Daddy). I, however, needed to get down to Provo to visit with my friend (and famous author) Shallee before she moved that weekend, so my mom came to pick me and the little ones up.

We spent a few minutes at their house so Naanii could eat some lunch. Bumpa and Auntie Josie set up the ball pit for the kids to play in and they went wild playing "microwave popcorn" and "swimming" and doing all the other fun things you do in a ball pit. 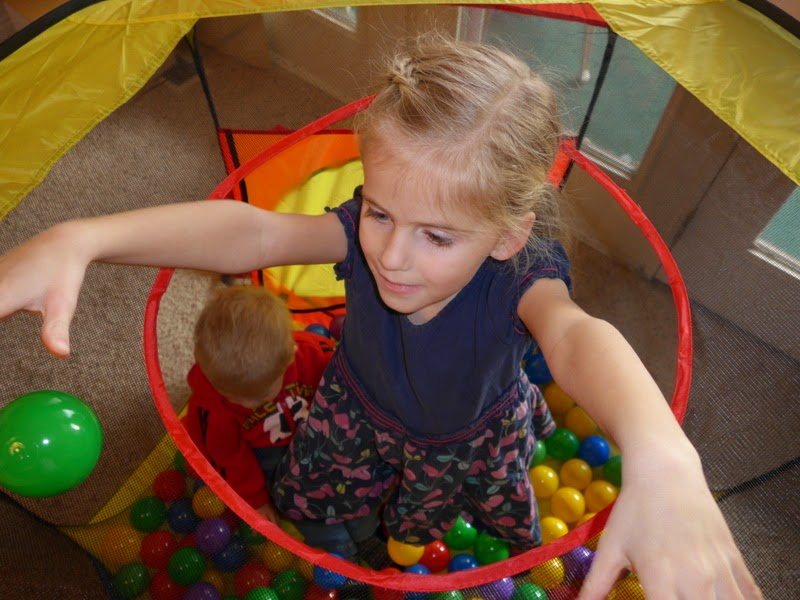 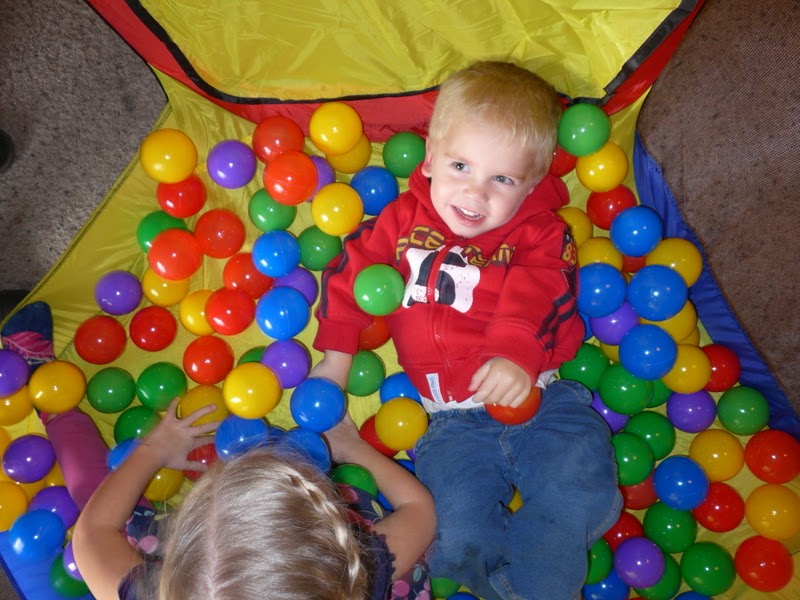 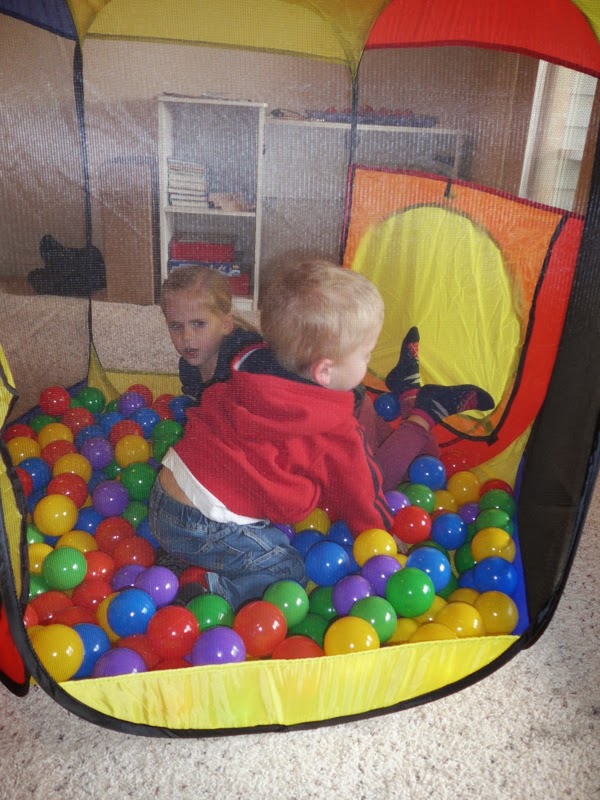 Uncle Patrick joined us for our excursion to the Bean Museum. They'd just closed it for renovations right before we moved to North Carolina, so for us it was new and improved (though we found some familiar exhibits as well). 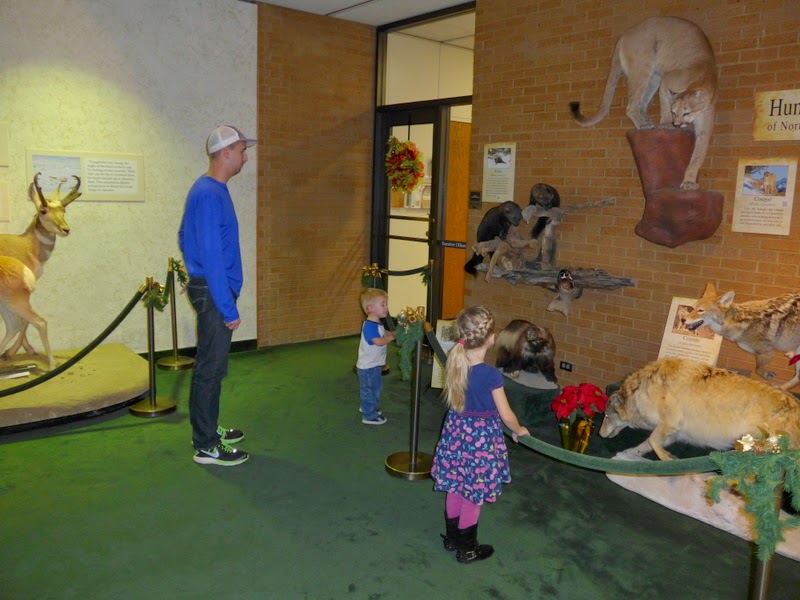 Shallee's little ones As. and Am. are the same ages as Miriam and Benjamin. Miriam's a couple of months younger than As. Benjamin and Am. were actually due within a couple days of each other, which means that Benjamin is a couple months older than Am.

The kids got along like old pals and it was so much fun to see Shallee again. My mom gave me a copy of Shallee's book, The Unhappening of Genesis Lee, and Shallee signed it for me. She also signed a bookmark for Rachel (who was quite torn between going to The Hobbit and going to the Bean Museum to meet an upcoming author). 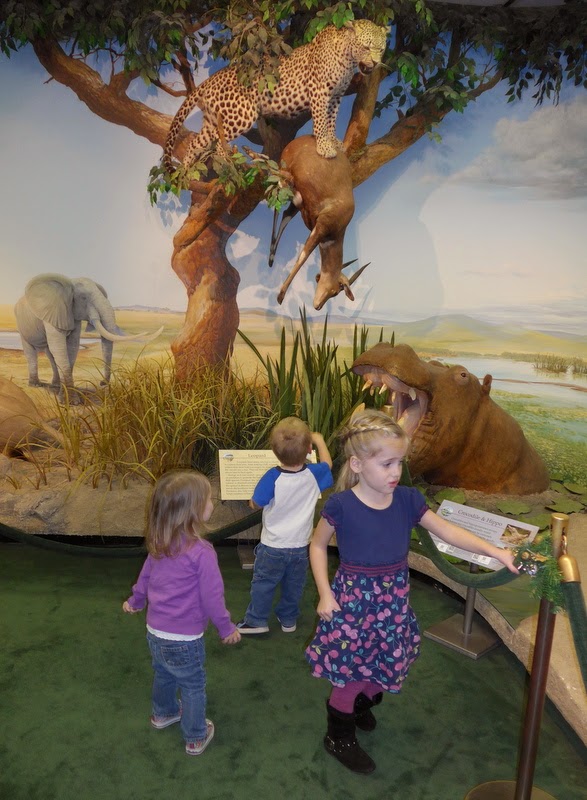 Benjamin's on the small side of things so I was quite happy to see that Am. was about his same size (a little smaller actually, though she's "on the chart" while he's not (because boys are supposed to be bigger, I guess)). I joked to Shallee that if he can't find anyone short enough to marry, there'll always be Am. We could just set them up right now! 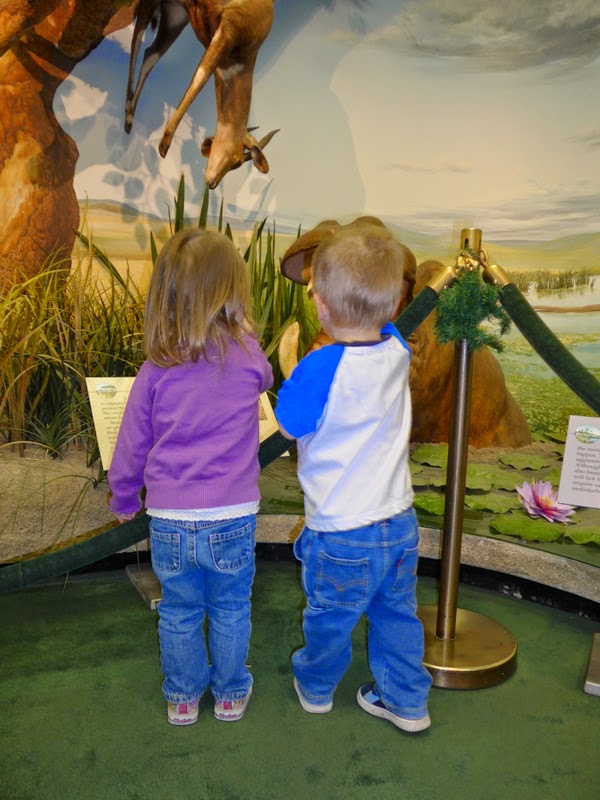 One of the employees kept bringing out different hands-on exhibits for the kids. It seemed like every time we walked by he was carrying around something different. First he had a tiger's head and he invited Benjamin to pet it. Benjamin refused to touch it until I held his little hand and helped him stroke it. Even then he recoiled and hid in my shoulder saying that tigers are scary. But then? Then he walked around to the front of the tiger's face, exclaimed, "Oh! Look! Big teeth! Sharp teeth!" and stuck his hand right in the tiger's mouth! Silly boy!

Here are all four kids petting a lion's head: 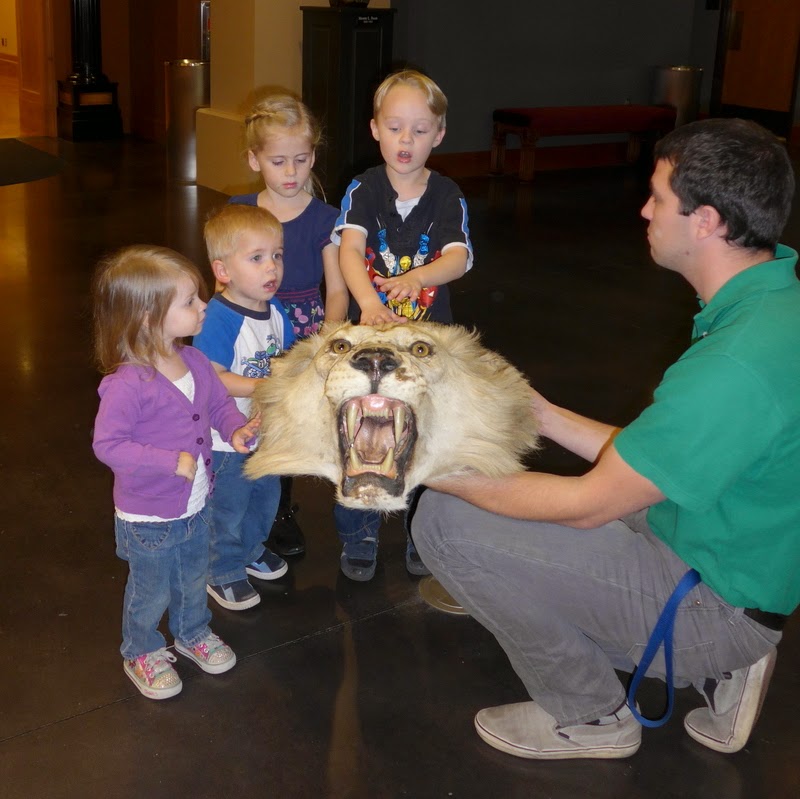 The most popular area for the kids was the little play area. It has a slide and cave and that's about all but the kids thought it was great and we spent a long time over there. The kids, however, refused to go through the cave, claiming that a fierce wild beast lived inside so it was too scary. 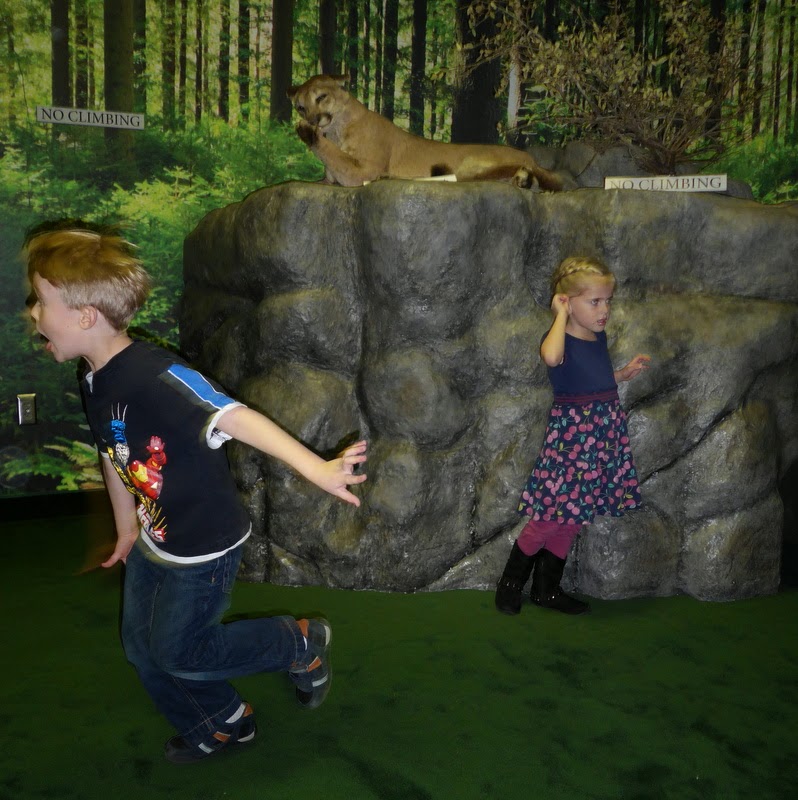 All the grown ups were skeptical that a cave in a children's play area would have a fierce wild beast inside, but the children insisted, so eventually Uncle Patrick decided to check it out since no one else was going to.

"They're right," he called from inside the cave. "There's a bear in here."

I got down on my hands and knees to peer inside and--would you believe it?! 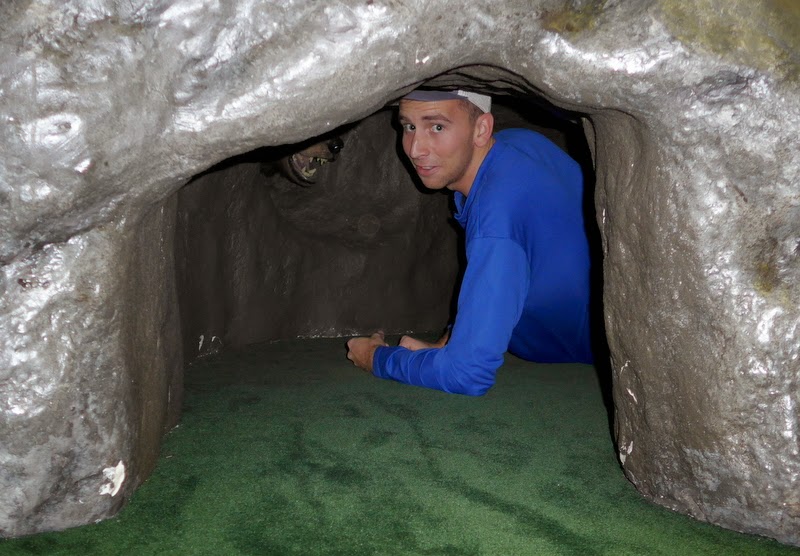 There is a scary bear inside that tunnel! 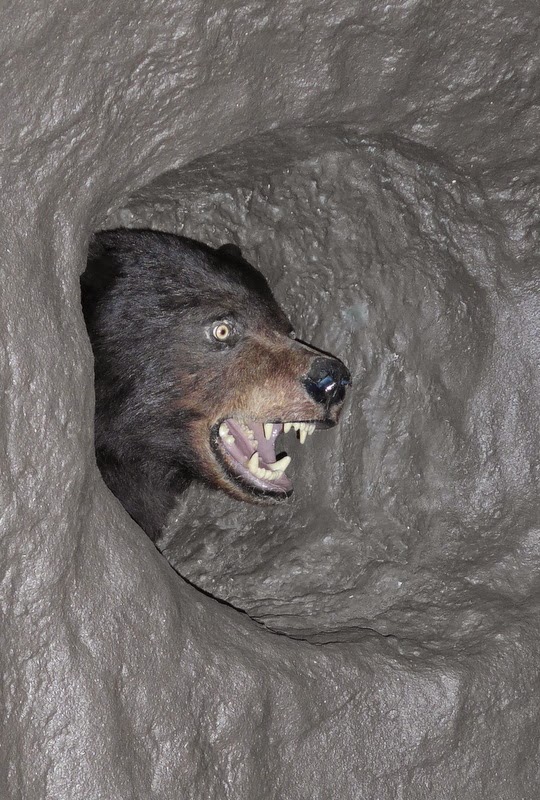 They couldn't have had a sleeping bear or a cute little fox all curled up in a ball. Oh, no! They had to have a big snarling bear head! The kids were terrified! (The grown ups were highly amused because whose idea was that, really?)

Here's Benjamin being concerned about Uncle Patrick. "Is he stuck in the cave? Did the bear get him? Should I get help?" he's wondering. 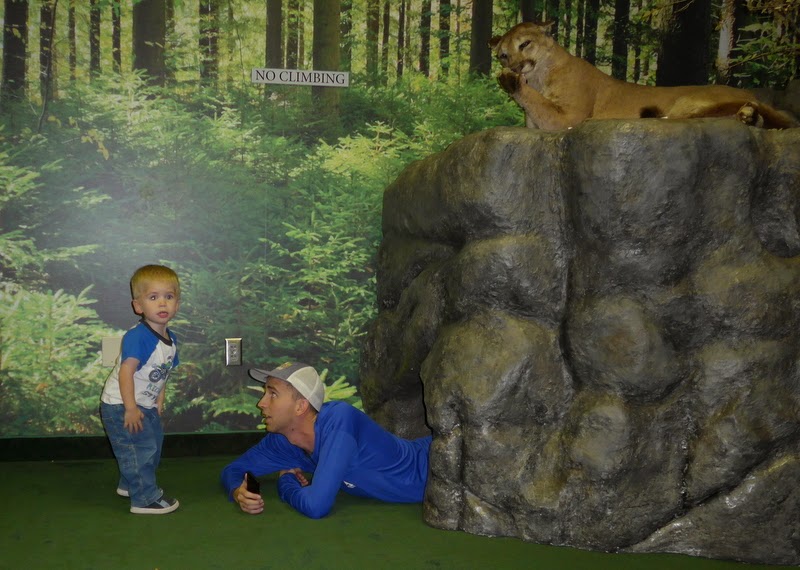 And here he is running over to tell me about it: 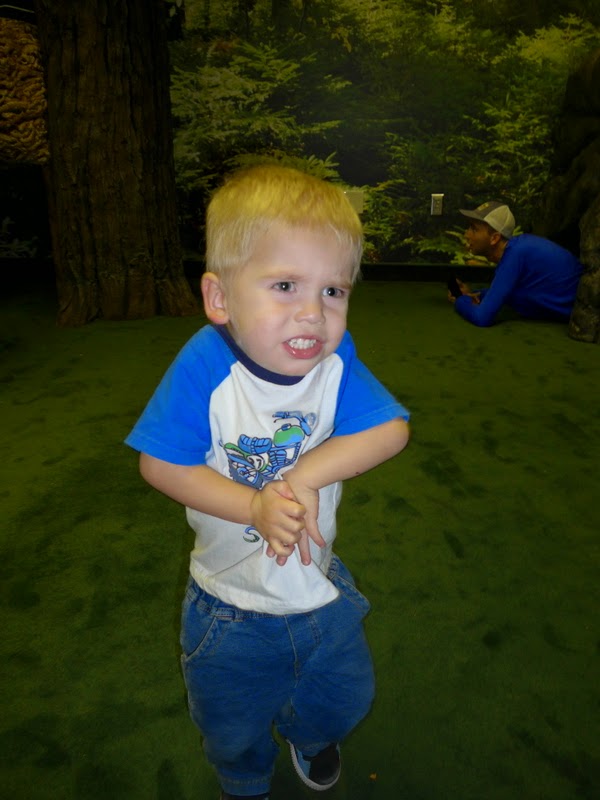 After heading upstairs to complete that floor five or six times (it's a loop--the kids were treating it like a race track) we bid farewell and good luck to Shallee and headed back home to Naanii's house.

Did we do something else this day? Why did I wait so long to write everything down?!

Eventually Daddy and Rachel joined us and we spent the night. Josie was sweet and slept out on the couch so the girls could leave the light on in her room (because Josie prefers to sleep in the dark and my girls prefer to sleep with a light on).
Posted by Nancy at 2:34 AM