Our ukulele choir has shrunk a little since last year, but we still managed to meet together throughout the year to practice. It's possible we've even improved since last year. I'll be uploading some videos tonight, so stay tuned... Until them here are some "stills" from the video. I'm not sure anyone took any pictures. 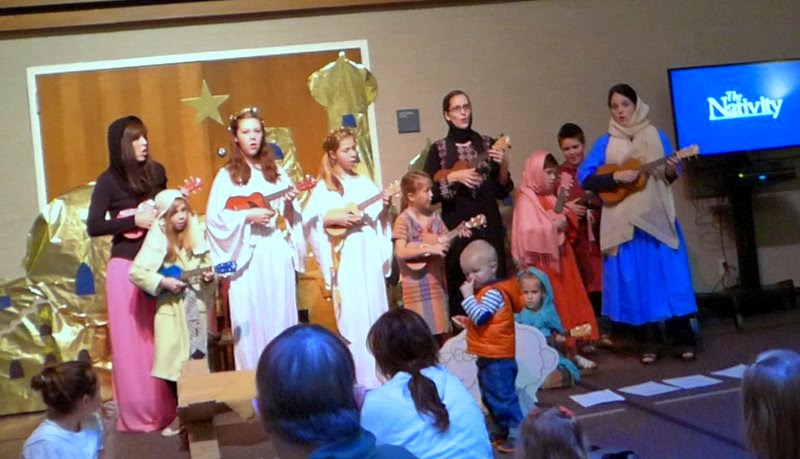 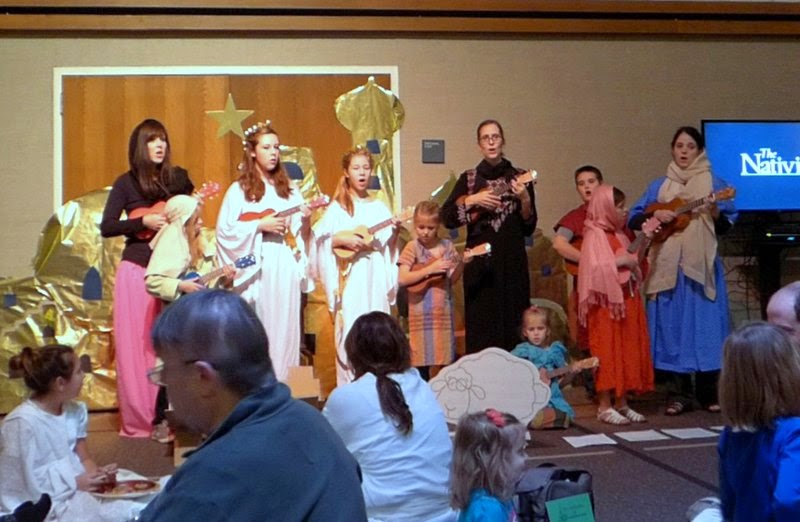 I made the girls practice with me this morning and we spent quite a bit of time clapping out rhythms and talking about timing. Both of them broke down in tears (at different times) because they "got behind."

"We're supposed to strum three times before we switch chords but I only strummed twice and you already switched chords!" Rachel cried.

I explained that the song keeps moving forward whether or not they do, so if they're supposed to strum 1, 2, 3 *switch* 1, 2, 3 *switch* but they switch too slow and miss the first beat...then they have to start counting on two rather than on one, which means they'll only strum twice. I eventually broke out the metronome and told them that every time it ticked was a beat and they had to strum every time and if they missed a strum, they missed a strum, and had to move on to the next one.

We practiced getting lost in the music (which is really easy when you're five, apparently) and then looking ahead so you can start playing again (because every measure starts again on count 1).

If I knew more about music than I do (because I don't know a lot) I could probably teach them a little more effectively. But they're five and seven and know a handful of chords and can point out time signatures and are learning to read music so even though it's a slow (and sometimes tearful) process, I suppose it's worth it.

They sang all the way home from the party, with Miriam interjecting, "Oooh! Christmas lights!' every now and then.
Posted by Nancy at 10:18 PM