Most of the day Wednesday was pretty quiet. The kids woke up fairly early in the morning (their little bodies being two hours ahead of Utah schedule). We had breakfast and then lounged around in our pyjamas, exploring all of Grandma's toys before starting our day. She took us out to run a few errands. We went to the library to check out some books because my children always want more stories. Then we went to IKEA to pick up a few things (outlet covers and some small chairs) and to have lunch.

When we got home Benjamin and I went down for a nap and Miriam hung out with Grandma. Grandma found a new Frozen game for her iPad and that kept Miriam occupied for quite some time.

In the evening we headed down to Pleasant Grove for cousin Kayl's Christmas concert. He's attending Spectrum Academy, a charter school for children with autism, and has been loving it! He's doing so well there. He's in grade one this year (he's only three months younger than Rachel but since he has an October birthday like Miriam he's a full year behind Rachel in school) and his class sang a cute called Reindeer Twist. All the students were dressed in a little reindeer costume with bells on their antlers and they'd shake their heads around while they were dancing. It was pretty cute.

After his number was over we left to go to dinner at The Purple Turtle. 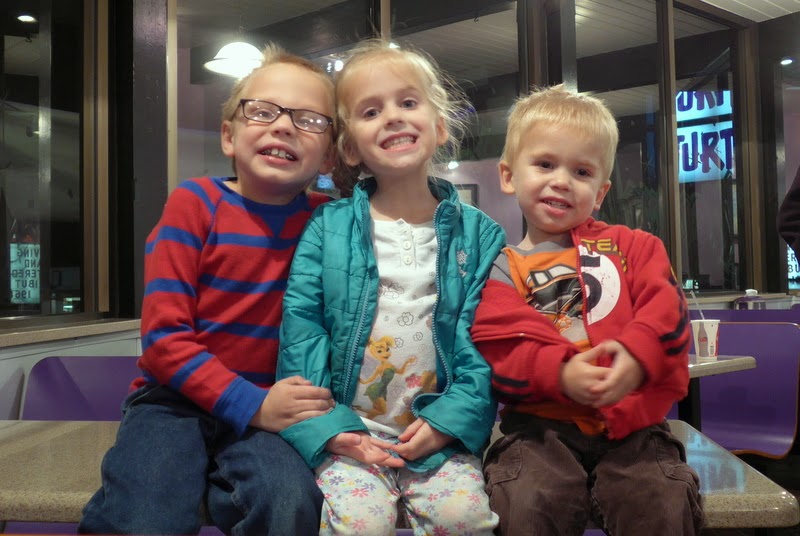 And then, because we were in the area, we swung down to visit my parents. The kids had fun exploring Naanii and Bumpa's new house (both my parents and Andrew's parents have downsized since we moved to North Carolina so we went "home" to strange houses) and seeing where they would sleep when we'd spend the night. Auntie Josie got out some volleyballs and stuffed animals for the kids to play with while everyone visited.

Miriam was completely convinced her ball was a soccer ball and she knows that you only use your feet for those, but Benjamin wanted his ball to be a "throwing ball."

"Keep it on the ground," everyone kept telling him. "It's a kicking ball. Put it down."

"Not kicking ball!" he'd say, lifting the ball over his head. "Shrowing ball!"

"No, no! It's a rolling ball. Put it on the ground and roll it around."

It was an ongoing battle, but I thought we'd finally gotten the message across and made the mistake of taking my eyes off of him to say something to my mom.

That little boy came right up to me with that ball raised above his head and wailed the ball at my face. It hit me square on the nose and--boy, howdy!--it hurt! I spent a couple of days with a very sore nose and the next time we visited Naanii's house those volleyballs were no where in sight (but some other toys had been brought out).
Posted by Nancy at 1:37 AM