A couple of nights ago I asked Rachel to retrieve "the best Christmas story ever" for story time. She looked at me a little strange, then went to our box of Christmas books and rifled around.

"Here?" she said, holding up a story.

"Okay, here," she said, holding up a different one.

"That's not it, either, Rachel. There's only one. It's not that hard to find."

"The one called The Best Christmas Pageant Ever," I said.

"Pretty sure I said pageant."

"You said story," Andrew confirmed. "Even I was wondering how she was going to magically pick out the right one."

Okay, fine. This has been happening to me a lot more frequently. I call it brain fog. And, yes, I blame it on my children—specifically on the littlest ones (like the ones the size of avocados). Anyway, we eventually did get out The Best Christmas Pageant Ever and now we're nearly through it. And last night we got to go to Miriam's Preschool Christmas Pageant! 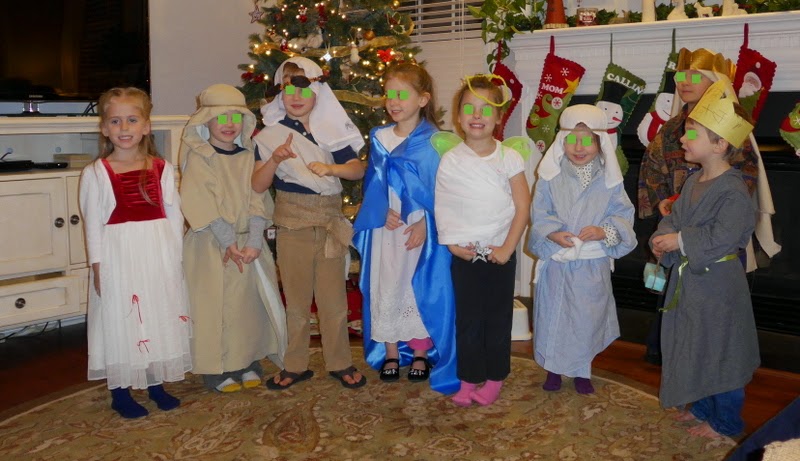 When she came home from preschool yesterday I told her we needed to get her costume ready. I asked her if she wanted to wear her Egyptian dress and a scarf but she replied, "No, thank you. I just need to wear a Sunday dress. Because I'm the narrator I don't really need a costume; I just need to look beautiful!"

She picked out the red and white dress she used as part of her Mary Poppins costume at Halloween. Right before we left the house she put on her little white sweater and we didn't notice until the very end of the production that she'd put one arm in her sweater, twisted it upside-down and right way up again, and then put her other arm in (so the back of her sweater was completely bunched up). But she still looked beautiful.

"It's a good thing she has long hair," Andrew quipped.

Here she is singing a song with her class: 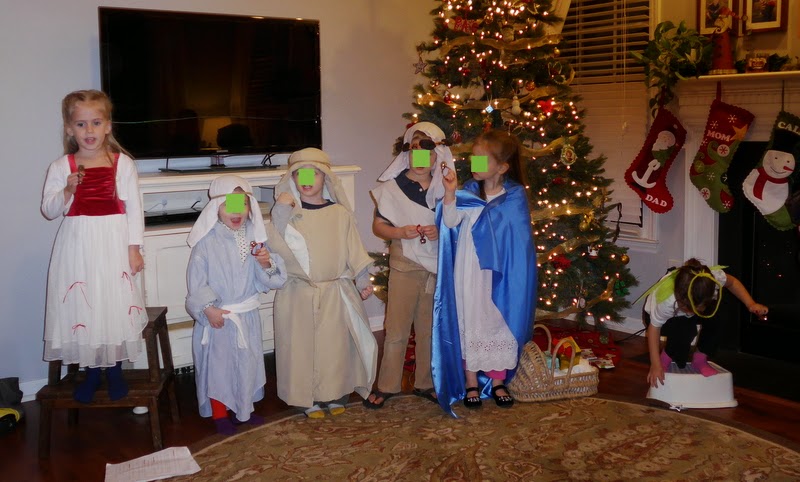 And here she is sitting on her stool: 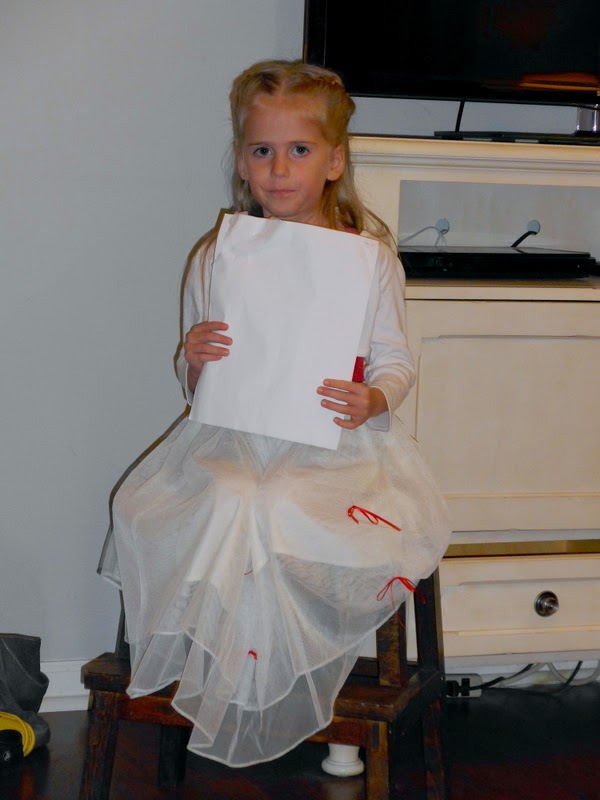 She took her job as narrator very seriously. She practiced her lines every day. She also practiced speaking loudly and clearly everywhere we went. I'm working on putting some videos up; we'll see if they ever finish uploading. Then you can see her take great big breaths before she starts talking and hear her loud, clear speaking for yourself.

And here are a few pictures of her adoring fans...

Benjamin, who is wearing his Egyptian gallabia over his clothes: 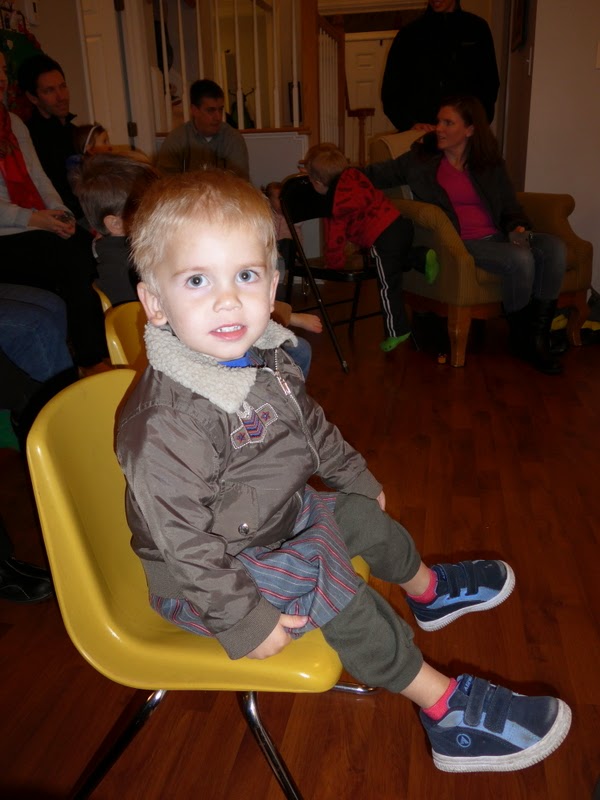 He has been loving dressing up as Joseph. Only he says, "Josie."

On the upside, he can say Auntie Josie's name! On the downside, he probably thinks her name is Joseph.

Sister Wood took this picture of everyone else: 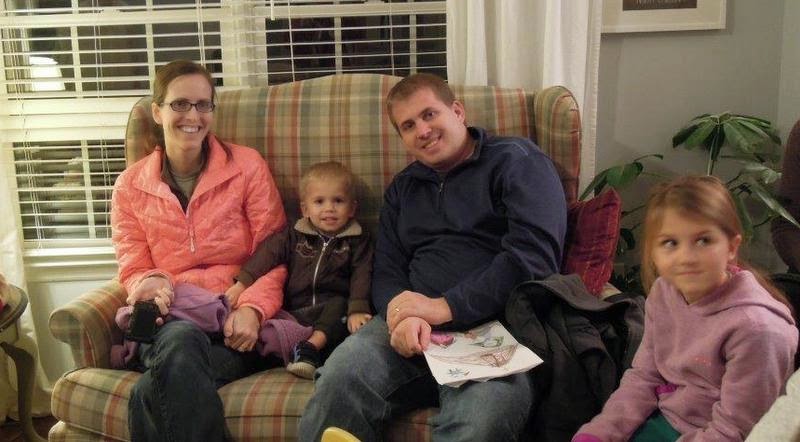 Benjamin almost went home with Sister Wood. She kept trying to leave and he kept running up to her and grabbing her hand. He just loves her.

And here's a picture Sister Wood got of Rachel: 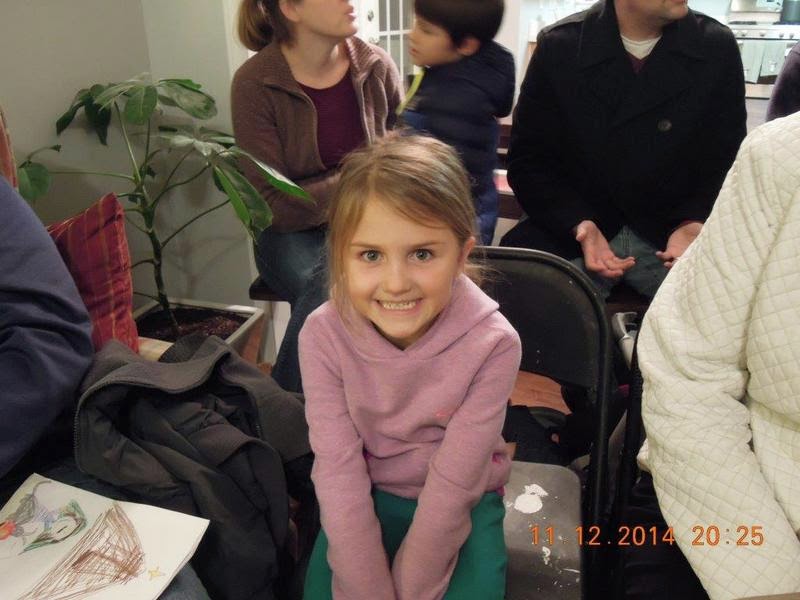 I think Rachel was more excited about the promise of hot chocolate and doughnuts than she was about the play.

Miss Annie's son Ollie (who is just about three) was so funny. She told him that if he sat nice and quiet through the play that he could have a doughnut. I think by the end of the play he had eaten and/or licked the glaze off four doughnuts! He just kept coming back with them! And the preschool kids took turns interrupting the play to say, "Uhhh...Miss Annie, Ollie has a doughnut again..."

And the child with that sense picture would answer, "Christmas looks like the birth of baby Jesus."

(That was Miriam's—she drew a nativity).

It was pretty cute.

At the end of the night they brought out presents for their parents—ornaments to put on the tree.

"It's made of leather," Miriam informed us.

It's a little Christmas tree with her picture on it and a 14 on the trunk.

Right. That makes sense. But for some reason it looked out of place like that. Andrew said it's because we're getting old; we wouldn't have wondered why, say, a 94 was on the trunk, but a 14? That's just weird.

My theory is it's because there was no apostrophe in front of the number. '14 would have made it much more obvious. That, or I'll blame it on the avocado thing again because we're not getting old.
Posted by Nancy at 10:43 AM