Miriam's been dying to take dance lessons again. She absolutely loved ballet and I thought it was the perfect fit for her. It was not, however, the perfect fit for our budget...but the same sports association that organizes Rachel's soccer league also has a cheer squad. My friend Suzi is in charge of it and kind of talked me in to signing Miriam up.

Tonight was the "first" night. All we did was have a meeting and try on uniforms, which was probably for the best since it's Miriam's turn to be sick. The poor thing can't stop coughing. Anyway, despite feeling terrible she was excited about the uniforms and pompoms and the list of cheers they handed out. 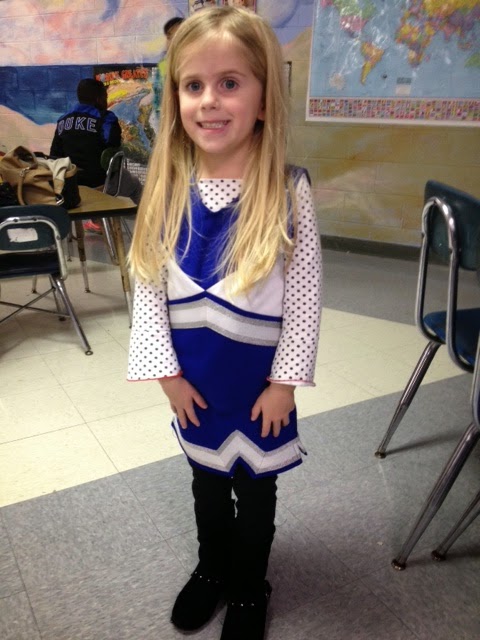 We won't meet again until after the Christmas break (we met early so they can order uniforms; and technically Miriam will be missing one week of practice) but she'll just have to continue living in anticipation (and doing made-up dances in the living room) until then!

Rachel said that she just wants to stick to soccer and then correctly recalled that Uncle David was once a cheerleader (yell leader, technically), so Miriam's carrying on the family legacy. I really don't know how often I've talked about Uncle David being a yell leader, to be honest. I was definitely the sort of kid who skipped out on pep rallies and secretly disdained cheerleaders. And yell leaders. Except maybe my brother. He was pretty cool.

But, ugh, his "friends" made my life miserable—stealing my homework from the in-basket, plagiarizing it, and turning it in for themselves, and so forth.

Miriam's not going to be that kind of a cheerleader. At least, she'd better not!
Posted by Nancy at 10:25 PM