It's been weirdly warm here (until tonight...). We've had jacket weather, rather than coat weather. It's been raining rather than snowing. And it's just a lot warmer than we thought it was going to be (but there's a storm coming so I'm sure that will change).

On Thursday morning, however, while we were anxiously awaiting the arrival of Andrew and Rachel, it started snowing while we were eating breakfast. Benjamin and Miriam could hardly finish their cereal before heading outside (if I remember correctly we had to drag them back in from the porch because looking out the window wasn't good enough). As soon as they'd gulped down the last of their milk they were begging for hats and mittens.

Grandma and I got them bundled up and sent them outside to play. It was no big surprise that they were the only kids out there enjoying it. Anyone looking out their window at them probably thought they were crazy for being so excited over a little skiff of snow. 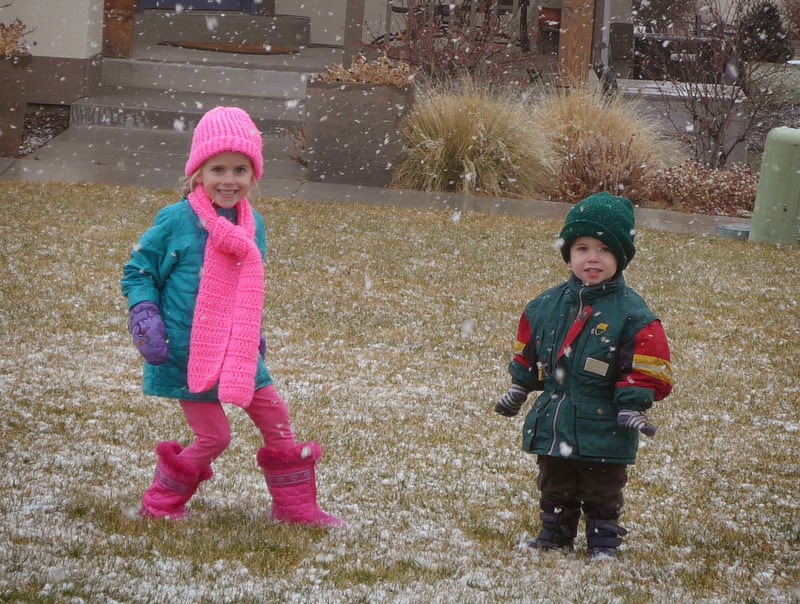 They made zigzagging tracks all over the lawn and eventually lay down to make snow angels! 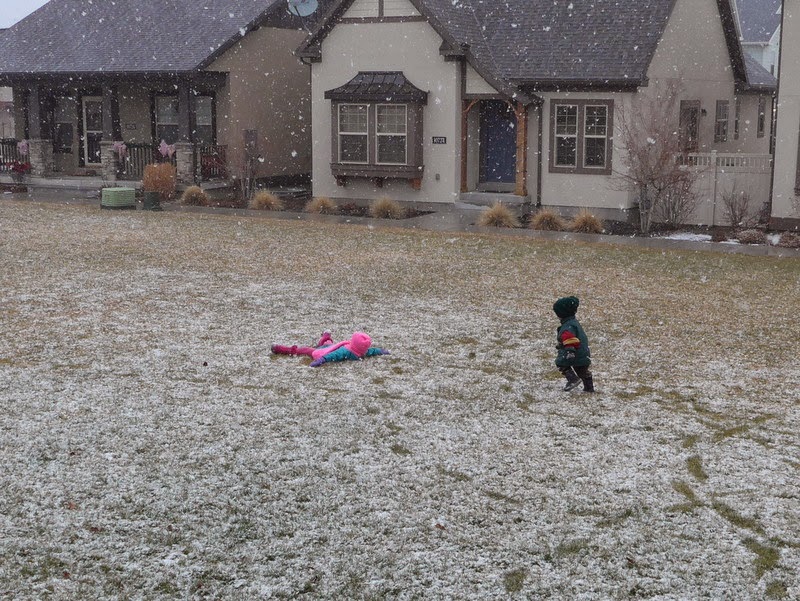 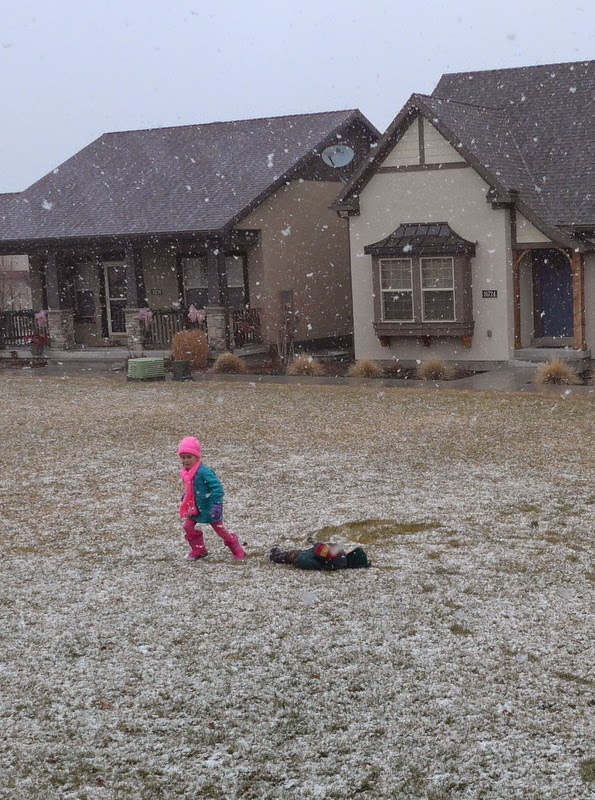 Here's Benjamin holding some snow out to me and saying, "See?" 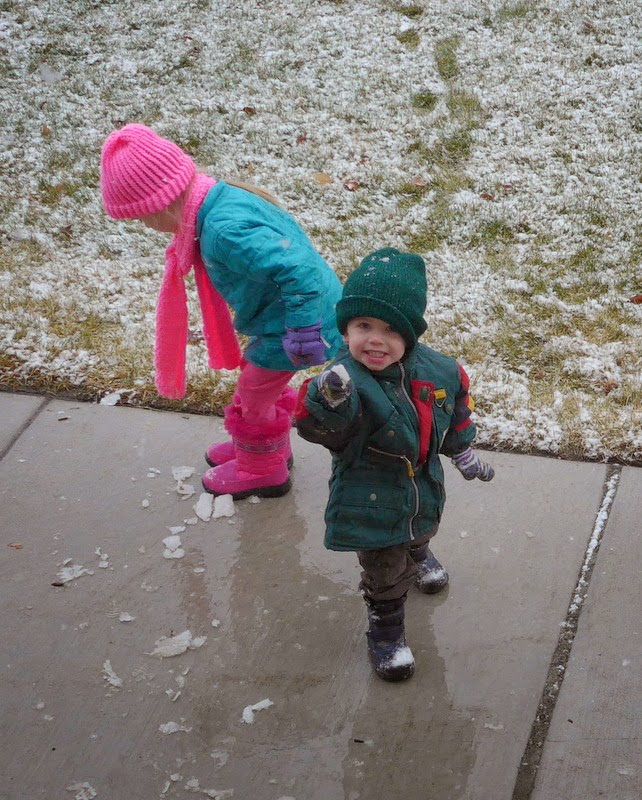 He had to wear socks on his hands instead of mittens because I put his winter things in one of the suitcases Andrew was bringing out and Grandma didn't have anything small enough for him to wear. He pulled them off to show me how cold his fingers were and then he wanted to come inside. 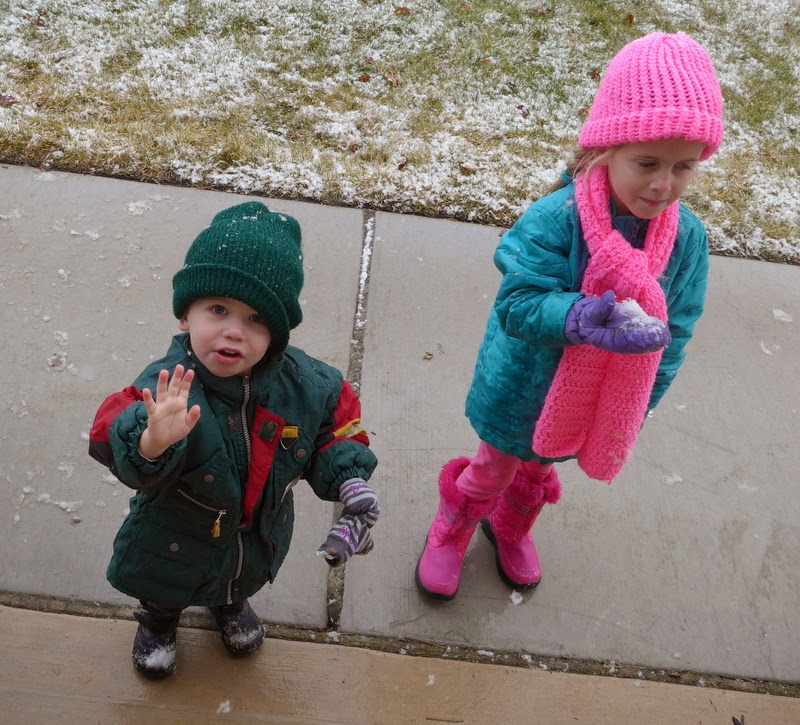 Miriam followed soon after, though she did stay outside for a little while longer.

The snow had all melted by the time Andrew and Rachel arrived. Rachel was a little disappointed but we assured her that with three weeks to go it was bound to snow again at least once (and if it didn't we can make a quick trip up a mountain--the kids were so flabbergasted by how huge the mountains are out here; Miriam said, "There's a mountain in front of us and a mountain behind us and a mountain on both sides of us!" We're completely walled in. Benjamin loves the "mounties." And they think it's really weird when they get all covered in clouds and you can't see them anymore (and then when the clouds disappear there's more snow on the mountains--magic!)).

Almost as soon as Andrew arrived he had to leave for BYU. He still works for the Maxwell Institute doing layout for their print books, but the bosses have changed since he was hired and he no longer really knew who he was working for. They invited him out to dessert and Thursday afternoon was the only time they could do it since everyone was leaving for the holidays.

I'm quite sure Benjamin and I took a nap while he was out. Rachel and Miriam played together in the basement alone (Grandma had to play the organ at the temple and Grandpa was working). They didn't even fight (at least not loudly enough to wake me up)!

Auntie Sarah, Uncle Jacob, and Auntie Shayla stopped by for a visit after they were finished with work. It was fun to see them again. Rachel's remembering everything quite well (people and places) but everything's new to Benjamin and Miriam so they were a bit shy (but they're warming up to things).
Posted by Nancy at 1:57 AM