On Saturday morning we returned to the Bean Museum for another go. Benjamin recognized it right away, which I thought was rather impressive for a two-year-old who'd only been there once (granted it was just the day before). "Bean moo-see-um!" he shouted. "Me 'ike a Bean moo-see-um!"

This time Rachel and Uncle David came along. I didn't take many pictures, but I did take a few of the kids goofing around in the play area. 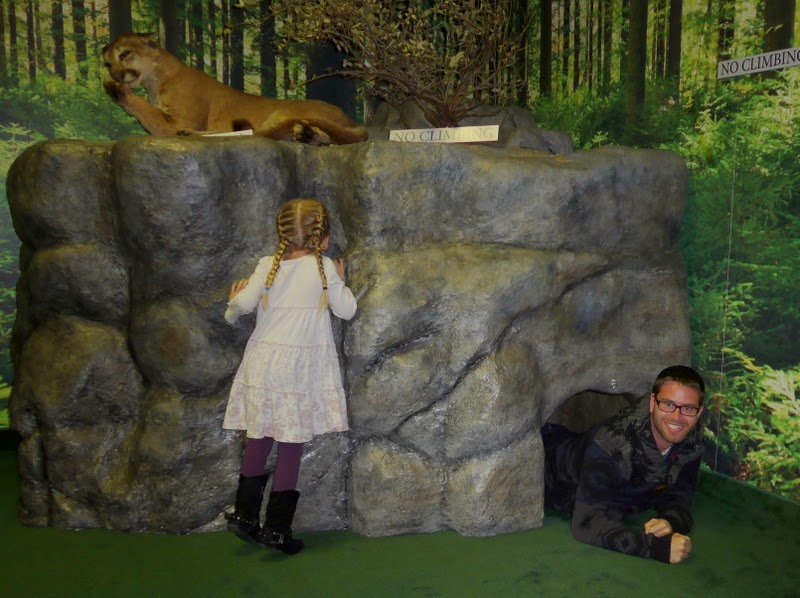 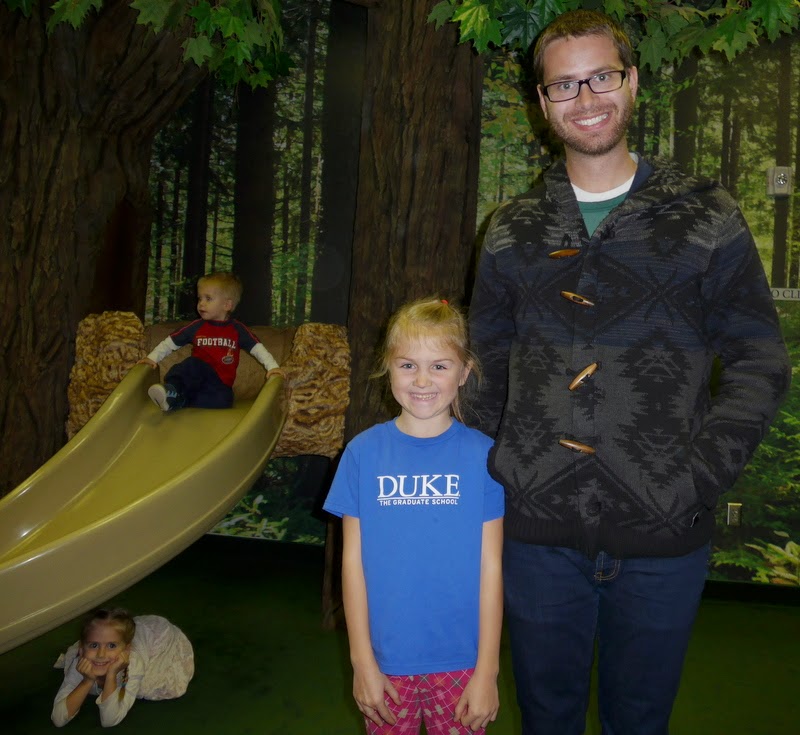 We went to the "live animal show" in the auditorium and it was pretty enjoyable, though only 50% of the animals they brought out for us to admire were alive. We expected a little more from a live animal show. Still, we had fun.

Here's Miriam holding a skunk (not one of the live animals, mind you (it's stuffed)): 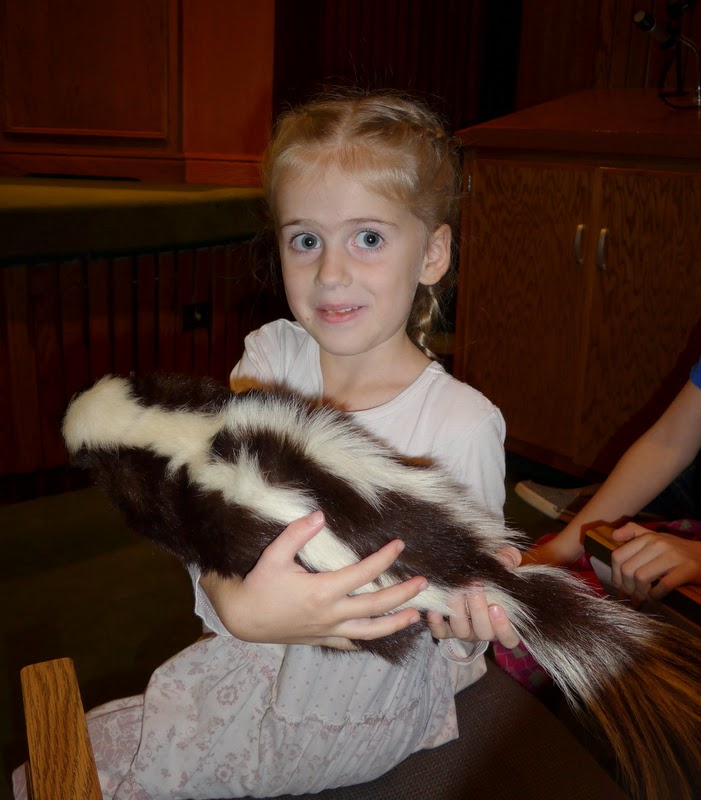 There was a toddler in the row behind us who kept coming up to our row. Benjamin was very interested in him. He kissed his cheek, patted his head, and then nearly poked his eyes out. The little boy was obviously a very experienced youngest child and quickly shut his eyes and then kept them closed for a few minutes until he was sure the coast was clear. When he decided to open them again he grabbed onto Andrew's leg and then glared at him for several minutes. We were all cracking up with laughter while this little baby was staring Andrew down. He did eventually return to his own family, once he'd determined that Andrew had been stared at long enough.

After we were finished at the Bean Museum we headed over to the Museum of Art to look at the new rainbow sculpture they have in the atrium. For years (and years) they've had this (hideous) mobile full of "symbols of Utah." That's gone now and there's a cool rainbow set up. Much, much nicer, in my opinion (apologies to whoever made the previous mobile thing).

We didn't stay long at the MOA though because we were really on our way to the library. Rachel wanted to see all the books, where Andrew and I used to work, where Naanii currently works. Uncle Patrick was actually at work so we wanted to visit him as well. And we needed to pick up some ketchup chips from my mom's office (which we forgot) and check out some books to read while we're here.

Patrick works in book repair. The kids were in awe with the number of books waiting to be repaired. Uncle Patrick showed them some of the equipment he uses (I have pictures of these but they're on my phone)--and even let Rachel work "the guillotine" (the giant paper cutter). He gave each of the kids a little pile of scrap paper and they were all excited for different reasons.

Rachel decided to use hers as bookmarks.
Benjamin decided his was money ("Unkit Patik gives me money!").
Miriam wished that hers could be turned into a little book.

Her wish was at Uncle Patrick's command. He used the ginormous stapler to turn her pile of papers into a book. She walked out of Book Repair as happy as a clam.

Our tour of the library complete, we decided to check out our books and head home. Uncle David said he wanted to head over to the bookstore for a minute so we said goodbye, checked out our books, and then headed out to the car.

By the time we walked to the MOA parking lot, David had discovered his wallet was missing. He'd raced to the MOA to see if he left it there and we ran into him as he was running to the front doors.

He came running out of the MOA while we were still buckling kids into the car. He didn't look particularly happy.

"Will you say a quick prayer for him?" my mom asked.

So I did. I prayed that he'd know where to look, that he'd find his wallet, and that everything would be in it.

As Uncle David got out of his car at the Bean Museum parking lot he reached his hand to his back pocket and found...his wallet!

He was greatly relieved that his wallet had been found (with everything in it, too) but knew everyone would make fun of him about where he'd found it. And we did. In his defense, it's a thin wallet and his pockets are fairly deep and he "never" puts his wallet in his back pocket. But still. It was hilarious. We've spent the whole week answering anyone who mentions, "Have you seen my...?" with "Have you checked your back pocket?"
Posted by Nancy at 11:01 PM