As we were making up New Year’s resolutions back in January, Rachel decided to make an audacious goal—read 365 books in 2014. She had just finished every book in the Magic Treehouse series and was determined read enough to be able to understand all seven Harry Potter books.

She totally smashed that goal.

Just for fun, we meticulously tracked her progress. Here’s how she did.

I set up a form on Google Drive where Rachel could type in the title, author, and number of pages in each book as she finished, as well as the date of completion. 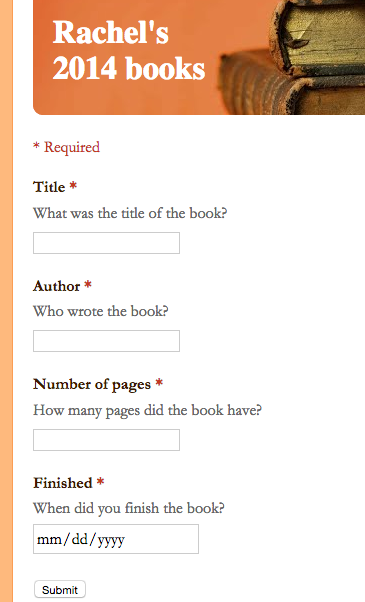 I put a shortcut to the form’s URL in the dock of our media computer (i.e. our fake TV and Netflix hub), and for the first few weeks, she religiously typed in each book as soon as she finished it. By February, however, she started to get behind, piling books up in the entertainment center, and by March, Nancy and I took over most of the data inputting duties. Rachel had also learned that typing books in slowly would let her stay up later, so we had to put an end to that.

But Nancy and I got lazy too. Because of this, the dates for each book are not entirely accurate—we couldn’t always remember exactly when she finished which book. This is sad, since I can’t look at any day-level data (which day of the week was her most prolific reading day, for example). Fortunately, the weeks are fairly accurate, so all the analysis is limited the week or month level.

To see if her reading skills improved over the year, I looked up the Lexile score for each of her books. This reading score is probably fraught with methodological issues, but since I know nothing about childhood development research, it seemed good enough (plus it feels more quantitative than saying that a book is at a 3rd–7th grade reading level). Since not every book she read had a Lexile score, I had to manually impute (make up) scores based on the grade level listed on Amazon and other similar books by similar authors. There fortunately is some correspondence between Lexile scores and grade level, which helps with interpretation. In general, the scores range from 300L to 1200L, with a range of possible values for each grade level. As a second-grader, Rachel should generally be reading stuff between 140L–500L.

One final caveat: this year is not over yet. As of today, Rachel has read 365 books, but I predict that she’ll read another 22 before the year is over. So consider this analysis incomplete :)

You can view the raw data to see all the books Rachel read. You can also see and download the code I used to analyze and graph her data. You can download the original PDF images here.

First, Rachel has read 68,584 pages so far this year, and on average, each book has been about 190 pages long. However, the median length has been 130 pages, which means there’s a big chunk of really long books pulling up her average. You can see this in the histogram below—there’s a clear peak around 100, but the distribution is skewed to the right with a long fat tail. It’s almost quadrimodal too—there are lots of books clustered around 100, 200, 300, and 400 pages. Her longest book was Harry Potter and the Order of the Phoenix at 870 pages. 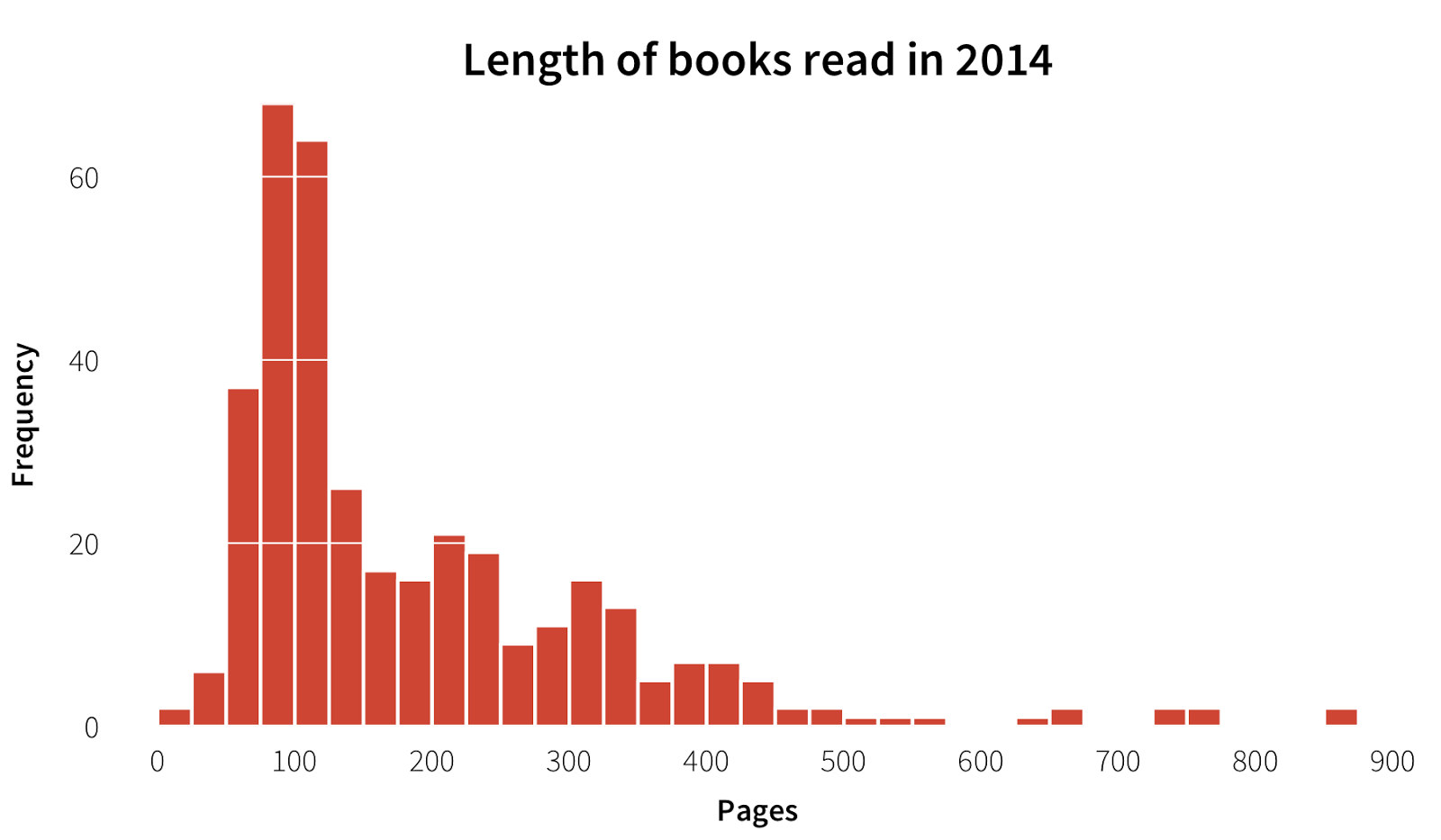 Rachel was definitely a fan of certain authors. She’d often stumble on a series at the library and insist on reading every possible book by that author. She even had a mini meltdown when she unexpectedly came to the end of the Children of the Lamp series.

You can see her most favorite authors this year in the plot below, which shows the number of times Rachel read a book by a given author. J. K. Rowling is the clear favorite, with Harry Potter and its spinoff books Tales of Beedle the Bard, Quidditch Through the Ages, and Fantastic Beasts and Where to Find Them. There are some other clear winners too: Nancy Krulik’s Katie Kazoo series, Adam Blade’s Beast Quest series, Megan McDonald’s Stink, the Little House series, Goosebumps, Narnia, and others. Rachel has recently fallen in love with anything written by Cornelia Funke. 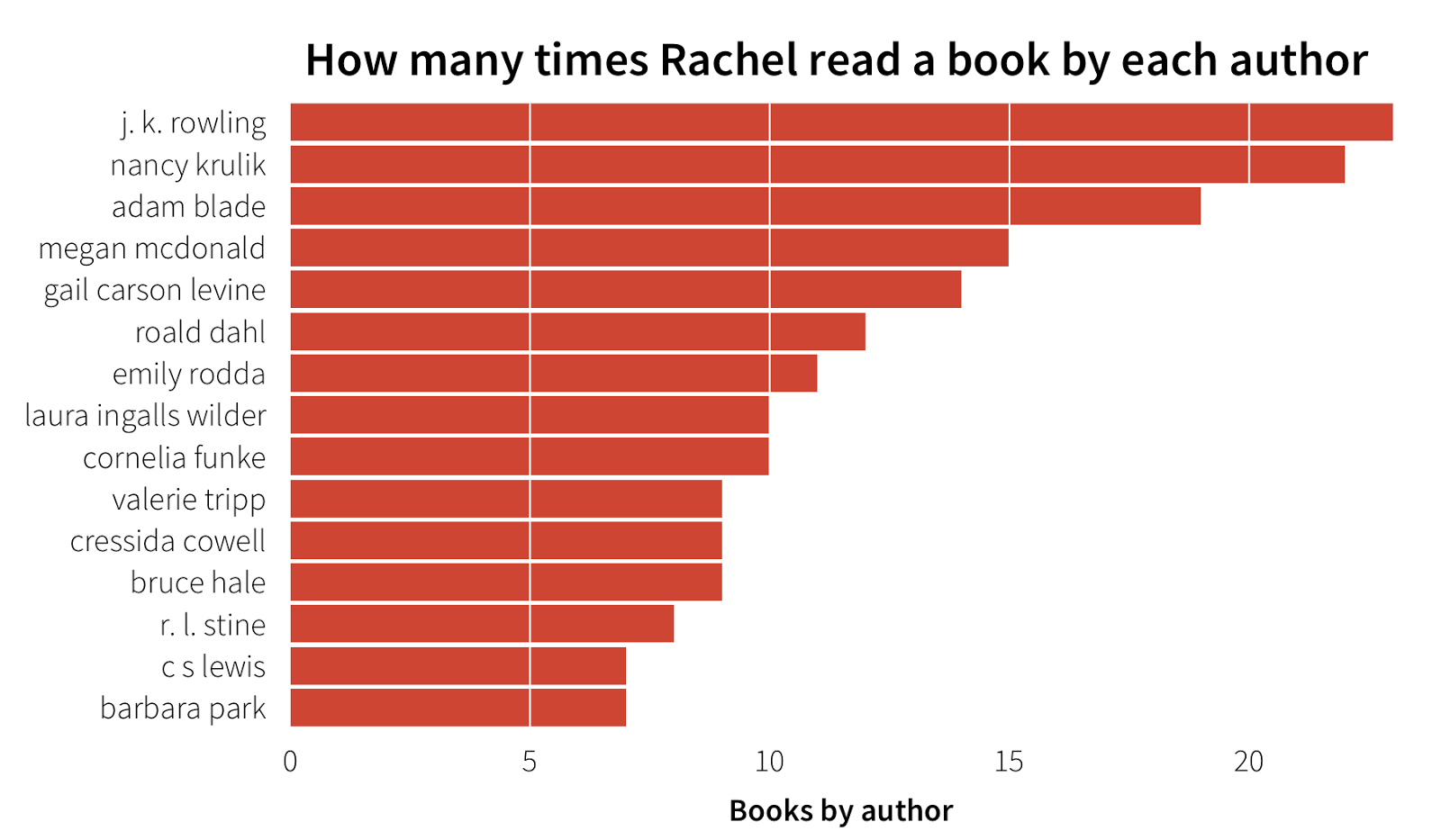 She also re-read at least 23 books during the year, as seen in the kind-of-boring graph below (some spelling differences might be hiding other books—like how only five of the Harry Potter books are listed). 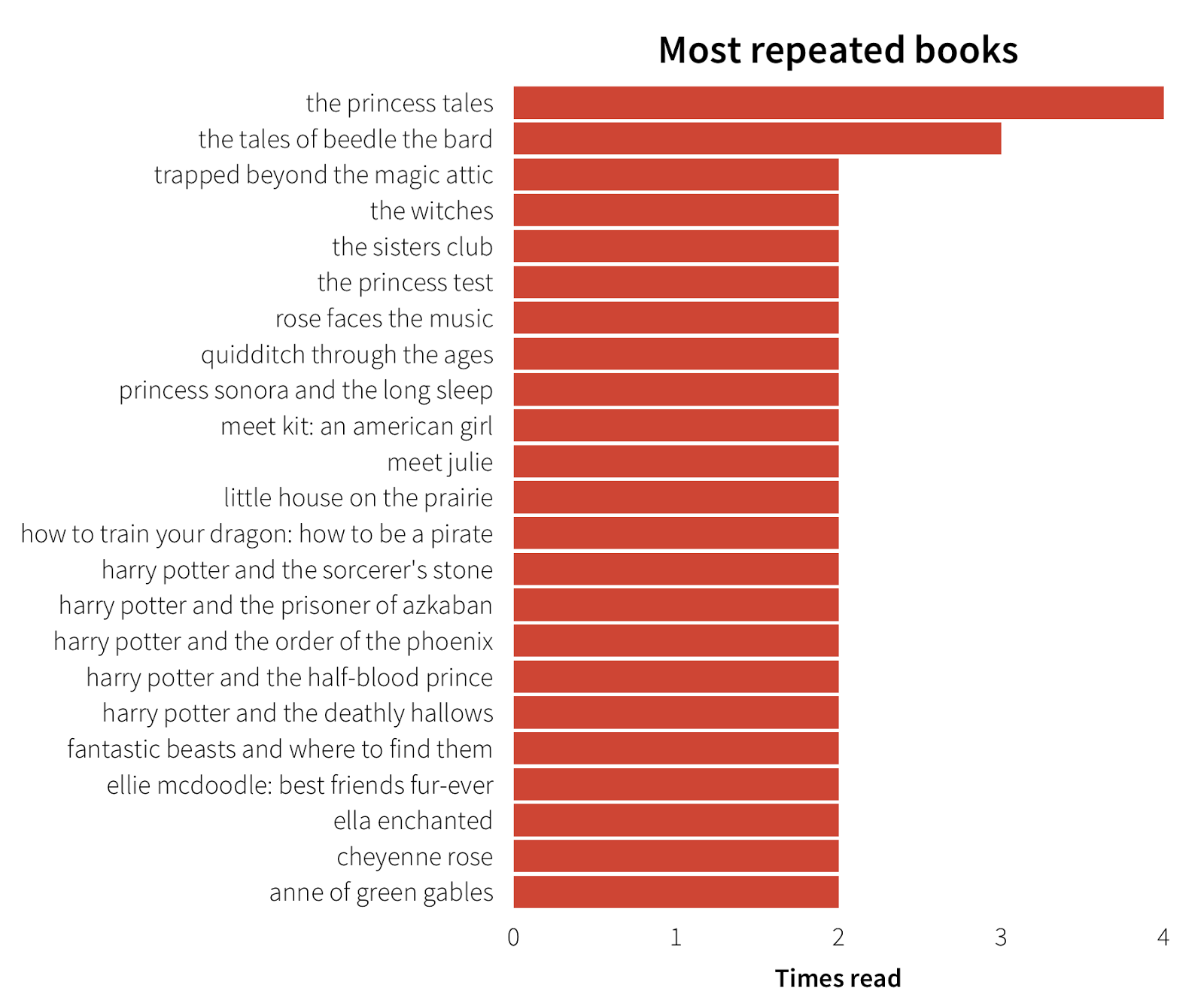 Rachel’s average Lexile score (again, with whatever caveats it inherently has) was about 700, which falls in the middle of the 5th grade interquartile range (IQR; where the middle 50% of values lie). This average score is pulled in different directions. Tales of Beedle the Bard is the most difficult book, with a score of 1290 (for reference, The Hobbit is 1000 and Harry Potter and the Deathly Hallows is 980, while Magic Treehouse books tend to be around 350–400). That seems excessively high, but meh. As seen in the plot, Rachel read a lot of 800+ books, but also a lot of <400 books, like the BabyMouse series (with a score of 300), which she adores. 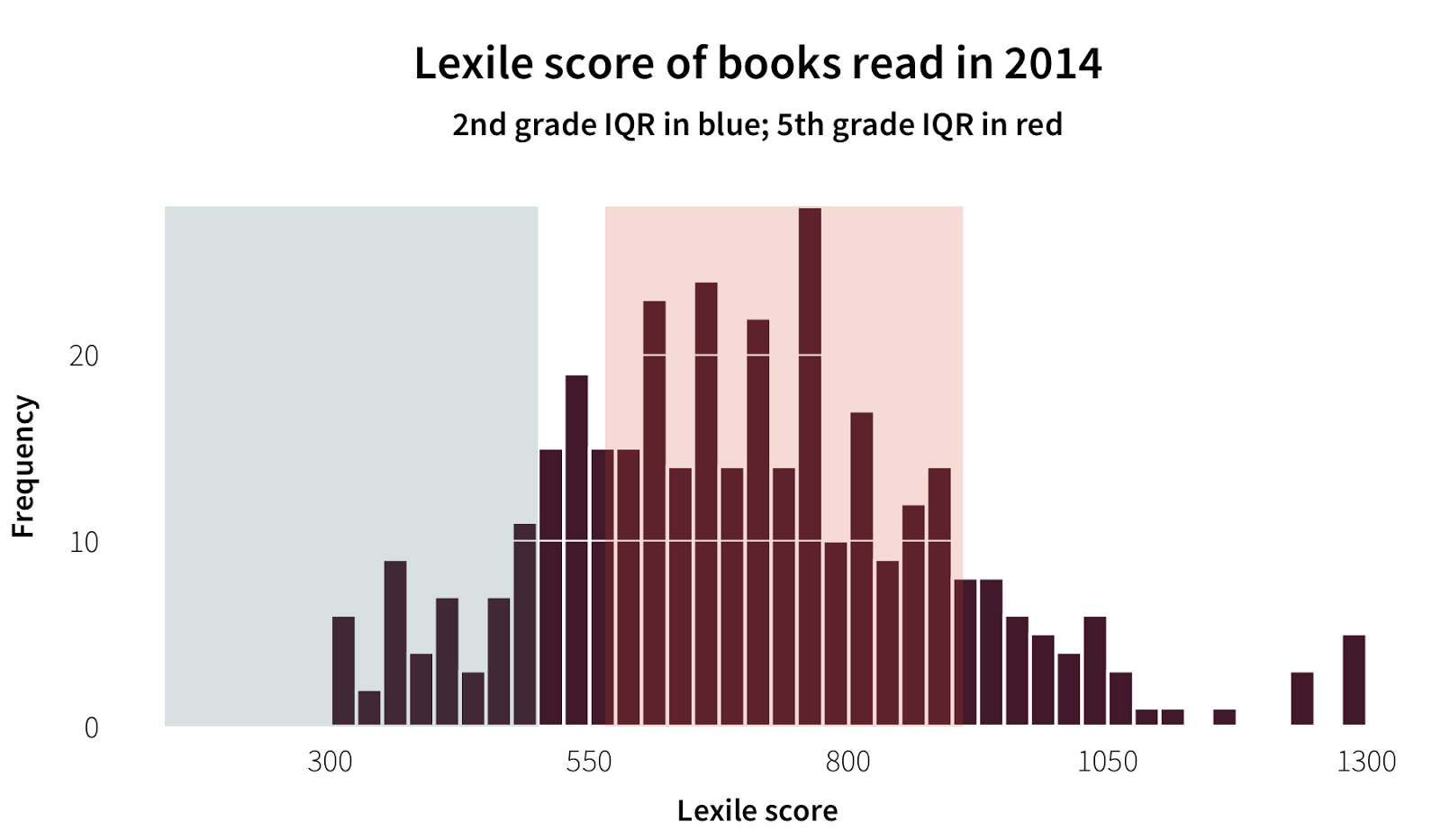 Just as a sanity check, books do tend to get harder as they get longer (though you can see clusters of really hard and really easy short books). 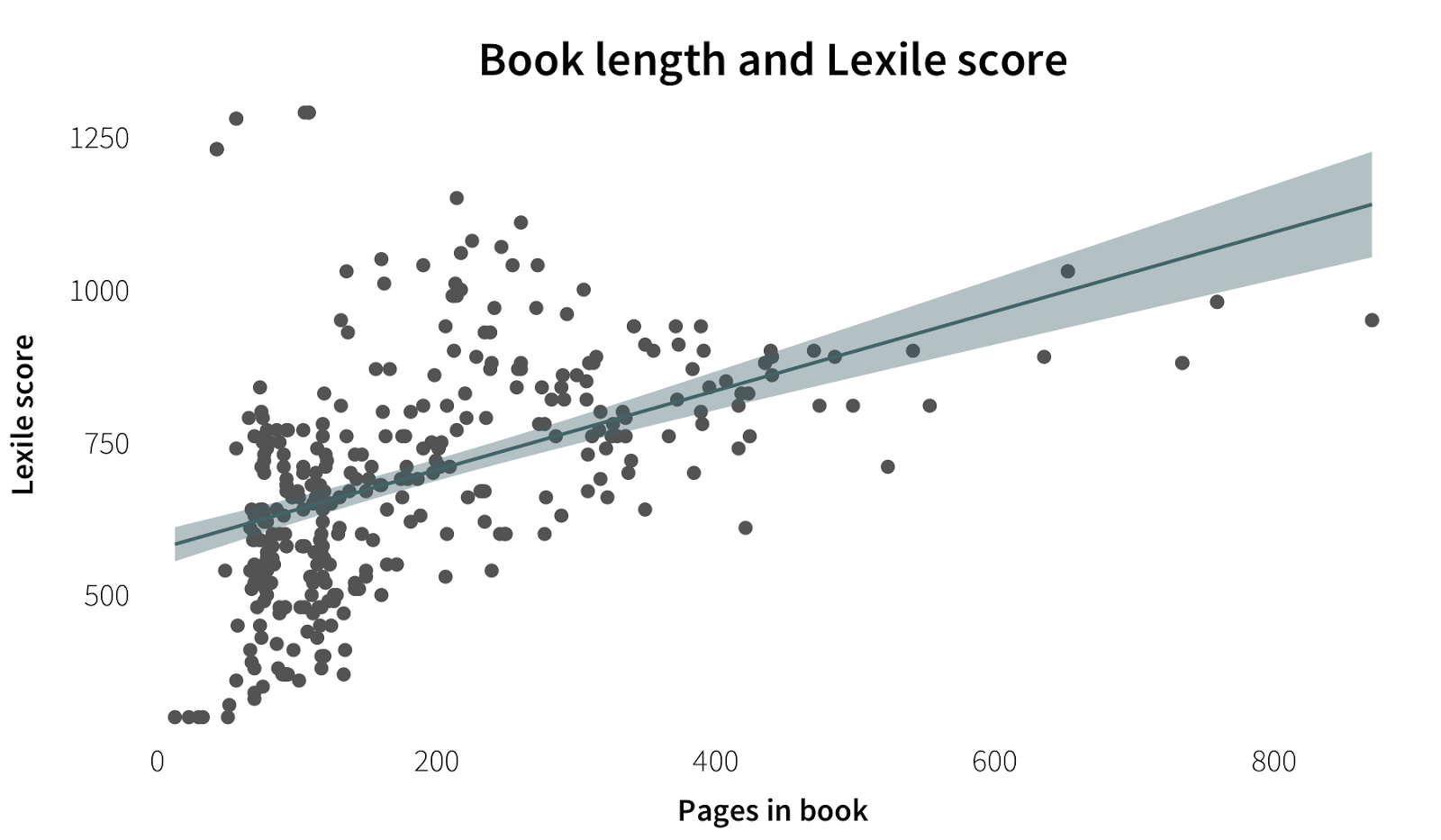 More interesting than these single variables, however, is looking at how Rachel’s reading habits changed over time. For example, except during summer and fall break, she read about 6,000 pages per month, regardless of the actual number of books. She definitely read a lot more during her breaks, and apparently did some sort of marathon in October (48 books and 8,605 pages!) 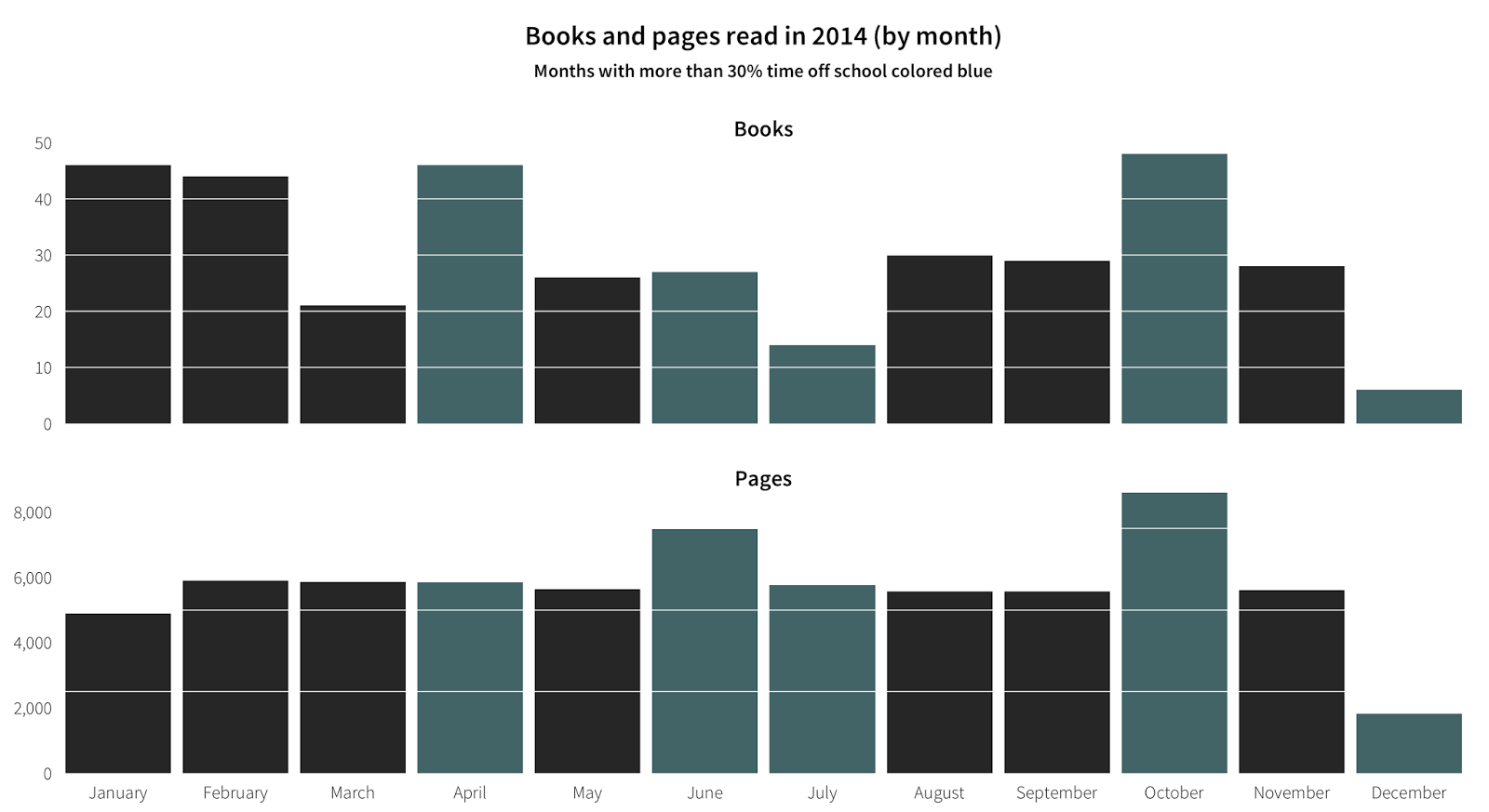 Looking at weekly data, you can see better when she first read the Harry Potter series (see that huge drop in books in the middle of March?). 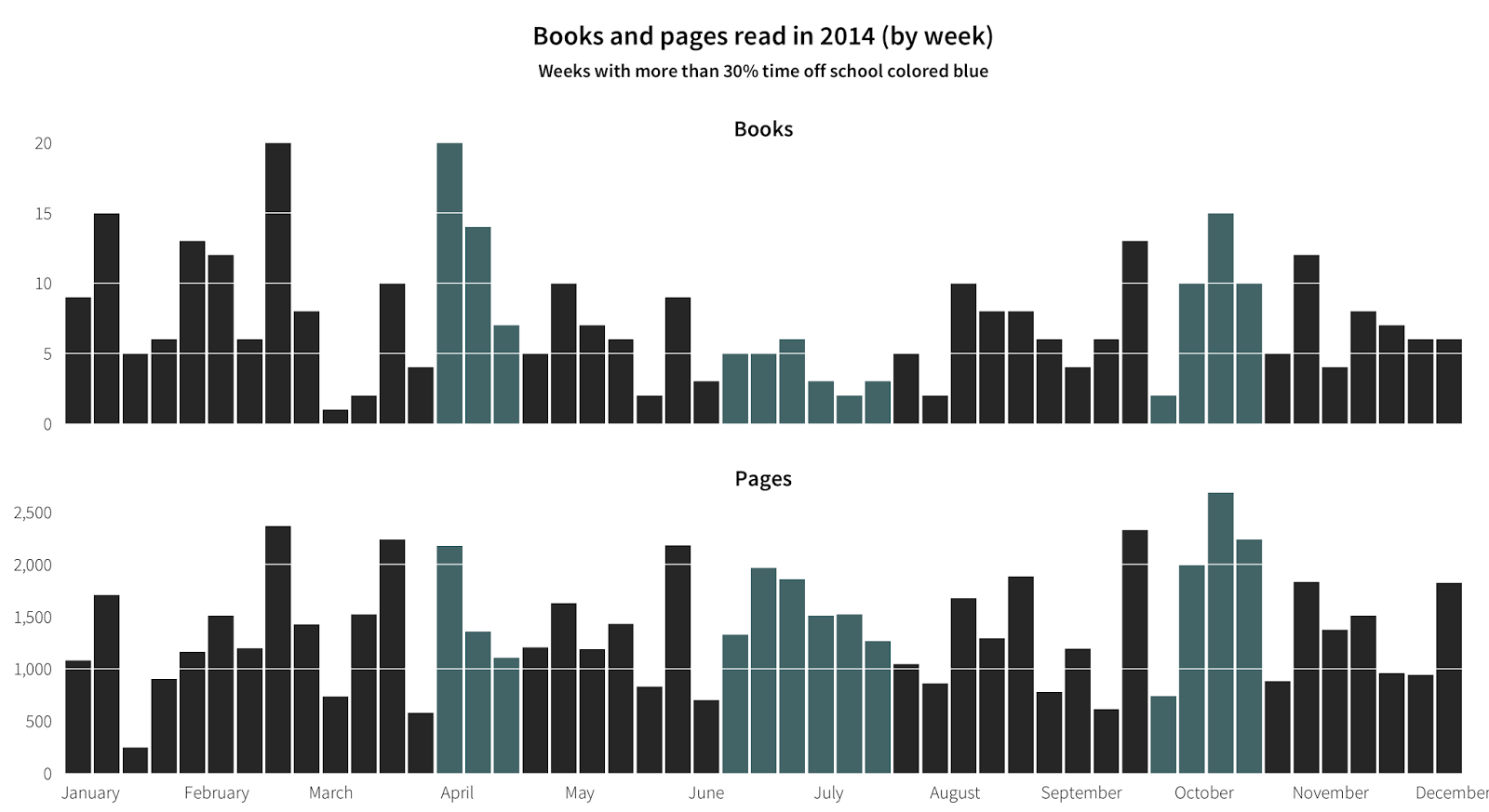 Again, it would be cool to see which days of the week she read the most (probably weekends), but we were lazy and lost that data.

Using a scatterplot shows even more detail about her reading patterns this year. 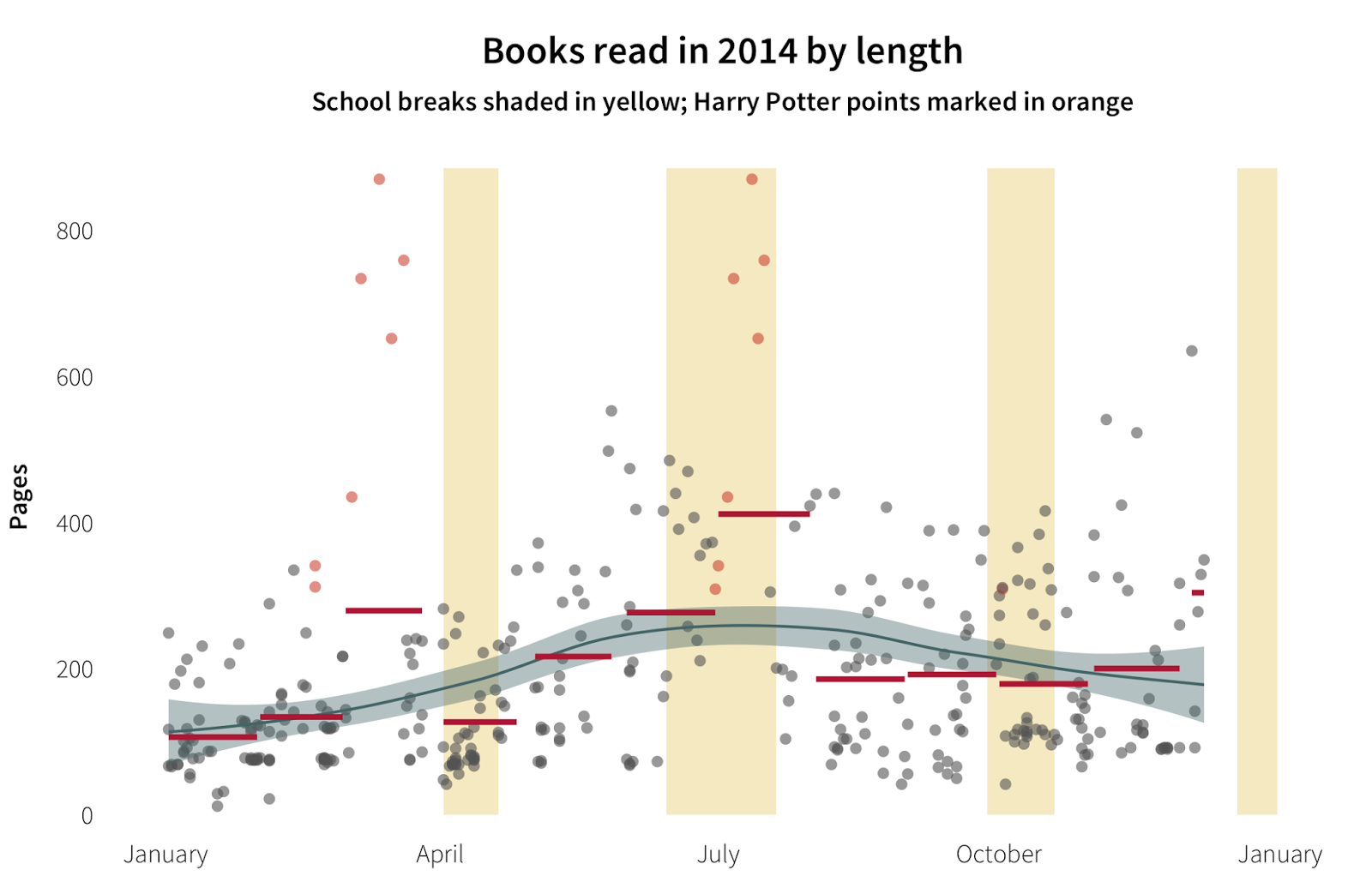 During the first half of the year (from January to April, with the obvious exception of March), she tended to read a lot of short books. In May she began to branch out to longer books (Little House, How to Train Your Dragon, and fantasy like Redwall and Elf Realm). She read a bunch of really long books in June and July during summer break, but started reading shorter books again once school started (though longer and more difficult than what she was reading at the beginning of the year (e.g. average book length was 120ish pages in January and February, but 200 during the fall)).

Her Lexile score also had a similar parabolic trend (not surprising, since the two measures are correlated). I highlighted the books with imputed scores to see if I was too generous in making up scores. Pretty much every imputation is way below the predicted curve, which means I probably underestimated the scores. Oh well. 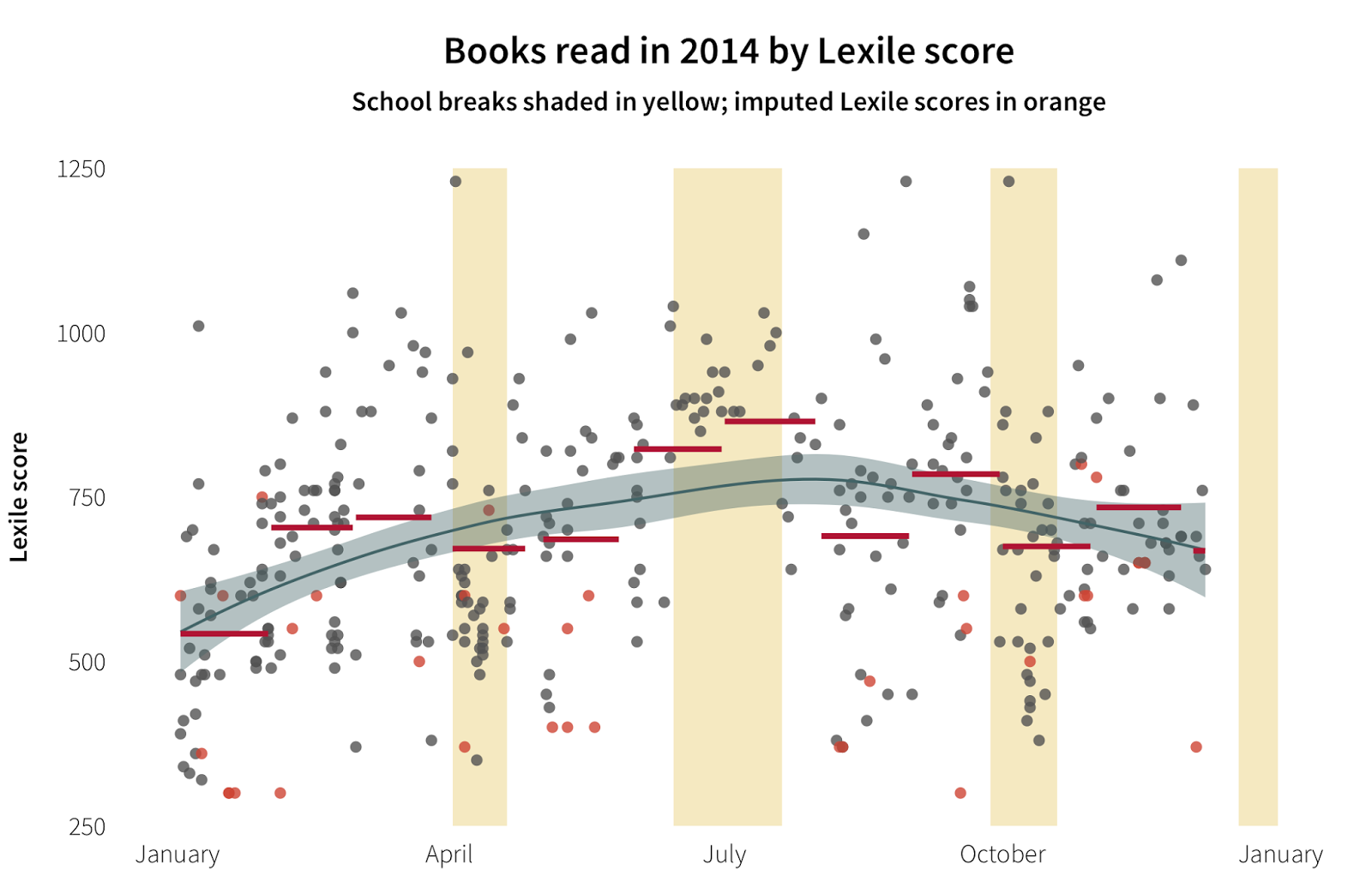 Finally, not only were we impressed that Rachel completed her big goal, she was ahead of the game the whole year (sometimes by three weeks or more). The figure below shows the cumulative number of books she read during the year. The blue reference line shows what would have happened had she read exactly one book per day, and the dotted line shows her average trend. 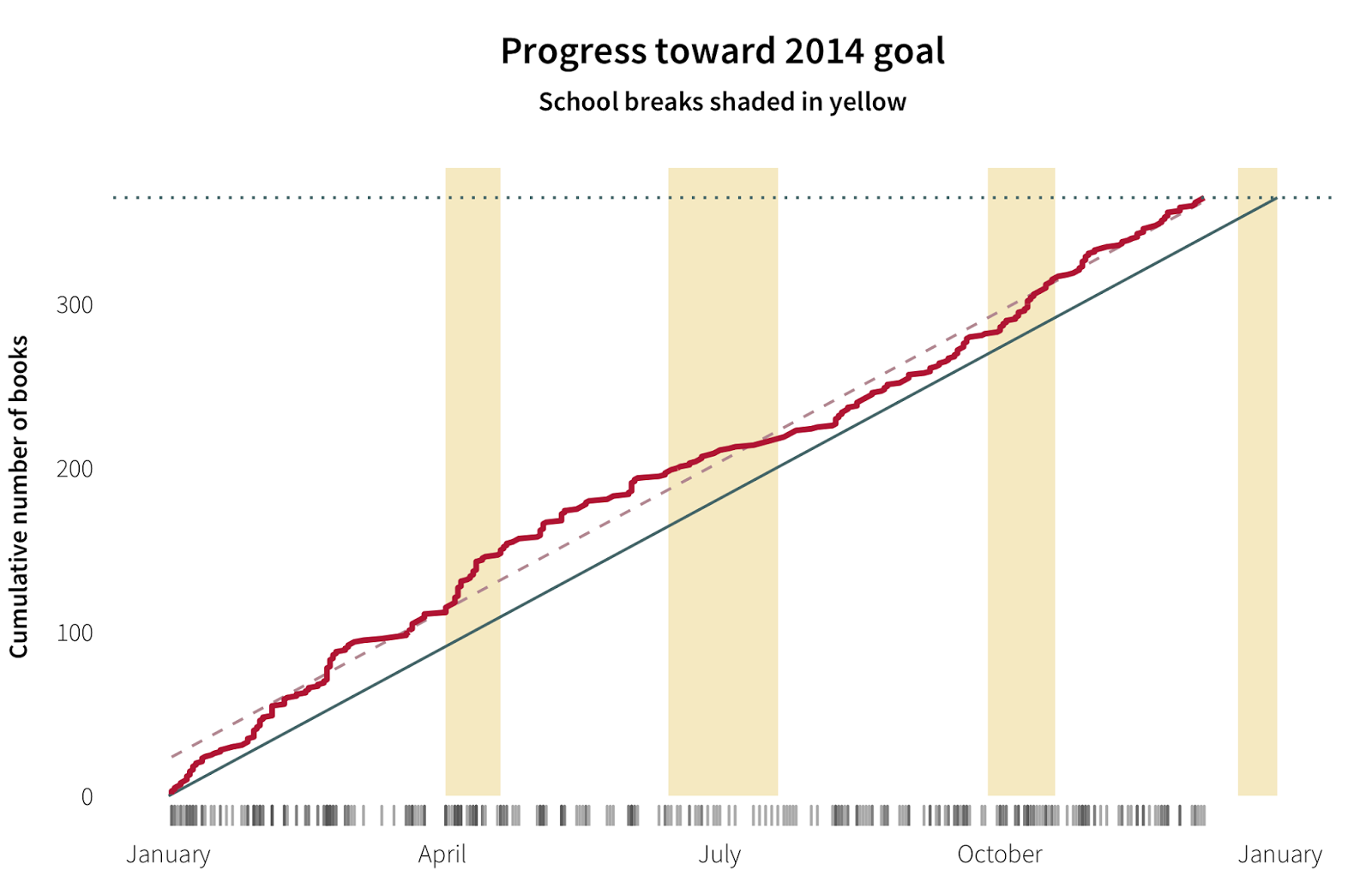 In general, Rachel was about 23 days ahead of her goal. This means that she’ll probably end up reading 387 books by December 31 (though traveling to Utah with minimal access to a library might put a crimp on that).

In 2014, Rachel (so far) has read 365 books that, in general, have been 190ish pages long and written at a 5th grade reading level. She worked insanely hard this year to meet this goal and we’re so impressed and proud that she did it.

Who knows what she’ll try next year!
Posted by Andrew at 12:12 AM