This morning Zoë wore a brand new dress to church (after trying on a couple other brand new dresses that were still too large). She's a regular little clothes horse—and who'd have figured it, with her being the fourth child.


Truthfully, I think she's got the most new clothes in her wardrobe out of any of the girls so far. Rachel's dresser was stuffed to overflowing with hand-me-downs from my sister's twins, though she did have a few new-to-her things. Miriam wore Rachel's hand-me-downs, mostly, with a few new-to-her things thrown in for good measure. When Benjamin came along and we were getting ready to move I did a big purge of baby girl clothes—whittled our collection down to just one box (from birth to a year). So we weren't entirely starting over from scratch with Zoë anyway, but a lot of what we kept was...well-used. 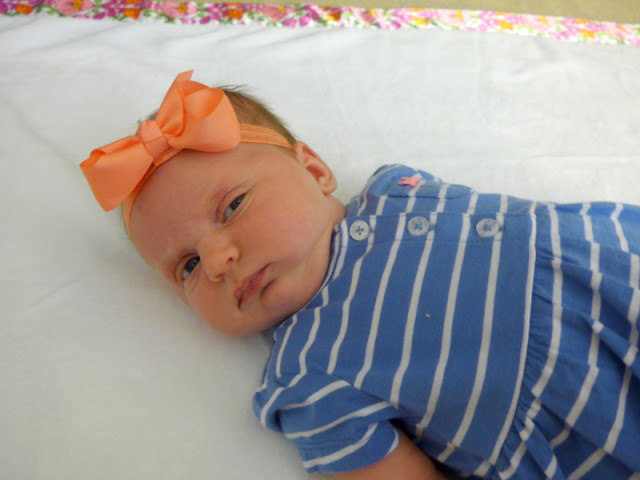 She walked in carrying it and then stopped by the food table to check out the spread: cookies and cupcakes and sandwiches.

Sister Wood said, "Oh, you brought a lasagna! I think we have enough food out right now but perhaps we can send that home with Nancy."

Sister Palmer said, "This is for Nancy!"

It was kind of an awkward (and hilarious) moment.

And the lasagna made a wonderful supper that evening. 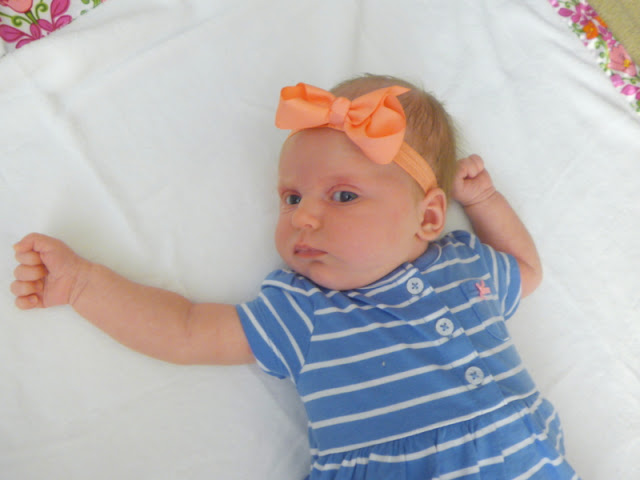 Zoë looked beautiful in her new dress (this one's from Sister Wood) and it was kind of fun to dress her in something untouched by memories. Not that memories are bad, but it's nice to just put Zoë in something and see Zoë, rather than be thinking of that one time one of her sisters fill-in-the-blank here. Not that I have many memories of her sisters doing anything particular at this age (aside from the usual eat/poop/sleep/scream) but, you know.

Right now, for example, Zoë is wearing the nightie Miriam was wearing for her passport pictures. And I can't help but expect to see this stunned little face when I look down at her:

Incidentally, Miriam wasn't nearly as bald as a newborn as I remember her being. I guess she went bald later on in life, before her hair started growing fast and furious (there's just no stopping it now).

Also, dear passport people: requiring photos for infants is the most ridiculous idea ever. First the photos are nearly impossible to take. Second, Miriam's passport just recently expired. Want to know what she looks like now as a big whopping five-year-old? Not remotely like her passport picture, that's what.

Here she is sporting the shield and sword she made this afternoon with...whatever these toys are called. The shield has a handle and everything. She was quite proud of it. 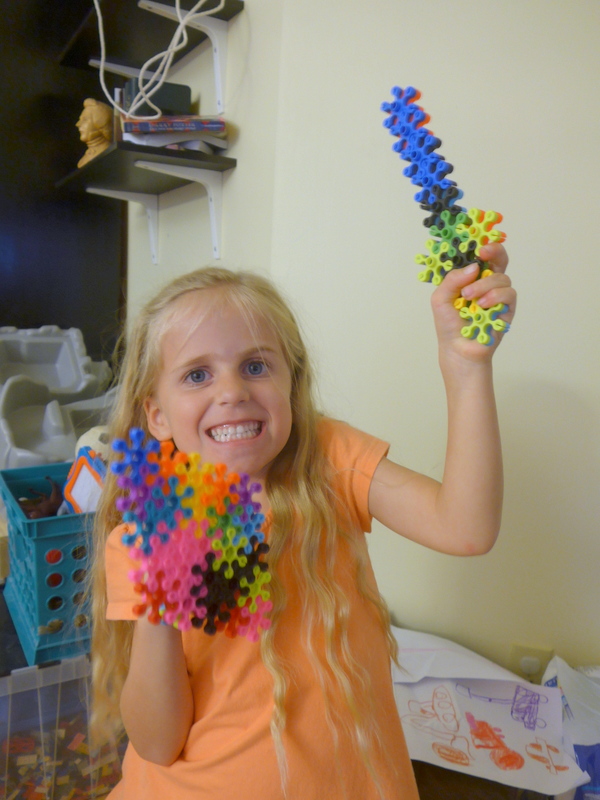 I'll write more about the shower later, perhaps, when I get pictures from Sister Wood. I will say, though, that it was fun to attend a shower with people that I've known so well for so long. We've been here for nearly three years—the longest we've lived  anywhere. Most of the guests were primary workers, since that's where Sister Wood and I spent most of our time. The Woods moved into the ward the same time we did and both Sister Wood and I were put into primary immediately; after I was released from the presidency I was put back into the primary as Sister Wood's co-teacher; now we're compassionate service leaders together in Relief Society. I have a three-year history of working with this wonderful lady.

It was a new experience for me to be in a room full of women I'd known for so long, and realizing that I'm lucky enough to get to stick around for a few years more. I thought "putting down roots" for five years was going to be difficult, but really time is going fast, and it's nice to share a bit of history with people.

(I get that three years isn't very long but at this point in our lives it's long for us).

And, just because I took it this evening, here's a picture of wonderful Grandma: 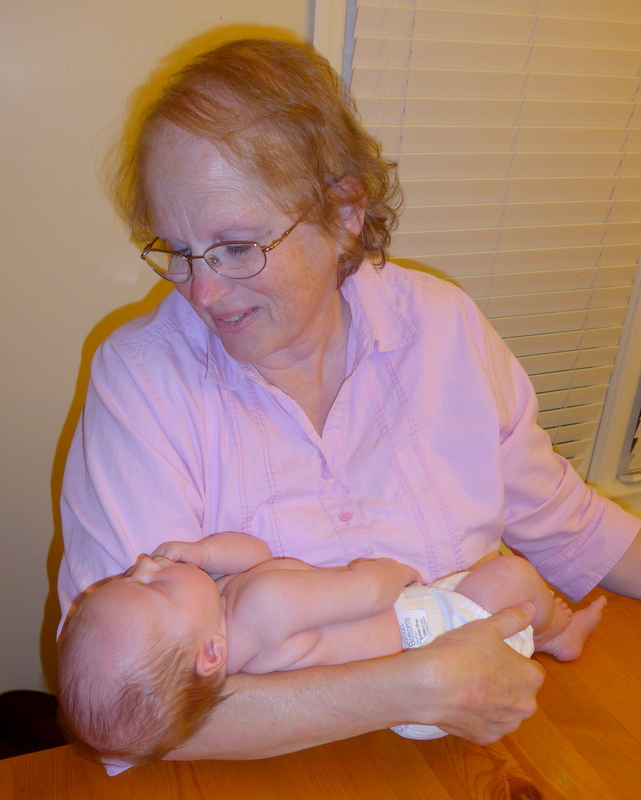 We couldn't have made it through sacrament meeting (or out the door, for that matter) without her!

Look at those chubby little back rolls! I can't believe how fast she's putting on weight (although I also can because my milk is...effective). I'm sure she's going to be close to eleven pounds when I take her in for her one month check up this week (one month already!), but it could be worse...

My friend Michelle (of the Gillespie clan) had her fourth child on Friday—her third boy—and he tipped the scales at a whopping 11.06 pounds. So there's that.

He's perfectly healthy, too. Their family just churns 'em out large. Phillip (Michelle's brother) was around 11.5 pounds at birth. Now he's taller than his father and all his brothers (it took until now to figure that out because he's the youngest by a significant number of years so he had quite a bit of catching up to do before he could pass his brothers)—must've been that robust start he got at life.