Yesterday was a pretty rough day around here. Poor Grandma has had a sore back (it was sore even before she came out to help us) and it just kept getting more and more painful for her to do anything. By yesterday afternoon she couldn't do anything, practically, and the pain started localizing around her kidneys.

Eventually she decided she needed to go into the ER for a scan, so we loaded up the kids into the van and headed off to the ER. The kids are always excited to drive past the hospital where Zoë was born and what's even more exciting is it's on the way to Pelican's! Benjamin was sure that that's where we were headed (because Grandma was just fine—obviously).

He kept saying, "Grandma, us can go to Peck-ee-uns! And us can get snow cones and count cars. I will count the red cars and you can count the blue ones!"

It took me a while to figure out what he was talking about...but when I finally did it made me smile. We'd watched the movie Up on the way home from the beach last week. He was quoting Russell:


And afterwards we'd go get ice cream at Fentons. I always get chocolate and he gets butter-brickle. Then we'd sit on this one curb, right outside, and I'll count all the blue cars and he counts all the red ones, and whoever gets the most, wins. I like that curb.

He's very much into mimicking story lines lately, pretending that he's actually living them. Today he found a wand during scripture study and put a spell on himself to make himself "big, big, bigger than the whole house so that [he] doesn't even fit!"

The kids watched Alice in Wonderland this afternoon.

Anyway, we dropped Grandma off at the ER (not as callous as it sounds—even Grandpa's done it before) and headed home for my first afternoon flying solo with all four kids (since Grandma came (I did that one week without having either Uncle David or Andrew home and it was rough)).

He was looking at plane tickets to come out and rescue us all because Grandma's kidney stones never pass on their own. She always has to get them "blasted" and then there's recovery time and so forth.

"You'll be stuck with four kids, no husband, and an incapacitated mother-in-law," Grandpa said. "So I've been looking at plane tickets. I can work from wherever, so I'll just fly out there...and break my leg so you'll have to take care of me, too!"

Fortunately, that didn't have to happen. It's "just" a kidney infection not a kidney stone, so they sent her home with antibiotics and pain medicine, and Grandma's feeling better (though not great) today.

We spent the afternoon quietly admiring Zoë on her new play mat (yes, Andrew, I picked up more baby hud (but I couldn't resist when someone was giving this away...because I gave Benjamin's little play gym away to Kim Welling when he was finished with it so obviously we needed a new one)).

Apparently the pattern is called "vintage boy." I'm assuming this is because it's not plastered with pink and purple? My little girl looked just fine on it...though admittedly she is wearing a hand-me-down shirt of Benjamin's, so... 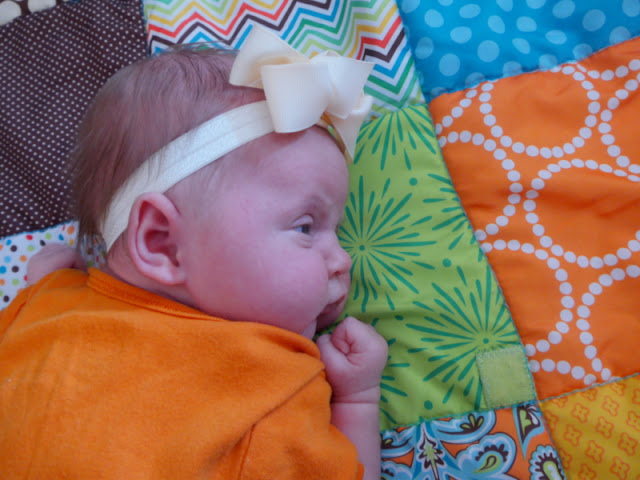 I had to look up information on it because I couldn't get the darn thing put together right. But we did eventually figure it out. Zoë's not very interested in yet. I'm not sure if that's because we're missing half the dangly toys for the gym part or if it's because she's still always half asleep (just kidding: I'm sure it's the latter). 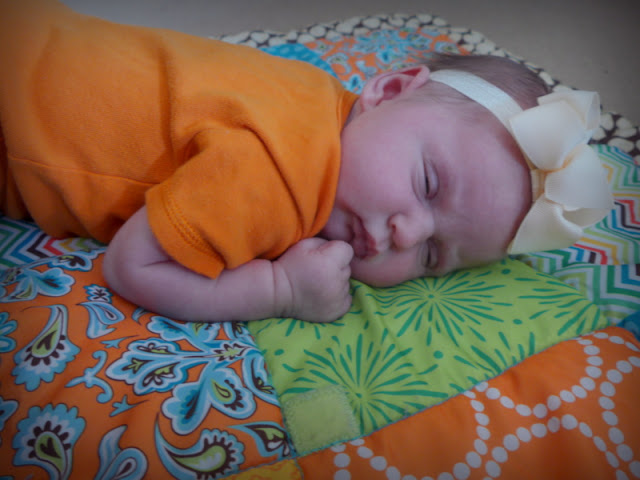 Grandma texted saying we could come get her at 9:18 PM, which was interesting timing because at 9:06 I texted Andrew to say, "AND a severe thunderstorm warning," meaning, "on top of everything else...now this."

I had a babysitter lined up to come stay with my sleeping children, but instead of sleeping they were either crying (the girls) or yelling, "THUNDER! Be quiet! THUNDER! Listen to me!" (Benjamin, obviously). So I decided to cancel on the babysitter and just take all the kids with me. I ended up being rather glad I did because I needed the company, even if it was just so I could chant, "Calm down. Everything's fine," and not feel like I was talking to myself (I was totally talking to myself though (and the kids (but mostly myself))).

That severe thunder storm we were warned about? The National Weather Service wasn't joking around. It hit us about halfway to the hospital and it hit us hard.

The hospital is only a ten minute drive from our house and the girls counted over 100 flashes of lightning. Granted, it ended up taking us longer than ten minutes to drive to the hospital because it was pouring rain (we also had a flash flood warning—because so much rain!ˆ). I could hardly see with the wipers going full speed and the gutters were completely flooded.

I was definitely white-knuckling the steering wheel when I pulled up to pick up Grandma.

Benjamin had fallen asleep, but the girls were in the backseat completely freaked out by the storm.

Grandma waded through puddles to climb in and we were off through the storm again. It was crazy but soon subsided. We made it home, assured the kids that the worst was over, and started putting them to bed.

Alas, we totally (and inadvertently) lied to them! The worst wasn't over. The worst just hadn't made it over our neighbourhood yet. Soon we were once again surrounded by thunder and lightning and buckets of rain and the kids were all screaming and crying in their beds.

Eventually things settled down, but it was certainly not a scenario I'd like to repeat!

Today was a little (okay, a lot) calmer. Grandma took the kids swimming in the morning (I hadn't meant her to—the kids saw the neighbour kids heading to the pool and wanted to go so I suggested that Grandma drop us off on the way to the pharmacy and I'd just sit on the side and watch the kids (knowing that our neighbours were there to keep an eye on things, too) but the next thing I knew Grandma was making plans to go to the pool herself).

Then we had a quiet afternoon. Grandma took a nap, Zoë and I took a nap, and the big kids played and watched a movie. It was just a quiet, quiet day. 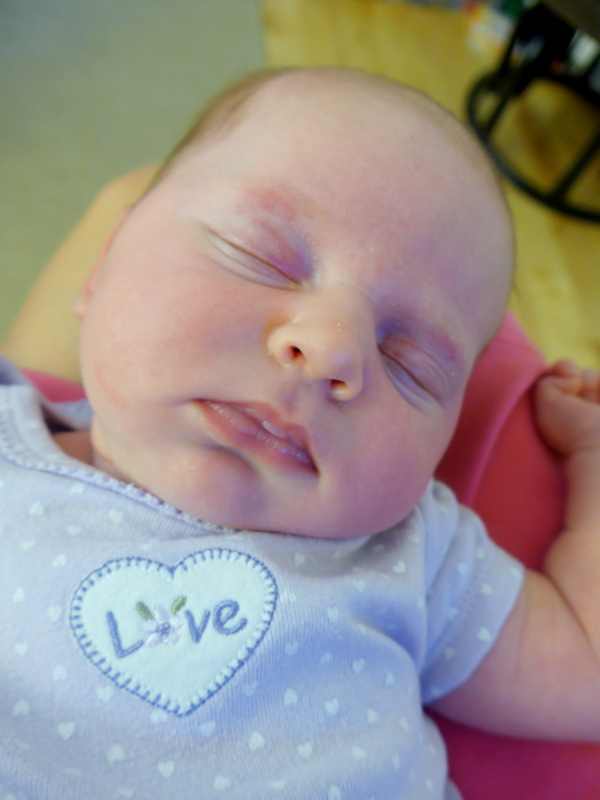 Here's Grandma cuddling Zoë (she even got a little smile from her): 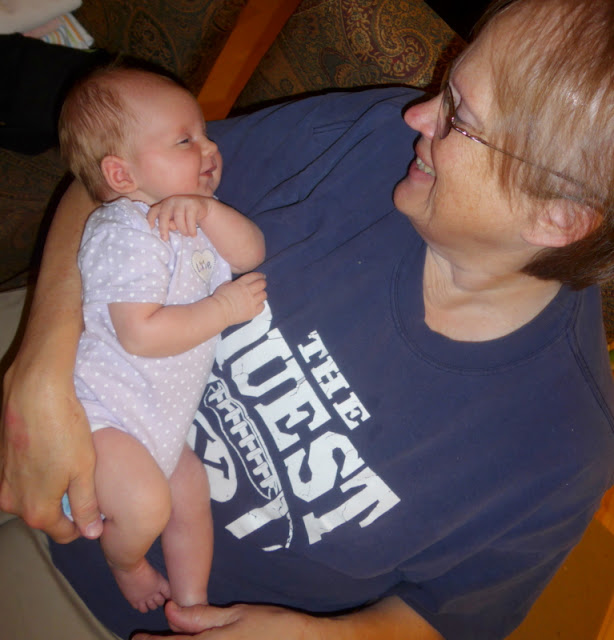