There's nothing quite like having a newborn baby to make your newly minted three-year-old suddenly seem ginormous. This, of course, is comparatively speaking because Benjamin's still pretty small for his age. But look at how huge he is next to Zoë! 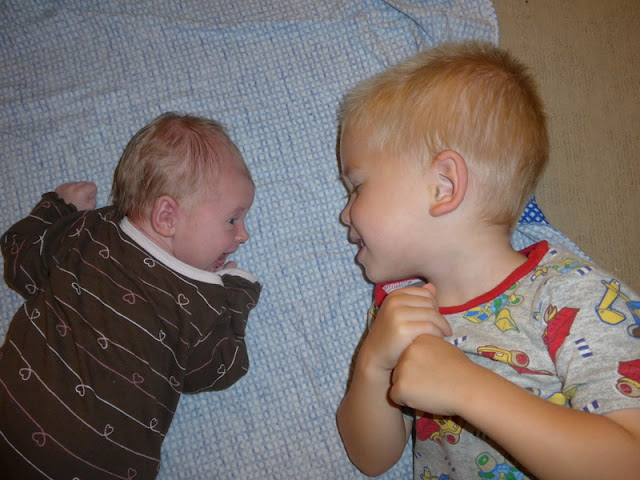 As I held Zoë in the hospital—so tiny and fragile—I kept trying to imagine having a baby a couple of pounds smaller. It was hard to imagine...and yet that's how Benjamin started out. When we finally brought him home from the hospital he was still smaller than any of the girls were when they were born! And now he seems huge!

My friend Nadia, who's son also will turn three this year and who was born with a heart defect which landed him in the NICU for a long time, shared a post today called "The 3 Words I Want to Tell Every Mother Who Can’t Hold Her Child." It was a beautiful read for this momma on this happy/harrowing anniversary. Memories of Benjamin are getting happier by the year so those feelings of anxiety aren't so easily dredged up anymore.

Andrew's noticed that I'm not "crazy," because after Benjamin was born I kind of was. PPD mixed with PTSD mixed with a cross-country move. I was a basket case. But I'm not now. Or at least, I'm not as much of a basket case. Shoot—I don't even have heart palpitations when I nurse Zoë. How I managed to nurse Benjamin for two years is beyond me because I'm pretty sure I had frequent (minor) anxiety attacks while nursing him (because eating and breathing at the same time was so hard for him for so long that I never quite got over the feeling that his life was at risk every time he ate).

He can certainly eat now though!

Here he is with Uncle David this morning. He called out to me (I was in the bedroom), "Mommy! I'm so tall! 'Cuz this guy's giving me shoulder ride!" 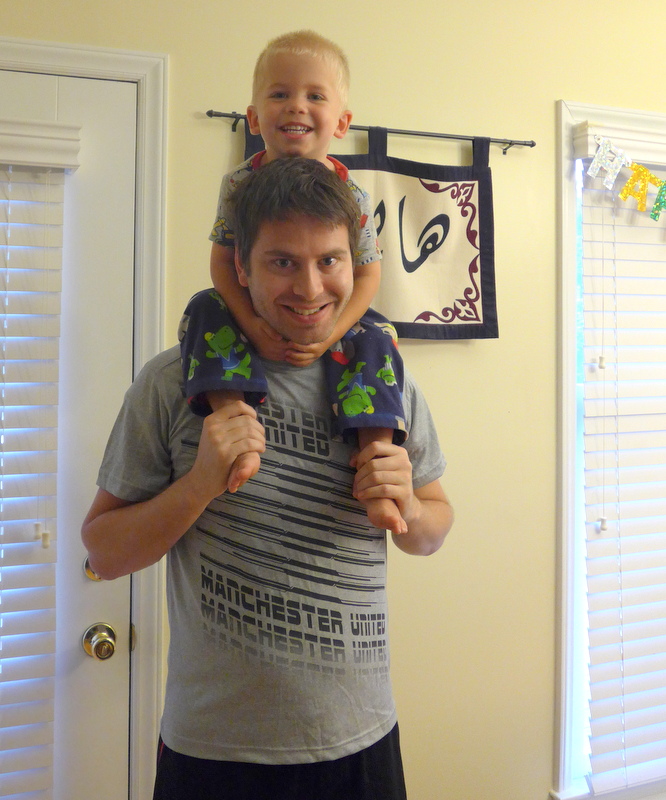 Miriam wrapped up a present for him yesterday and just couldn't wait to give it to him, so she gave it to him right after lunch. Inside was a stuffed panda (from my childhood) and a Lightning McQueen car (that Rachel got her first Christmas). It's the thought that counts. 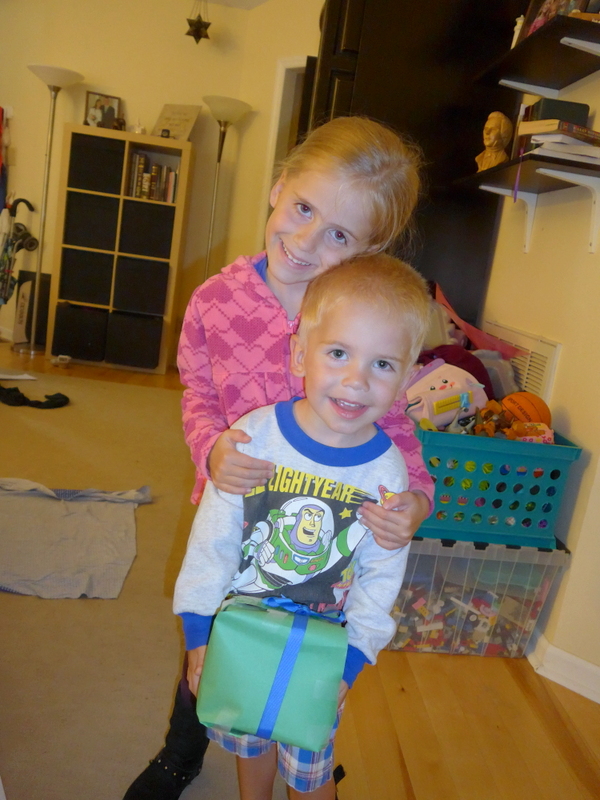 She kept telling him, "It's your birthday today!" and he kept saying, "No! My birthday is now!"

We went to the museum in the afternoon. It was nice to have Uncle David there. I sent them off to see the dinosaurs on their own (that's all Benjamin really wanted to see) while I sat and rested. It was a rather wet day so we didn't stay outside long, but we did stop to play on the new playground. 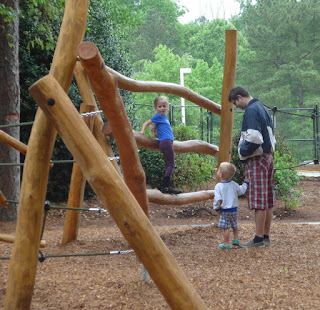 And when we got home Zoë and I took a nap (while David entertained the kids) until Daddy showed up with dinner. "Pizza for my birthday party!?" Benjamin squealed with delight. You can never have too much pizza.

After dinner we opened presents. Benjamin had been patiently waiting all day for this moment and was so excited! He got a little LEGO set with monkeys from his sisters... 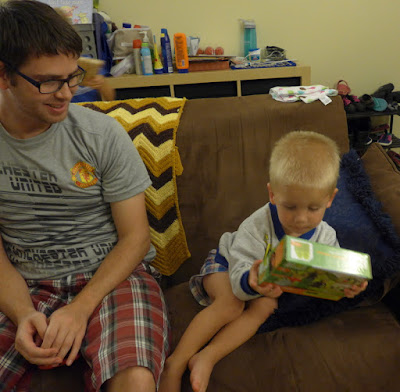 And a Curious George DVD from Naanii and Bumpa... 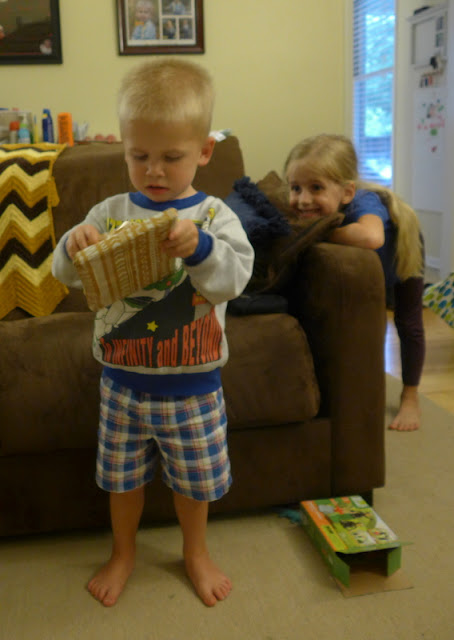 ...that he was thrilled to receive. 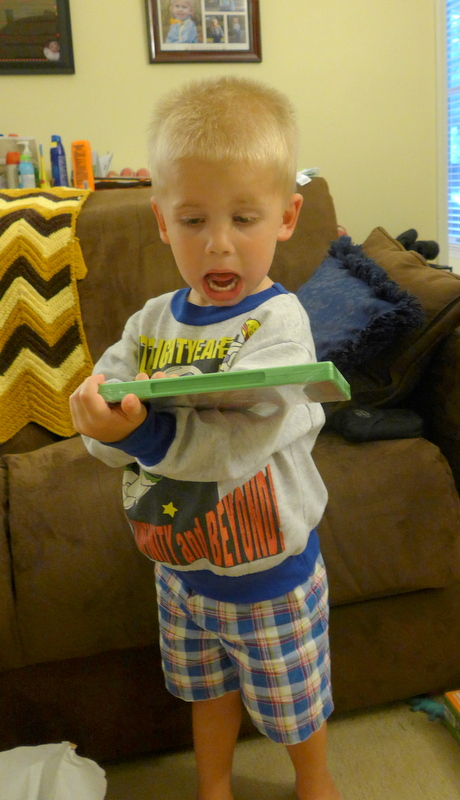 Here he is opening a card from Grandma and Grandpa... 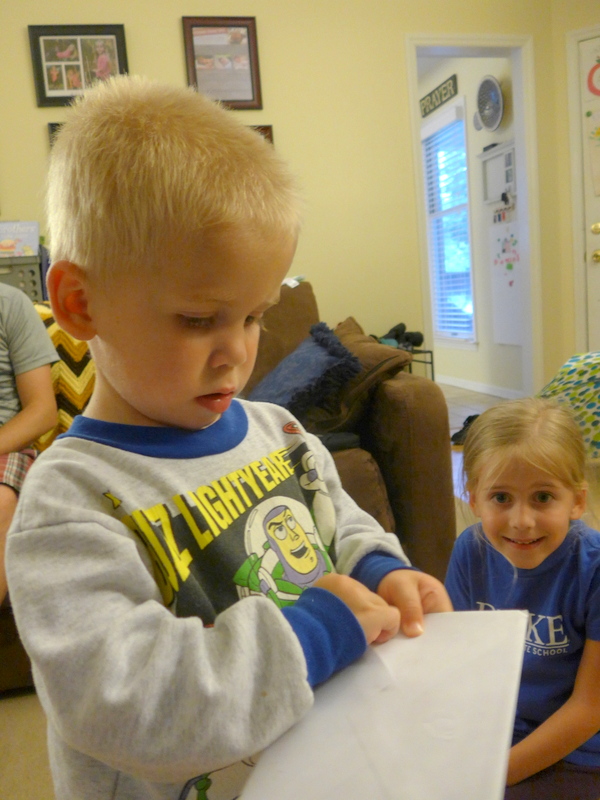 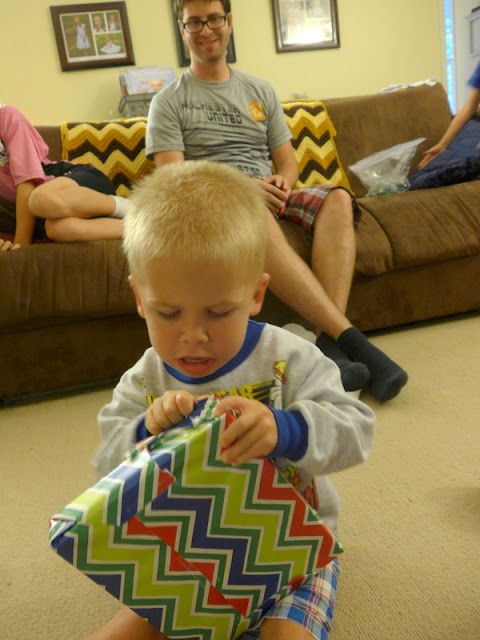 ...(that we may or may not have gotten second-hand from a friend who was giving it away). 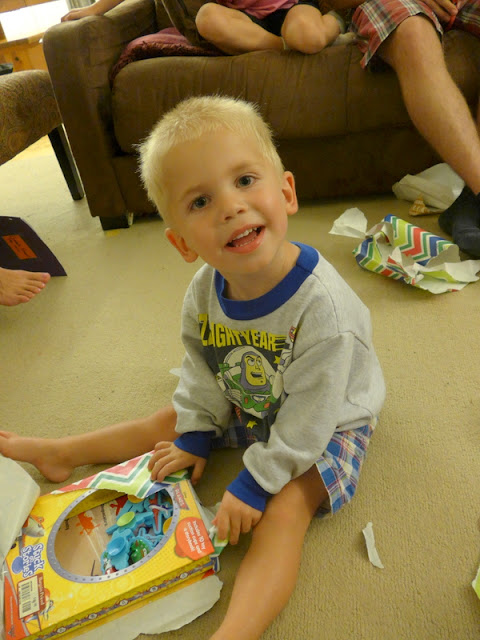 Here he is with another LEGO set—a little farm this time: 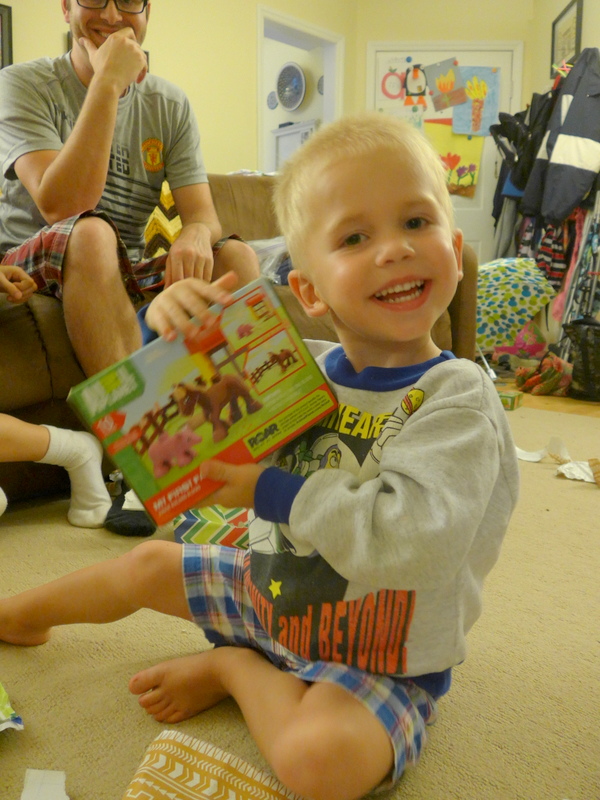 And here he is with the set of baby animals Naanii sent with Uncle David: 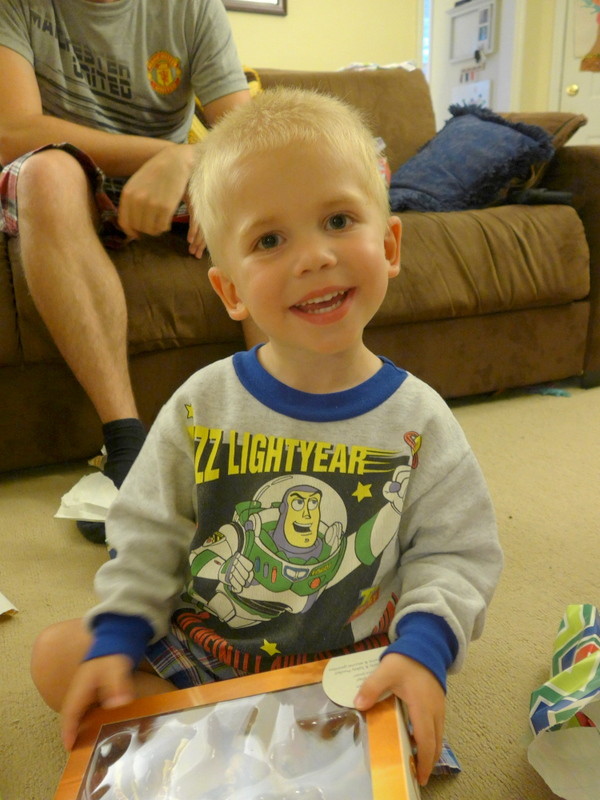 His last present was a big floor puzzle (from the same friend who was going through her toy closet) which the kids and Uncle David had fun putting together right away (and all the pieces were still there—score!). Oh, he also got some toy cars from his sisters (from Trading Tables, I think). Oh, and we busted out the 2T pyjamas Naanii sent him last year and they actually just about fit him. The pants are hanging to his hips by a thread, but they just about fit him. He's sleeping in them right now, in fact.

All in all he was quite happy with his haul and had a difficult time putting them aside for bedtime.

After presents (and before bed) we sang "Happy Birthday" and had cake. This year I made him a LEGO head cake. He was quite happy with it. 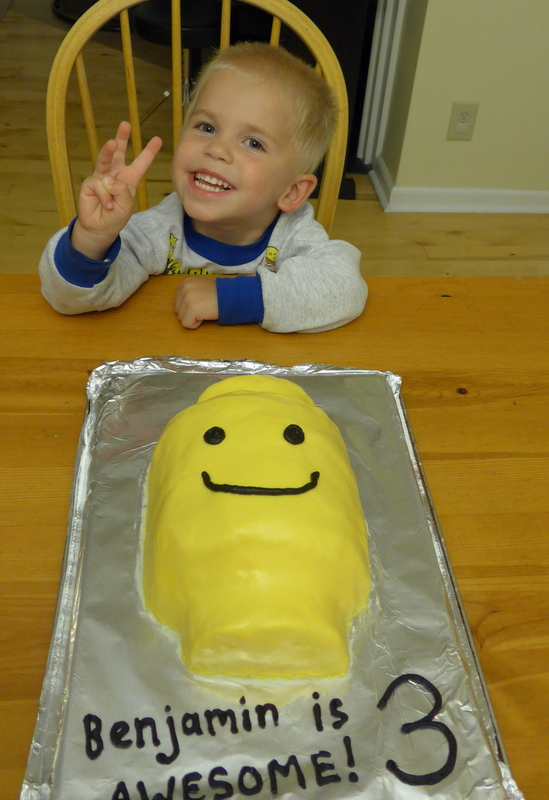 I made a white chocolate ganache to ice the cake with (and, boy, was it guh-nood), since I'd read that it works better under fondant than actual icing does. While everyone was a huge fan of the taste (it's much less sweet than using buttercream) I wasn't quite happy with how incredibly lumpy it turned out. I could not get it smooth, but it was my first time making ganache and it tasted fine so what's a few lumps? When we were at the store getting some last minute ingredients (whipping cream and marshmallows) Andrew found some LEGO candles and had to get them. They were a nice touch, I have to admit. 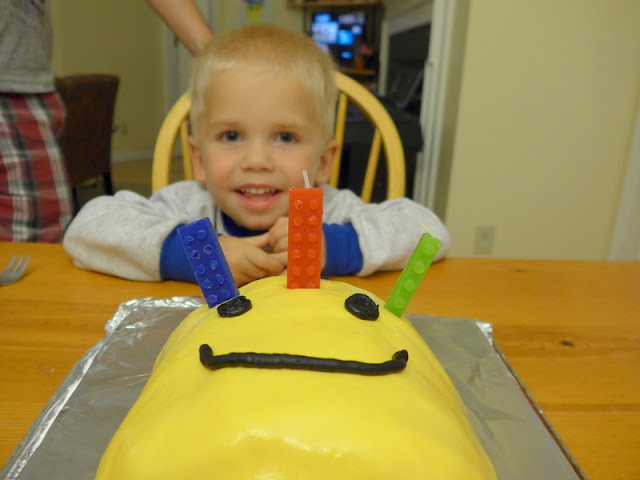 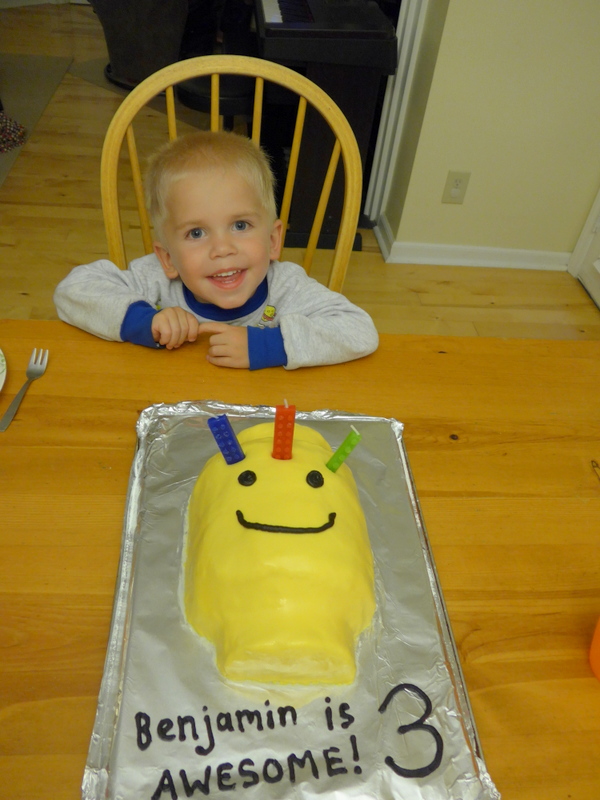 Benjamin was overjoyed to be sung to. He could not stop grinning. It took him three tries to blow out all three candles (Uncle David was happy to see that Benjamin knows how to blow candles out properly and didn't spit all over the cake). 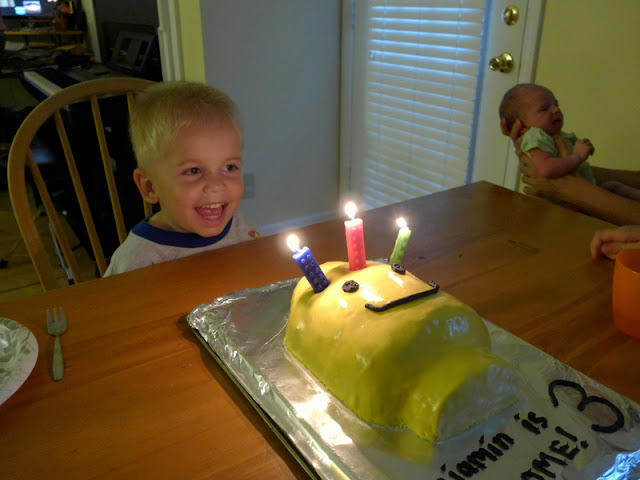 We had two cake mixes—one was yellow and one was strawberry. I let Benjamin choose which one he wanted, hoping he'd pick yellow...because LEGO head...but of course he picked strawberry. He loves strawberries and strawberry-flavoured anything.

It was a tad morbid-looking when we started slicing up the cake. 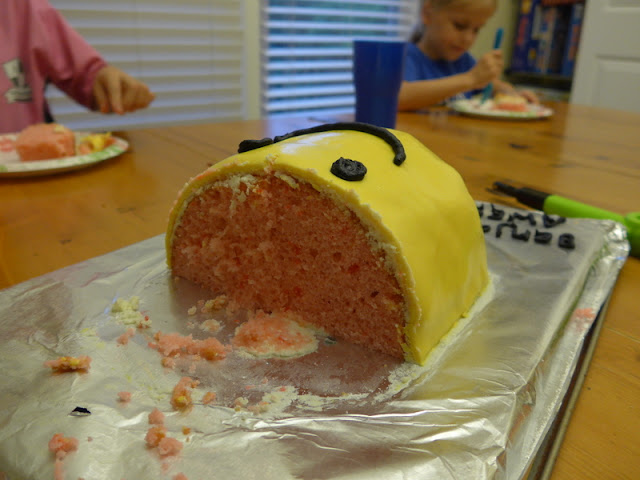 Grandma Skyped us during cake and Naanii phoned us during scripture study. Benjamin was excited to talk to them both and tell them all about his birthday. He also requested that Grandma sing to him. "Aren't you going to sing to me?" he asked her over and over until she sang a "Happy Birthday" solo to him. He wasn't quite sure about talking to Naanii on the phone; our kids all think phones are weird. Like, how do you even talk to people when you can't see them? They're so used to Skyping with everyone.

Before bed we asked Benjamin "So, how does it feel to be three?"