School's out for summer

"Can we do something fun today?" the kids asked in a way that hinted that we've never done anything fun.

Rachel had just walked off the bus. And knocked on the door. Because we locked her out. Because I forgot it was an early-out day and decided to take a nap right when I should have been heading out to wait for the bus. Oops.

After all, it's the last day of school—and an early-out day to boot—so we needed to celebrate.

"Can we go to the pool?" they begged.

"No," I said because I can't get in the water yet and watching three kids at the pool while holding a newborn seems about impossible without having at least one grown up in the water. "But we can go to the splash pad."

And so we got ready to go to the splash pad. It's a relatively low-key activity as far as parenting goes. I just parked myself on the only shady bench and read a book while the kids played between the playground and splash pad. It was 95°F today so the shade wasn't incredibly cool but it was tolerable; we only really ran into trouble when our shade dissolved into sunshine, but I eventually found another shady spot to hang out in (though it involved sitting on a picnic table). 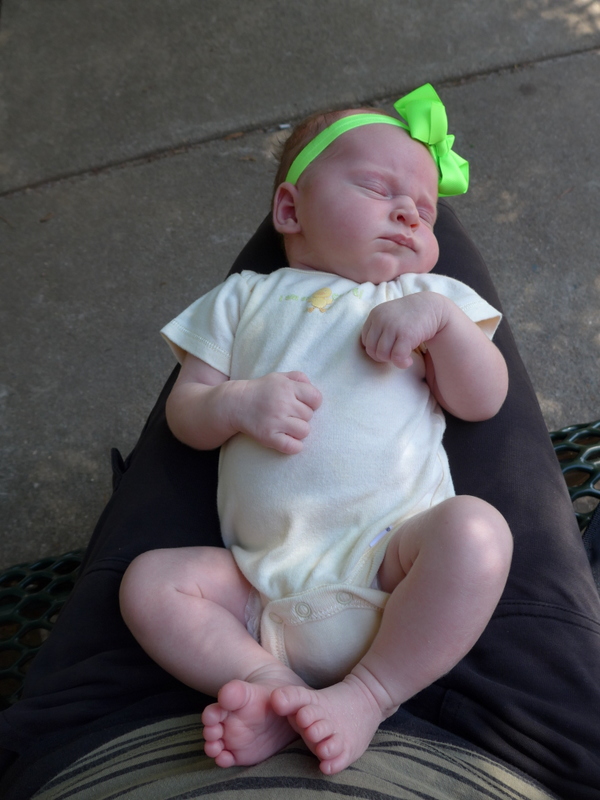 We stayed for about two hours, which was a little bit swelter-y for me and Zoë (though we did enjoy a little mist a few times neither one of us wanted to get in and get soaked) but it was just right for everyone else. The kids had a blast—and for two glorious hours they weren't fighting and screaming. 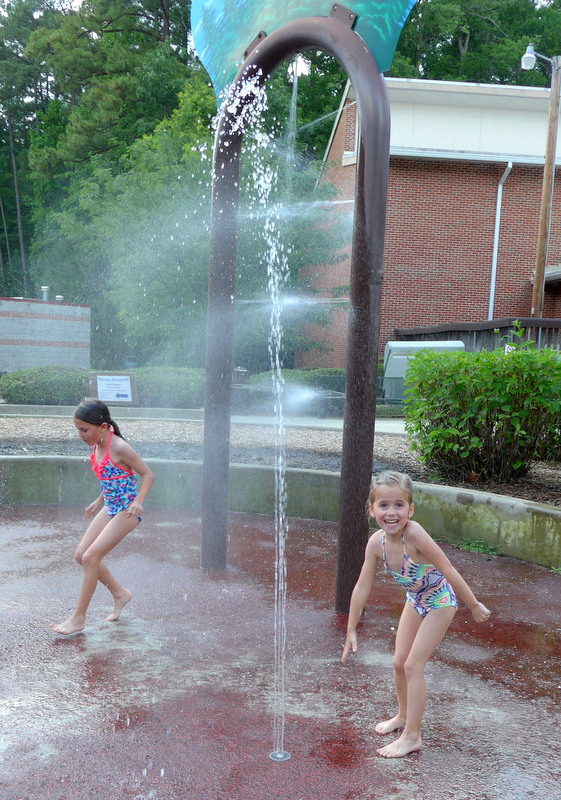 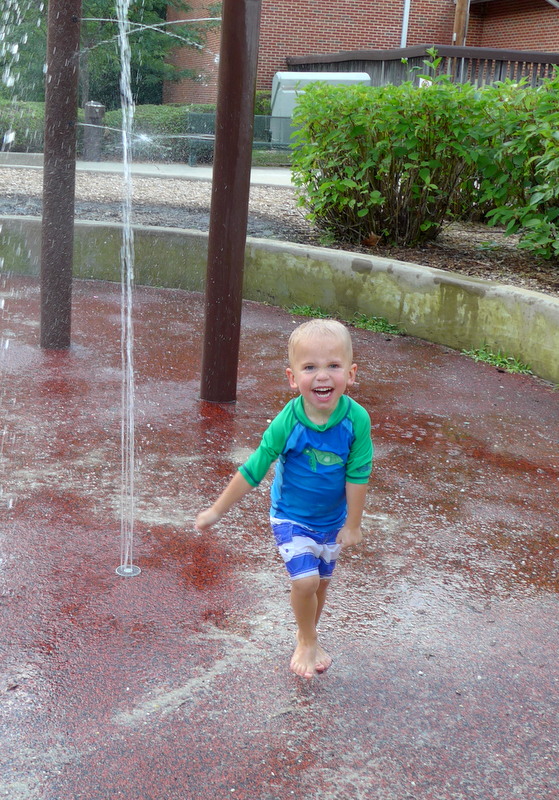 As an added bonus their Crocs are now squeaky clean. 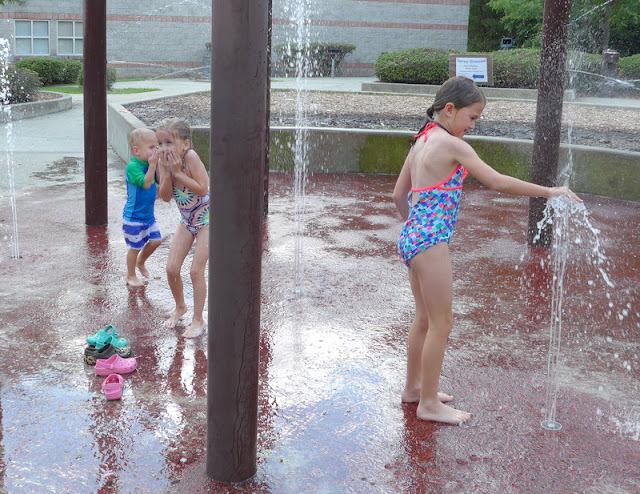 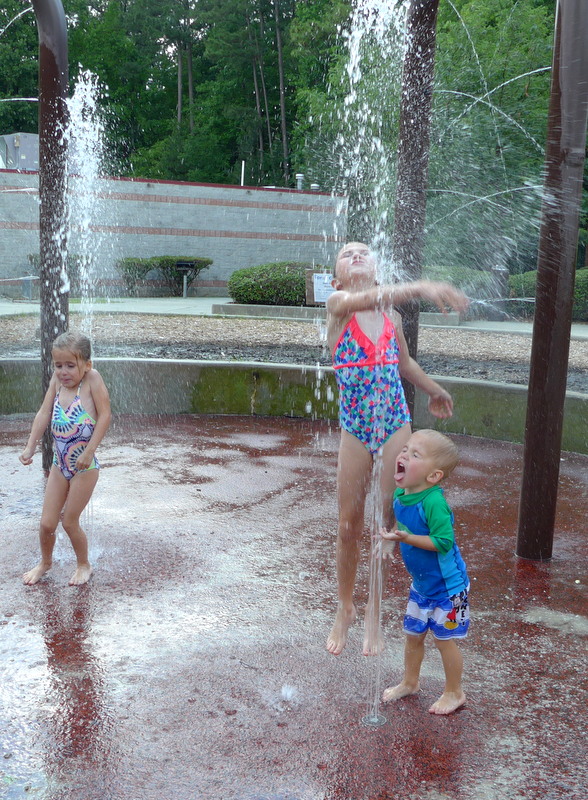 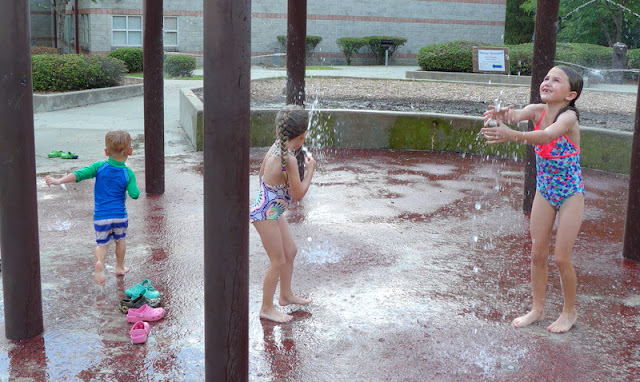 They were a little upset that I forgot towels but I was like, "Dudes—I didn't forget towels. You forgot towels. Because remember how you all got into the van and were yelling at me to hurry up while I was packing the diaper bag and loading up your sister. Guess what you could have been doing while I was doing that? Yup. Getting towels."

The towels aren't exactly kept in a secret place. In fact, our pool/beach towels (which are really just a collection of falling-apart bath towels we adopted from Grandma's linen closet when we moved) basically live on the front porch from April to October. They come inside to get washed occasionally but they soon reclaim their spots outside, hanging over the railing or draped across a chair to get dry.

It was 95°F though, so not having towels wasn't exactly a big deal. I told the kids to run around in the sun for a few minutes to get mostly-dry before getting in the van. It worked just fine.

I, for one, am excited for summer break for the following reasons: no early mornings, no homework, so many fun plans with family.

I'm also a little overwhelmed (already) by our rather intense schedule. I realize we're not actually packing the whole three months of traditional summer break into our short five week break (and we're certainly looking forward to our fall intercession plans (and fall intercession is why we have a short summer)) but this summer it feels like we're cramming three months into one...and summer break hasn't even really begun yet.

At this rate I can tell that I'll be more than ready for school to start up again in July...maybe.
Posted by Nancy at 10:20 PM