Andrew got home from New York on Saturday afternoon around 4:00. It was nice to bump into him before my fight to Utah, which got us out of bed around 4:00 Sunday morning. I saw him for approximately twelve hours after not seeing him for two weeks--not great planning on our part! I mean, we should have planned for at least thirteen hours.

We were scrambling to get everything done, but in the end we got everything done that we needed to, I guess, because here I am in Utah (and I don't think I forgot anything too important).


I got to fly alone with Zoë, which was almost like a vacation. Our first fight was a little awkward. No one wanted to sit with us!

We got to board after the VIPs because I was travelling with a baby; there weren't assigned seats so I just picked a seat and sat down and waited for everyone else to board. No one sat in our row; instead the remaining passengers were stalking up and down the plane, desperately seeking out a row without a child in it (there were a lot of children on this flight).

A few people almost sat next to us but as soon as they saw Zoë, they'd jump away and say with disgust, "Oh! There's a baby on this row!"

Soon the flight attendant was there trying to convince people to sit next to us.

"Two seats together? Perfect!" exclaimed one man, who I should probably mention had a kid in tow himself. "But there's a baby in this row," he sniffed.

"But she's such a lovely baby!" the flight attendant said.

Way to make me feel like a social pariah! Ew--not a baby!

Eventually the flight attendant was able to coax a soon-to-be-grandmother into my row (though she still wouldn't sit beside me). The middle seat was eventually taken by a college student studying for the GMAT. And do you know what? My baby behaved perfectly on that five hour flight. She didn't squawk once, ate twice, and only had one dirty diaper. I really don't know what everyone was so afraid of--you'd have thought I'd been holding a ticking time bomb, not a baby!

The second flight--from Las Vegas to Salt Lake--was much more comfortable for me. I walked on the plane and several people oohed and ahhed over my baby, not that I expect people to constantly be in awe of my offspring but seriously: if you can't say anything nice don't say anything at all.

That flight was only an hour, so soon I was greeted by my smiling family, and they were all basically tripping over themselves to get a glimpse of the baby.

Here we are waiting for my luggage--Auntie Josie holding Zoë and Uncle Patrick trying to ignore the camera pointed at him: 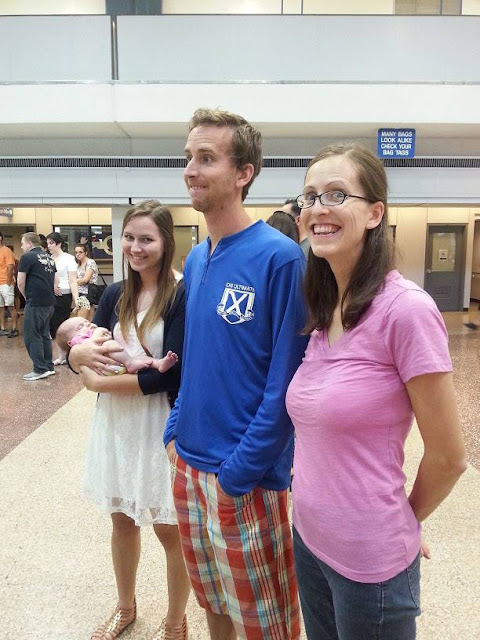 Anyway, the backspace key doesn't work on this computer so I'm suddenly very aware of how lacking in proficiency my typing skills are (do I really use the backspace key that much!?) and my baby is pretty sure I'm trying to starve her, so I'll write more later, I'm sure.
Posted by Nancy at 10:26 PM