We interrupt our regularly scheduled frantically-trying-to-catch-up-about-summer-break posts to bring you a very important message: the school year started yesterday! 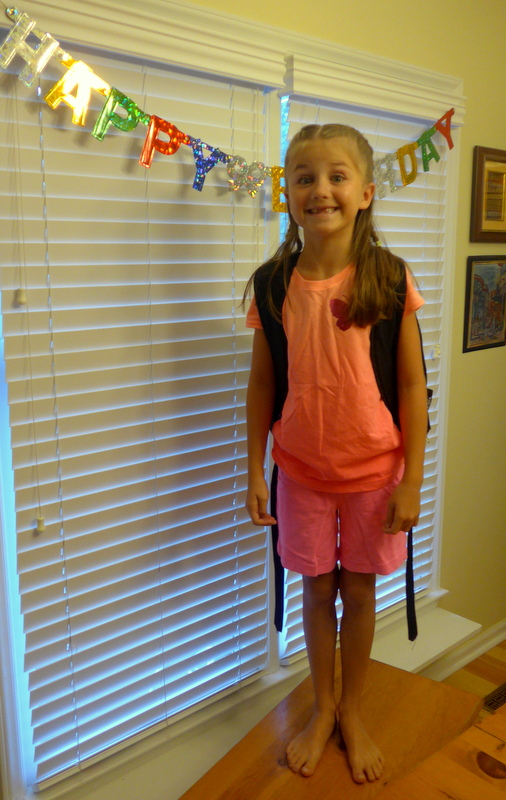 She rode the bus by herself on the first day. I can't believe she's in grade three already! She was pretty confident about starting this school year because (a) it's her third year in the same school and (b) most of her best friends from last year are in her class again this year, lucky duck. 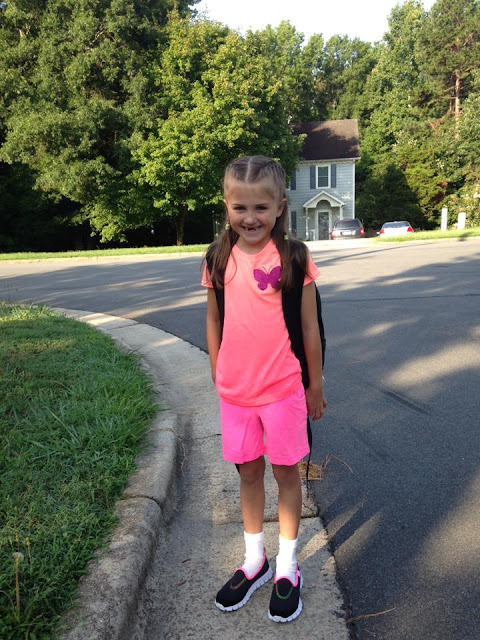 She reported to us that she had a fine day and then we got an email from her teacher that said, "This afternoon, a child went over to my bookshelf (although he was not told to) and he accidentally knocked over the corkboard that was supposed to be mounted on Friday but wasn’t.  Unfortunately it fell on Rachel. I’m sure it scared her because she was reading. I checked on her many times to make sure she was okay. She said she was but she might have a headache or be a little sore later (hopefully not). And of course this happened on her birthday…not a great present!!"

This morning a very enthusiastic Miriam woke up to get ready for kindergarten. A long time ago I'd taken her shopping and we found a shirt and some pants on the sale rack that she decided she'd wear the first day of school. It's been on her mind ever since then so that's what she wanted to wear this morning, of course.

(Don't mind the "glow" of the picture. It's ridiculously humid right now. Everything is foggy, including our camera lens. Our storm door is perpetually foggy, too.) 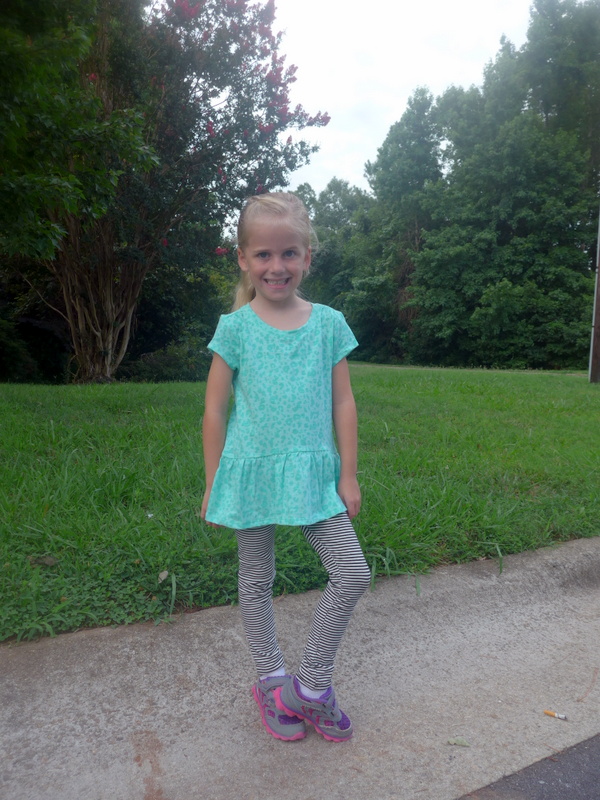 Here she is striking a peppy pose for Andrew before he drove the girls to school (because Miriam was so laden with supplies that even between both girls there was no way they could take the bus):


A few days ago they (the kids and their grandparents) were playing games out in the trailer (Grandma and Grandpa are here and rented a trailer to stay in, which is parked in our driveway, because our house is getting a little too crowded for company now that we have four children (and have already been in each other's hair (in various arrangements) for five weeks). I believe it was chutes and ladders that they were playing. Miriam stood up on her seat and leaned across the table, sticking her rear end high in the air, so she could reach the spinner. She flicked the spinner and it landed on 5, which happened to be the exact number Miriam wanted.

"Well, wiggle mah butt!" she exclaimed, in the lovely southern drawl she affects so well (while waggling her tail end in the air). "I got a five!"

This picture of her being sassy made me laugh because although she didn't say, "Well, wiggle my butt—I'm in kindergarten!" I can almost hear her saying it.

The things this girl comes up with to say!

They'll be taking the bus home together this afternoon. We'll see how Miriam likes it. I know Rachel's excited to show her the ropes and can hardly wait to take it with Miriam in the mornings so that she can walk Miriam to her classroom. She's really starting to enjoy her role as big sister. 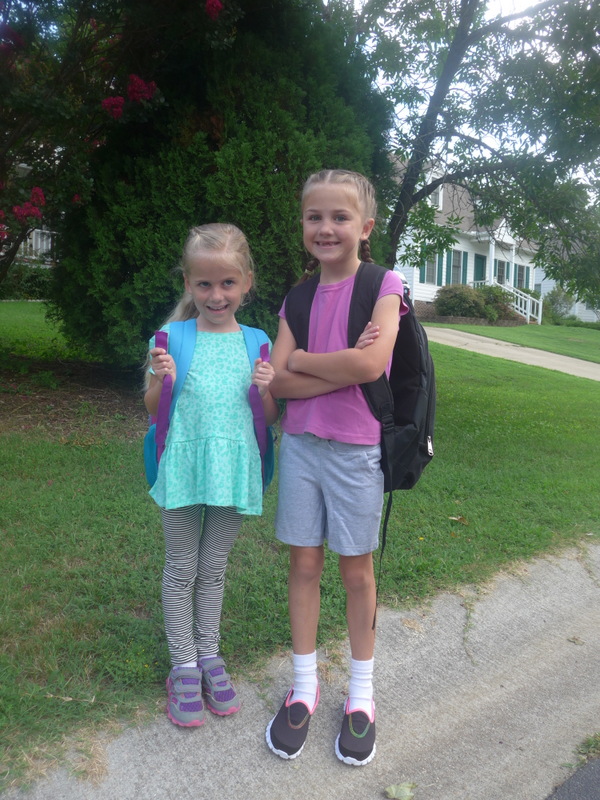 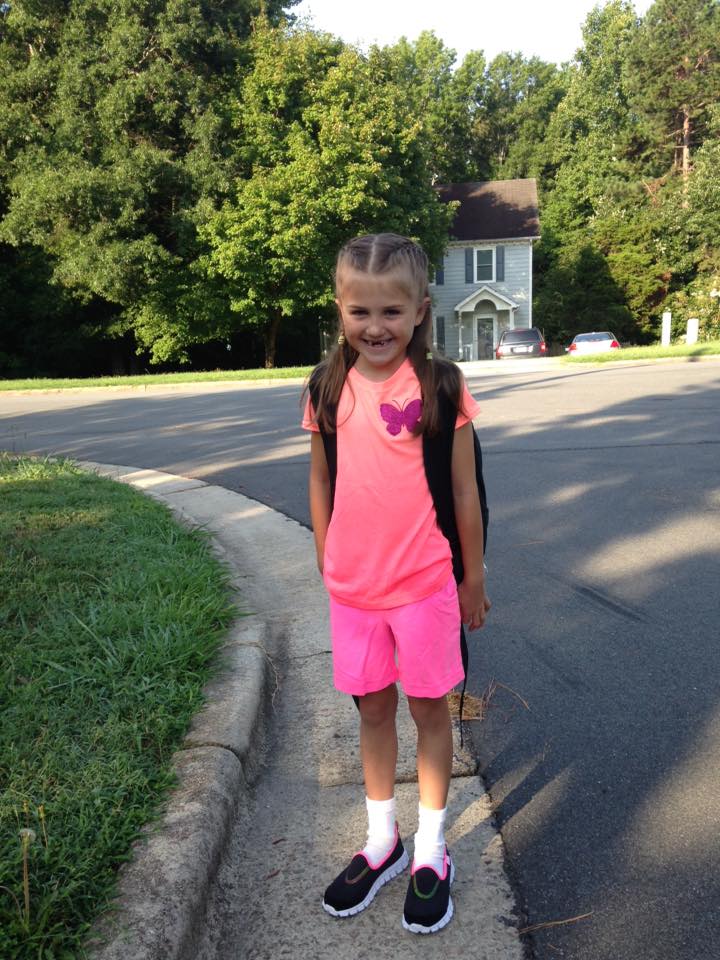 Oh! But her hair!

This morning while I was doing Miriam's hair I glanced up at Rachel. Her hair had been pulled into a ponytail and it looked fine from the front, but when she turned around it was nasty. She'd left in her braids from yesterday, which was fine because they were hardly fuzzy, but I'd only braided half of her hair. The part I'd left down was matted and gnarly and gross...and that made her ponytail look gross, too.

"Did you brush your hair?" I asked her.

So she went to the bathroom and yanked out her ponytail and undid her braids and came out a big crying mess because she couldn't do her hair and we had less than five minutes before they had to be out the door!

I was a little upset that she'd taken out her braids, but at least she was going to brush her hair. I helped her work through the tangles and then quickly braided all of her hair into two tidy braids.

It's the second day of school, for crying out loud!

You might be able to escape the house without brushing your hair when we're a month or two into the school year, but certainly not on the second day! We're still trying to make a good impression on the teacher—make her believe we've got things pulled together in our house, that we always wear fresh outfits, that we always fill out every paper they send home in a timely manner, and that we always, always brush our hair. We need to convince our teachers that we at least try to do those things.

We do try to do those things...but we always fall apart by the end of every school year anyway.
Posted by Nancy at 1:15 PM