Now that it's almost two weeks ago, I'm not sure what I'll remember from the day, but I do know that my mom had to work so we headed up to Temple Square to meet my Auntie Arlene by ourselves. We parked at the Conference Centre and started heading to the Visitor's Centre, primarily so the kids could use the restrooms. While we were walking there I got a text message from my aunt with this picture attached: 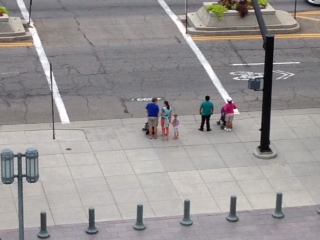 Auntie Arlene and Alexia were on top of the Conference Centre and saw us walking so they took a picture of us. It was rather funny! We ended up meeting them at the tabernacle: 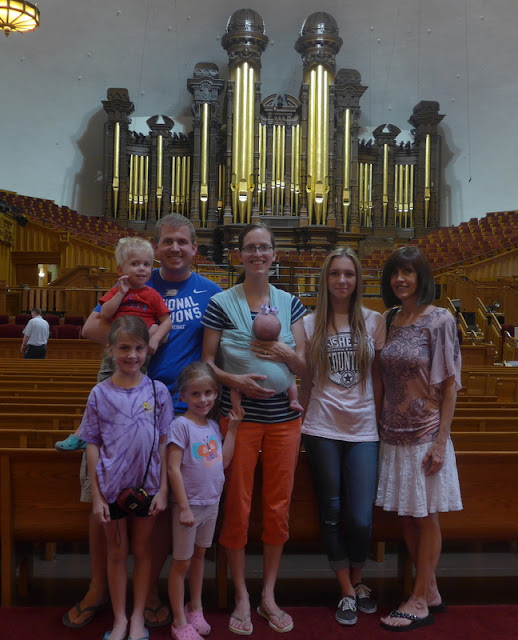 We then headed back to the visitor's centre to see the Christus statue: 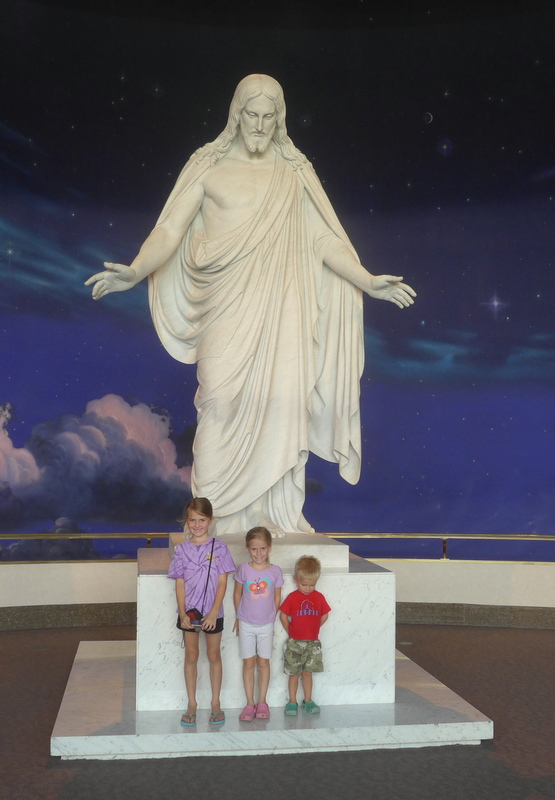 Next we went to a concert at the Assembly Hall "with Bonnie Goodliffe at the organ" (as Andrew likes to say, channeling a General Conference announcer voice), which was lovely, though just a tad longer than we thought it was going to be. The kids survived it well, though. When that was over, poor Lexi was ready to head back to Uncle Bruce's house for a rest, and Zoë was ready for another diaper change.

I put her down on the grass while I pulled things out of the diaper bag and she squirmed around, quite unsure of this new, rather prickly, texture. 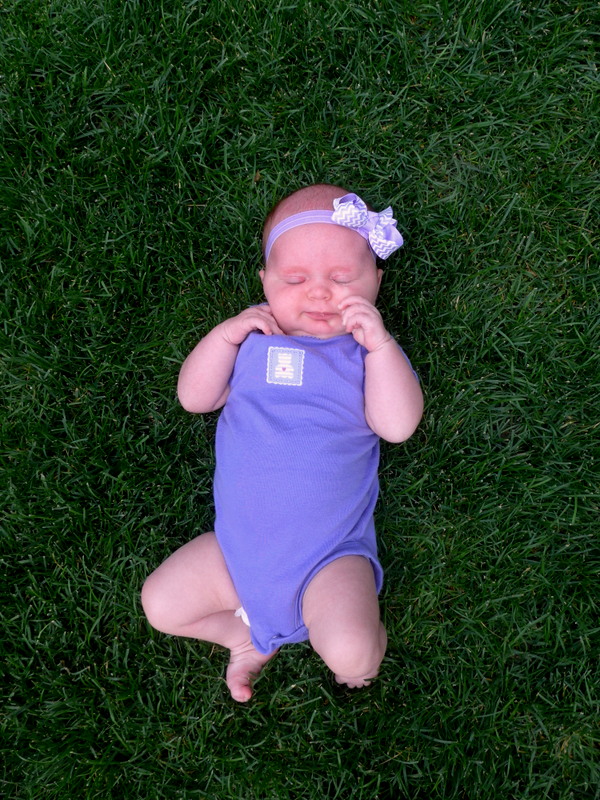 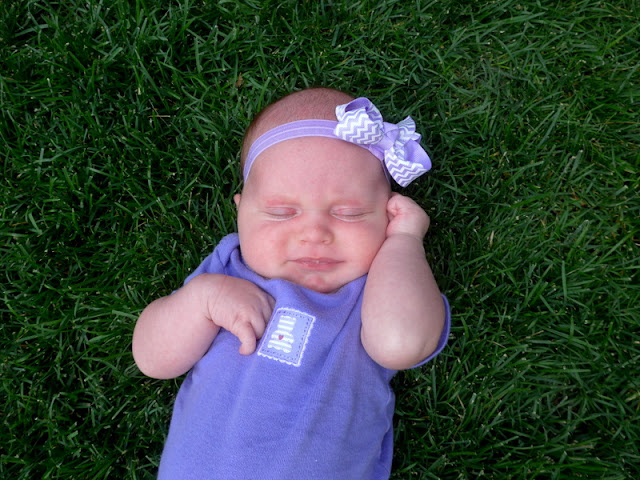 She was much happier with the burp cloth under her: 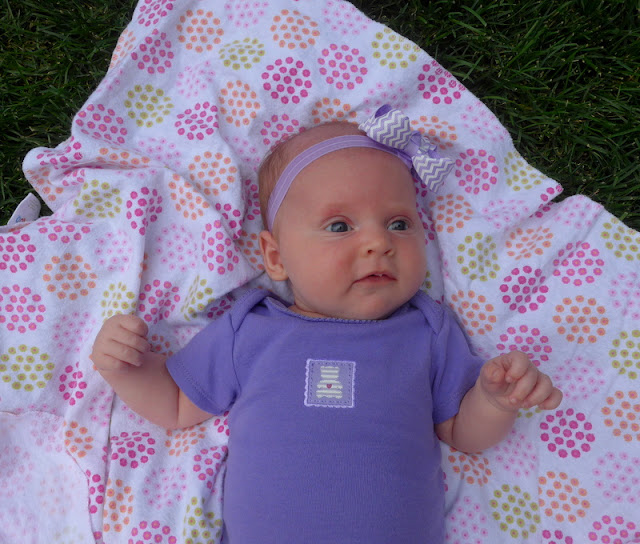 Left on our own, we wandered through the gardens toward the Beehive House, which Andrew doesn't remember ever touring. We stopped to take a few pictures of the temple and I let Rachel hold Zoë while standing (on concrete!). 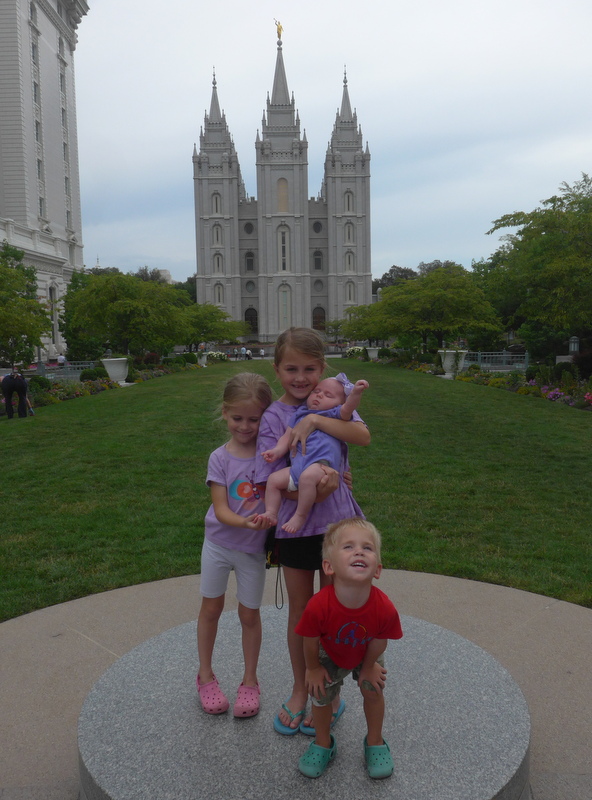 "When can I wear her in the wrap?" Rachel asked.

I looked at her and had a million thoughts at once. Here's a brief sample of what ran through my mind:


1) Boy, I'm glad she's enjoying this big-sister thing. She complained all through the pregnancy about how much extra work this new baby was going to be for her but now that Zoë is here she's begging to take a turn changing her diaper and wants to hold her all the time!

3) Is Zoë unfloppy enough to allow Rachel to carry her?

4) Did I really just consider letting Rachel carry her?

5) I was about Rachel's age when I carried my little sister around.

6) But what about that time I fell down the stairs while carrying her? Or how about that time she flipped out of my arms and landed on her head and started bleeding all over the place?

So I took the wrap off and said, "You can try carrying her on the grass, okay?"

And then I tied the wrap around her and set the baby inside and held my breath. I'm not sure what I thought was going to happen... 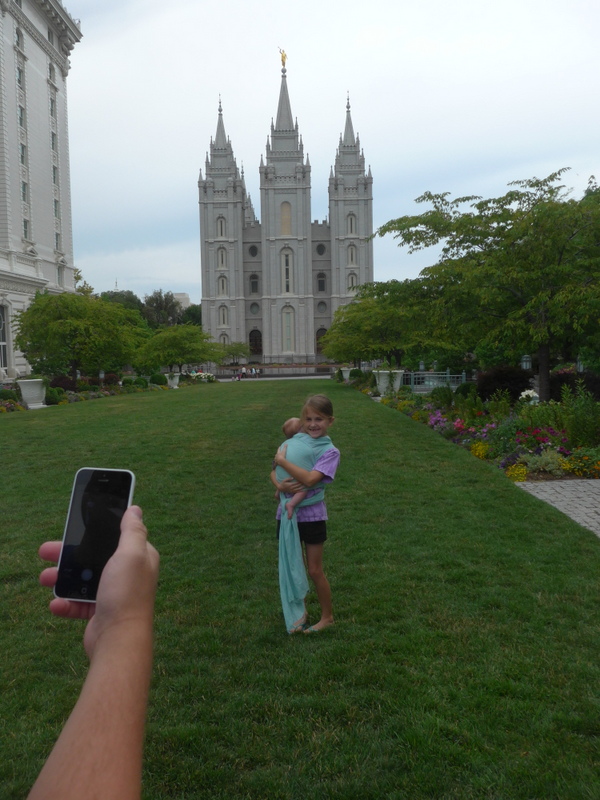 Zoë found Rachel's shoulder was quite snuggly (also note Miriam the photo bomber by the fountain): 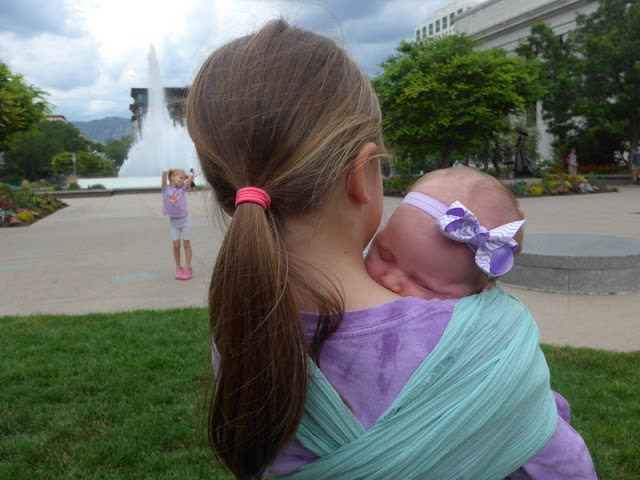 I asked Rachel how she liked it and she said she loved it and wanted to walk all the way to the Beehive House with her in the wrap. So I tucked up the straps, which are way too long for Rachel, grabbed her hand (in case anything catastrophic should happen) and off we went. I micromanaged her every move the whole way there: "Watch out for that crack in the sidewalk. It gets cobble-stoney here. Don't trip! There's a dip coming up. Careful on the stairs!"

She did fine and people thought it was rather adorable (we got plenty of stares). Rachel carried Zoë all through our tour of the Beehive House, too, but I took her back when we were finished. Carrying babies is hard work for your back and Rachel needed a rest. Truthfully, by this point in the day we all did, so we walked over to the City Creek Mall and sat by...the city creek...until we started getting texts from various family members saying they were ready to meet up again.

Oh, while we were touring the Beehive House, the sister missionaries asked how we thought the clerks got up to the second story of the records room. For all we could tell there was no way up.

Benjamin bravely raised his hand and the missionaries called on him.

"Sometimes people use cranes!" he said, as if that were the most obvious answer in the world.

The entire room cracked up over that one. In truth, there's a hidden staircase in the closet. But Benjamin's answer was top-notch. He's completely obsessed with cranes these days. 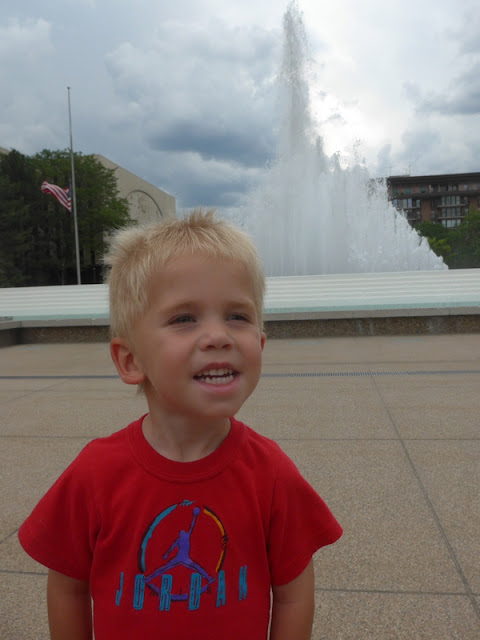 We met our family between the Beehive House and...whatever building is on the other side of that sidewalk (some administrative building). Auntie Colleen and Uncle LeRon showed up with Auntie Arlene and Lexi first. And then my mom and dad showed up, along with Uncle Bruce and Auntie Josie.

I suppose I should throw generational markers in there because Auntie Colleen and Auntie Arlene are my aunts, while Auntie Josie is my sister (but my children's aunt). So many aunts can get confusing, I suppose. But anyway, here we are together: 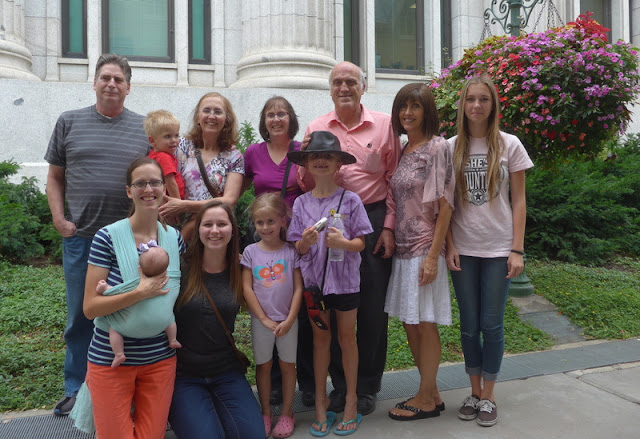 Also, he decorated his house with beehives—the banisters and doorknobs and other ornamentation around the house look something like this:

Here's Auntie Josie being silly with Miriam and Rachel outside of the Beehive House (that kid in the red shirt totally photo-bombed this picture): 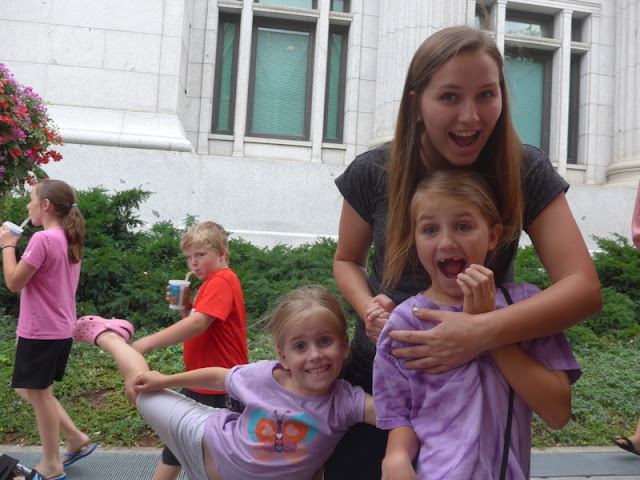 We also took some pictures of my mom with her sisters:

And of all four siblings together:

From there we took the train back to Uncle Bruce's house (making Benjamin's day) where we were met with the warm aroma of roast beef and mashed potatoes, courtesy of Aunt Sara.

My little family was excited for this meal because it was "normal" (ie. not sauerkraut). They might not be the most adventurous little people (or big people in Andrew's case) but Aunt Sara did introduce them to a new food they love (the little people, not Andrew). Jicama! My girls loved it.

We had a lovely visit (even if the children were a little too wound up for a small downtown apartment) and I got some pictures of everyone admiring Zoë.

And that just about sums up last Tuesday, though I'm sure I forgot many wonderful things I could have written had I been writing this in a more timely fashion.
Posted by Nancy at 11:32 PM