Last night Benjamin's coach emailed to ask the team to be at the field at 7:45 am for pictures. Their game time was 9:00 am. I thought this was, in a word, delusional. So I planned to be late and pull the, "Meh. Sorry. My husband is out of town and I have four kids and two of them had soccer games at 9:00 so... We're here now. Applause. Thanks," card.

But then he sent an email with a revised time of 8:30 and I decided that I could live with that.

Miriam's coach had asked that the team show up at 8:45, so this worked out perfectly. Grandma and Miriam dropped the rest of us off at Benjamin's field before heading off to her game.

We waited around and waited around until they finally called us over for our team picture...at 8:55 am. I kind of hate team picture day. I mean, it's fun to have a picture of the team for memory's sake, I guess, but I am simply not interested in buying professional pictures of my child in droopy soccer clothes (hashtag: bad mother).

The photographer asked the kids to put their hands on their hips and Benjamin could not figure this pose out, which was hilarious. First he had them up like chicken wings, but we got him to lower them a little. But he still just could not figure out what in the world we wanted him to do.

Here he is looking at his teammates for help: 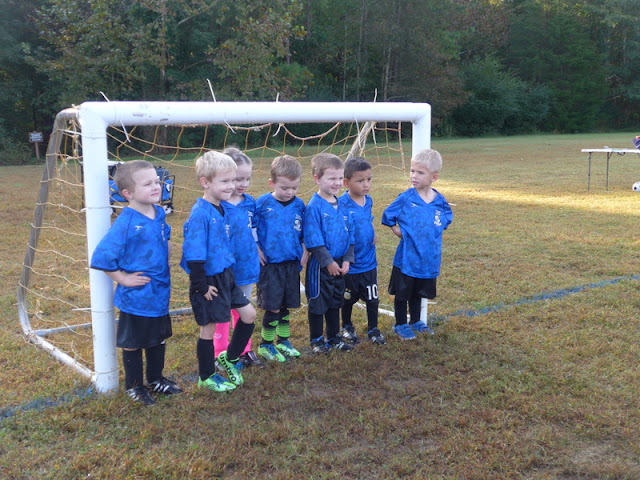 And here they are after they all kind of figured it out...kind of... 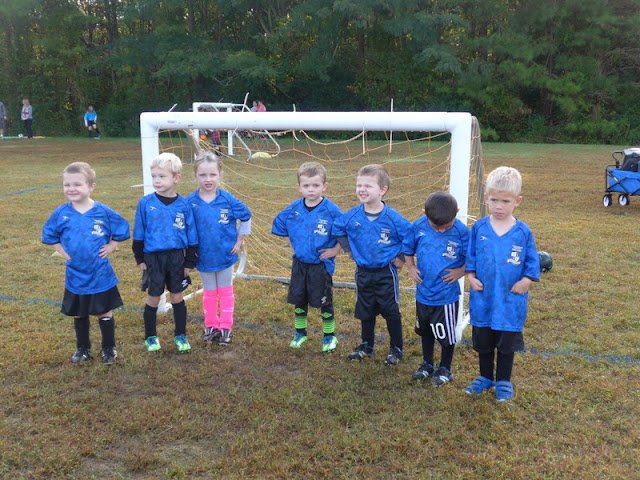 If I was the photographer I think I would have given up on this pose pretty quickly. But what do I know?

And here's Benjamin after he returned to us and we asked him, "Where are your hips?" 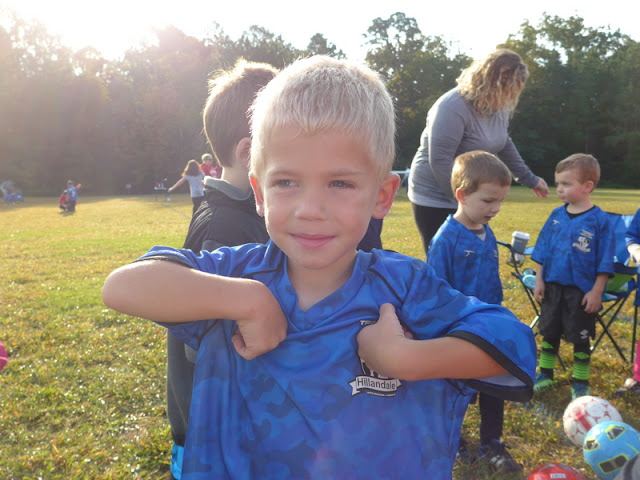 He has no clue.

He also has no clue about soccer, but that's okay because, really, none of the other kids do either.

Benjamin's favourite part is the kick off—because there's no question that it's his turn to kick the ball. He hates it when people steal the ball from him (it's just not decent behaviour). 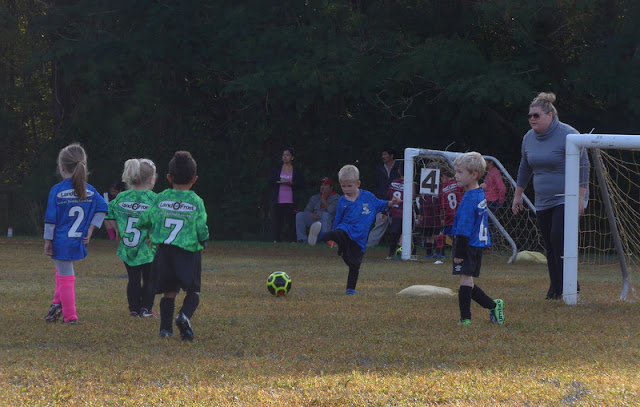 Watching four-year-olds play soccer is fairly hilarious. Allow me to illustrate why.

They trip all over each other... 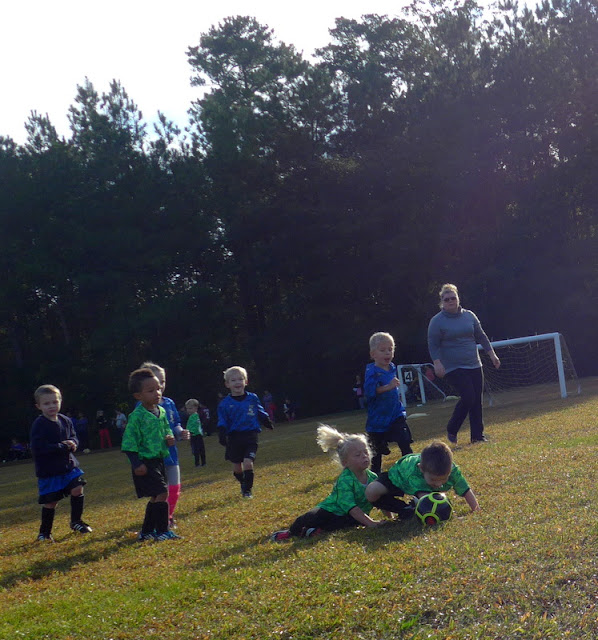 They run away from the ball... 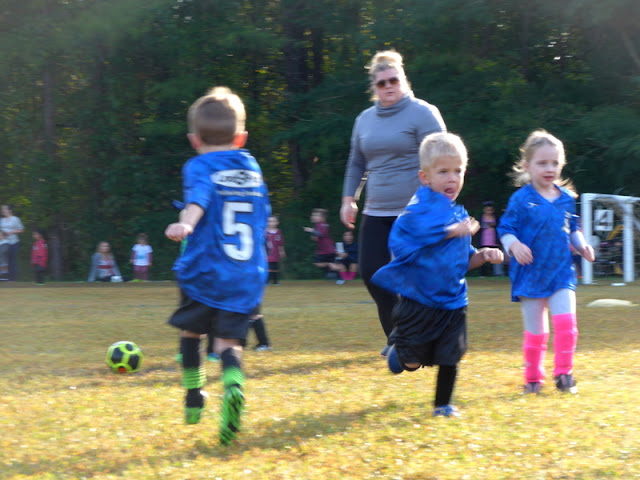 Their jerseys are so large they're drowning in them... 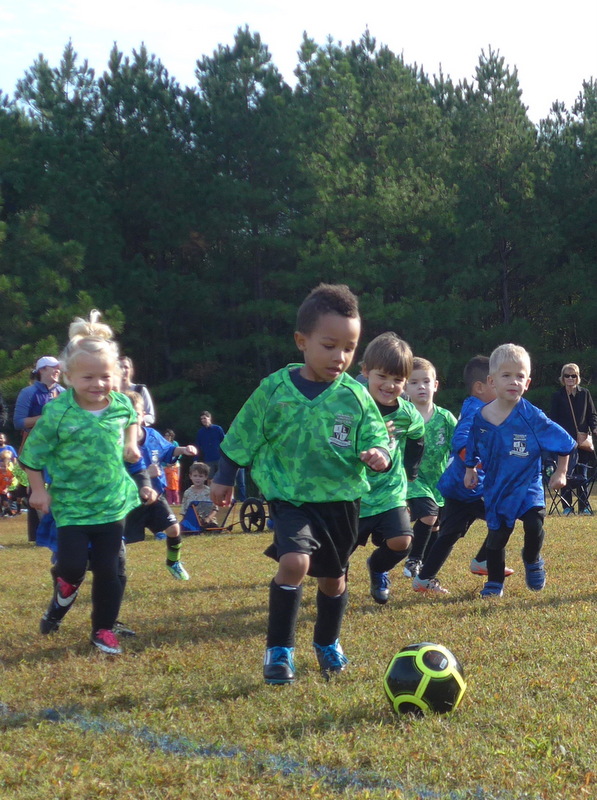 They get melodramatic when they want a break... 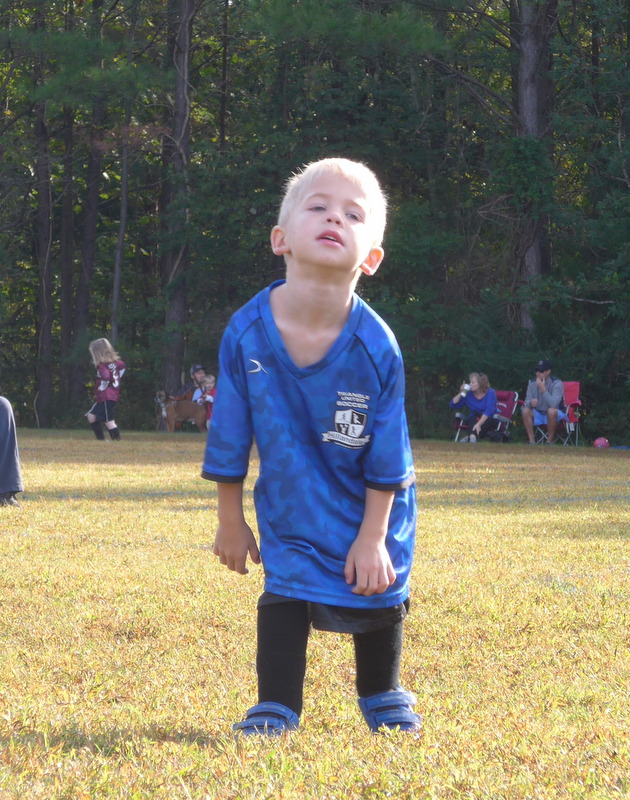 Oh, look. Benjamin got tagged out. He loves taking water breaks. It's probably his favourite part of soccer, actually. And he's still trying to figure out the hands-on-the-hips pose. 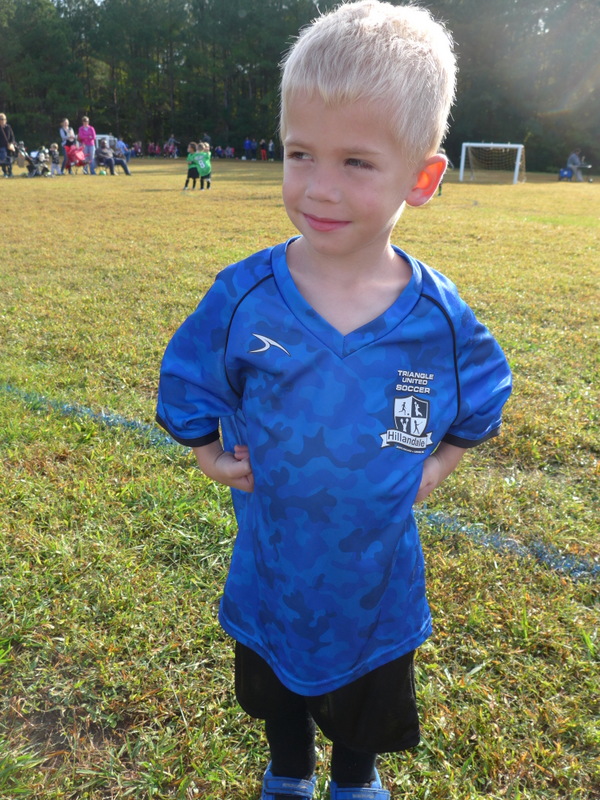 This is actually a pretty good moment in the game. All the kids seem pretty focused on the ball—especially that kid with the orange sweater under his jersey. That kid is a machine. He really knows his way around the ball. The rest of the kids...not so much. 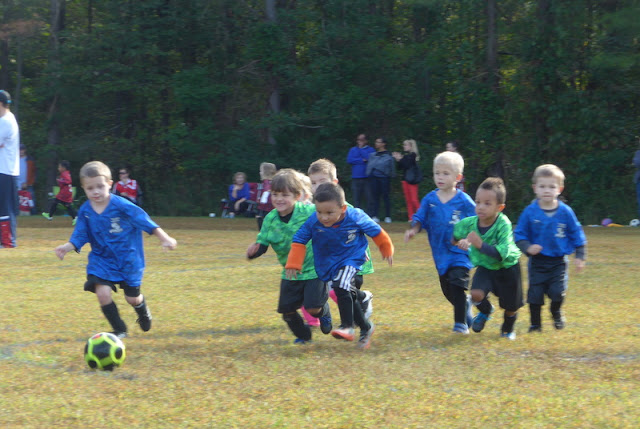 Here's Benjamin channelling Usain Bolt and flashing me a smile: 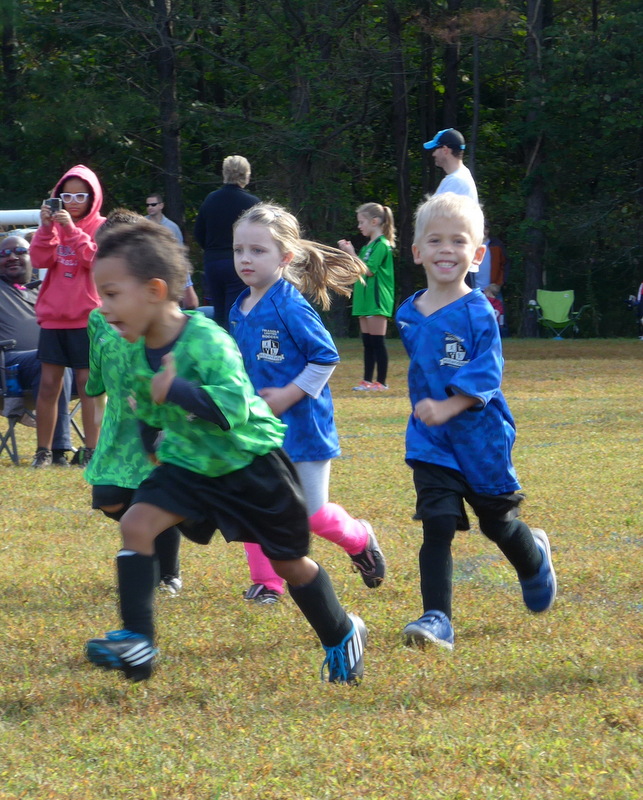 Here he is going all ninja on the ball: 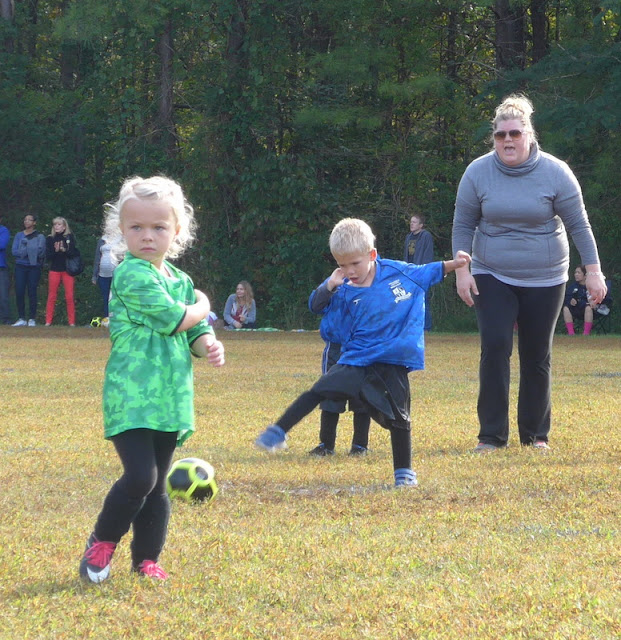 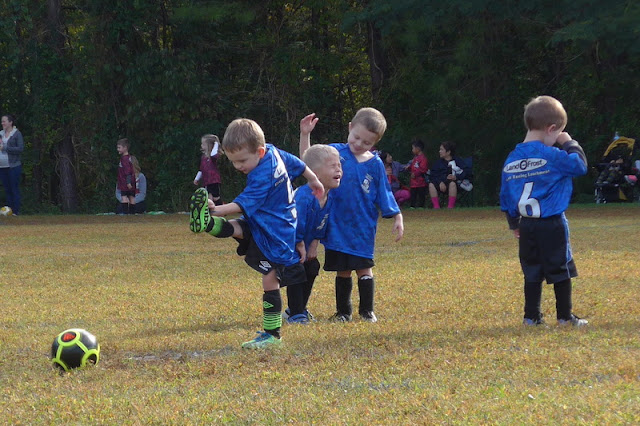 Then there's this picture of a full-on melt-down on the field (the little guy in green). Once again I have no idea what Benjamin is doing (he's #7 there). 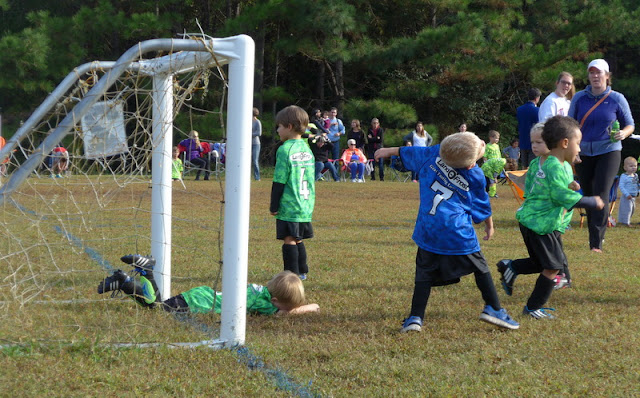 By the end of the game we didn't know what the score was and we still hadn't figured out where our hips were but we were pretty sure we all did a good job. Here's the team huddled up to do their cheer: 1-2-3! Go Blue Raptors! 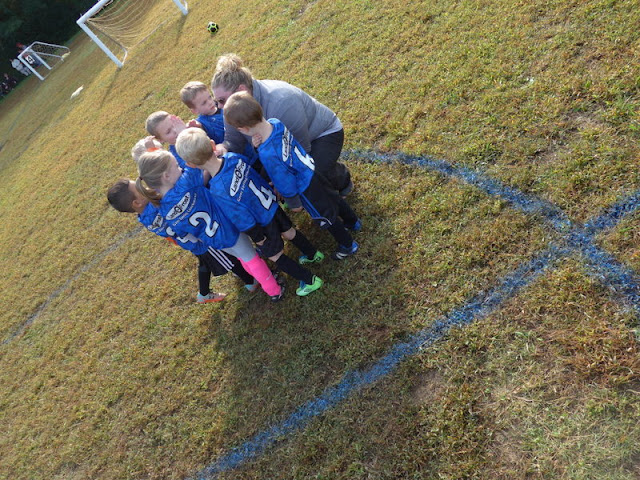 After the game we played at the playground while we waited for Miriam and Grandma to pick us up. Miriam said her game went well. She's been working on being more aggressive on the field. Due to weather/vacation/schedules I haven't been to one of Miriam's games in ages, but I did go to her game about a month ago (September 17th, actually)—when she kicked the ball for the very first time! Before that she'd run up to the ball and then freeze up. But this time she ran up to the ball and—WHAMO—just kicked it.

It was more exciting than making a goal, even.

Later when she came off for a water break her coach came up to give her a high five and said, "I told you the ball wouldn't explode."

It will be fun to see her play next week. I'm sure she's improved a lot the last few weeks.

I had to talk with Benjamin today about keeping his hands to himself on the field. When the kids are all huddled around the ball he'll run up to them and just plow through. I reminded him that we aren't supposed to use our hands in soccer—not for picking up the ball and certainly not for pushing our friends.

"But, Mom!" he said. "You say we need to be positive on the field. I'm just being positive."

"You mean aggressive," I said. "And that's true. You do. But you need to be aggressive in getting the ball...with your feet...not by running people over."

The highlight of my Soccer Saturday was watching Rachel's game. I was a little nervous when I saw what team we were playing because the girls on that team all looked quite a bit bigger than the girls on our team ("But two of them had broken arms," Rachel pointed out later, "So that gave us a bit of an advantage.") but when our team scored within the first ten seconds of the game the parents on our side all looked at each other and changed our tune. They ended up being fairly equally matched.

The girls (on both teams) played hard and showed great sportsmanship. For the longest time the score was tied 2-2, but we pulled ahead at the very end, bringing the score up to 5-2.

Rachel's been with many of the girls on her team for years, so it was fun to think back about how humorously terrible they were just a few short years ago because they were on fire today! It was really quite an exciting game.

Here's a few shots of Rachel doing what she does (she's #6): 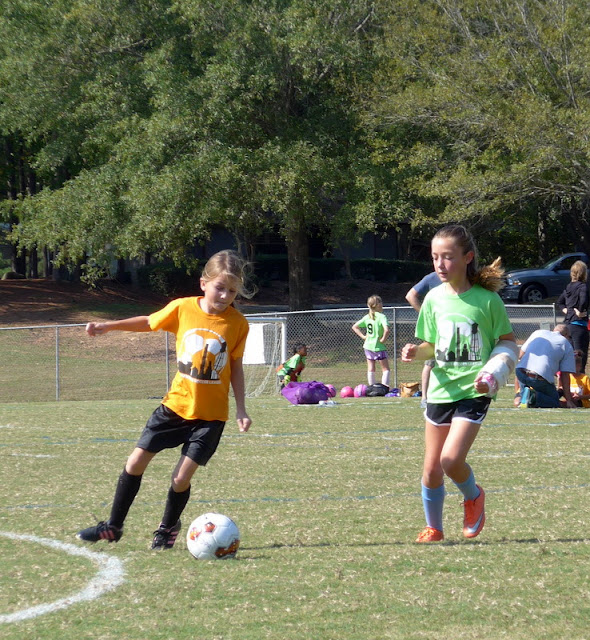 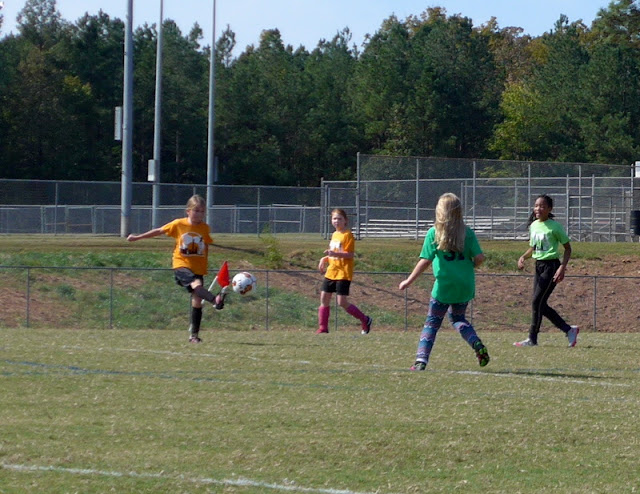 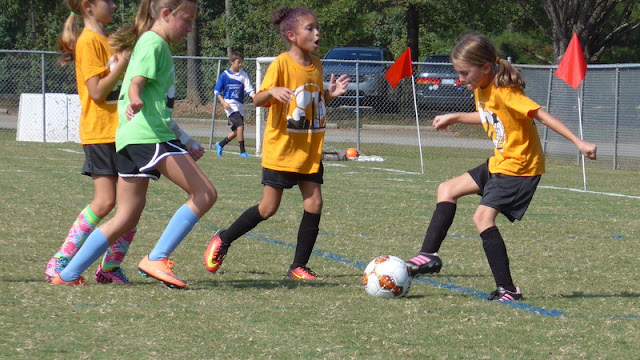 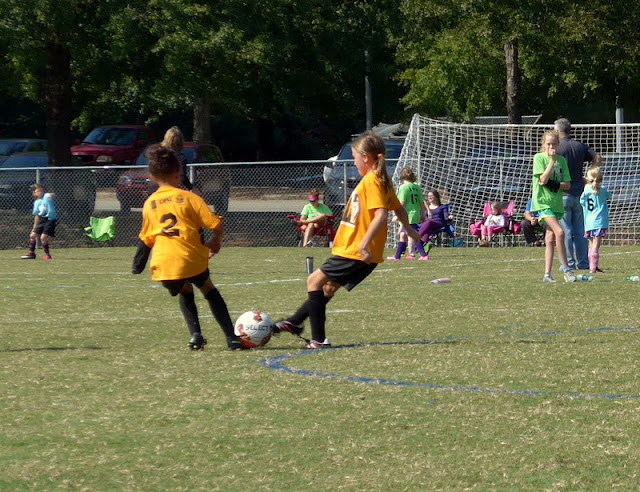 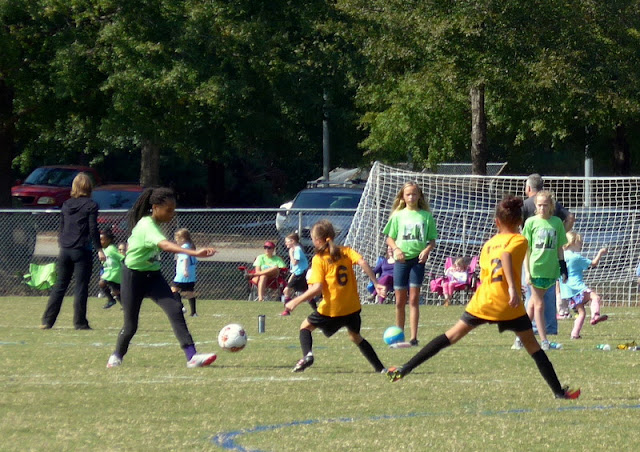 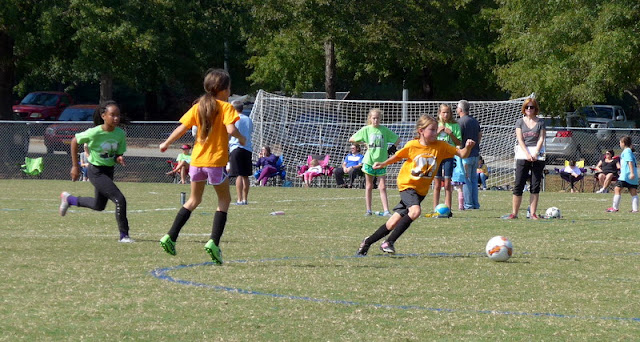 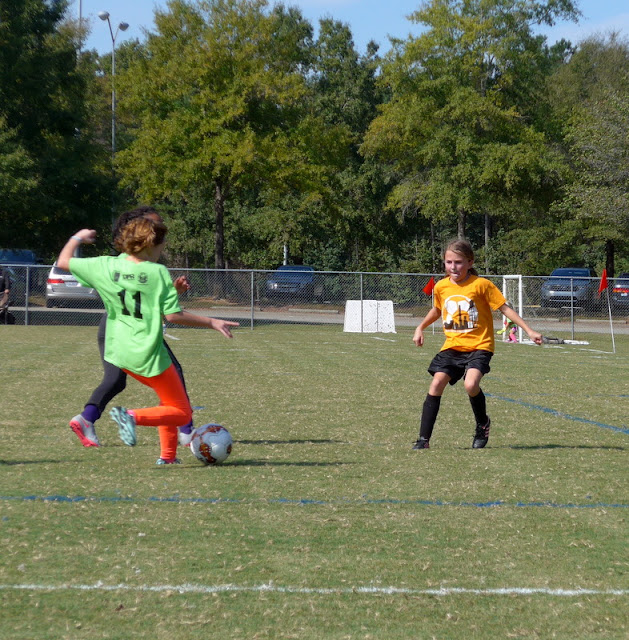 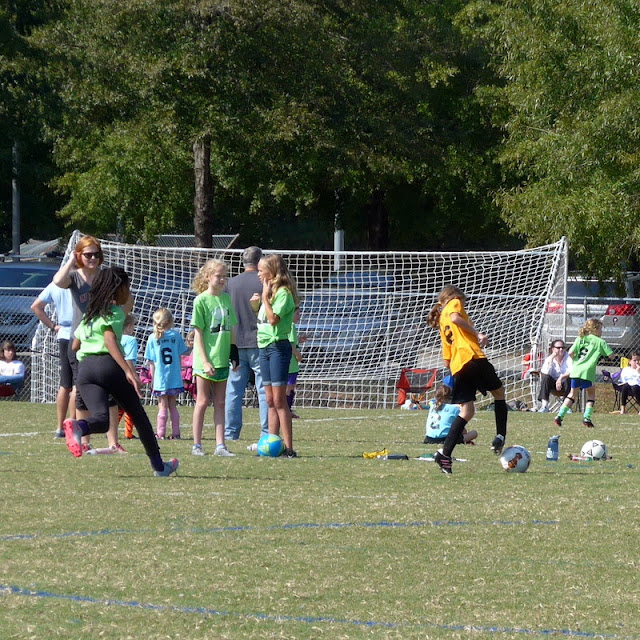 I wish I'd brought along Benjamin so that he could have watched Rachel balance aggression and sportsmanship so perfectly. She was fierce out there, but when she collided (accidentally) with a girl on the other team they helped each other up and made sure they were both alright.

It sure was a fun game to watch! (Did I say that already?)

And here's Zoë, who had to spend her entire Saturday at soccer games as well. She wanted to pray over her veggie straws before she ate them, little cutie. 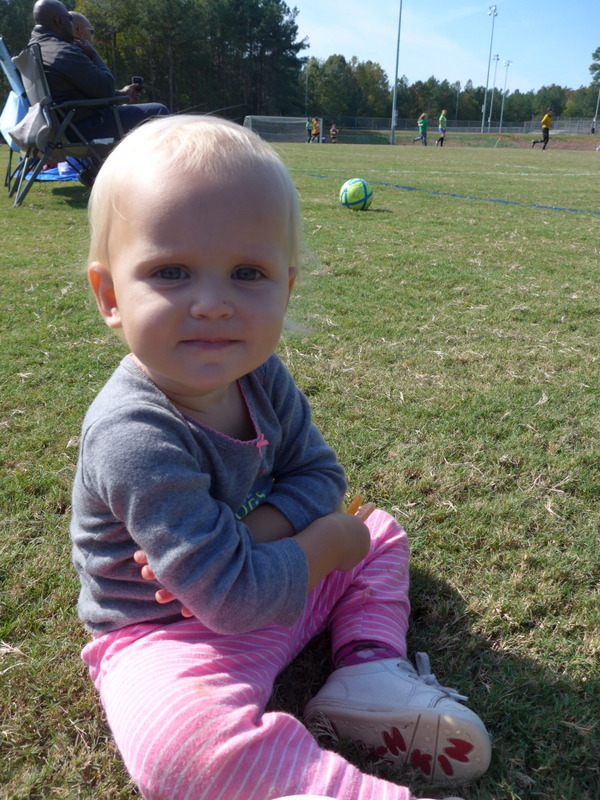