To pick up where Rachel left off, and perhaps to offer a little more background, on our drive back from DC we stopped at Jamestown to do some exploring. We had to use up the rest of the passes to Yorktown/Jamestown that we'd purchased, so off to Jamestown Settlement we went.

The Powhatan camp was, truthfully, a little awkward. There were a bunch of retired school teachers playing the role of Native American women...but they were very obviously not Native American...and the whole thing smacked a bit of orientalism. It was fun for the children, for sure, and it was interesting to get to walk through the houses. But the actors (or "historical interpreters") were a bit much for us.

(To be fair, we also steered clear of the "historical interpreters" at the colonial village (and probably would have avoided them on the boat as well except that we were....you know...stuck on a boat)).

One tour guide (not an actor) said, and I quote, "We don't really know what these [totems] are for because it's like some big secret or something and 'The Indians' don't like to share their secrets with us."

That made my eyes bulge out a little bit. First of all, she was an actual employed tour guide. Second of all, way to "otherize" another culture. Third of all, it's not a huge secret, really. According to the Powhatan Museum: "Powhatan totems were thought to be carved portraits of important people. They were never worshiped but represented the location of the ceremonial dance area."

Anyway, next in our little tour of Jamestown Settlement was a stop at the harbour. Our first thought when we saw the ships was that they were much smaller than we'd expected. But apparently they are to-scale replicas. It makes me sick of thinking about getting into the bottom of this ship with 50 other passengers and staying down there while we sailed for weeks and weeks. I felt crowded enough going down there with a handful of other tourists—and that was without any cargo taking up space!


Here's Benjamin taking a nap in a fancy bed: 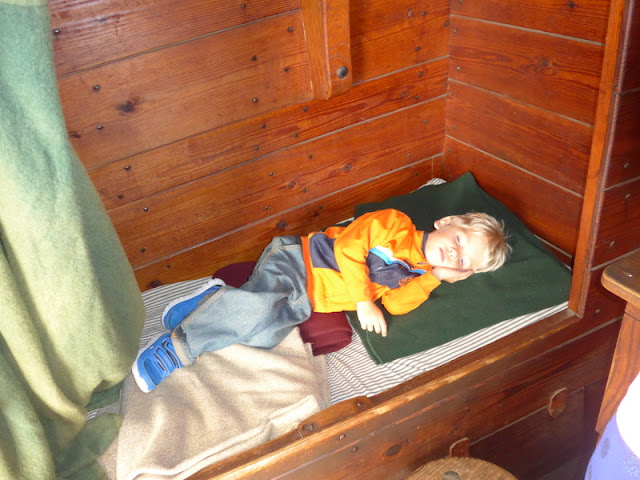 And here's Rachel puttering around in the kitchen: 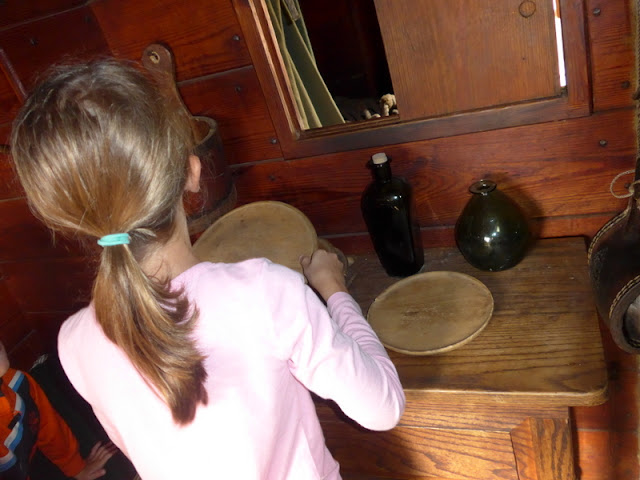 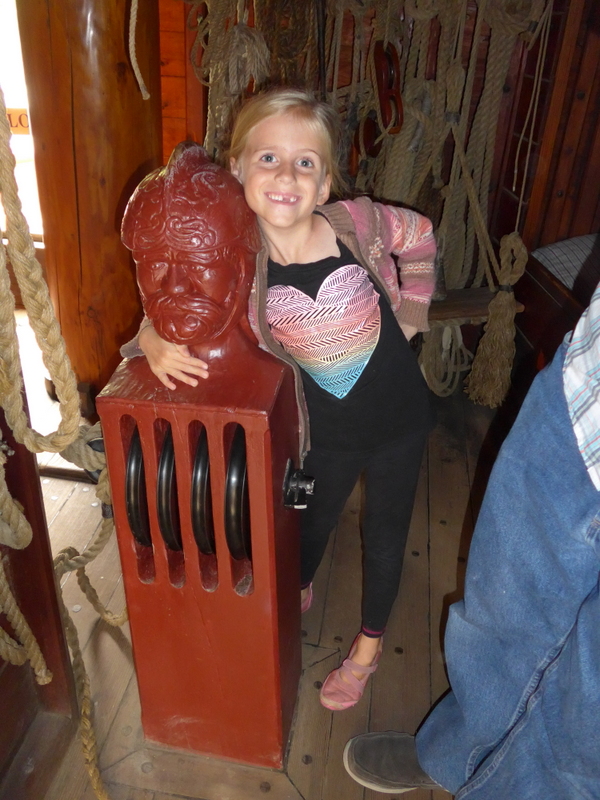 Here we are exploring the bottom of the Susan Constant. Benjamin was drawn to the cannons, of course. 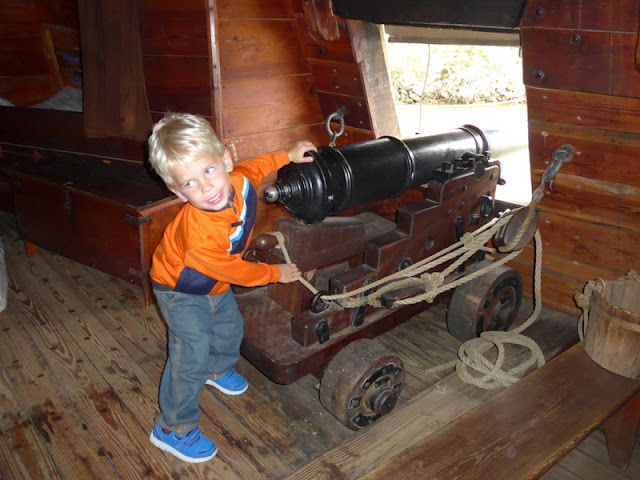 And anything that Benjamin's interested in Zoë is interested in. She knows that a duck says quack, a cow says moo, a cat says meow, a dog say arf, a horse says neigh, a snake says hiss, and a cannon goes "kishshshsh" when it explodes. 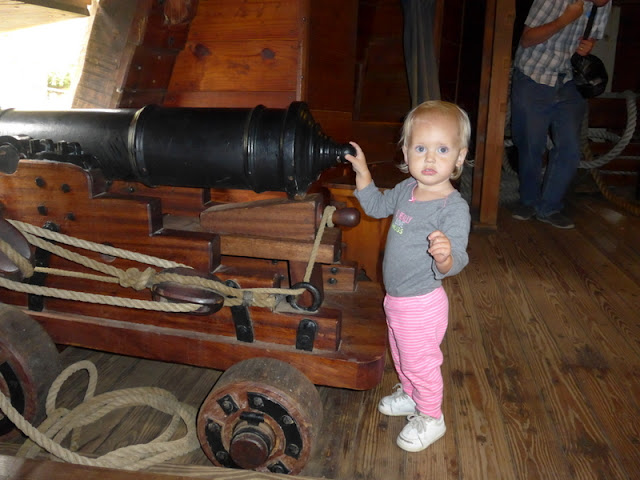 Here's Benjamin pretending to light a cannon with a botefeux: 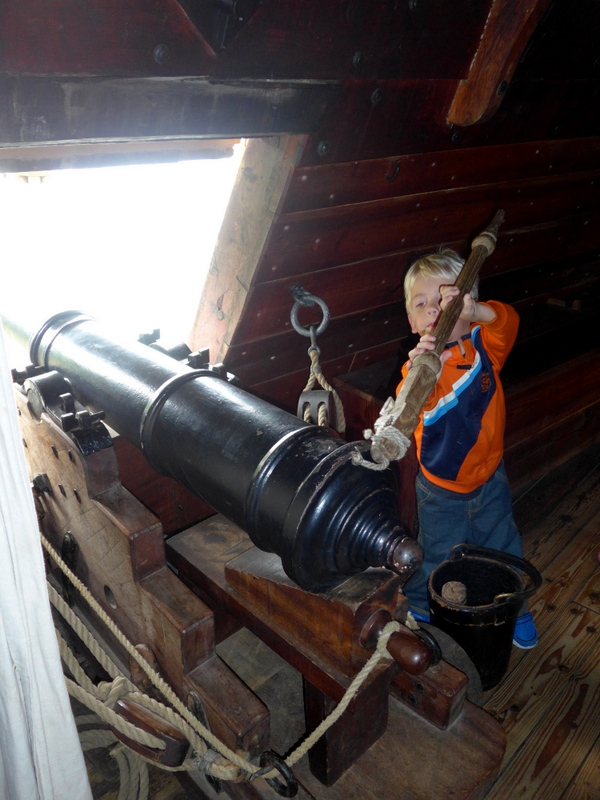 Zoë enjoyed finding and climbing all the ladders she could: 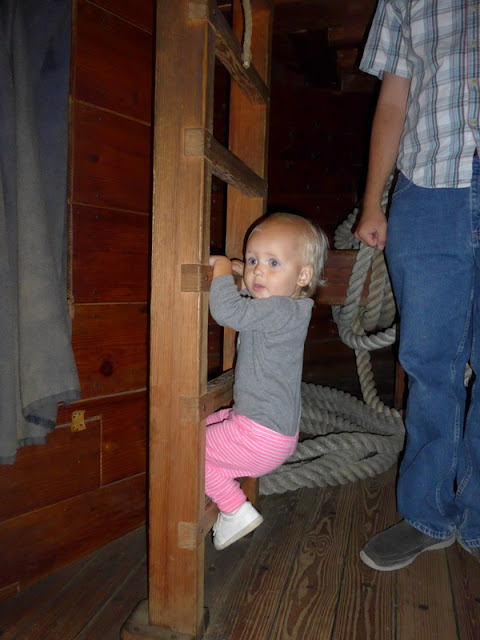 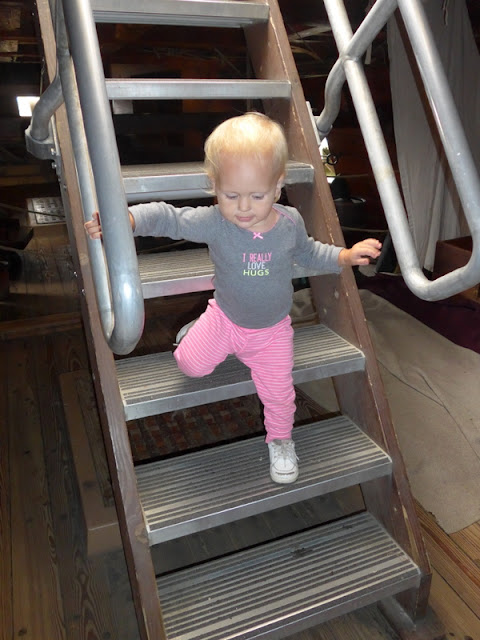 I had to pull her off the stairs once so some people could get by and she threw a lovely tantrum: 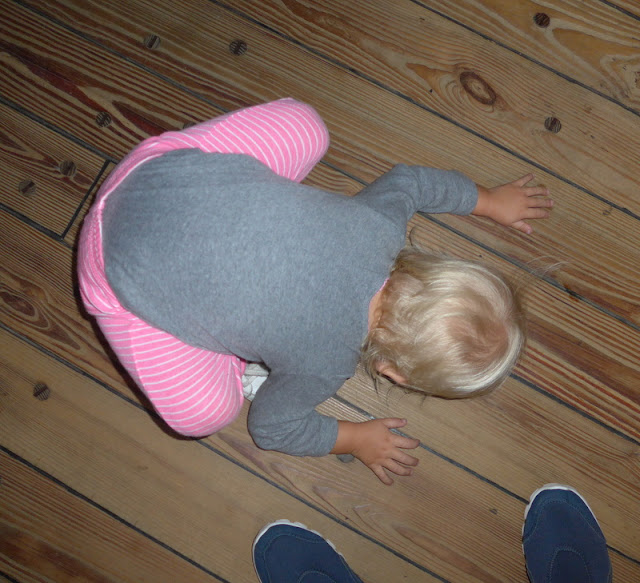 Here we are at the bow of the ship: 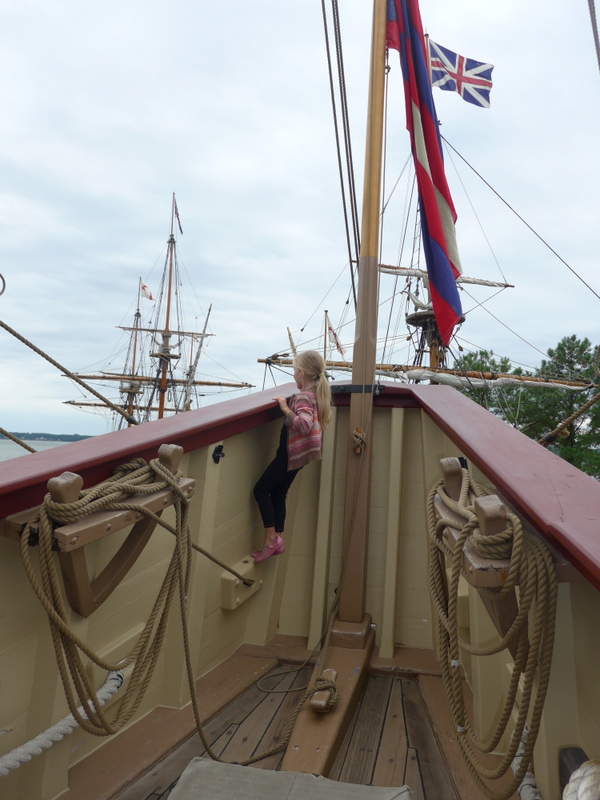 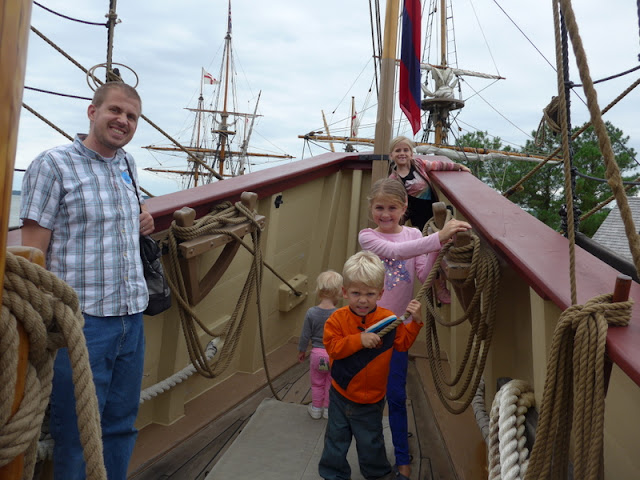 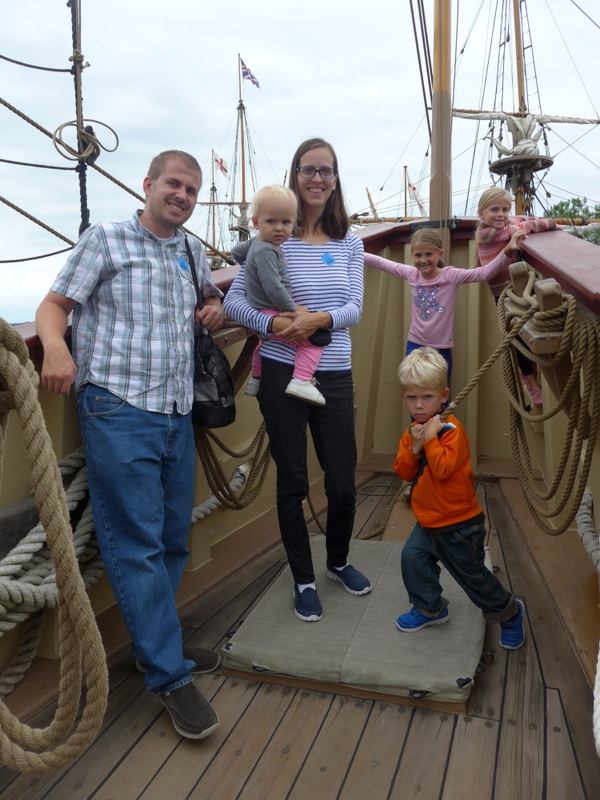 And here we are in the captain's balcony: 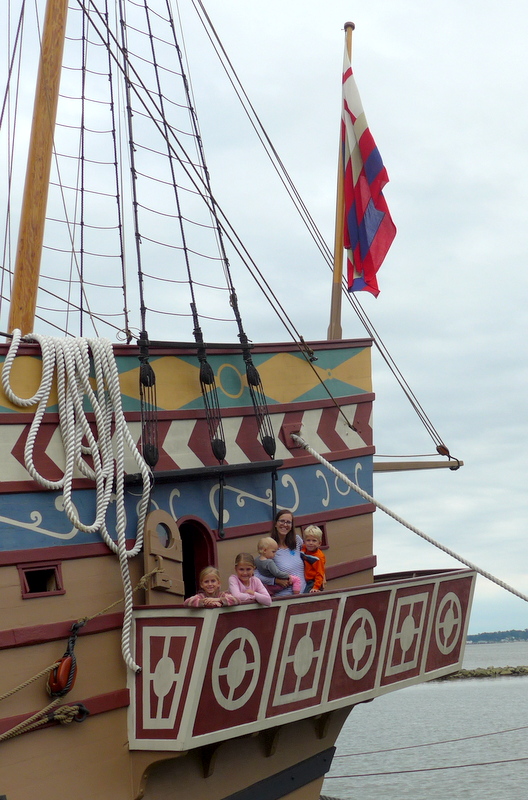 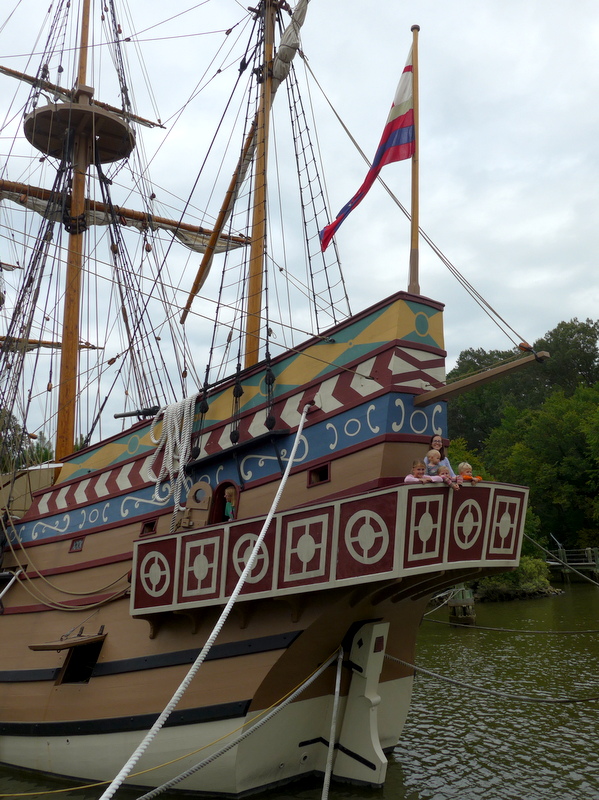 Zoë was not happy when we disembarked and we had to give her some time to mourn before we could move on to the new British colony: We finally made it to the colony and quickly got down to business. Closing time was quickly approaching and we still had so much to do!

Most of us enjoyed trying on the armour: 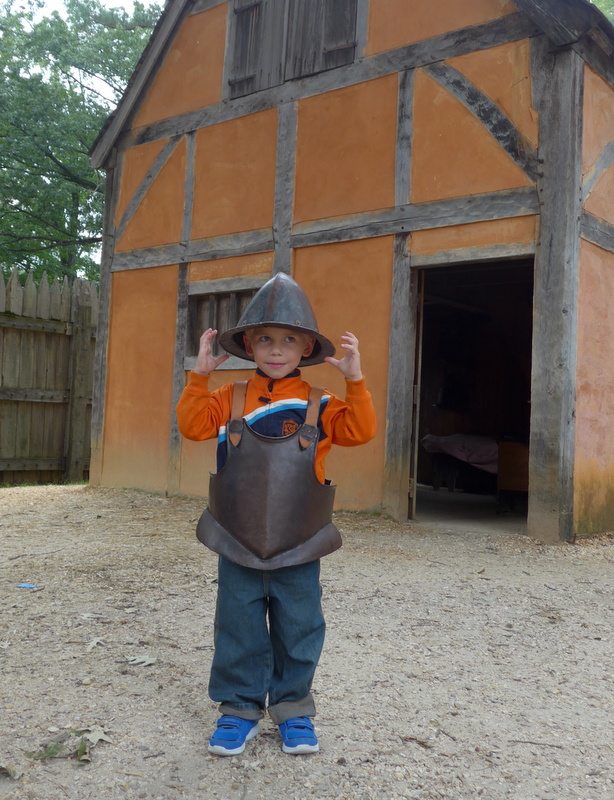 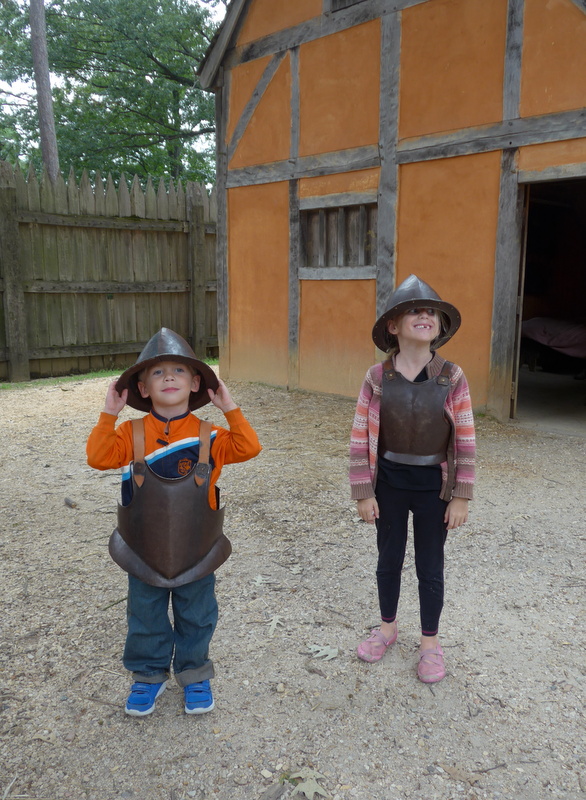 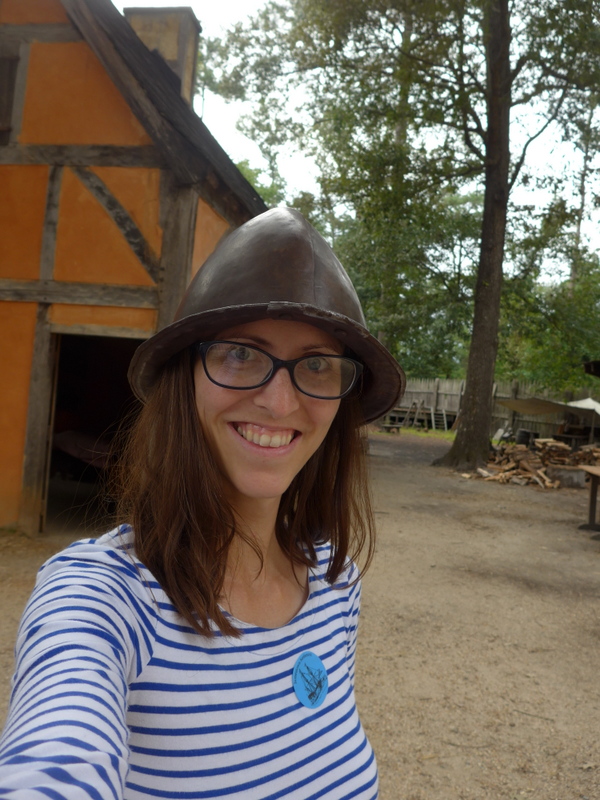 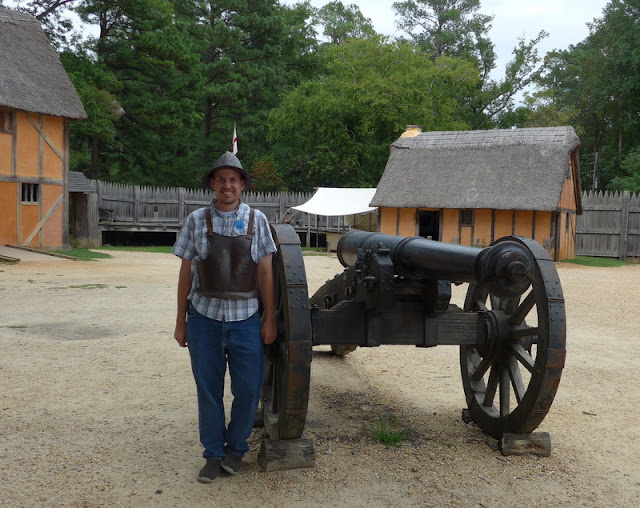 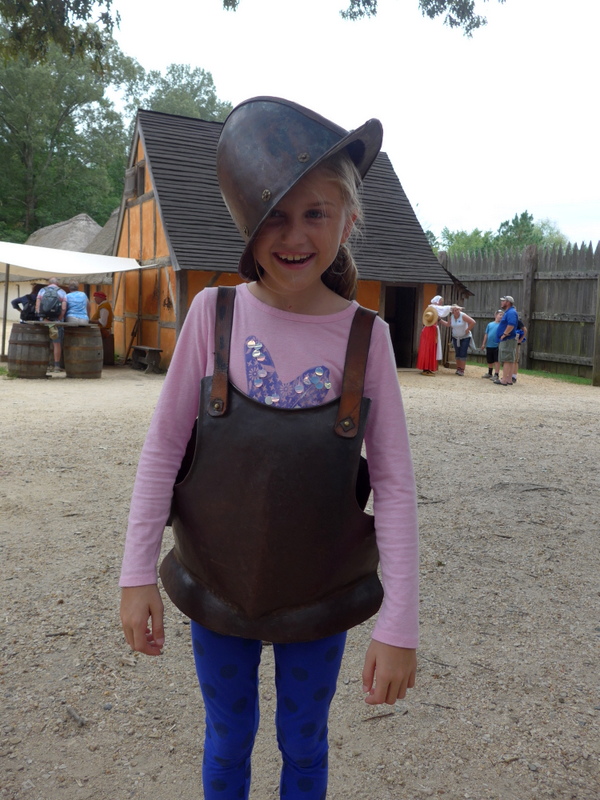 Zoë thought the helmet was alright (though you can see her face is all snotty and tear-stained from her tantrum about leaving the boats): 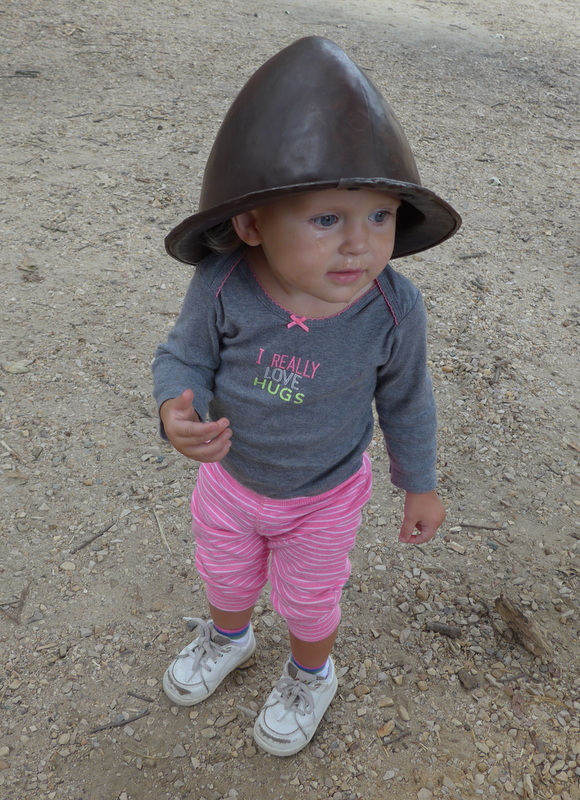 The breastplate, however, was just too much: 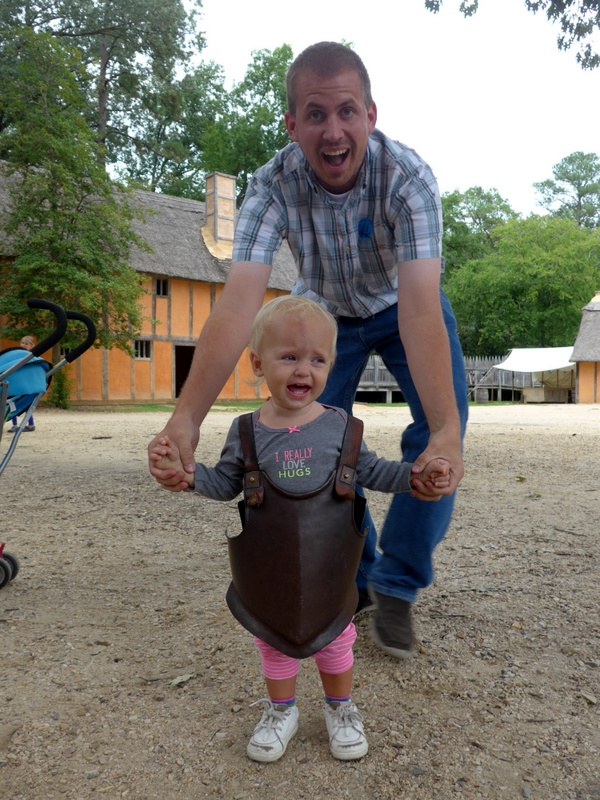 Sometimes when we try to do fun things with our children they make us feel like we're actually torturing them (and to be honest, by this point it probably was torture; poor Zoë was completely ready to be in her own home, with her own stuff, with her own schedule). 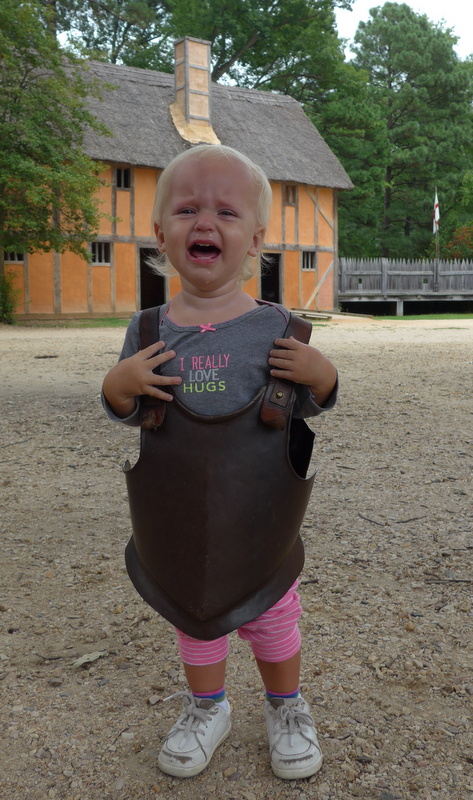 Benjamin happily declared, "If I was a person living here, this would be my job!" while he stirred a pot of laundry. 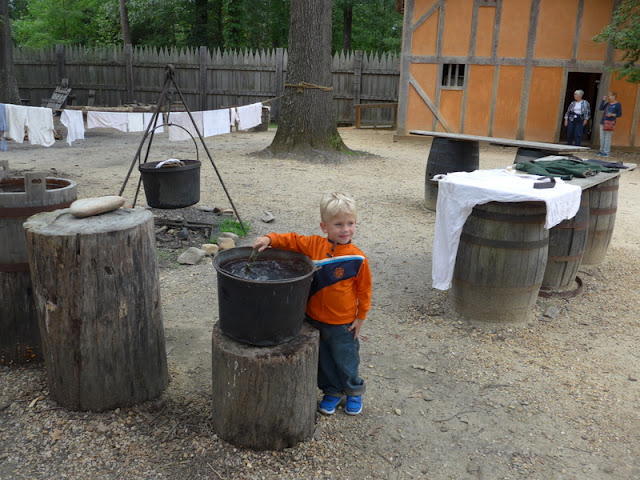 This dining room table was enjoyed by all the kids, but most especially by Zoë. I stayed at this house with her so that she could play with the dishes for a while and by the time I coaxed her away from it the rest of our family was nowhere in sight. Fortunately, I was able to follow the sound of Benjamin's voice (that kid is loud) and we found everybody in a different house. 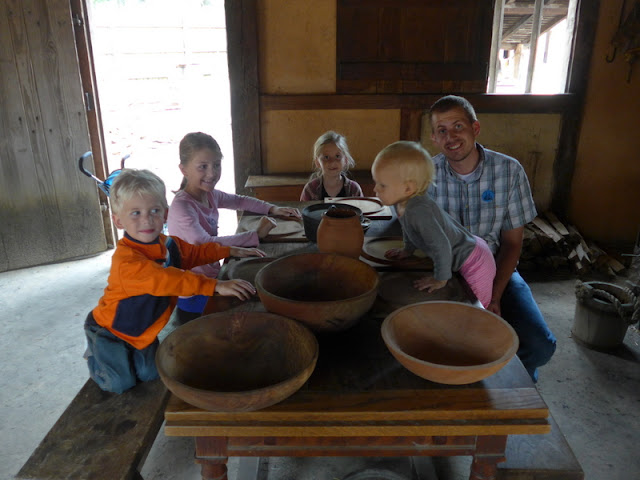 There was more armour to try on: 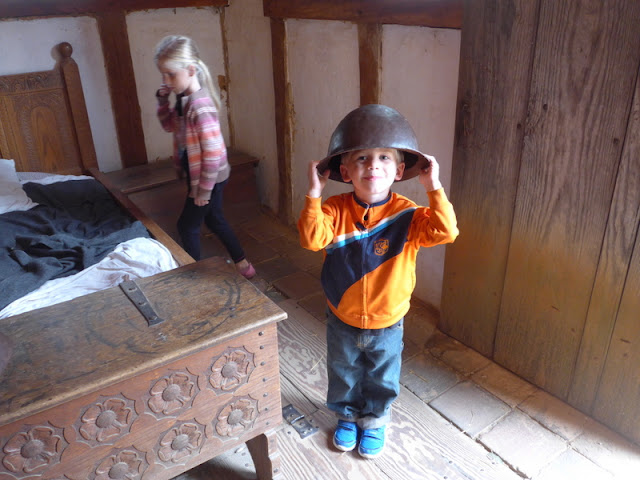 And beds to try out: 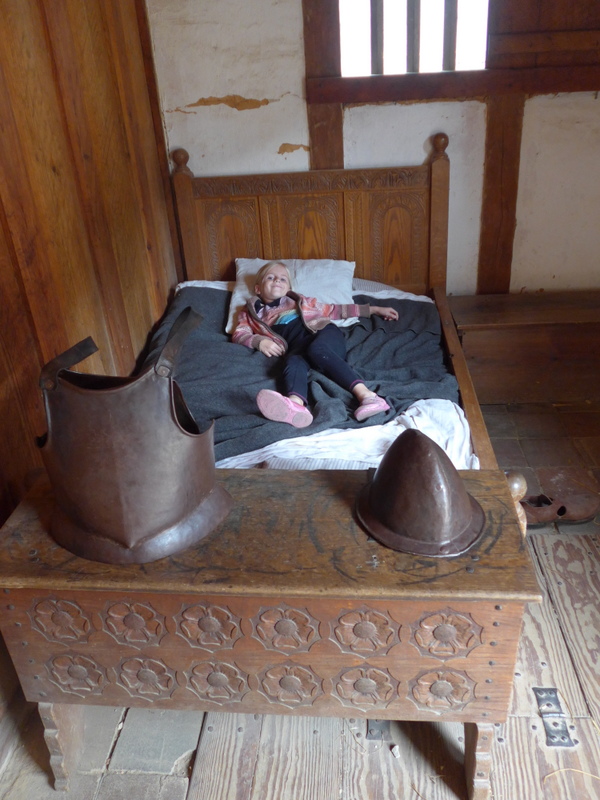 Here's Andrew and Rachel checking out the thatch roof: 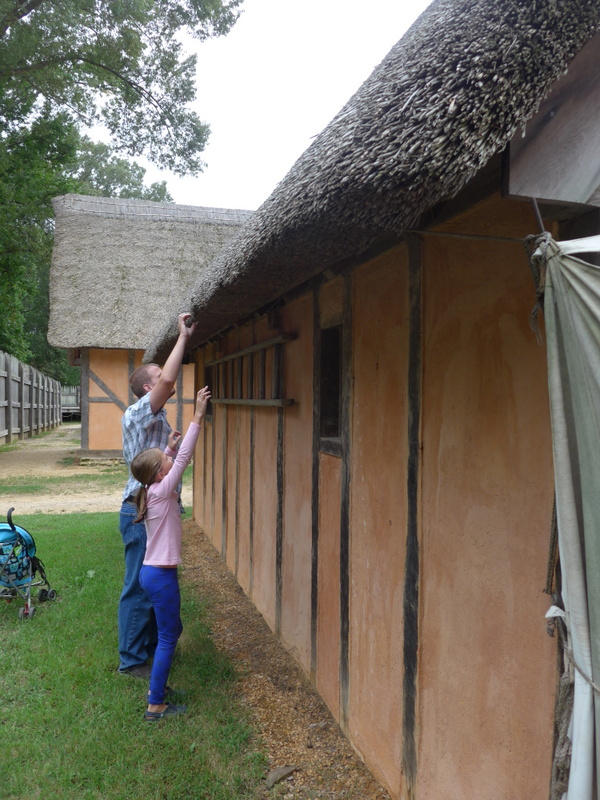 And here's Zoë looking out of the wall of the fort: 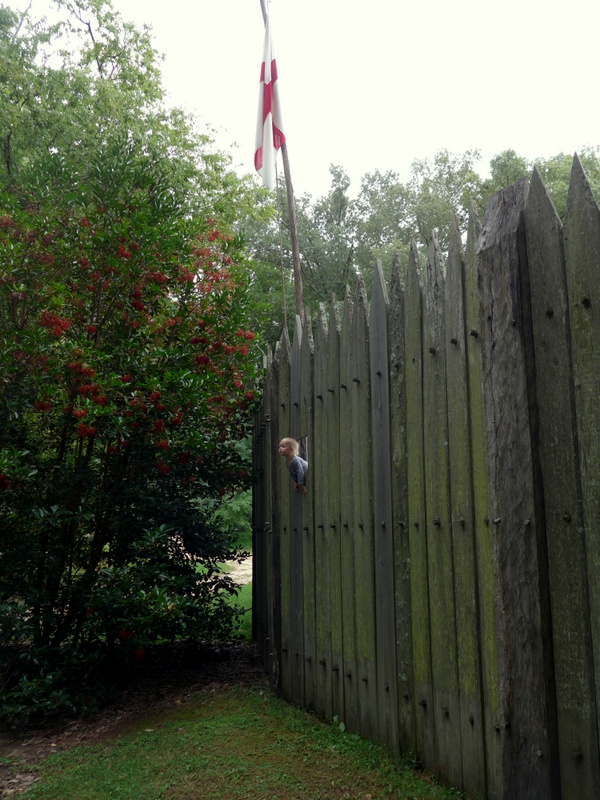 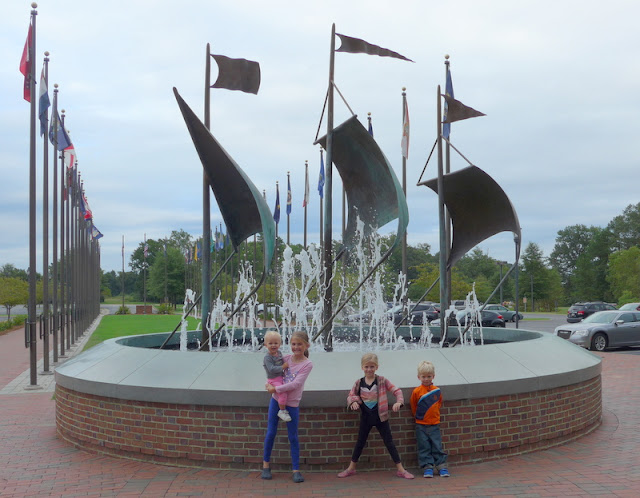 And that concludes my commentary on our trip to DC. Finally!
Posted by Nancy at 11:24 PM