On Friday morning we were just getting ready to head out the door to go to the Museum of Life and Science with Rosie when I got a text from Miriam's teacher saying that Miriam didn't feel well and wanted to come home—her ears were bothering her. So instead of heading to the museum we headed to school where we found Miriam playing with her friends, seemingly fine.

We've had a cold at our house, it's true, but we're all (mostly) over it. Some lingering side effects seem to be an abnormal amount of ear popping (which can be uncomfortable), a bit of a stuffy (though no longer runny) nose, and, for me, laryngitis (because I can't get sick without getting laryngitis). I'm sure Miriam was experiencing ear popping at school and just didn't know how to handle it, because she wasn't really acting sick at all.

I had such a terrible time deciding what to do. Selfishly, I didn't really want to bring a sick child home to just sit around the house doing nothing (Rosie was with us for such a short time!) but I also didn't want to leave a sick child at school. Miriam didn't seem sick at all (no fever, no cough, no runny nose, no throwing up) but insisted that she wanted to come home. Andrew said that we should just take Miriam to the museum with us, but I didn't want to set up that sort of precedent—at our house if you come home sick you have to be sick for the rest of the day so there's no going outside to play with friends or going to Halloween parties in the evenings or anything. Besides, if we'd done that I imagine Rachel would have felt really left out.

In the end we made a deal with Miriam: if she could stick through the next three hours at school, I would pick them up at the end of the day. That way we'd still get to go out during the day and she'd still get to go to the ward Halloween party but wouldn't have to suffer through an hour-long bus ride.

When we got to the museum, however, both parking lots were completely packed. There were no free spaces in the regular lot and there were no free spaces in the overflow parking. So instead we headed next-door to Rock Quarry Park where Rosie and I chatted while we watched Zoë and Benjamin play. Rosie also pushed Benjamin in the swing for quite a while—this boy is a marathon swinger. 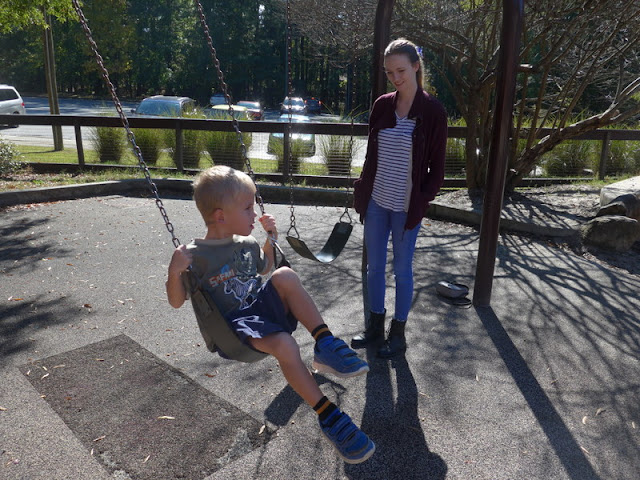 There were tiny little acorns scattered all over the path but I could not figure out where they were coming from because there were no oak trees around that I could see. Oak leaves are fairly iconic, making oak trees pretty easy to spot, right? But the acorns really were coming from the trees above us, none of which had oak leaves.

Apparently there are over sixty species of oak—including an evergreen—though, so oak trees come in  many forms. What we were looking at was a willow oak. It had long, slender leaves like a willow tree...but acorns like an oak tree. We were happy to solve that mystery (I was probably happier about it than Rosie was because I have this thing about identifying plants and bugs; I just can't help myself).

We took Rosie for a walk on the Bronto Trail, which is a city trail running past the museum's old dinosaur walk. The only dinosaur left is a brontosaurus, hence the name of the trail. Here are the kids pretending to be dinosaurs in front of the brontosaurus: 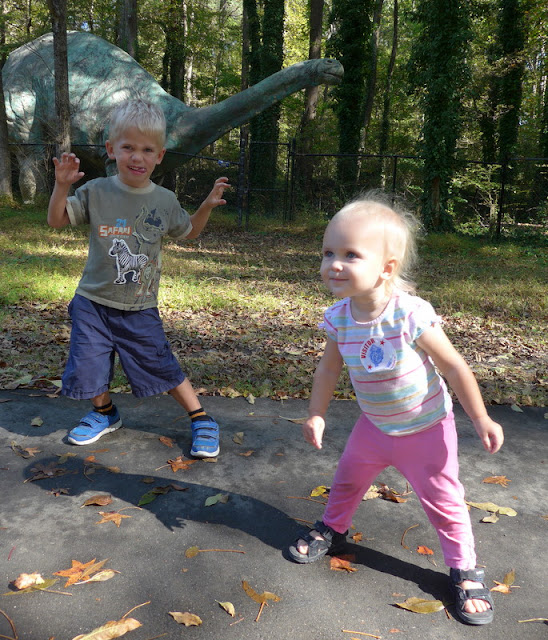 And here's Rosie joining in the fun: 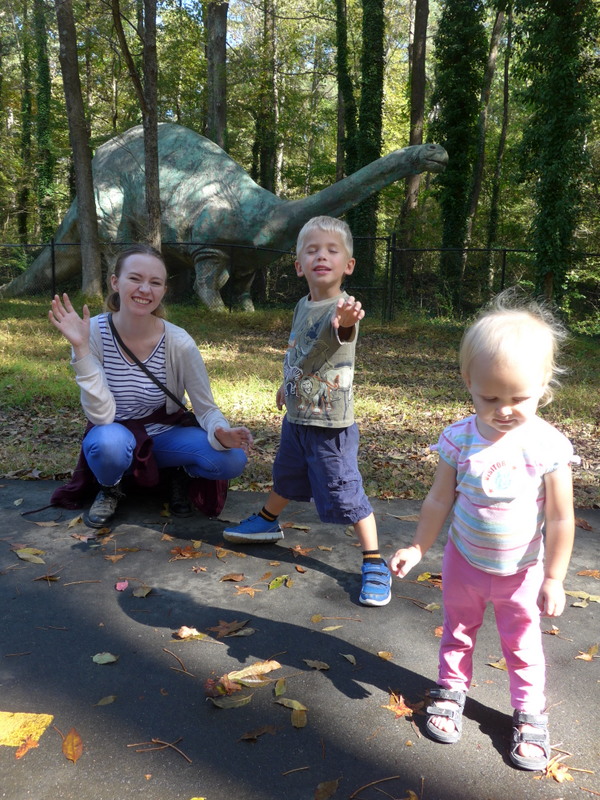 By the time we'd done all of that it was about 1:00 so we tried the museum again and this time found plenty of parking spots available (there's usually a mass exodus in the early afternoon as families head out for lunch and nap time). We headed into the museum to give Rosie a small taste of the museum.

At the front desk they asked me if I'd heard about the $14 million bond for the museum and if I'd consider voting yes. Among other things, the museum would like to put in a parking garage to accommodate more patrons, which I thought was a timely issue to bring up with me since just that morning we'd been unable to find parking. They're also hoping to enlarge the whole campus (both the building, to make room for more inside exhibits, and the outside exhibits), which would be good if they're planning on putting in more parking.

I, personally, enjoy the museum more on quiet days than I do on busy days. Not being able to find a parking spot is a good clue for me that I probably will be overwhelmed by crowds at the museum.

So I guess I kind of have mixed feelings about the bond. I think the museum is awesome, but I kind of don't want them to accommodate more people because it's often crowded enough as it is.

But a field trip entrance?! That would be amazing!

Anyway...we managed to take Rosie through the NC Wildlife exhibit and the farm before we had to go pick the girls up from school. Here's Zoë and Rosie watching a snake: 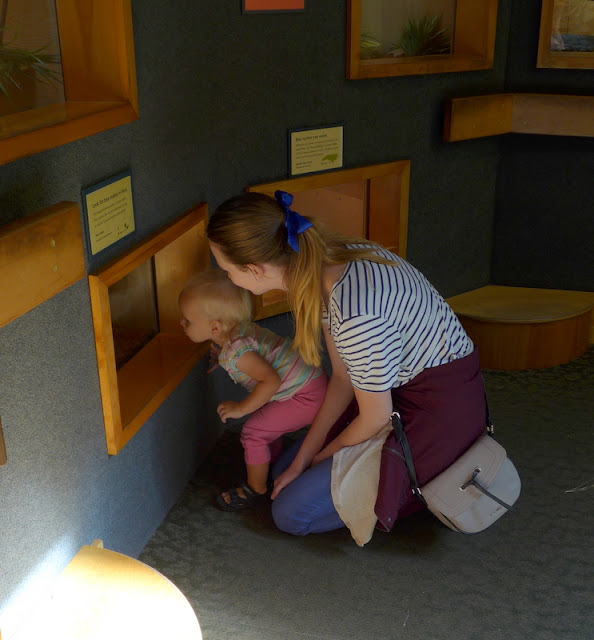 And here's Benjamin and Rosie keeping it dirty with the Durham Bull: 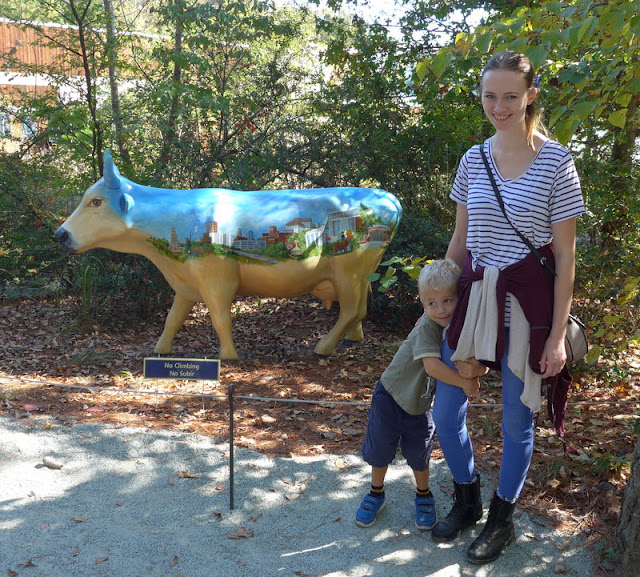 After school we only managed to fiddle with costumes and (barely) fix dinner before heading out for the church Halloween party. This year we had a Monster Ball instead of our traditional Halloween carnival and it was awesome. I was so excited because I'd been trying to convince people for years to hold a family dance. When I was in the primary presidency we were in charge of the Easter party I lobbied so hard for a "Bunny Sock Hop" instead of our traditional Easter Egg Hunt. Easter Egg Hunts are fun, but they're over in, like, two seconds. And only people with little kids come when it would, hopefully, include everyone.

One year, with mixed results, we did do a dinner and an Easter play with the egg hunt. The next year "we" decided to just go back to an early morning egg hunt with donuts and juice (though I still lobbied for the sock hop—c'mon, guys!) because the play had been too much work and still didn't bring out a huge crowd.

"Family dances are fun!" I argued, but no one went for my idea.

"What songs would you even play for an Easter dance?" someone asked, rolling their eyes.

Ummm...the possibilities are endless and there's a lady in our ward who loves to DJ things so I'm sure she'd figure something out but just off the top of my head, for starters, I'd say The Bunny Hop and The Chicken Dance. Those are the obvious classics. But there's more. So. Much. More.

"Let's go with what we know works," everyone said.

I still find this odd because I know the then-primary-president loves dancing just as much, if not more, than I do (probably more if we're being honest). I thought for sure she'd jump on board and help me argue my case to win over the rest of the presidency. I even suggested having a half hour pre-dance where we could teach people some basic cha-cha or swing or waltz or something (because we were both ballroom dancers in our heyday). But, alas. It was just me rocking the boat while everyone else did their best to keep it on a steady course. Easter Egg Hunt it was. Fine. Not that I'm bitter.

So I was so happy that someone else managed to accomplish what I could not (that'd be April—you go, girl!) because it was a blast!

Here are the kids all ready for the evening: 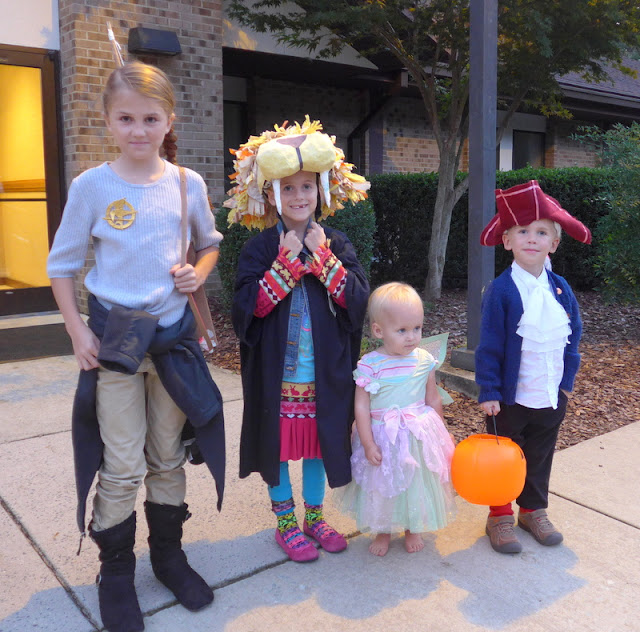 Rachel went as Katniss, Miriam as Luna, Zoë as Tinkerbell this time, and Benjamin as George Washington. Rachel went with tan pants and I braided some yarn into her hair to extend the length. We forgot to tuck Benjamin's pants into his socks. Miriam forgot her scarf, but was recognized right away by the sister missionaries, and Zoë hated her wings until I pinned them to the back of her shirt instead of trying to get her to wear the straps around her arms. 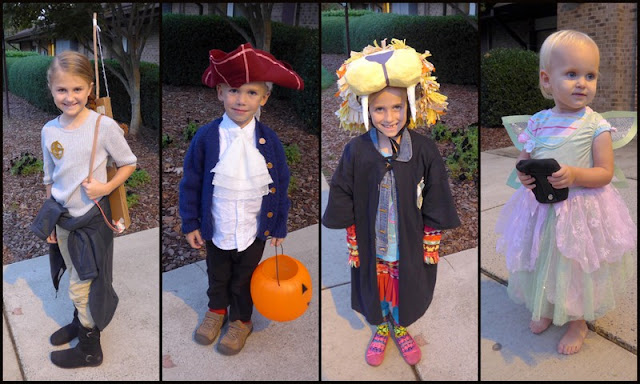 Inside a man in the ward had set up a little photo booth and was taking pictures of everyone. Here's ours: 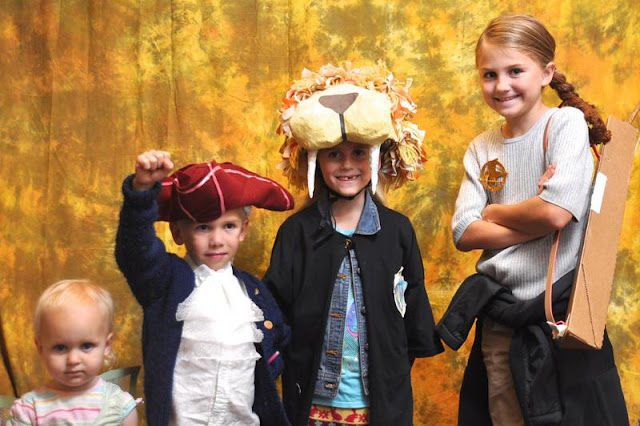 The dance was a lot of fun. We did some group dances and played some games. Here are Rachel (the gray blur) and Miriam (the blur in pink and black beside her) pretending to be dinosaurs with their friends while we were playing a "Walk Like A..." game: 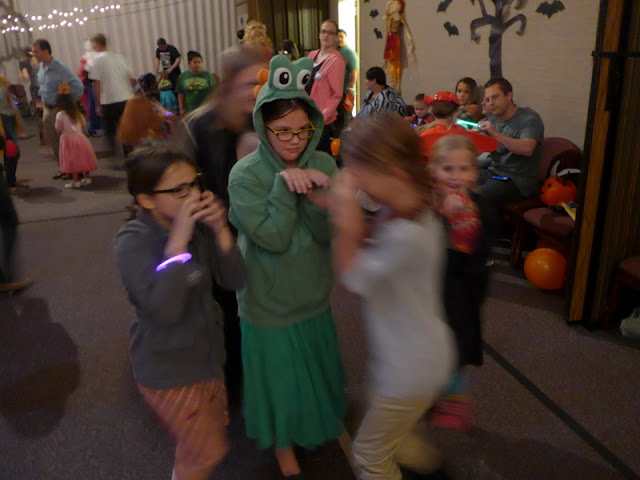 Rosie danced with Benjamin the entire evening (they're basically BFFs now) while I mostly danced with Zoë and Andrew hung out with Miriam. Rachel danced with her friends. We all had fun.

Rosie pitched right in and helped—she probably helped more than I did, truthfully, because Zoë hadn't taken a nap and was being a bit of a monster by the time we hit the dance (not to mention after the dance) and she needed her some momma snuggles. But Rosie's just awesome like that, stepping up to help wherever she can.

I'm so glad that we got to do a Monster Ball, but one day—so help me!—I'm going to get my Bunny Sock Hop for Easter.
Posted by Nancy at 11:42 AM