We arrived in DC around 8:00 at night on the 21st and were all so excited to be there that instead of heading straight to Amanda's house we decided to head downtown to see the sights. We parked by Potomac River, which was p-totally awesome (the 'puh-tuh' thing carried on through the whole p-trip (because, as our children would be happy to tell you, we're nerds)). The kids were all very impressed with how many planes and helicopters flew overhead, just while we were standing on the sidewalk.

We walked over to the Lincoln Memorial first and took some terrible-quality pictures. But though the pictures are sub-par, the night was wonderful. Seeing the monuments all lit up at night is pretty amazing.

Here's Miriam with the Washington Monument behind her: 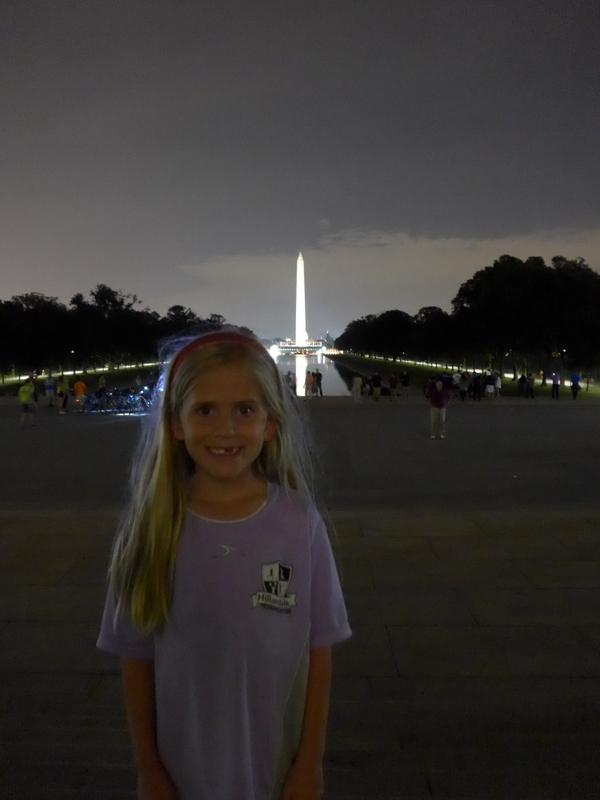 Here's Benjamin in front of Lincoln: 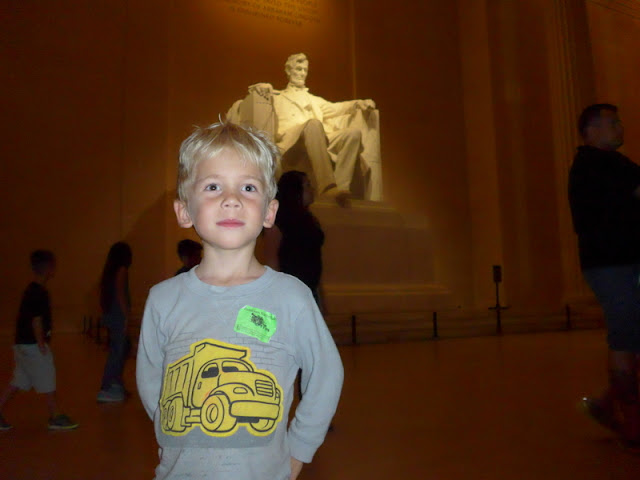 And Rachel in front of Lincoln: 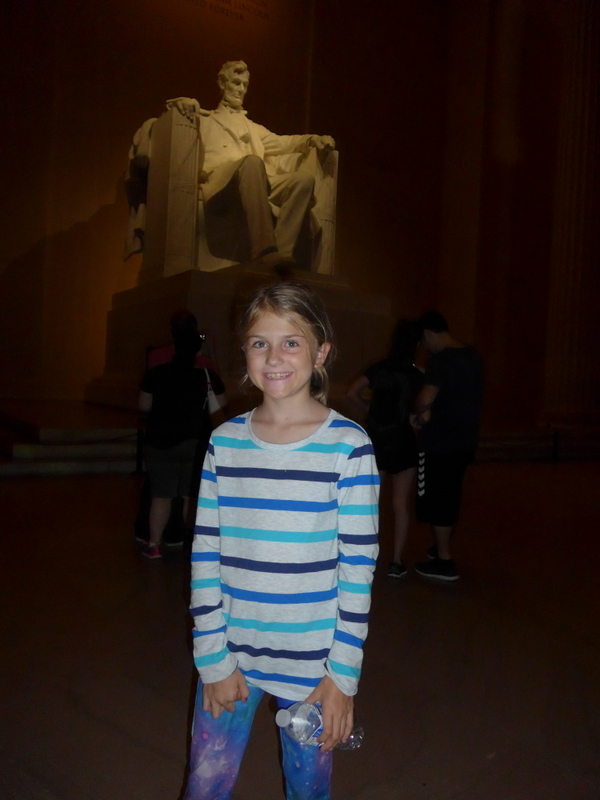 There are no pictures of Zoë because she hadn't yet caught onto the magic of DC and was alternating between cowering behind my legs and poking her head out to scream at the statue of Lincoln. She was not a fan of statues the whole time we were in DC, truthfully.

As we were leaving the Lincoln Memorial something scurried right in front of my path before disappearing into the grass.

"What?" everyone wanted to know.

"Rats!" I hissed. "There are rats running all over the place! Look! There's another one!"

Ah, the magic of DC!

Poor Miriam was suddenly terrified to place foot on the grass and refused to even get close to the edge of the sidewalk (though it's so bright in this photograph that she forgot her fear for a moment and gave up her dead-center-of-the-sidewalk position (they were setting up for a festival to mark the opening of the National Museum of African American History and Culture)). 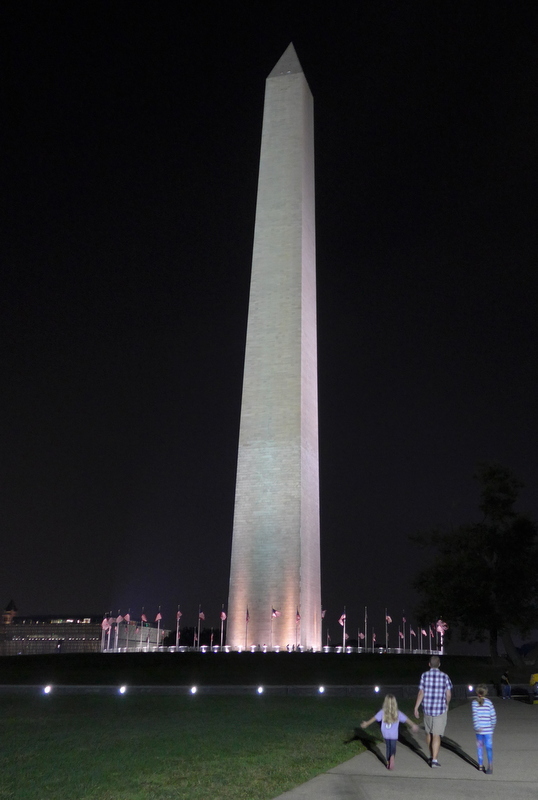 Just for fun, Andrew and I opened up PokemonGo to see what the DC map looks like. It's teeming with Pokestops and Gyms and anything else you could imagine, but our battery power was a precious commodity. We only used our phones for essential communication and navigation this trip. I can't even imagine how many Pokestops we passed by.

Anyway, this prompted the kids to associate regular, ordinary sewer rats (or, in this case, monument rats) with Rattata, a small rodent Pokemon.

"There's a Rattata!" one would call out.

"Quick! Throw a Pokeball!" another would yell.

Hey, look! We made it to the Washington Monument! 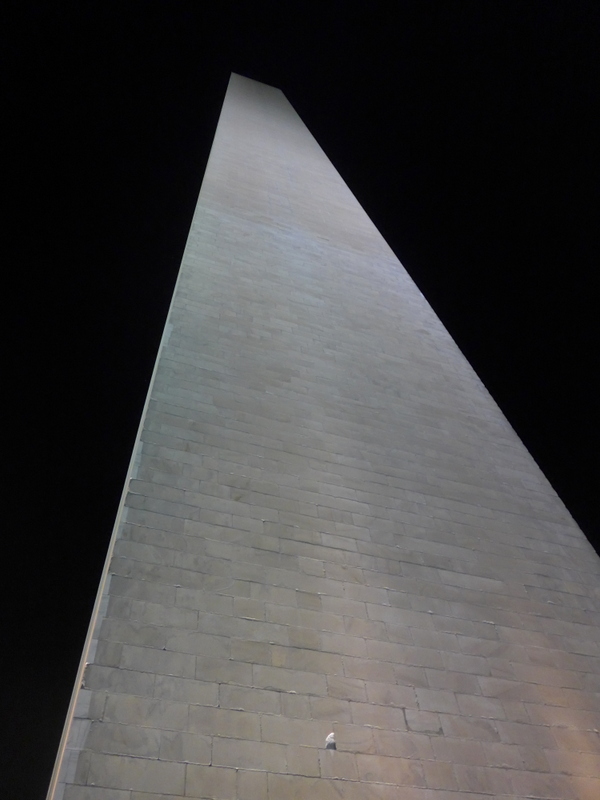 Zoë quickly became a pro at lining up for photographs this trip. She'd happily find her place in line by her siblings and would (sometimes) even smile for the camera. It was pretty cute to watch her dash into photographs. She even started ignoring scary statues in favour of being in a photo. 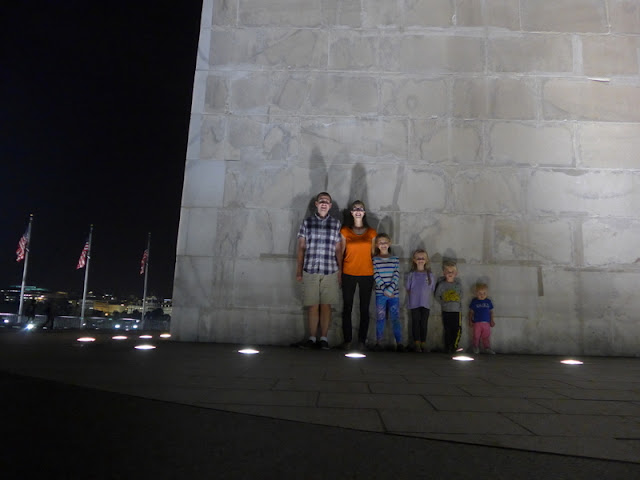 The Washington Monument was pretty empty compared to the Lincoln Memorial so we stayed for a bit. We lay on our backs and looked up at the tip of the obelisk and beyond to the sky for a bit before we decided to call it a night. That still meant we had to walk back to our car, which was parked about a mile and a half away. The kids were pretty tired by the time we got there.

And then we had to go get the house key from Amanda. She was at rehearsal for Man of La Mancha, which she was the choreographer for, and her husband was at work, which meant we had to let ourselves in. We only got a little bit lost trying to find her place (in our defence we hadn't been to her house for about four years—and it was so nice of her to let us take advantage of her hospitality both times (the first time she had just moved in and was preparing to get married and this time she's preparing to move; we were her bookend visitors, I guess)) before we were able to tuck our worn-out children into their nice, cozy...sleeping bags on the floor (Andrew and I took the bed).