Grandma leaves, Rosie arrives, we visit a plantation and attend a costume party

My niece Rosie decided to come visit us for the weekend, so when Andrew dropped his mom off at the airport early on Thursday morning he brought Rosie back with him (she picked an early flight to save him a trip to the airport). Rachel and Miriam had already left for school but Benjamin and Zoë had not yet woken up by the time Rosie arrived. They took to her like glue. 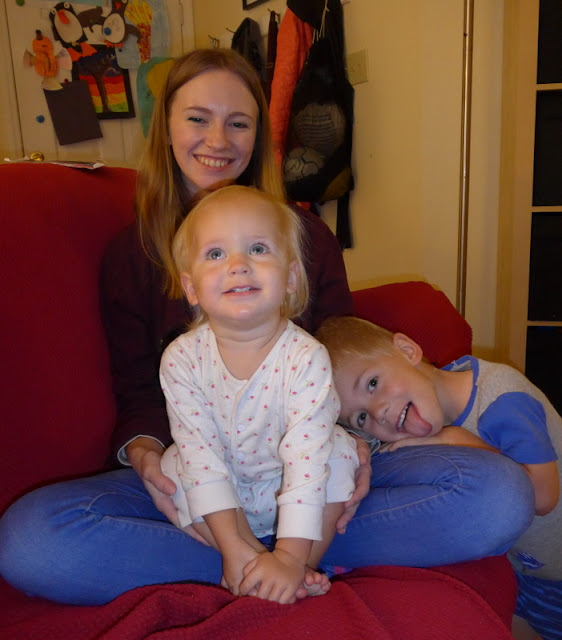 Zoë kind of approached her like, "Oh, a new stranger. Apparently this is a thing we do now." 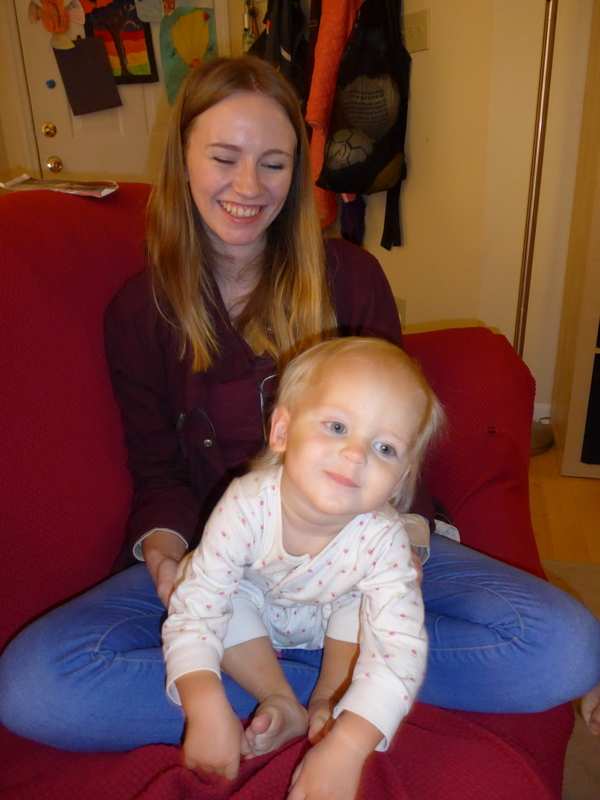 Rosie will read any story they place in her lap, which helped them decide that she was okay in their book (see what I did there?). 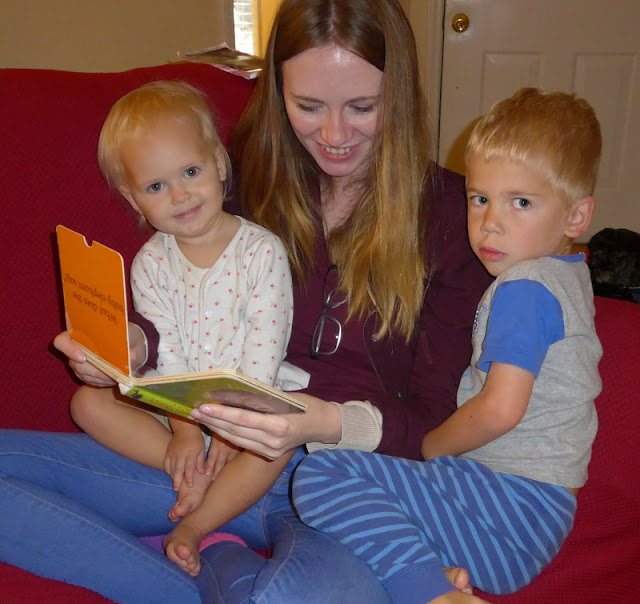 We took her to visit the Stagville Plantation that morning; we were a little early for the tour so we spent a few minutes walking around on the grounds. We found some cool fruits on the ground and guessed they were from the nearby osage orange tree (it had a label), which it was. Evidently it's more closely related to the mulberry than to oranges. 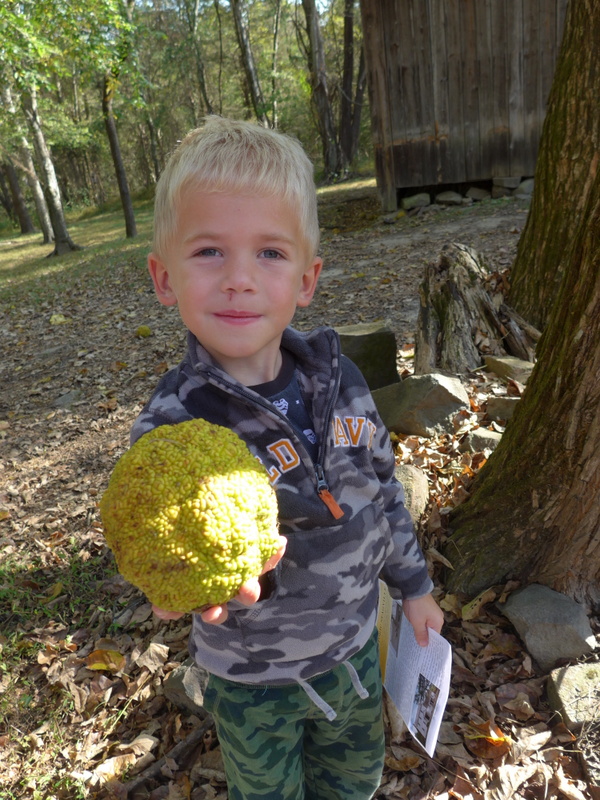 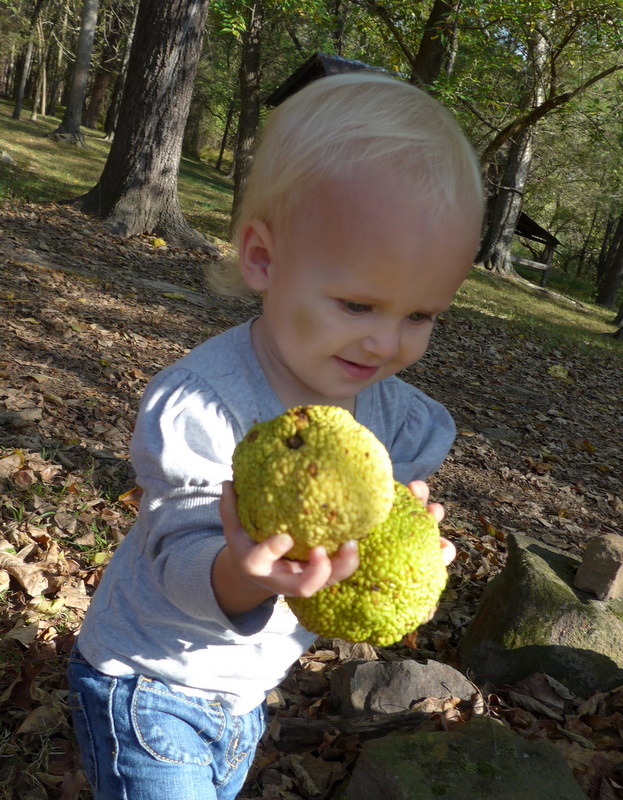 Here's Zoë exploring the foundation of an old slave cabin near the Big House: 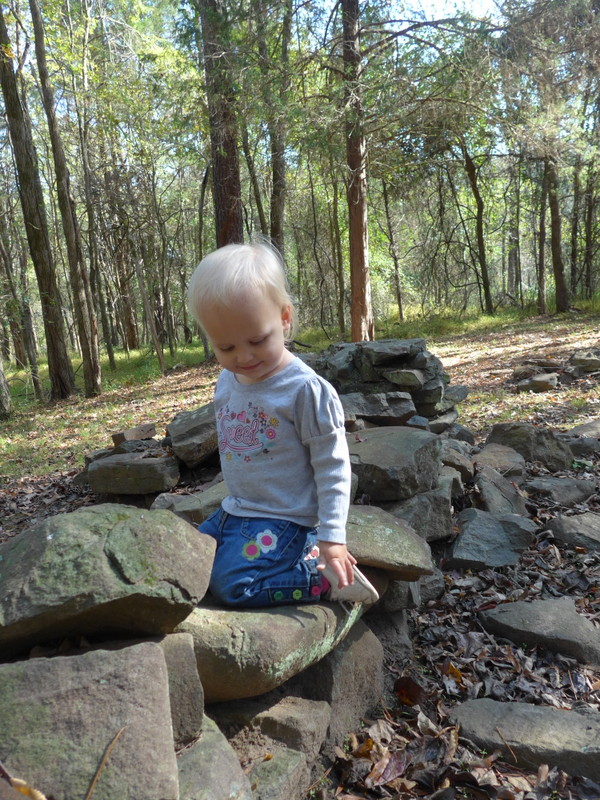 And here's Rosie and Benjamin in the master bedroom of the Big House, with a blurry ghost-Zoë in the bottom corner (spooky (she had been in the picture but decided to exit at the last minute)): 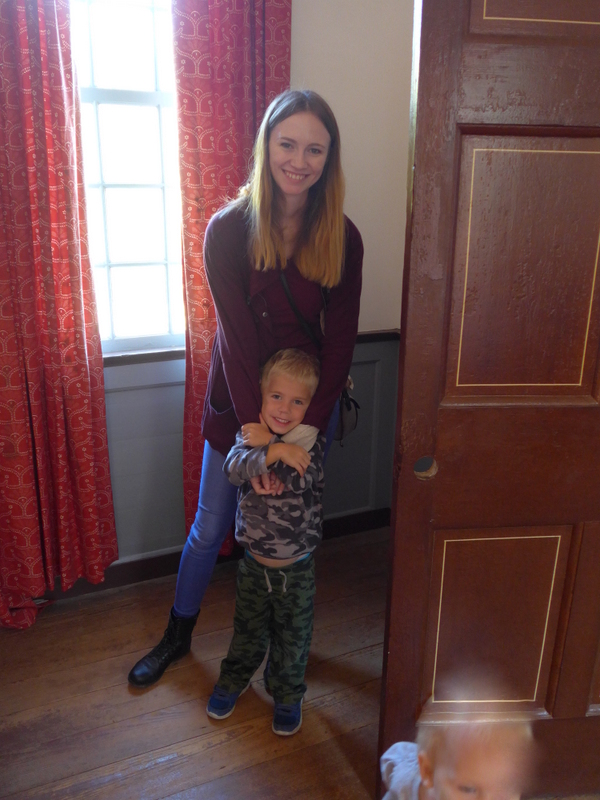 The first time we toured the house the loft/attic was in shambles, but it looks like they've completed their restoration: 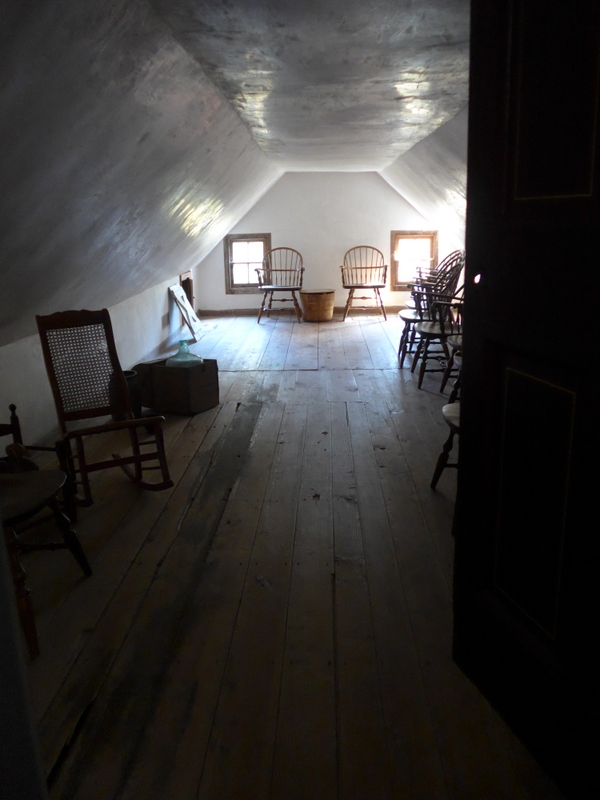 I didn't take any pictures out at the slave houses this time around, but I did take a few pictures in the Great Barn. Benjamin has claimed Rosie was his buddy and drags her all over the place (today I think he had her pushing him on the swing for a good half hour or so): The kids got filthy on the barn floor while we listened to our tour guide, who was really quite thorough (giving the kids plenty of time to get thoroughly messy): 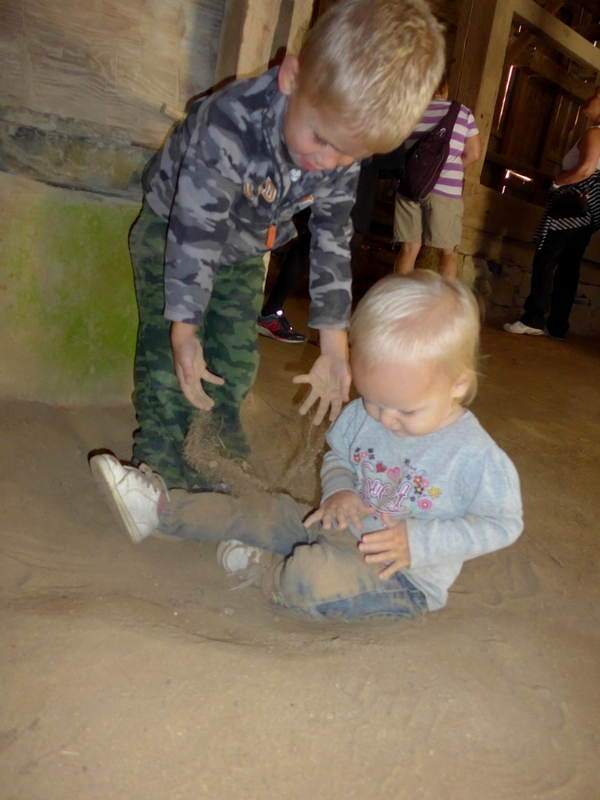 And here's a little picture outside of the barn: 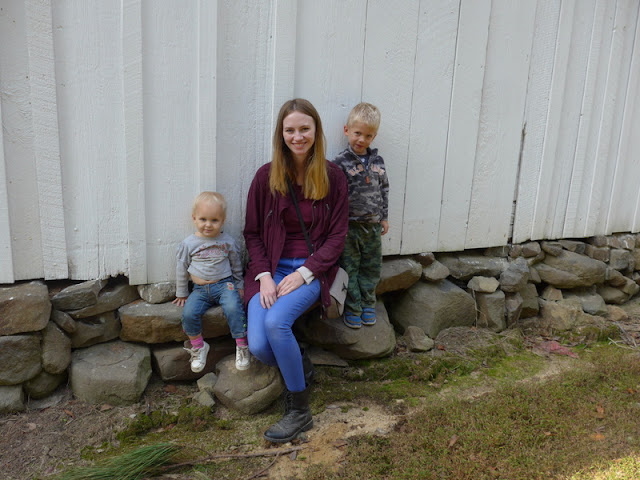 We were quite worn out by this point—from wandering around the plantation and from getting up early to catch planes and put children on buses—so we headed home for nap/quiet time. The girls were delighted to greet Rosie when they came home from school, before quickly descending into a flurry of after-school activity: snacks, piano practicing, dinner preparations, and (compounding the regular afternoon chaos) getting ready for the school Mathquerade night (a little portmanteau of math + masquerade (whoever coined that word has my utmost respect)).

Here are the kids in their costumes: 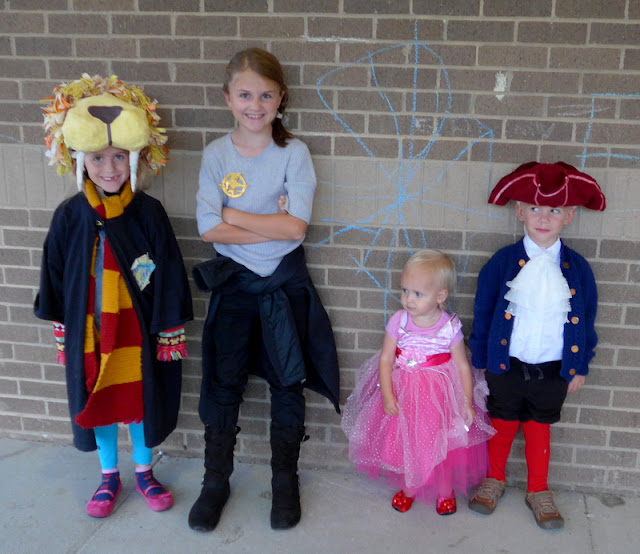 Miriam was Luna Lovegood (ready to cheer on Gryffindor at the quidditch match in the fifth Harry Potter book/movie). That hat took us a good month to make. Rachel was Katniss Everdeen, a much simpler costume, and Benjamin was thrilled to be General Washington. And we kind of forgot Zoë needed a costume at all so she got to choose random bits and pieces from the dress up box: a princess dress and ruby slippers.

I need to pull the little penguin costume out of the attic to see if she'll fit in it, but I'm kind of afraid she won't because Miriam was one when she wore it and though Benjamin was a bit older he was tiny for his age so fit into the costume no problem. Zoë's pretty tall, so I dunno...but maybe we'll try it anyway. She was happy to get to wear such a dazzling dress. She has no idea what holidays are all about yet so she's pretty easy to please.

Here are the kids getting into character a little more: 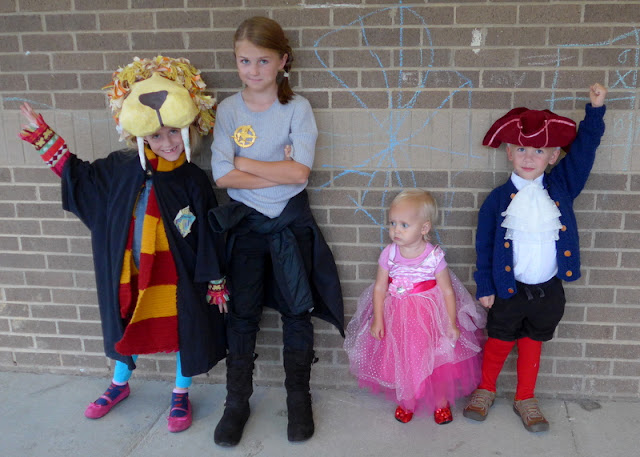 The kids wanted me to dress up so at the last minute I put turned myself into Princess Leia (Rosie took a picture of our group): 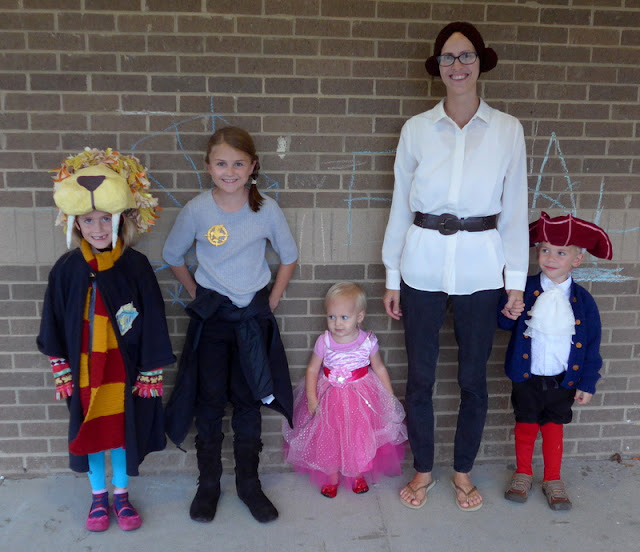 While Rachel went off with her friends in the 3–5 room, Rosie helped me wrangle the three littler ones in the K–2 room: 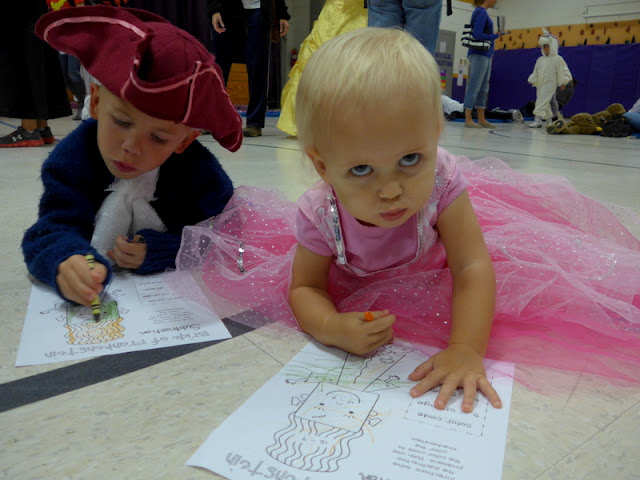 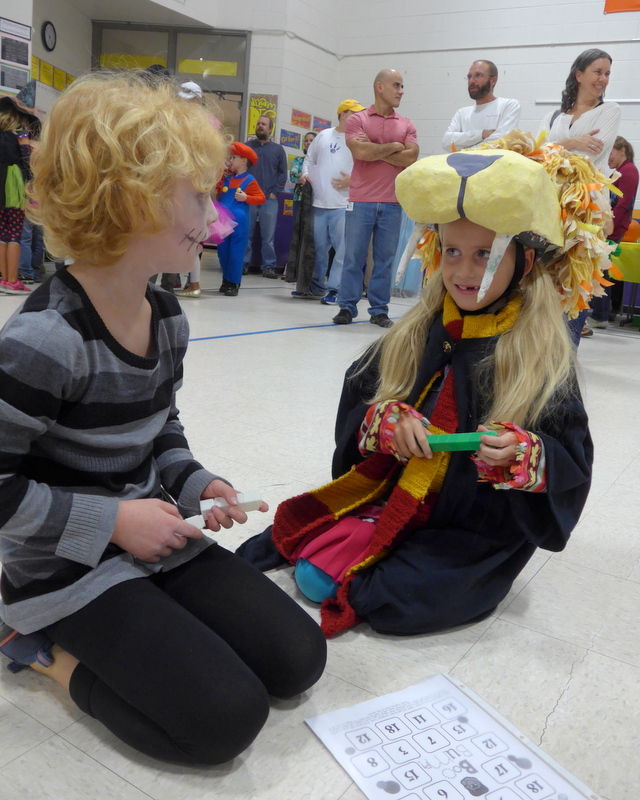 It was a pretty eventful Thursday!
Posted by Nancy at 12:46 AM