Andrew flew in from England at around 12:30 AM yesterday, after being stuck in New Jersey for a few more hours than he had originally planned and nudging his travel time to over 24 hours. Then, very unfortunately, he had to get up in the morning to run in to campus for a meeting. The most unfortunate part about this was that this meeting was actually scheduled for this morning, not yesterday, so he could have slept in a little bit!

He spent the day on campus today, came home and packed, and then Karen drove him to the airport. He's now in Columbus, Ohio for NASPAA.

I have a feeling we'll continue to sprint through life like this for quite a while.

Even with Grandma here to help, we've mostly been lying low—though we're keeping plenty busy with soccer (just a few more weeks and then we get a break)! Part of the reason we've so sluggish around here is the cold that's sweeping through our house. Benjamin has been complaining for days about how terribly sick he is (while everyone else seems to be suffering much quieter) so I mentioned something about a 'man cold' and now every chance he gets he repeats that phrase.

"My man cold is getting worse. I think I need more cough drops."

It's really not that bad of an illness and we'll all survive...but we'll also just be at home, I think.

Here are some completely unrelated pictures to Andrew's travels: life on the home front, if you will.

Zoë has finally sprouted enough hair for almost-pigtails. She's still a little sparse in places but I got pigtails in on Sunday and she kept them in all day long. 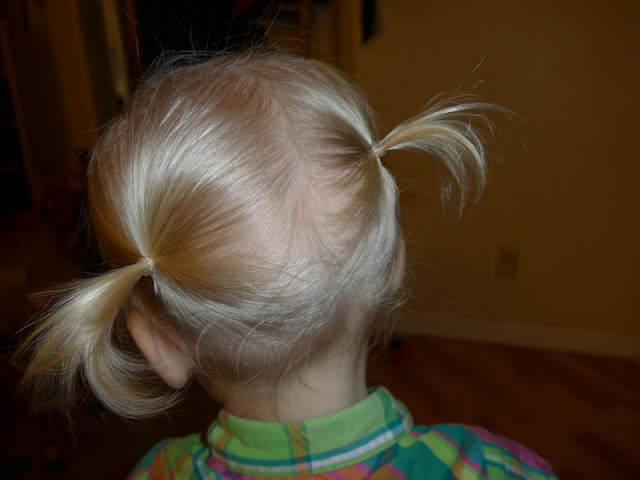 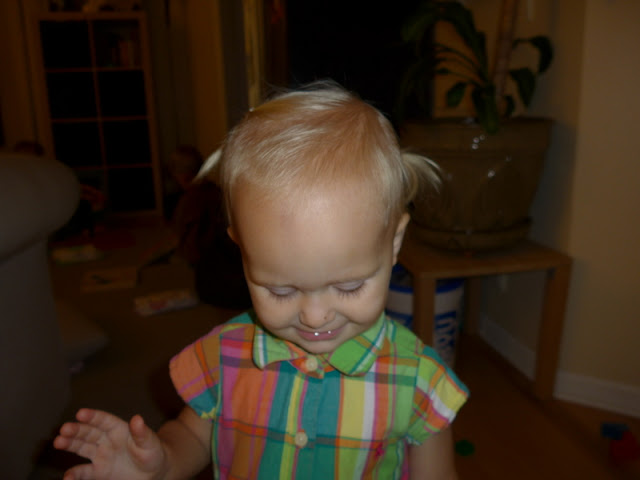 Miriam also lost a tooth on Sunday, which she was quite excited about. Our regular tooth fairy was off on vacation, which meant we had a substitute tooth fairy. I hear she had a hard time even locating the tooth (which was eventually found on the top shelf of the bookshelf?!) but she successfully collected the tooth and left a dollar in its place. 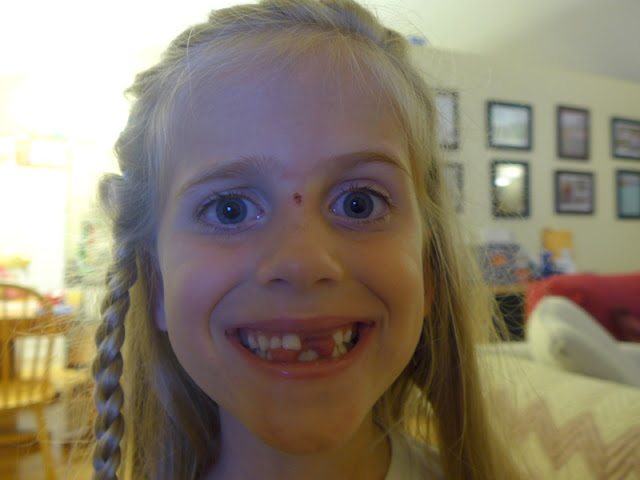 When Miriam came home from school on Monday I asked her if the tooth fairy had left her anything and she said, "Oh, I didn't even check. Let me go see!"

So apparently the substitute tooth fairy didn't have to stumble around in the dark looking for that tooth after all. She could have just sneaked in there while Miriam was at school or something. Sheesh.

Here's a picture of Benjamin giving Zoë a ride around in the dump truck: 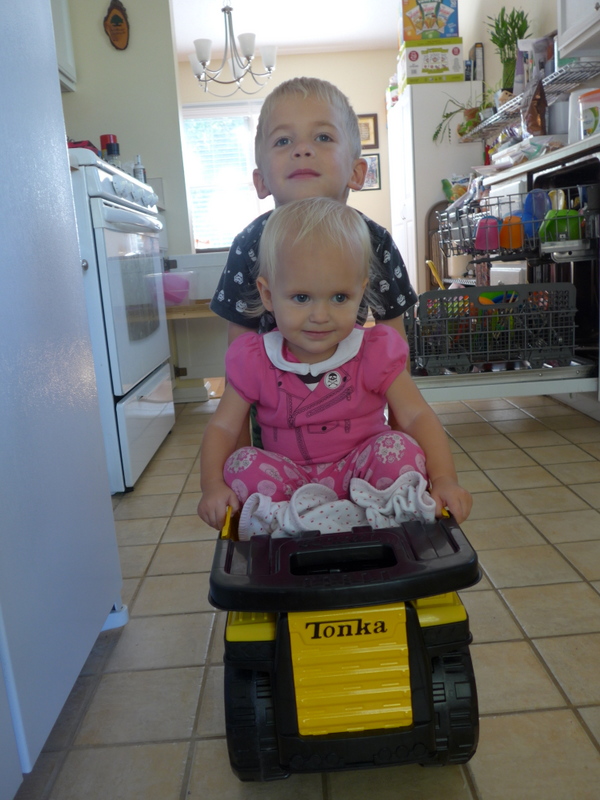 And here are a few pictures of Zoë looking at a book this afternoon. Here she is making the sign for 'duck' while quacking for me: 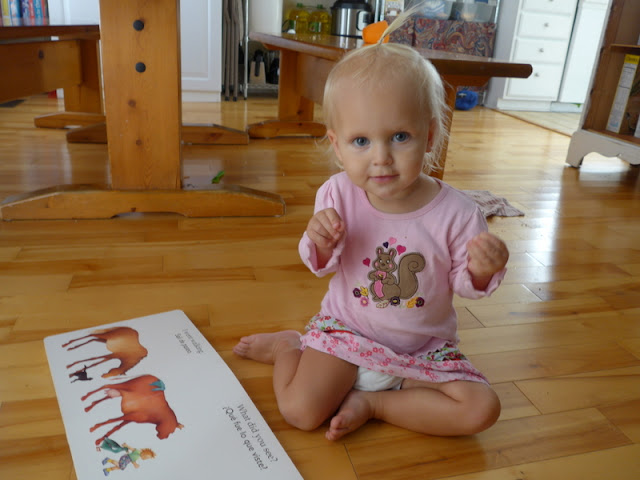 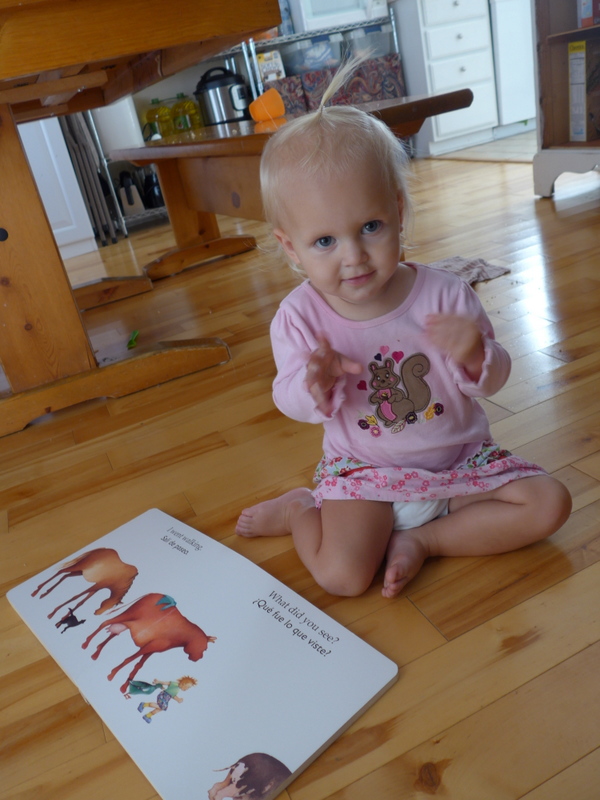 You might notice she's sporting a whale-spout ponytail on the top of her head—that was her request! She brought me the jar of baby hair elastics, pulled on her hair, screeched at me, and signed please.

So I got out a hair elastic and started gathering her hair into a ponytail.

But when I was finished she was so proud and she waved at her reflection in the mirror. 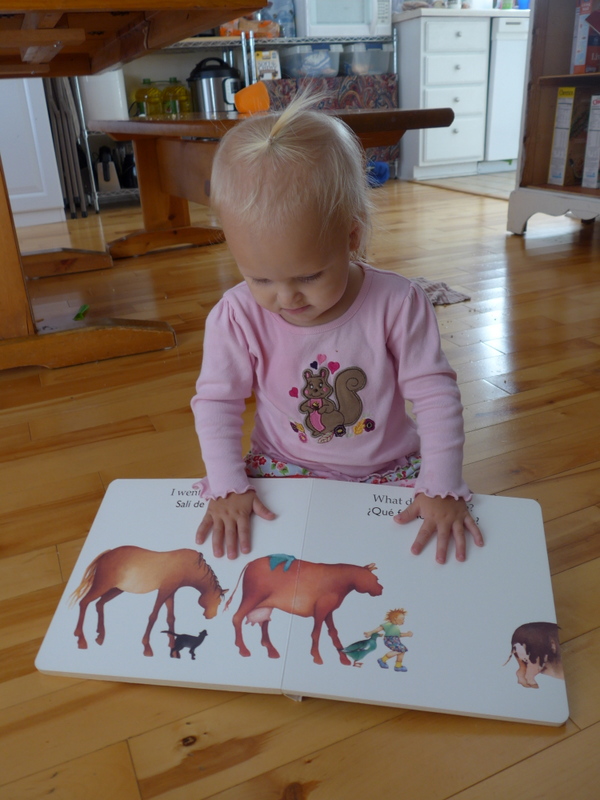 When Andrew came home to pack he pulled out his suitcase and explained to Zoë that he was going to put his clothes inside and, much to everyone's surprise, Zoë proceeded to strip down to her diaper. She took off her shirt (which I didn't even know she knew how to do) and managed to wiggle out of her skirt and then she brought them to Andrew (since he was putting clothes into the suitcase, I guess).
Posted by Nancy at 11:32 PM