We visited Amanda's ward in the morning and the primary children gave their primary presentation. It was fun for the kids to watch since they'd just given theirs the week before. The primary in Amanda's ward is so small that we threatened to make the kids go up to sing with them (but our kids did not like that idea at all (I don't know why—they knew all the songs!)).

We stopped by For Ward on our way home, which Rachel thought was funny. She's always after a good pun and stopping by Fort Ward on a Sunday after visiting Amanda's ward was just too funny.

We didn't stay long, but we did play on a few more cannons... 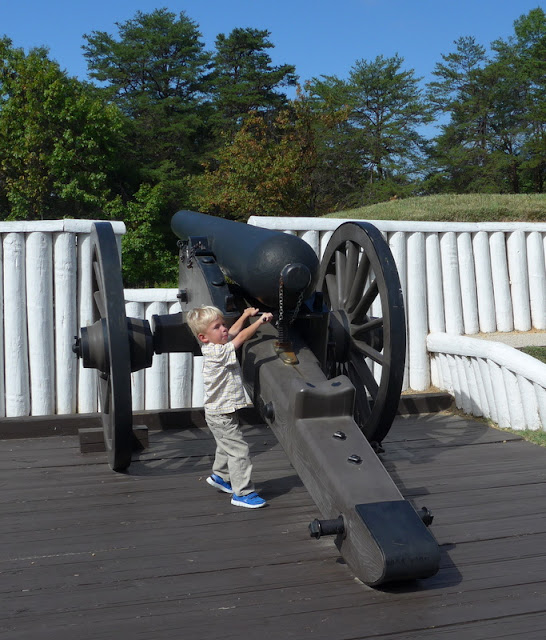 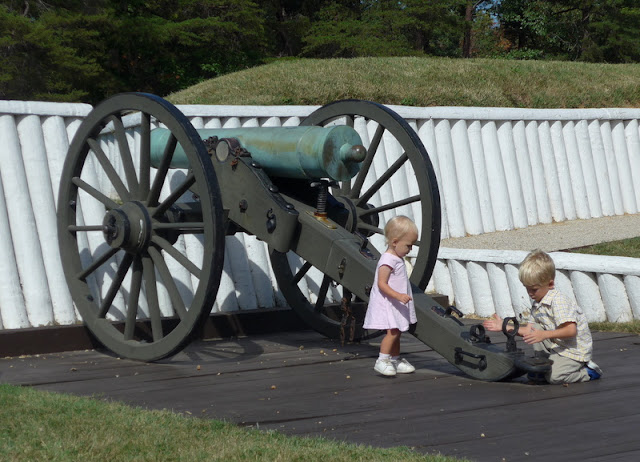 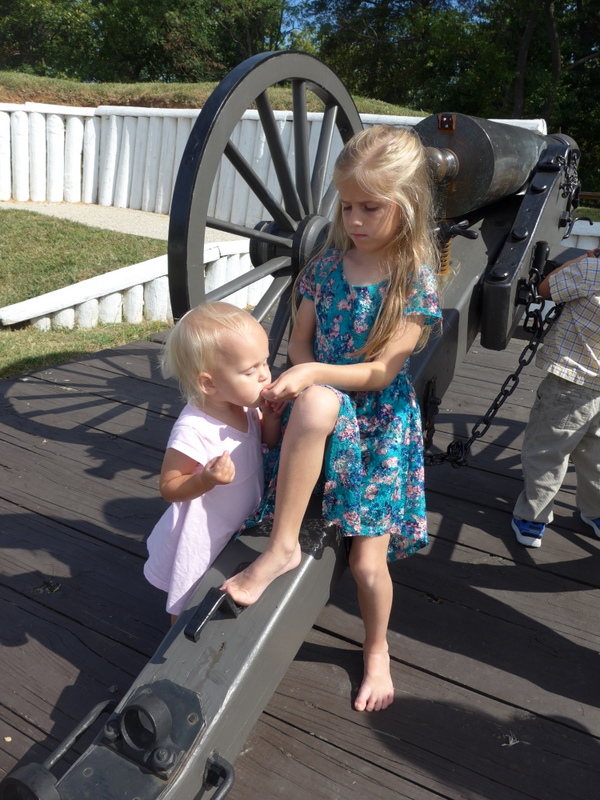 ...and did a quick walk-through of the museum on site, which had a display about Mercy Street and the actual Mansion House Hospital, which we then quickly added to our itinerary (having just watched the show, you know).

We then had to run back to Amanda's house for a quick change of clothes and some provisions. Miriam's Sunday shoes bit the dust (for the second or third time). They were her dressy sandals and I've been fixing them all summer long. She's about to the point where she doesn't want to wear sandals to church anymore (because it's too cold) and they won't fit her next year so we finally just tossed them. She wasn't too happy about hobbling around barefoot while we were at the fort—but we were kind of enough to let her change clothes before carrying on with the rest of our day, so there's that!

We met up with my friend Carrie and her kids at the temple visitor's center. Carrie worked for my mom at BYU and I worked for Carrie's dad, which worked out pretty well, if I do say so, myself. 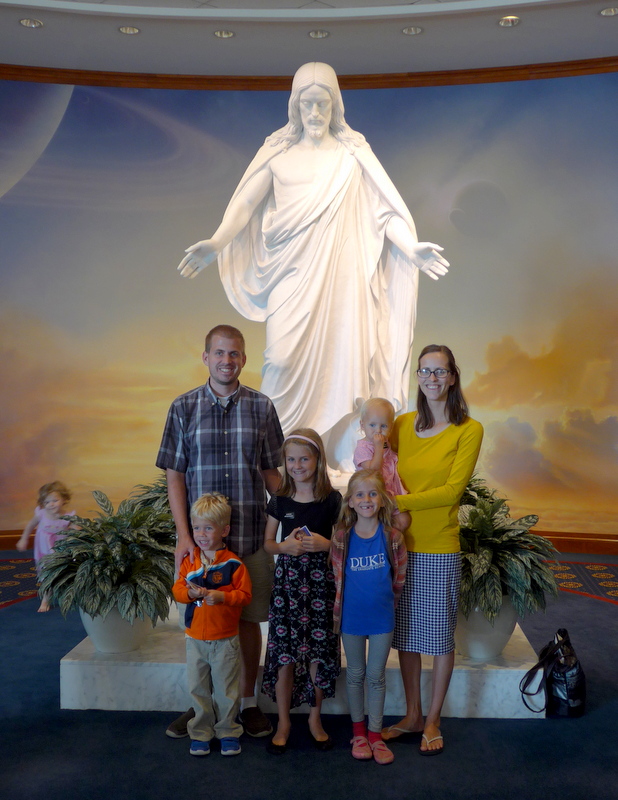 He and Benjamin were like two peas in a pod. They met each other and were instant best buds, immediately setting off to create mischief together.

"I am so happy we get to spend time with J today," I told Carrie.

You see, Carrie worked for my mom at the library and I worked for Carrie's dad at the library. Carrie and I were librarians, the children of librarians. We are both rather quiet individuals. Yet we somehow managed to be blessed with little live wires. How did this even happen?!

While we were sitting on the couches discussing this, our boys were off at one of the children's kiosks playing a game in what we, frankly, considered pretty decent behaviour, while our little girls played by our feet (Andrew was off with Rachel and Miriam).

A senior missionary came up to us and said, "Sisters, we are trying to teach this couple about the temple, if you wouldn't mind keeping your children under control."

He left and Carrie and I exchanged "eek" faces before getting up to talk to our boys about lowering their voices and reminding them that we should be behaving reverently.

In our opinion, the boys did change their behaviour for the better. We returned to our conversation, trying to wrangle our little girls while also getting caught up with each other's goings on but soon were approached by the same missionary again.

"Sisters," he said sharply. "May I remind you that I asked you to control your children? This is a non-member couple we are giving a lesson to and I don't think they appreciate all the noise your children are creating. May I suggest you explore elsewhere?"

I picked up Zoë. Carried picked up L, who started throwing a spectacular fit. She didn't want to leave the children's kiosks. She wanted to keep playing.

"Well," Carrie muttered to me as we walked away. "If you ask for a fit you're going to get a fit."

Carrie and I were a little grumpy about being asked to leave and noted that (a) the missionary had no way to know if we were both members (or even all member families—Andrew's razor battery ran out (it got turned on in the suitcase so he didn't shave the whole time we were in DC) so he wasn't exactly the clean-shaven, crisp-white-shirt-and-tie husband you'd expect), and (b) there were several unoccupied "discussion" rooms that were pleasantly child-free where they could have moved their conversation, and (c) if they can't handle the noise of four little children doing their best to behave appropriately then I pity the day they attend an actual gathering of Mormons.

I think the missionary felt badly afterwards, and came to find us bearing "junior missionary" stickers and Article of Faith cards for the children. That made us feel a little bit better.

Still, when our boys decided to start a game of hide-and-seek, we decided it was time to move this party outside.

I fail to see how we could be considered distracting at all... 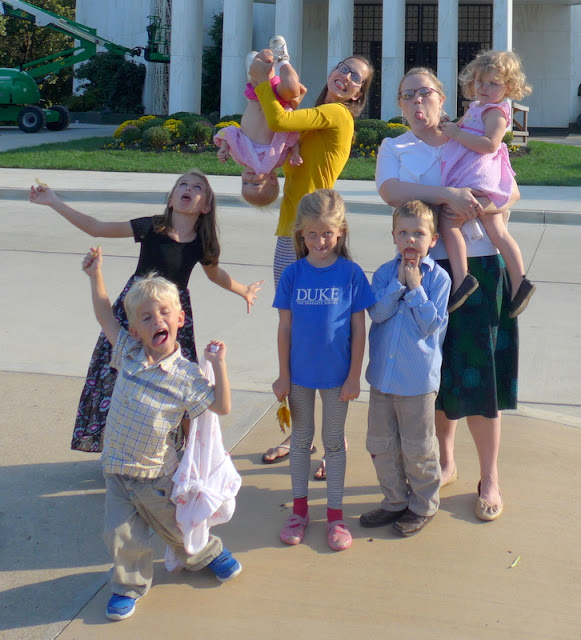 We went for a walk around the temple, which had been closed for renovations for the past several weeks. They still had some trucks littered around the grounds, which the kids thought were cool. 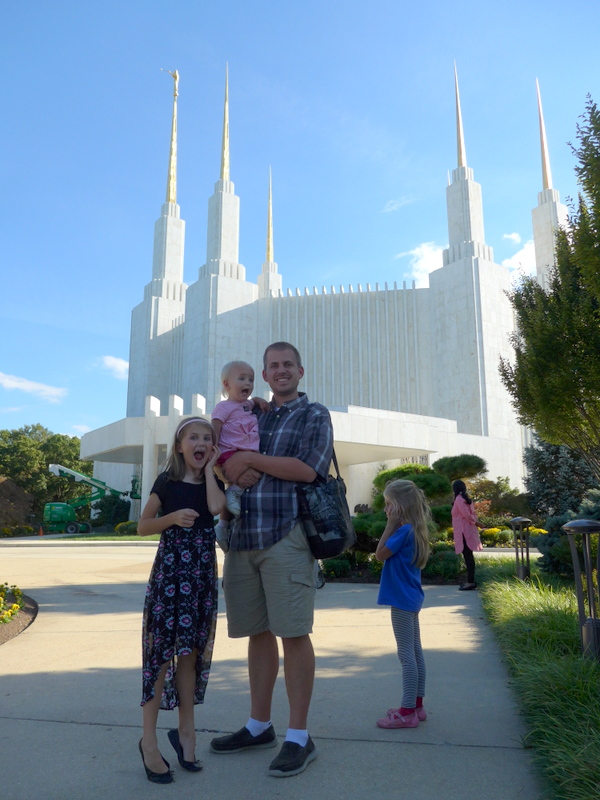 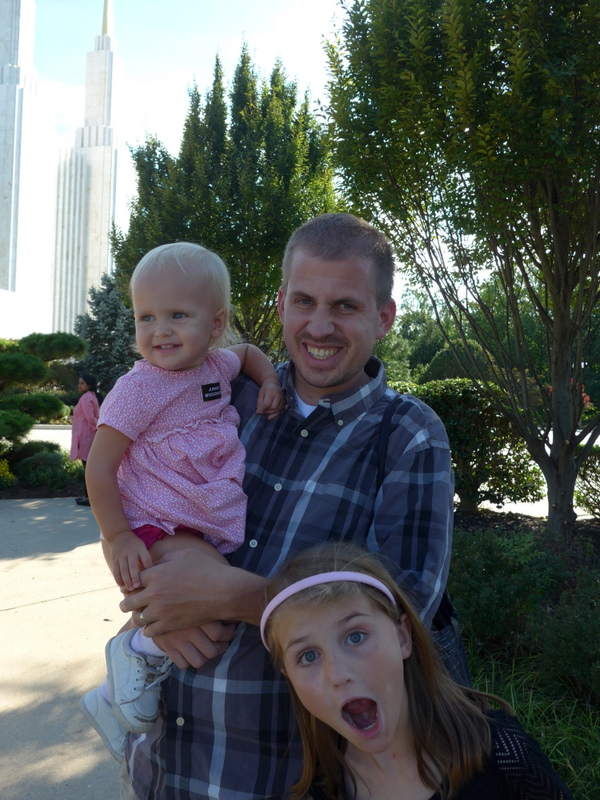 Poor J never quite figured out Benjamin's name. At one point he asked, "Hey, where'd that little name-changer go?"

"Yeah," J keenly observed. "Sometimes they call him Benjamin and sometimes Ben or Benji, but he told me his name was George Washington." 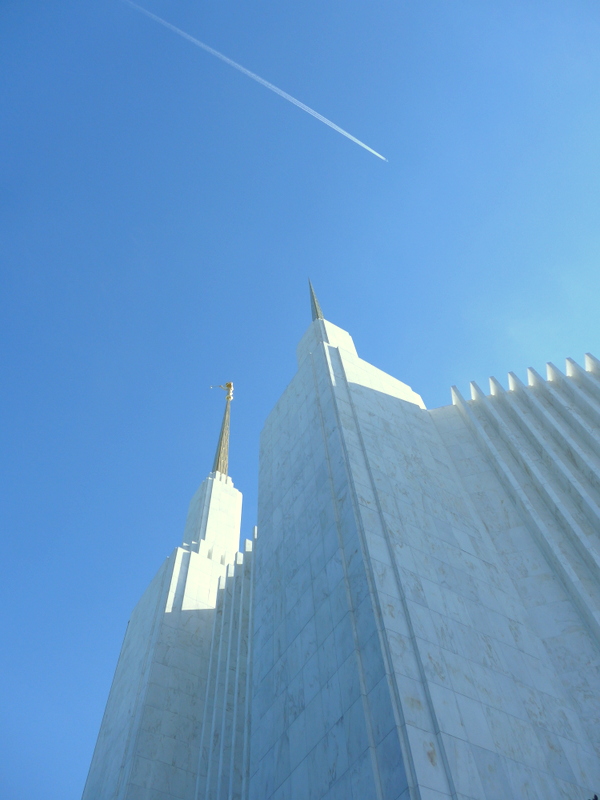 Here are the kids exploring some of the doors: 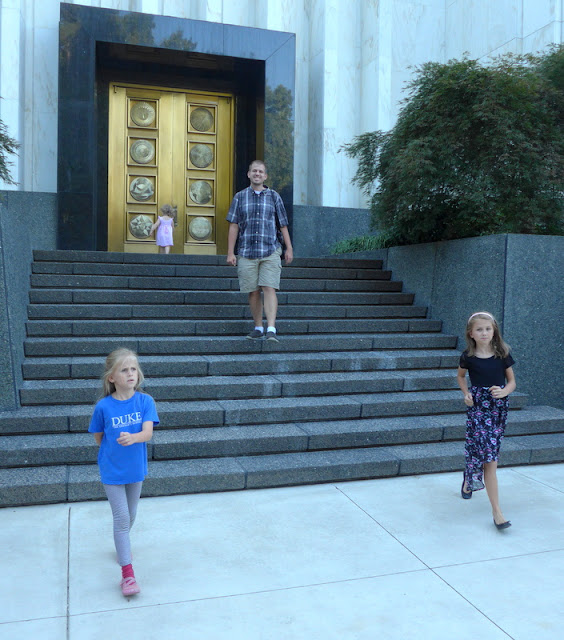 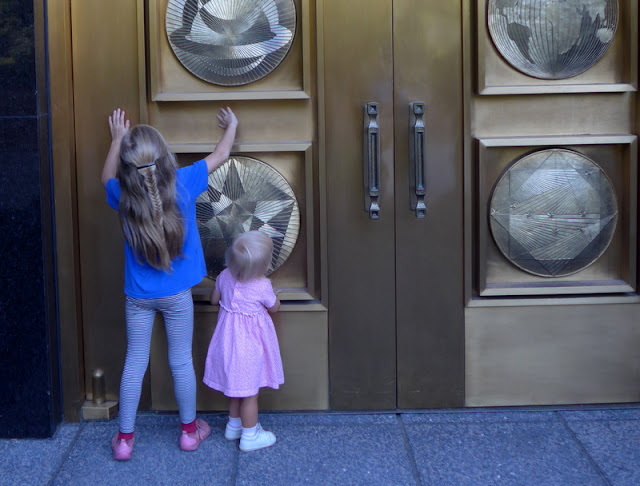 Zoë tripped at some point (several points) in our walk and I just scooped her up and carried her until she recovered from her fall. The last time I picked her up, however, she never quite recovered. She kept whimpering "Ow, ow, ow!" and lifting up her knee to check out her leg, so eventually I also decided to check out her leg. Her poor little knee was badly scraped and was bleeding all over the place. I had blood splotches on the side of my shirt from my armpit down to my hip from her little leg pressing into me! 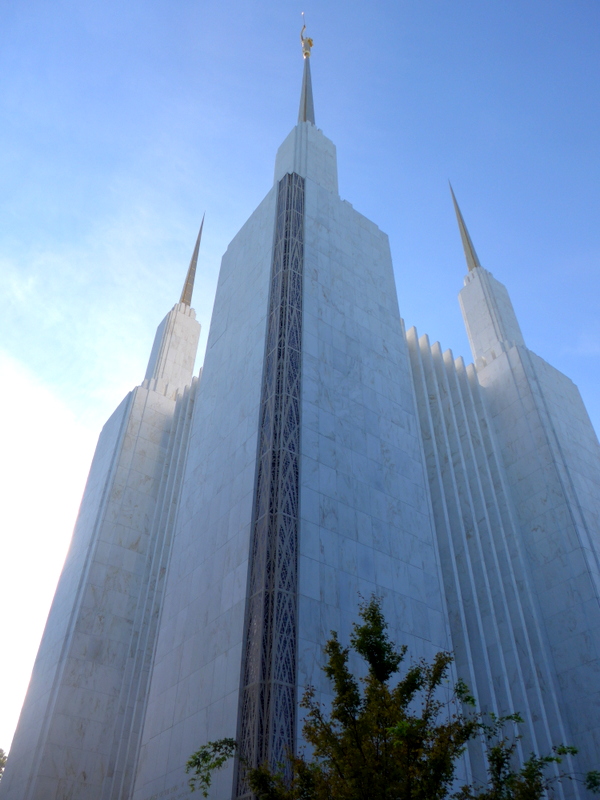 After saying goodbye to Carrie and her crew... ...we stopped by the visitor's center again to see if we could bum a bandaid off the missionaries. We were much better received this time—sister missionaries flocked to us and asked where we were visiting and what they could do for us and when I showed them Zoë's knee they were falling all over each other trying to get to the first aid kit first. They were all super friendly, just the way missionaries should be! 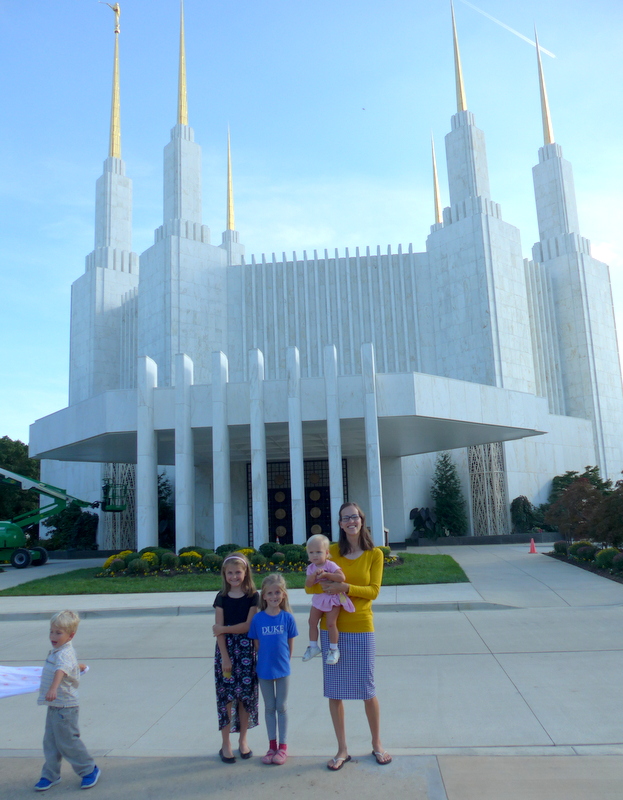 The girls helpfully noticed that my shirt was a rather autumnal shade and matched the fallen leaves almost perfectly. They gathered a few from the sidewalk to hold over all the bloodstains from Zoë. It was pretty funny! 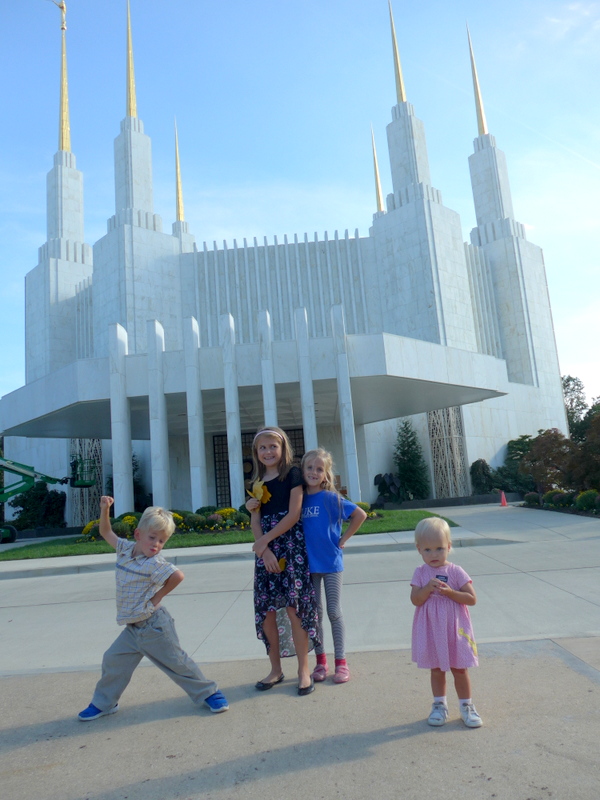 We had dinner with some friends from our ward here—the Doyings. You might remember them from other blog posts, like the time that we called them at 6:30 on a Saturday morning to see if they could watch our kids while we had a baby (and then when we called to tell them that Zoë had been born they told us that they had an announcement to make as well: they'd managed to lock themselves out of the house). They were good babysitters and wonderful friends!

While we were waiting for Josh to come find us in the parking lot (which had ample visitor parking, thank goodness) the kids were excitedly guessing which floor they lived on. Eventually they settled on all wishing together that the Doyings lived on the top floor. When Josh found us we were all looking up and pointing.

"Is Kaitlan waving to you?" he asked.

"No," I said. "We were just counting how many floors there are. The children are all hoping you live on the top floor."

"Well, surprise!" Josh said. "We do! And there are thirteen floors. Let's go!"

And he led the kids on an exciting adventure to find the apartment (we really, really miss having the Doyings as babysitters). They'd made a delicious soup and cornbread muffins—the first hot, sit-down meal we'd had in days.

"When we were travelling," Kaitlan told us, "My mom always said we could pick two meals a day, but that was it."

"That's exactly what we've been doing!" we laughed—eating breakfast, skipping lunch, and splurging on dinner.

It was fun to get to visit with them again! The kids enjoyed the view from their window (they can see the Washington Monument) and breaking in their couches by bouncing on them. Their couches didn't actually fit in the elevator so when they moved in—in the late spring (just a week or so after Zoë was born, actually) when it was already quite hot—they carried the couch up thirteen flights of stairs.

"They might never go back down," Kaitlan admitted. "We'll just have to sell them with the apartment or something."

The Doyings suggested adding two things to our itinerary: Gravelly Point (which we did) and the National Postal Museum (which, unfortunately, we didn't get around to). We hit up Gravelly Point to watch a few planes land before heading back to Amanda's (and, thanks to technology, we got to video call with both sets of our parents as we were driving there). 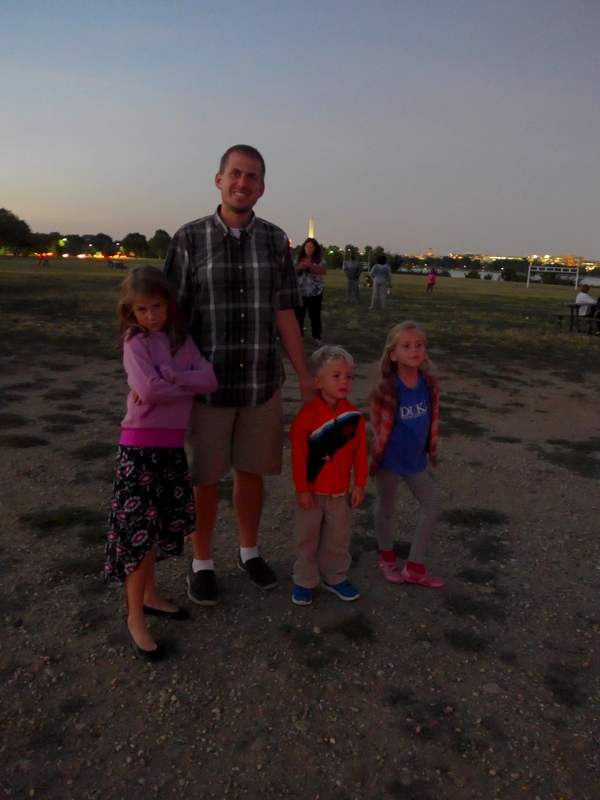 It was really pretty cool to have the airplanes zoom so close overhead.

Back at Amanda's house we put the three older kids to bed and then made plans for the morning and chilled with the puppy until Zoë was ready to go to bed: 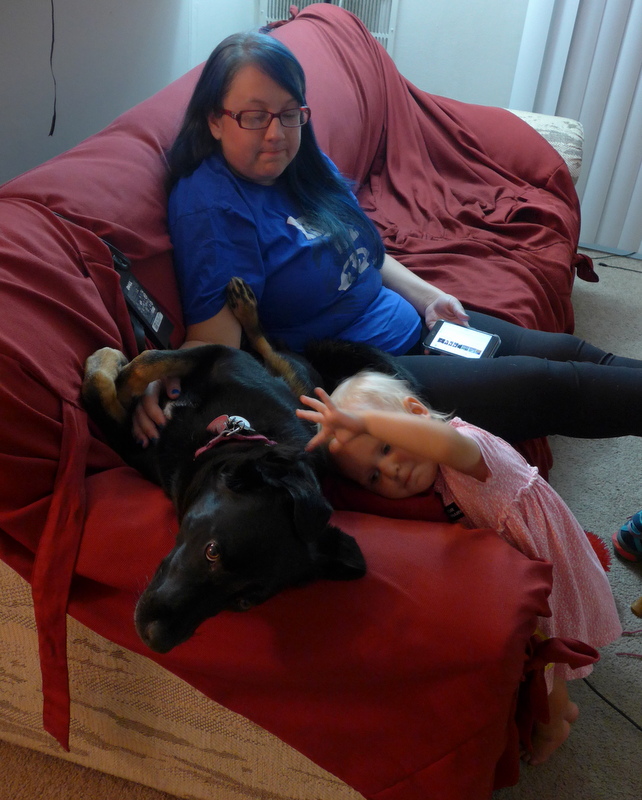 The puppy was kind of a big hurdle for deciding where to stay in DC. We're still on a couch-surfing budget, so hotels were out, and when we'd stayed with Amanda the first time she didn't have a dog yet. But then she got a dog and she knows how I feel about dogs (but assured me that Malcolm was a very well-behaved puppy). And he really is. He's quiet, calm and sweet, and we didn't bother each other at all (well, maybe a little bit (I know he and Zoë made each other nervous)).

Originally we'd been planning on driving home on Tuesday, but Andrew had a big presentation on Wednesday that he needed to review and Zoë, especially, seemed to be longing for home (she threw so many fits while we were out and about) so we decided to head home a day early.

Monday morning Amanda generously took us on a walking tour of Old Town Alexandria to bring our trip to a close, which I'll write about tomorrow (hopefully).
Posted by Nancy at 12:34 AM