We had another go-go-go Saturday, of course. Rosie and Zoë and I went to Miriam's soccer game while Rachel and Andrew went to Benjamin's. It was supposed be our last week of soccer but our season was extended by a week (because we missed so many games due to bad weather (Hurricane Matthew, for example). Miriam's team went ahead with their final celebration anyway, since it had been planned before we knew for certain the season was going to be extended.

Here's Miriam (second from left) with her teammates: 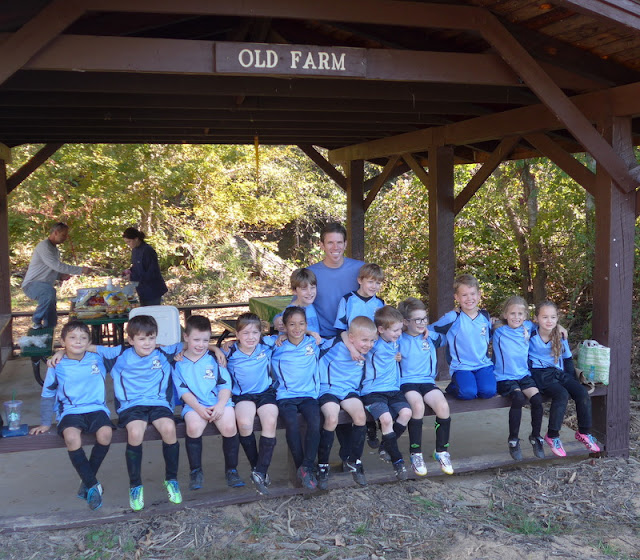 Her award was "most improved player." She really did improve by leaps and bounds this season!


After soccer and celebrating, we went home for some lunch and play time (while Andrew and Rachel headed off to Rachel's game). Here's Rosie playing LEGO with Benjamin: 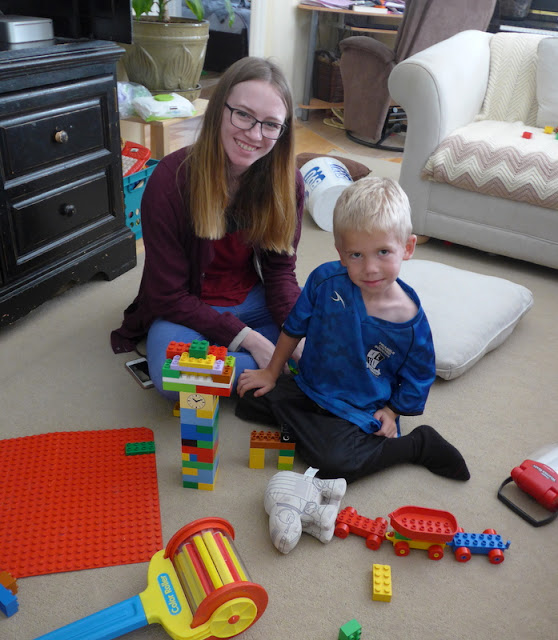 I'd always dreamed of having a bunch of little cousins for my kids to play with and had visions of them all crawling around on the floor building block towers like this. I just didn't always imagine the age gap! I mean, I knew the age gap was there because I've been an aunt for most of my life. I just figured/hoped that by the time I started having kids there'd be more cousins around...but so far that hasn't happened. So I told Rosie I needed to get a picture of them playing on the floor together to fulfill all my dreams of little cousins playing together.

(On Andrew's side of the family we really have quite a few little cousins (finally). For a long time it was just my girls and Kayl. But then I had Benjamin and then everyone decided to start having babies, babies, babies and now there are six little cousins under the age of three.* Ka-plow! So there's not really an age-gap problem there. We do, however, suffer from a persistent geographic-proximity problem.)

*The newest one was born on Friday (which happens to be Kayl's birthday—can you think of a better birthday present than sharing a birthday with your brand-new cousin?!); post forthcoming.

Later in the afternoon Rosie took all the big kids to the park so that Zoë and I could get a nap in, which was lovely. Benjamin made her push him in the swing the whole time (she did a ton of swing pushing while she was here). When they came back and Zoë and I woke up we headed to West Point on the Eno to visit the grist mill. 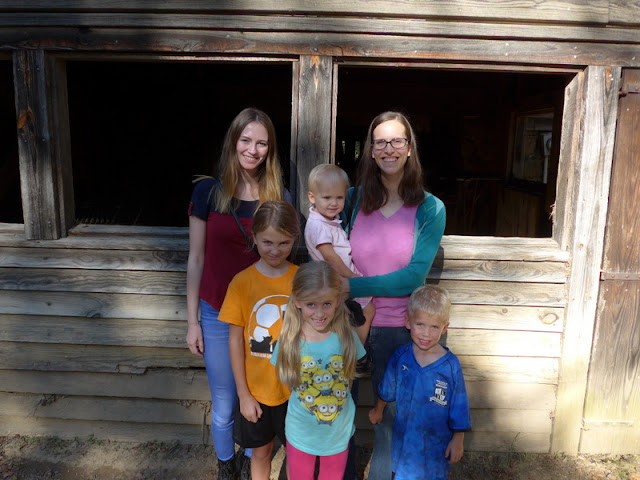 It was fun to look at all the machinery. 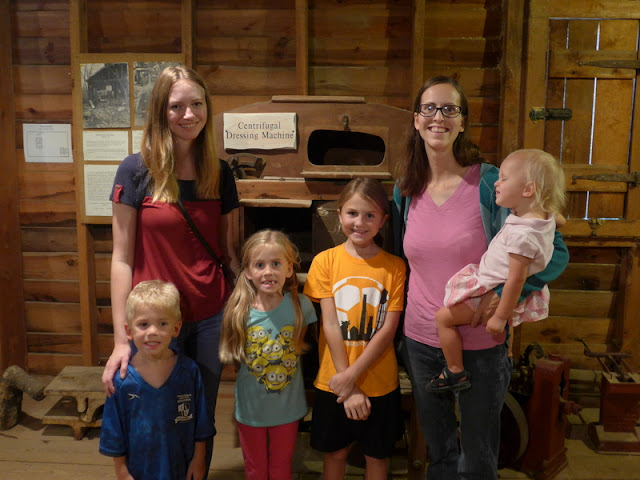 We went upstairs, which I don't think we'd ever done before, where a lot more machinery was on display. The floor was a little unsettling because you could see between the floorboards in places. There was even a big (empty) knot in one of the boards and we could look down to the lower level. 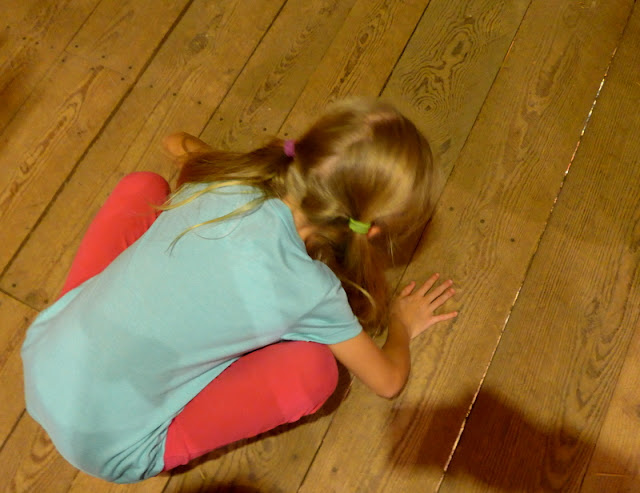 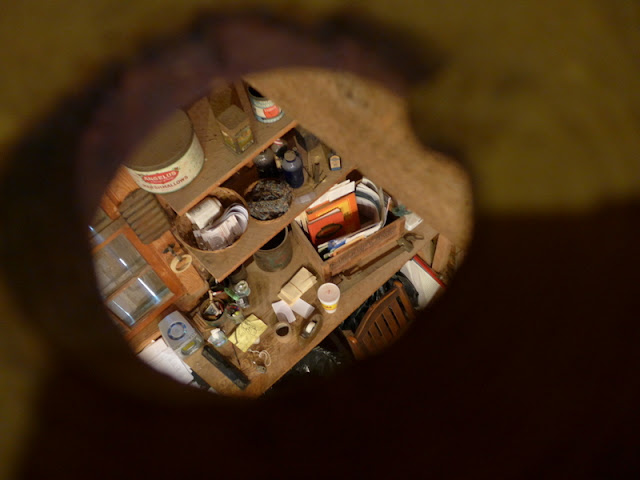 Here's Benjamin being so brave and standing right on that hole: 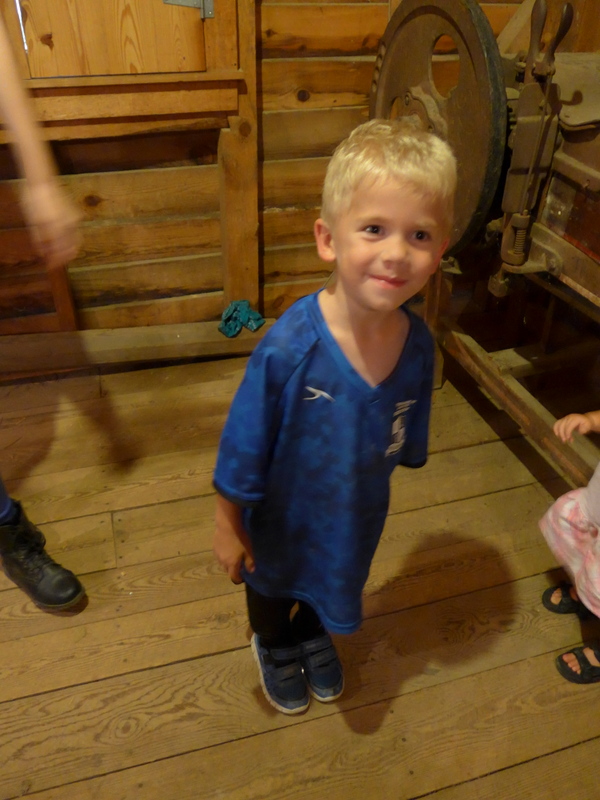 And here he is slowly making his way down the scary staircase: 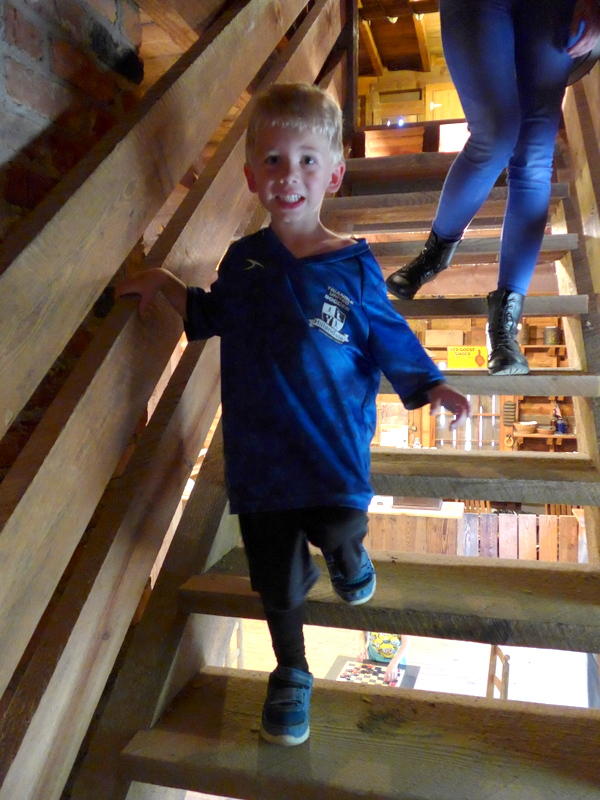 Andrew and the girls went outside but Benjamin wasn't finished exploring the mill yet. He went around touching everything and spouting off question after question. His most frequent question was, "What's this?" 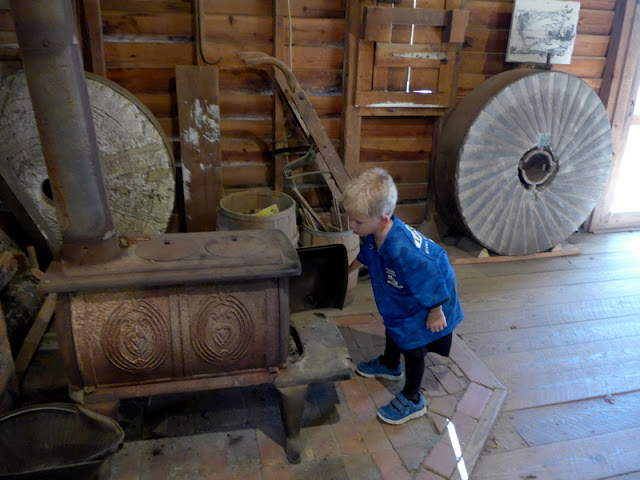 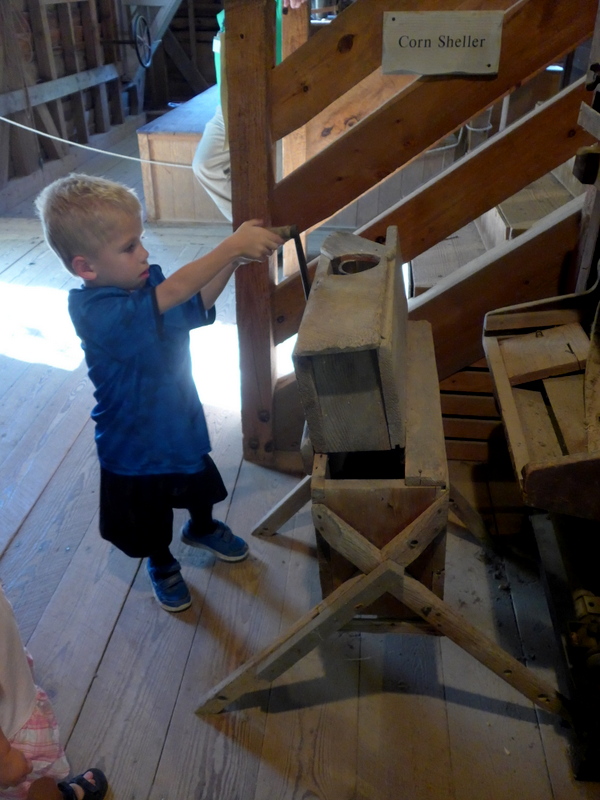 Zoë followed him around doing everything that he did. 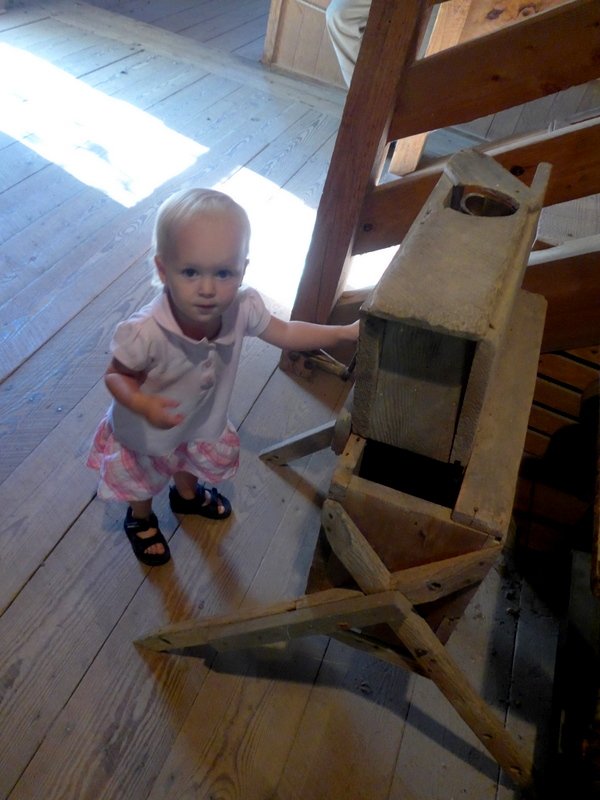 Soon the man running the mill started following Benjamin around and answering all his questions. He even let Benjamin turn the wheel that opens the dam to turn the water wheel that powers the mill: 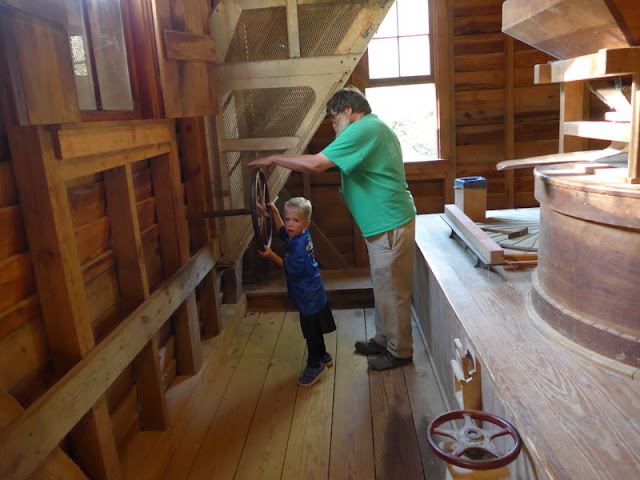 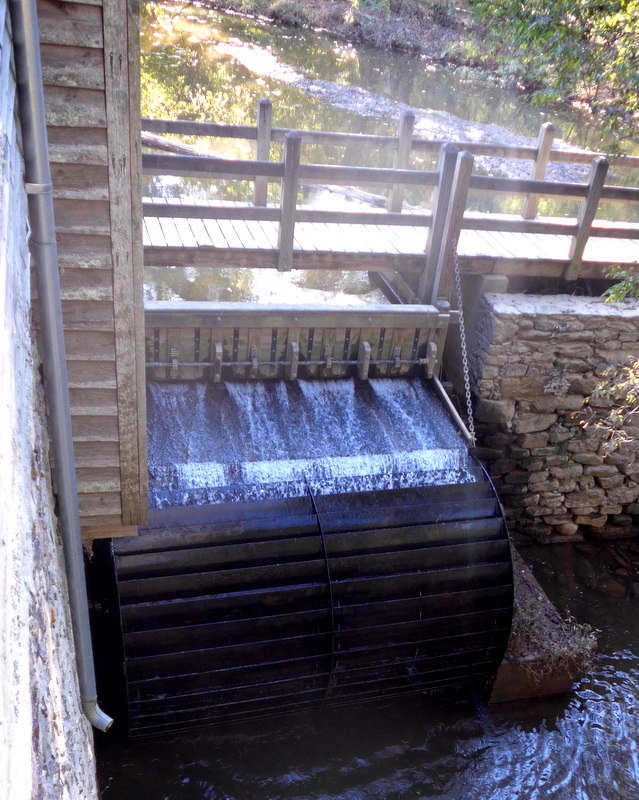 We couldn't leave it running very long, however, because the outlet to the river is still backed up with debris from Hurricane Matthew and when there's too much water below the water wheel it starts running sluggishly.

There was a bit of flooding in the mill, about up to the windows that you can see behind Rosie: 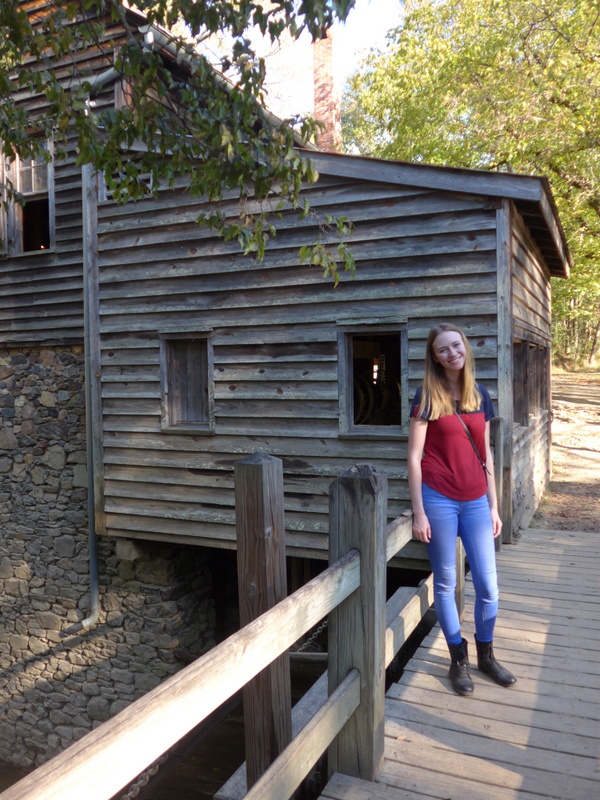 It filled the bottom level of the mill with silt (not the store part, which is a bit higher up, but just that lower level behind Rosie): 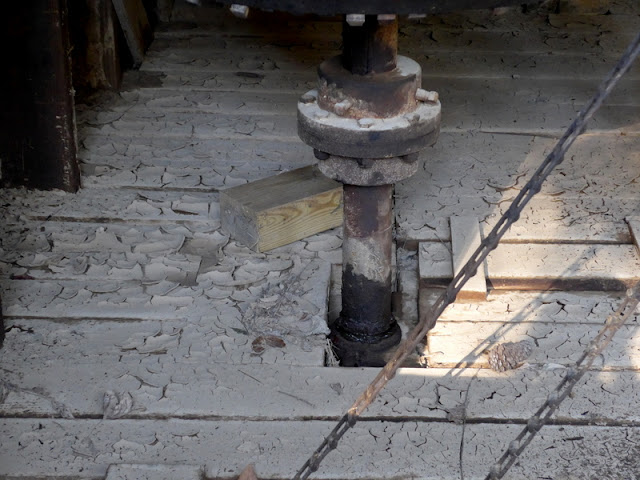 It also washed away the steps of the nearby footbridge and a few other minor things, and leaving behind it a bunch of debris.

Since we couldn't cross the footbridge to look at the river we walked out to the...bigger footbridge...overlooking the river: 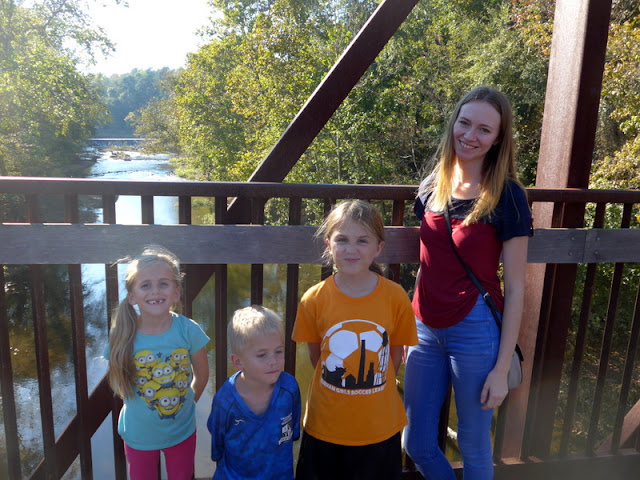 And then we headed to Duke campus so that Rosie could pick up a souvenir at the bookstore. When we were getting out of the van Andrew said, "Campus is sometimes called a gothic wonderland."

"You'll see," Andrew said but then, because he can't stand letting a question go unanswered blurted out, "It's because of the architecture!"

He's working on letting questions sit unanswered to allow the questioner to come to the answer themselves...but it's hard.

We had a lovely walk through campus. Miriam collected a bunch of red maple leaves for me. 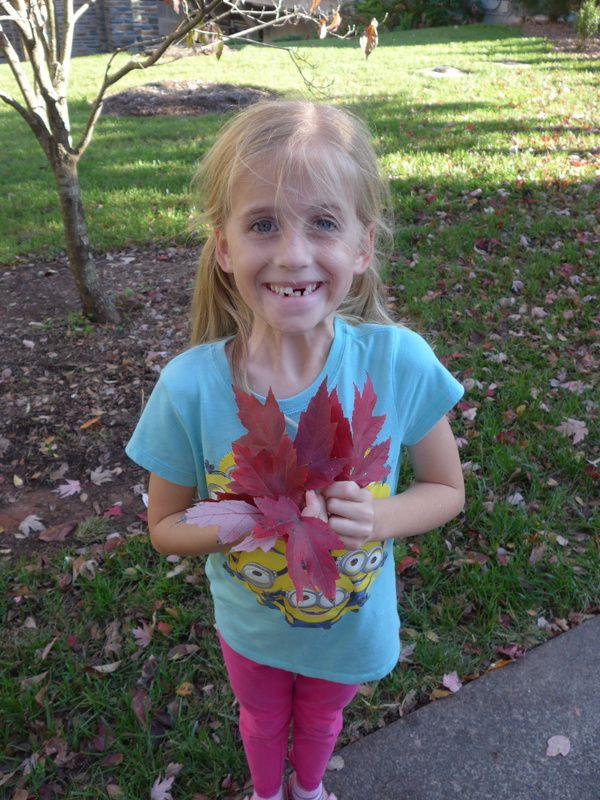 The chapel was closed for a wedding, unfortunately, so we weren't able to go inside. It ended up being fine though because (a) the outside is impressive enough and (b) we got a notification on our phone saying that if we left now we'd be on time to drop Rachel off at her friend's birthday party (which we'd completely forgotten about). We decided to head out so we could get Rachel to that party, but, first, here are some pictures of us with the Duke Chapel: 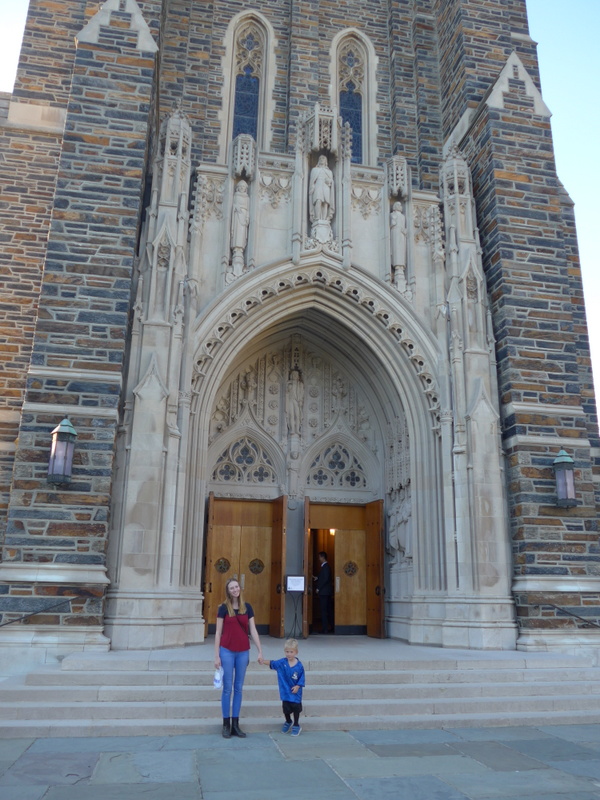 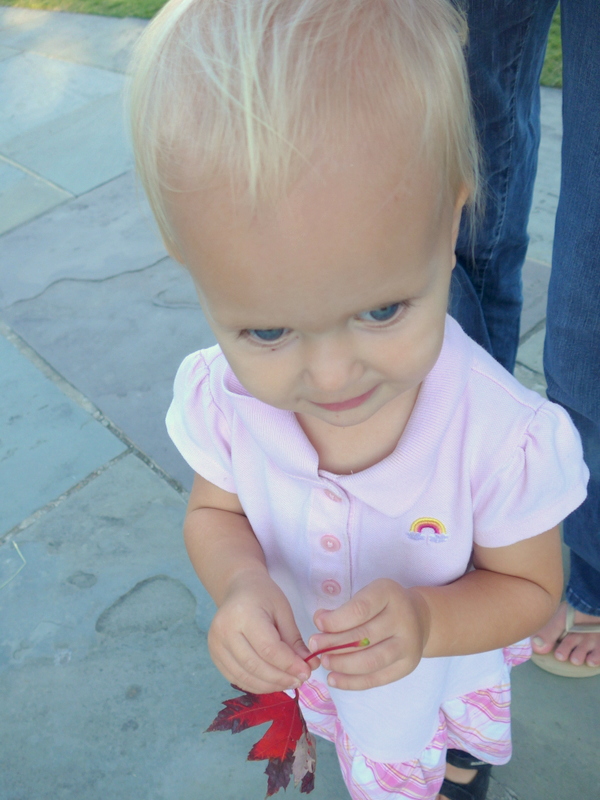 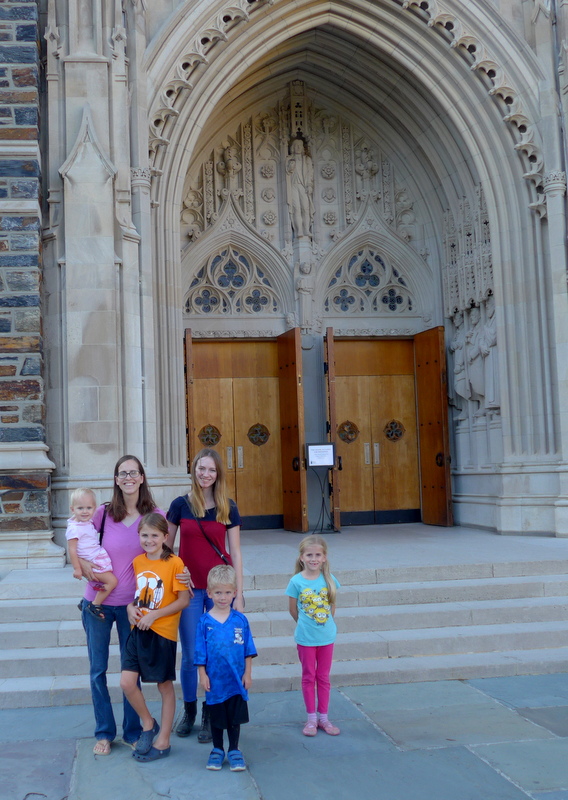 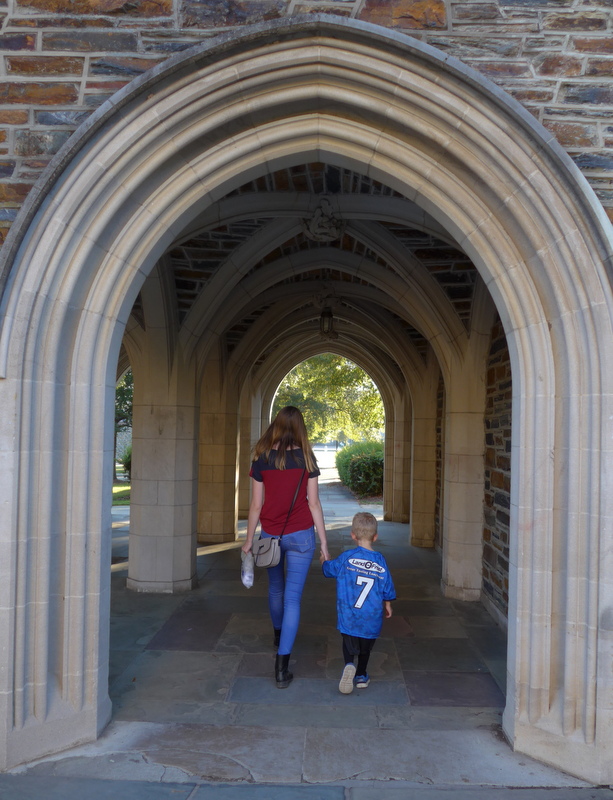 It was another good—and busy!—day with Rosie. This weekend really flew by!
Posted by Nancy at 10:17 PM